Your Guide To The Kree-Skrull War, The Cosmic Conflict That Captain Marvel Could Bring Into The Spotlight

Pretty much since the original Avengers movie, Marvel movie fans have speculated that the cinematic universe could slowly build toward the most infamous interstellar skirmish of Marvel’s comic history: the Kree-Skrull War.

It’s taken a while, but Captain Marvel looks like it could finally be the film to do it—so here’s what you need to know.

The Avengers went a step further with the addition of characters like Korath the Pursuer and Ronan the Accuser.

But now, Captain Marvel is blasting the path toward one of the biggest cosmic scraps Marvel Comics has ever seen by actually introducing not only more of the Kree people, but the whole other side of the conflict: the sinister shapeshifting Skrulls.

The Kree-Skrull War is actually technically two things—there’s the actual war itself, which spans millennia in the background that has had an impact on corners of the Marvel Universe beyond the realms Carol is concerned with, and then there’s the 1971 comics event of the same name, by Roy Thomas, Sal Buscema, Neal Adams, and John Buscema, that ran in the Avengers series and was one of Marvel’s earliest and most influential cosmic event sagas.

That event will likely not be a direct inspiration for Captain Marvel’s story with the Kree and Skrulls, but we’ll explain that first before getting into the mythos that’s much more likely to form the basis for what the movie sets up. 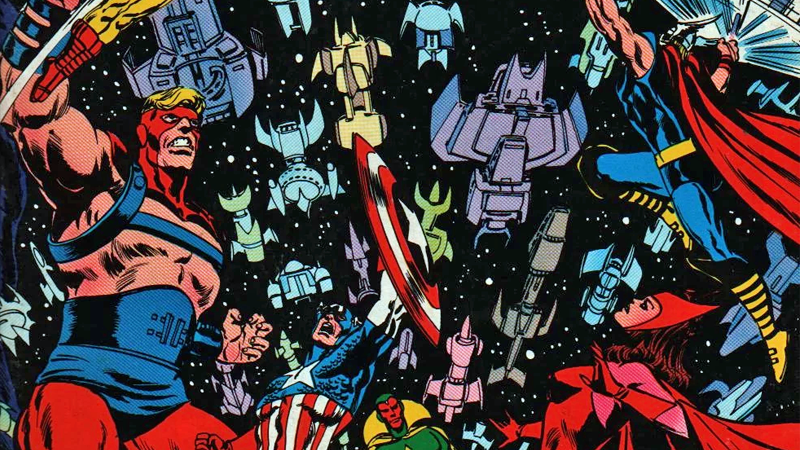 Beginning in June 1971, the Kree-Skrull War storyline included a whole bunch of superteams like the Avengers, the Inhumans, and the Fantastic Four. It included several plotlines interwoven around the return of Mar-Vell, the Kree warrior who was the original Captain Marvel, years before either Carol Danvers (or Mar-Vell’s actual successor in the role, Monica Rambeau) took on the title.

At the time, Mar-Vell had actually spent years trapped in the alternate dimension known as the Negative Zone, where he battled Annihilus, got doused with lethal radiation that threatened to kill him and…had a kid with a Skrull princess?

He was busy, but really, that’s not what matters: Mar-Vell escapes, returns to Earth, and is promptly taken in by some of the Avengers.

It’s here the shit hits the fan and a bunch of different story threads spin out. First, the Avengers find themselves fighting the now-outlawed Ronan the Accuser as he attempts to revert the Earth back into a prehistoric state to use it as a staging ground for the war against the Skrulls. That battle sees Mar-Vell’s alien identity exposed to the world and the formation of the Alien Activities Commission under Senator H. Warren Craddock, a thinly-veiled take on the real House Un-American Activities Committee that investigated private American citizens the government believed to be Communist sympathizers or otherwise disloyal to the United States.

Refusing to hand over Mar-Vell during a hearing with the AAC leads to the Avengers’ reputation being tarnished in the public eye, and even temporarily sees Earth’s Mightiest Heroes disbanded—only for a bunch of the Avengers and Mar-Vell to be captured by a group of Skrulls, who want Mar-Vell to build a doomsday device called an Omni-Wave Projector for them to use on his own people, and whisk him off-Earth. 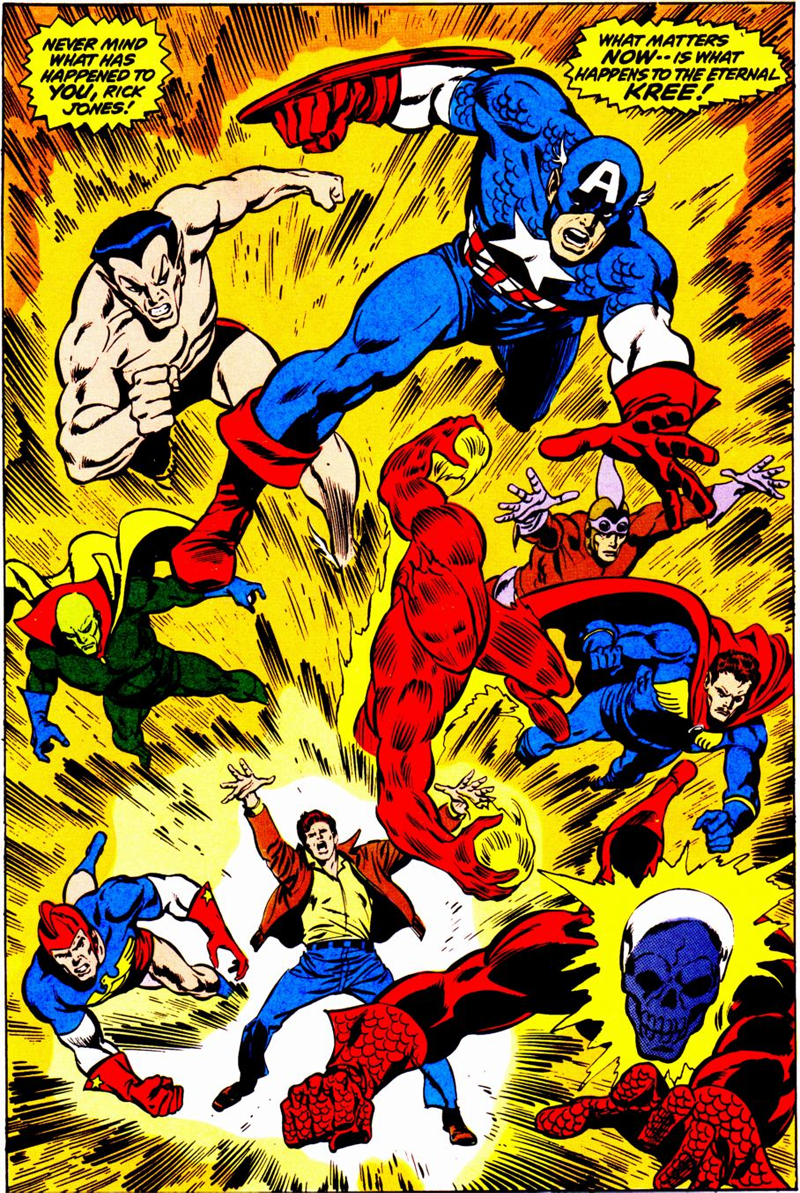 After a short sidestep into the realm of the Inhumans—where the Avengers help Black Bolt deal with a coup attempt by his brother Maximus, secretly working with the Kree to overthrow Black Bolt in exchange for offering up the Inhumans as soldiers in the Kree-Skrull War — the Avengers head to space to rescue Mar-Vell. But first, he’s forced to build the projector, which opens up a portal to the Negative Zone and sucks in Mar-Vell’s human ally Rick Jones (did I mention Rick was with the Avengers? Look, a lot is going on in this story!).

In the Negative Zone, Rick encounters the Kree’s ruler, the Supreme Intelligence, and not only learns about the long and bitter war between the Kree and the Skrulls, but unlocks his own superpower, known as the Destiny Force, which basically lets him summon astral projections of classic Marvel heroes like the original Human Torch and Namor. Rick uses the Force against the Skrulls, seemingly ending the war and somehow reverting Senator Craddock back to his true Skrull form.

Surprise, the anti-Mar-Vell and Avengers guy was secretly a Skrull! The real Craddock is found and a crowd of alien-hating protesters beat the Craddock-Skrull to death, which sorts out the Avengers’ PR crisis and reunites the team when they return to Earth.

The Kree-Skrull War is cited as one of the most influential early “event” storylines in Marvel’s history, praised for its wild scope and seen as the herald of storylines like the iconic Secret War or the X-Men’s own cosmic excursions with the Shi’ar Empire. But beyond the fact it’s got the Kree, the Skrulls, and a Captain Marvel in it, it likely won’t have much impact on the Captain Marvel movie.

Although elements of it have made their way into the movie universe already—such as the burgeoning romance between Scarlet Witch and the Vision, which began in this story—there’s so much wackiness and other superteams involved it could be a while before we see any more elements work their way into the MCU.

The war itself has been a part of both the Kree and the Skrulls’ backgrounds for millennia in the lore of the Marvel universe; however, it didn’t really start with the event, even if this was where we really started learning a bit more about its origins.

In the comics, the Kree and the Skrulls have been at each others’ throats for thousands upon thousands of years, ever since the Skrull Empire – a once peaceful spacefaring civilisation that explored the galaxy offering trade and technology to other worlds — first encountered the Kree homeworld of Hala. At the time, Hala was home to two species, the Kree and the Cotati – of similar technological and evolutionary levels, the races lived in relative harmony.

That is, until the Skrulls decided to make a game out of their benevolent arrival. They decided that only one species would gain the benefits of Skrull technology and trade, and set up a competition in which some of the brightest minds of the Kree and Cotati would be sent across the stars to construct a project with supplies gifted to them by the Skrulls.

The Cotati, sent to a distant moon in barren parts unknown, built a sustainable garden in the year they were given by the Skrulls. The Kree, meanwhile, were sent to another moon—and not just any moon, but Earth’s moon, a million years ago — and built a fabulous city in an artificial environment created by the Skrulls for them to work in, an area that would eventually become known as the Blue Area of the Moon (that’ll get important later).

While the Skrulls were impressed with both efforts, they ultimately declared the Cotati the victors. And the Kree were pissed. So pissed, they promptly wiped out the Cotati on Hala and the Skrull delegation overseeing the contest—stealing the technology from the ship the Skrulls arrived in and setting about repurposing it so the Kree could launch an attack on the Skrull Empire at large. 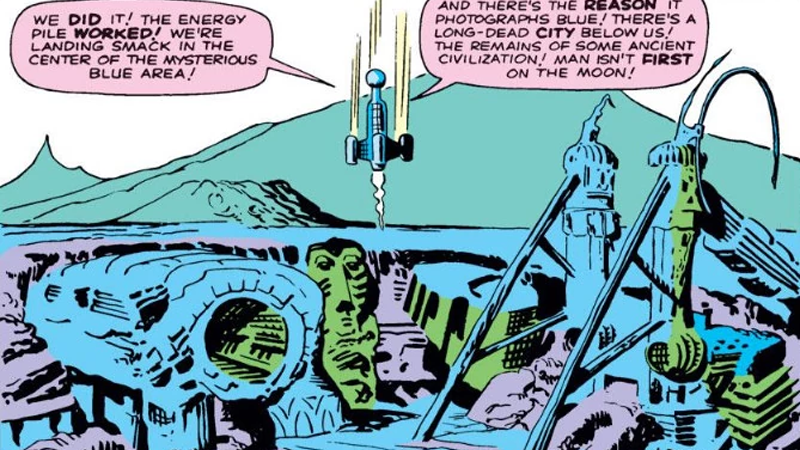 With the War in full swing, the Kree returned to the solar system the Skrulls had taken them to for their contest and established a series of outposts, including one on the Blue Area of the Moon—where they discovered sentient life on Earth and began experimenting on a group of humans to turn them into potential soldiers to be used against the Skrulls, creating the process of Terrigenesis and giving birth to the subspecies that would form the basis for Inhumanity.

In the Marvel Cinematic Universe, some of this has already come into play thanks to both the arrival of Inhumans on Agents of SHIELD and the Blue Area of the Moon (as well as Attilan, the floating city-state home of the Inhumans) being presented in the absolutely awful Inhumans TV series.

But we know Captain Marvel will at least dabble in some of the wider implications of the Kree-Skrull War, simply because we know one of the reasons Carol, acting as an operative of the Kree Starforce, comes to Earth is to hunt down Skrulls that have infiltrated the world. Whether she meets any Inhumans or even mentions them along the way remains to be seen, but given how poorly the Inhumans show went down? She probably won’t.