6 Great Hellboy Comics You Should Probably Read Instead Of Seeing Hellboy, Honestly

hellboyio9
To sign up for our daily newsletter covering the latest news, features and reviews, head HERE. For a running feed of all our stories, follow us on Twitter HERE. Or you can bookmark the Kotaku Australia homepage to visit whenever you need a news fix.

Good news! The Hellboy reboot is out today. Bad news! It’s apparently not great. Acceptable compromise news: If all the fuss got you interested in Big Red, then there’s plenty of great comics runs with the character that you can check out instead of making a disappointing trip to the movie theatre. Here’s a few of our choice suggestions.

The Hellboy comics chronology is a weird one—as weird as any comics continuity, really, but even then, over the past 25 years it’s darted about, across time and many different series and spinoff series. Thanks to omnibus releases in recent years that have begun to untangle the series’ mythos in chronological order, picking up the first Hellboy omnibus and going from there is perfectly reasonable for a first time reader. But if you want something a bit more curated, here’s just a few entries from across the Hellboy pantheon to satisfy any curiosity the build up to the movie might have instilled. 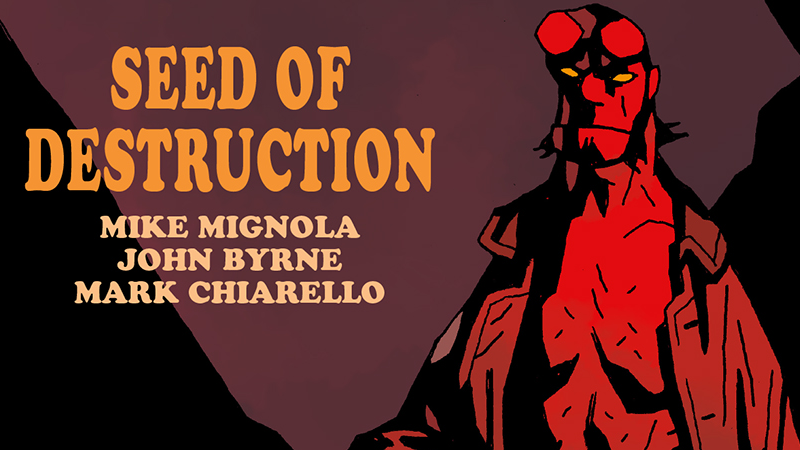 Might as well start from the beginning, right? The iconic first Hellboy story delves into his origins, but it’s primarily set well into his career as member of the Bureau for Paranormal Research and Defence, as Hellboy finds himself investigating the death of the professor that brought him in after the Nazi ritual that summoned him to Earth as a child. 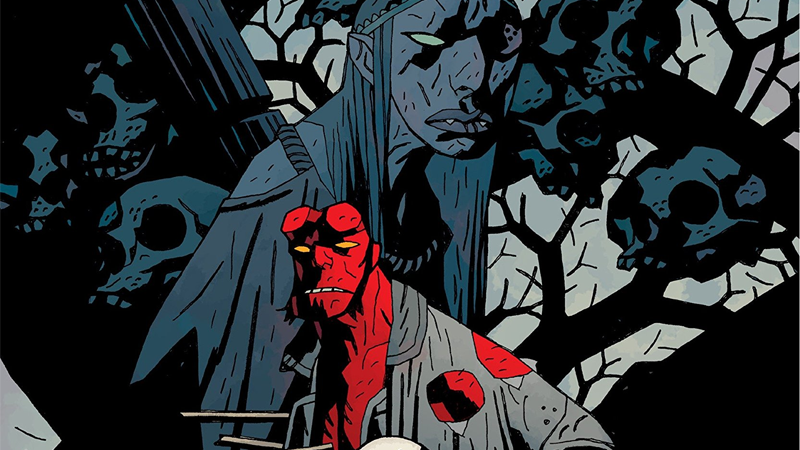 This storyline kicks off a three-volume saga that is considered one of the highlights of the entire Hellboy comics ouevre, and it’s where the new movie actually draws some of its plotlines from, revolving around the return of Nimue, the Blood Queen. This first storyline, however, is of a much more supernaturally spooky bent, as Hellboy finds himself trapped in Baba Yaga’s grip after refusing to become King of Hecate’s witches.

If you like it, follow up with The Wild Hunt and The Storm and the Fury, for something even similar to what the new movie is doing…although perhaps in a more enjoyable way? 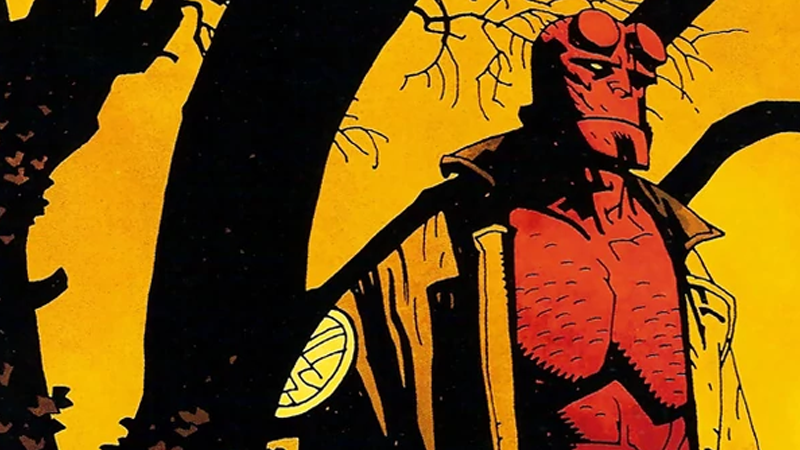 The Corpse and The Iron Shoes

Looking for something a little weirder and smaller-scale? This duology of short stories has some important connections to the wider Hellboy mythos by introducing the young Alice Monaghan, who’s played by Sasha Lane in the new movie. The Corpse, a darkly funny story about fairy abductions, serves as Alice’s origin, while The Iron Shoes, a short aside created to bulk out a collected release of The Corpse, features Hellboy crossing paths with a quaint and intriguing creature known only as Iron Shoes. 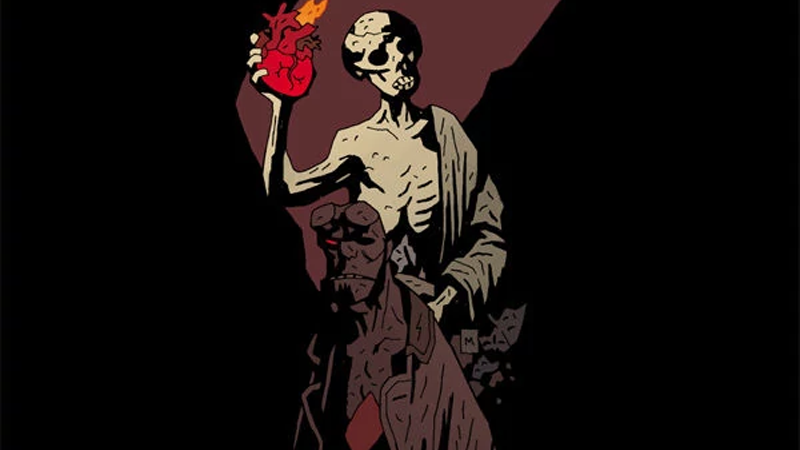 The end comes for us all, even Hellboy. (Image: Mike Mignola and Dave Stewart, Dark Horse Comics)

If Darkness Calls, Wild Hunt, and Storm and the Fury represent epic Hellboy storytelling at its most sweeping and grand, Hellboy in Hell represents it at its most personal and intimate. A saga years in the making, it charts Hellboy’s slow journey of acceptance of his own end, having died at the climax of The Fury. He spends most of that journey wandering around the afterlife fighting demons, sure, but in and among those moments, it’s a story about realising the permanence of endings, and the sadness and yet also the freedom in all of that. It’s a stunningly emotional arc for Hellboy, and one of his finest. 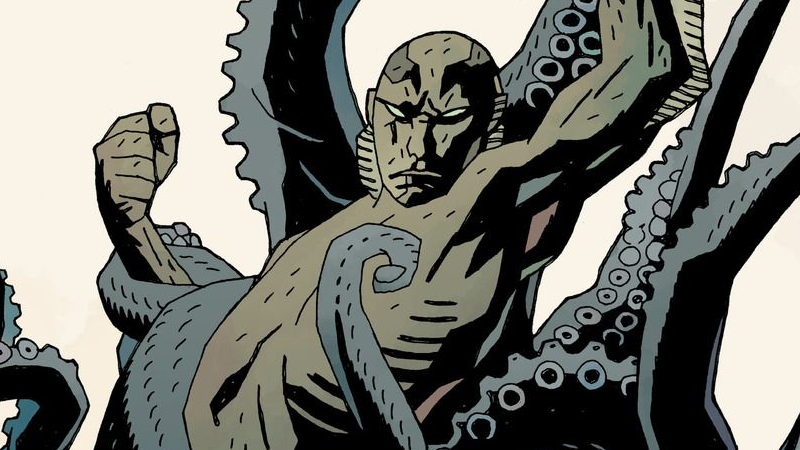 Abe, one of the most iconic non-Hellboy Hellboy characters around, doesn’t appear to factor into much, if any, of the new movie—but he’s a character still worth exploring beyond its confines anyway. The Drowning gives us a more naive, more contemplative Abe as he goes on his first solo mission. It’s a chance to see how Abe himself defines his relationship with Hellboy early on in his paranormal career, and his own journey of self-identity and assurance. It’s not the Abe you might remember from the Guillermo Del Toro movies, but it’s where he started before he became that man. That fish-man, technically. 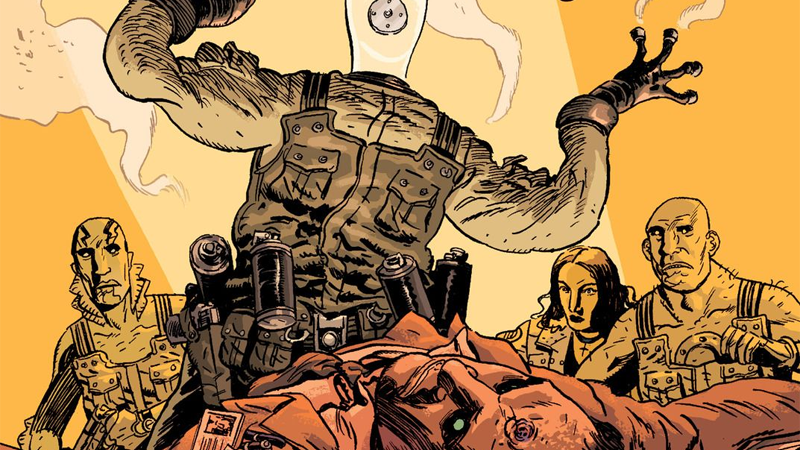 A good Hellboy comic doesn’t even have to actually have Hellboy in it. (Image: Guy Davis and Dave Stewart, Dark Horse Comics)

You can’t talk about Hellboy as a character without talking about the BPRD, the group of paranormal investigators and heroes who have spent the decades since Hellboy’s arrival working alongside him to fight supernatural threats. Plague of Frogs isn’t the first story with the group, but it’s the first set after Hellboy himself leaves the group after the Conqueror Worm storyline, and the first real story that sets the tone for the kinds of stories told under the B.P.R.D. series banner.

If you want something tied a little closer to the movie, B.P.R.D.: The Dead is the storyline that introduces Ben Daimio, the rough-and-ready skinchanger played by Daniel Dae Kim in the film.

Hellboy has been one of comics’ most enduring characters for the past 25 years, and he’s matched by a universe that’s grown and flourished around him, full of characters and stories that only barely touch on Big Red himself. There’s so much out there to discover—and even if his latest movie might not exactly represent Hellboy at his very best, there are a ton of remarkable comics that can whet your appetite for demonic asskicking at its finest.