A Big Adventure In A Literal Sandbox

Supraland is a massive game. Cast in the role of the hero of a race of red humanoids in conflict with their blue counterparts, players travel sprawling fantasy landscapes battling enemies, climbing immense towers, and solving incredibly clever puzzles. It’s easy to forget the whole thing takes place in a young boy’s sandbox.

To be fair, it’s a very odd sandbox that German developer Supra Games has created to host its Zelda-style adventure, out now on Steam. It’s filled with rocks and pipes. There are toy buildings the red rubber people call home. Pencils and other bits of child-appropriate debris stick out of the ground, along with things kids shouldn’t be playing with, like lit candles. And as far as all the stubbed-out cigarette butts on the ground, well, the boy who watches over this mini-civilisation either has older siblings or really needs to stop smoking. 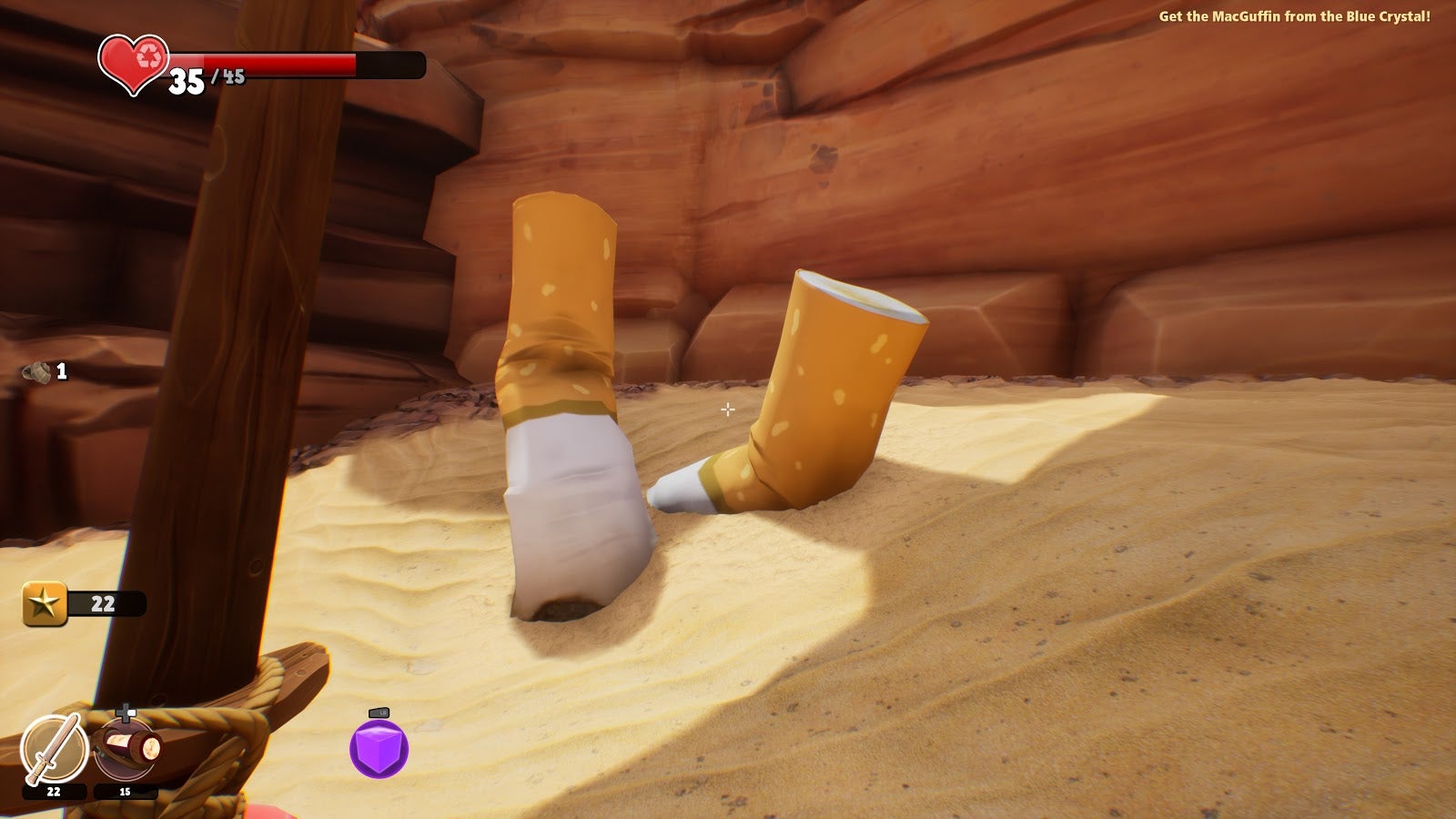 When an act of sabotage by the blue people is uncovered, the hero of the red folk of the sandbox is tasked with escorting the princess to the enemy’s base to figure out what’s going on. It’s not as easy as travelling from point A to point B. Supraland is a first-person adventure with Metroidvania elements.

Getting from one area to the next takes upgrades, like double and triple jumps, and those upgrades cost coins. The more coins the red hero collects, the more upgrades they can afford, and the further they can get. 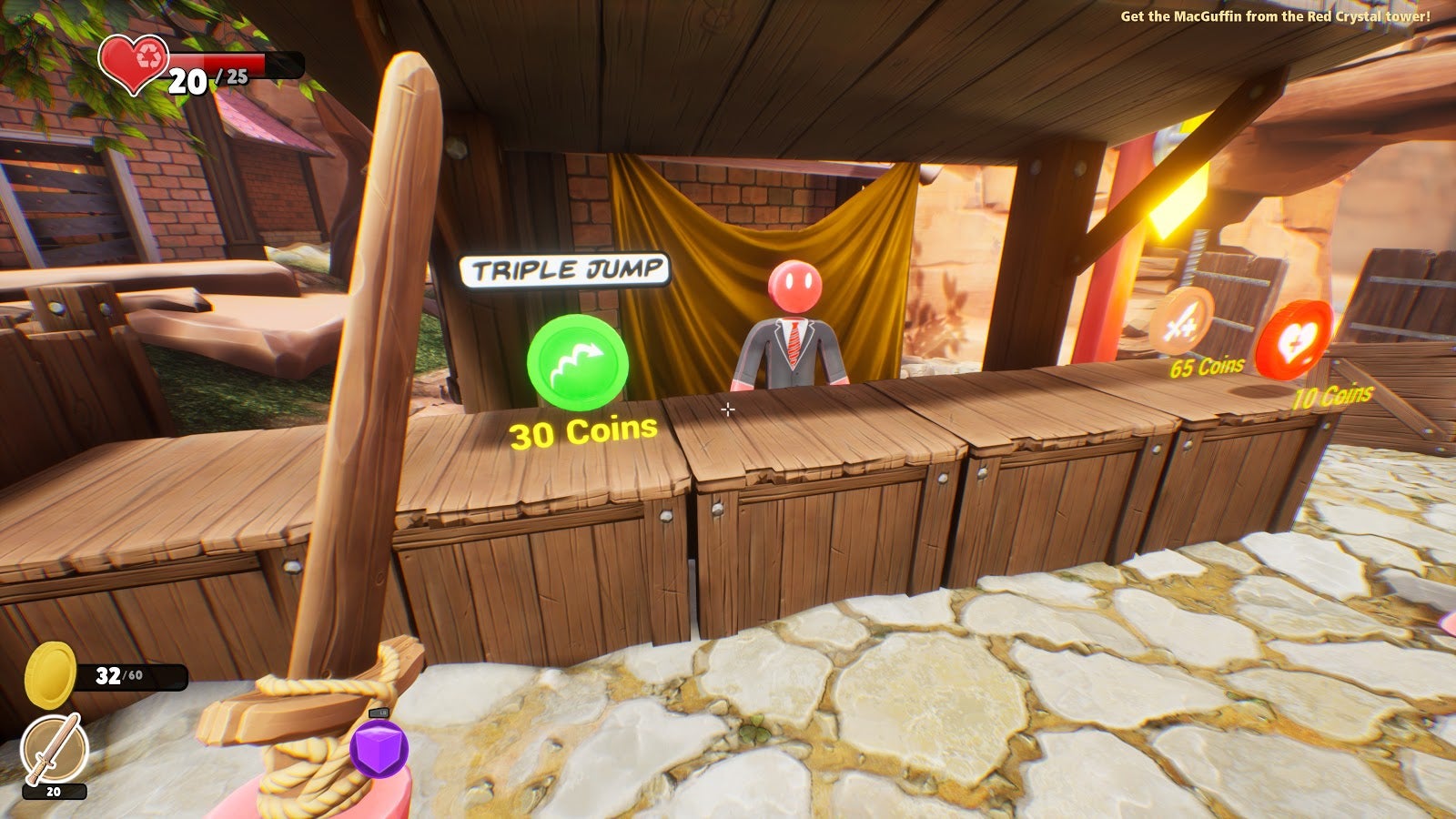 Supraland is also a land of puzzles. There are simple puzzles, like finding a switch to open a door. Then there are more complicated puzzles, like generating a purple block (one of the aforementioned upgrades) on a switch to open one door, running to the next door, using a gun to shoot the generated block from one switch onto another, closing the first door, and opening the next.

The game strikes a wonderful balance between puzzle solving and exploration. The solution to a problem isn’t always staring players in the face. Oftentimes, travelling past the puzzle to see it from a new angle is what it takes to see a solution. Sometimes it takes bizarre sandbox versions of Jesus. 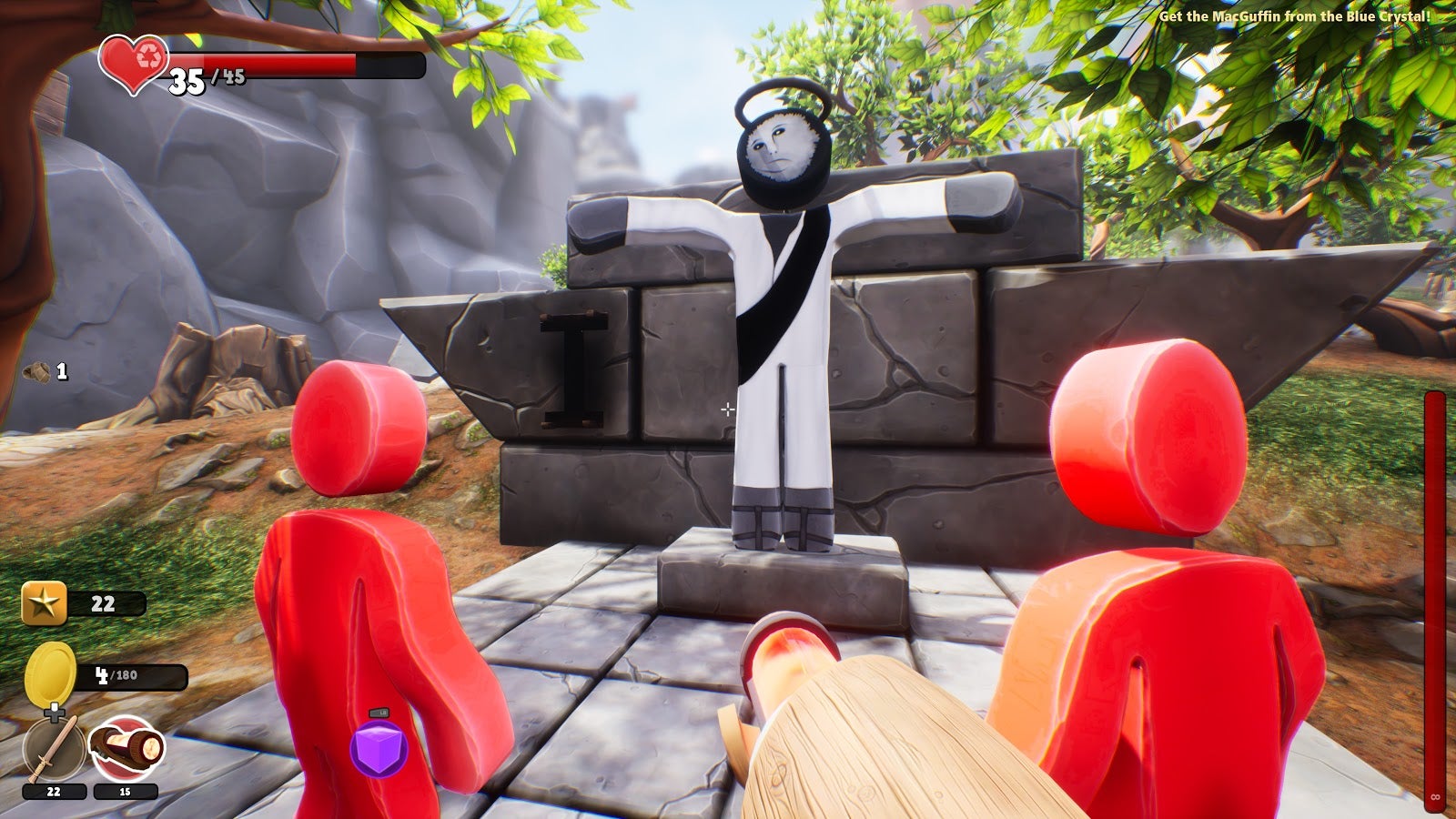 How does sandbox Jesus figure into the game? That’s one of the many things left up to the player to figure out in Supraland. As the developers put it in the official Steam description, “Supraland assumes that you are intelligent and lets you play independently.” The game starts, gives players a basic direction to go in, and lets them figure it out from there.

This leads to fun moments, like working out an elaborate plan to access a treasure chest located on the other side of a pit that involves jumping across half an area, then realising once you have the chest that there was a switch nearby that would have gotten the job done in seconds. Whoops, but still fun.

Another example is in this recent trailer for the game, which taught me I could damage enemies by spawning purple blocks over their heads. I have played the game for hours and never thought to try that.

Then again, I try to avoid combat in Supraland. The exploration and puzzle-solving elements are so strong that having to pause to swing a sword or shoot a gun at random skeleton creatures is an unpleasant interruption. 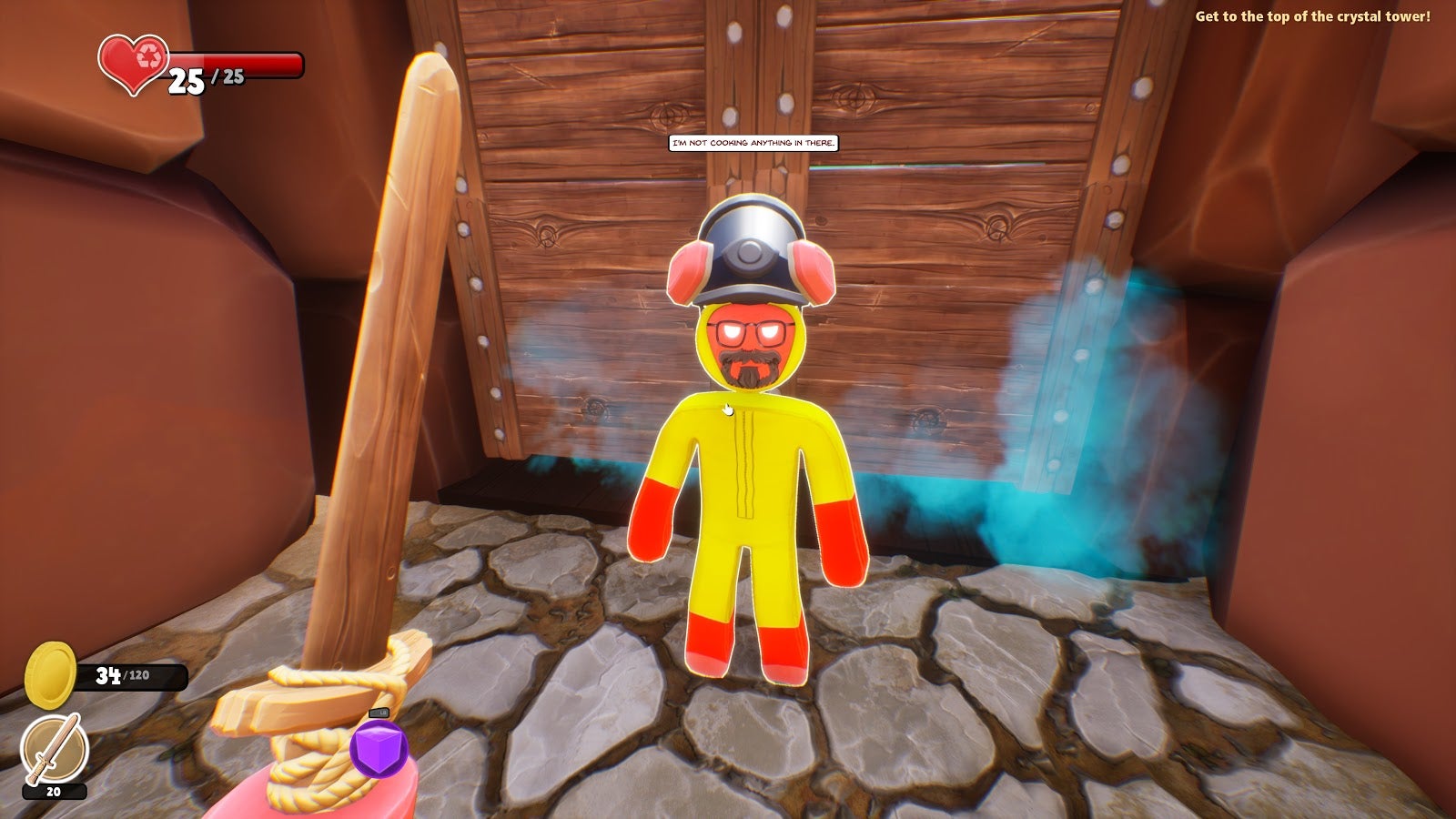 Fortunately, there’s a lot more puzzle-solving and platforming in Supraland than combat. I get so swept up in figuring out how to push far-off buttons or reach the top of a MacGuffin-holding tower, that I forget I’m just a little creature in a sandbox, skittering about. 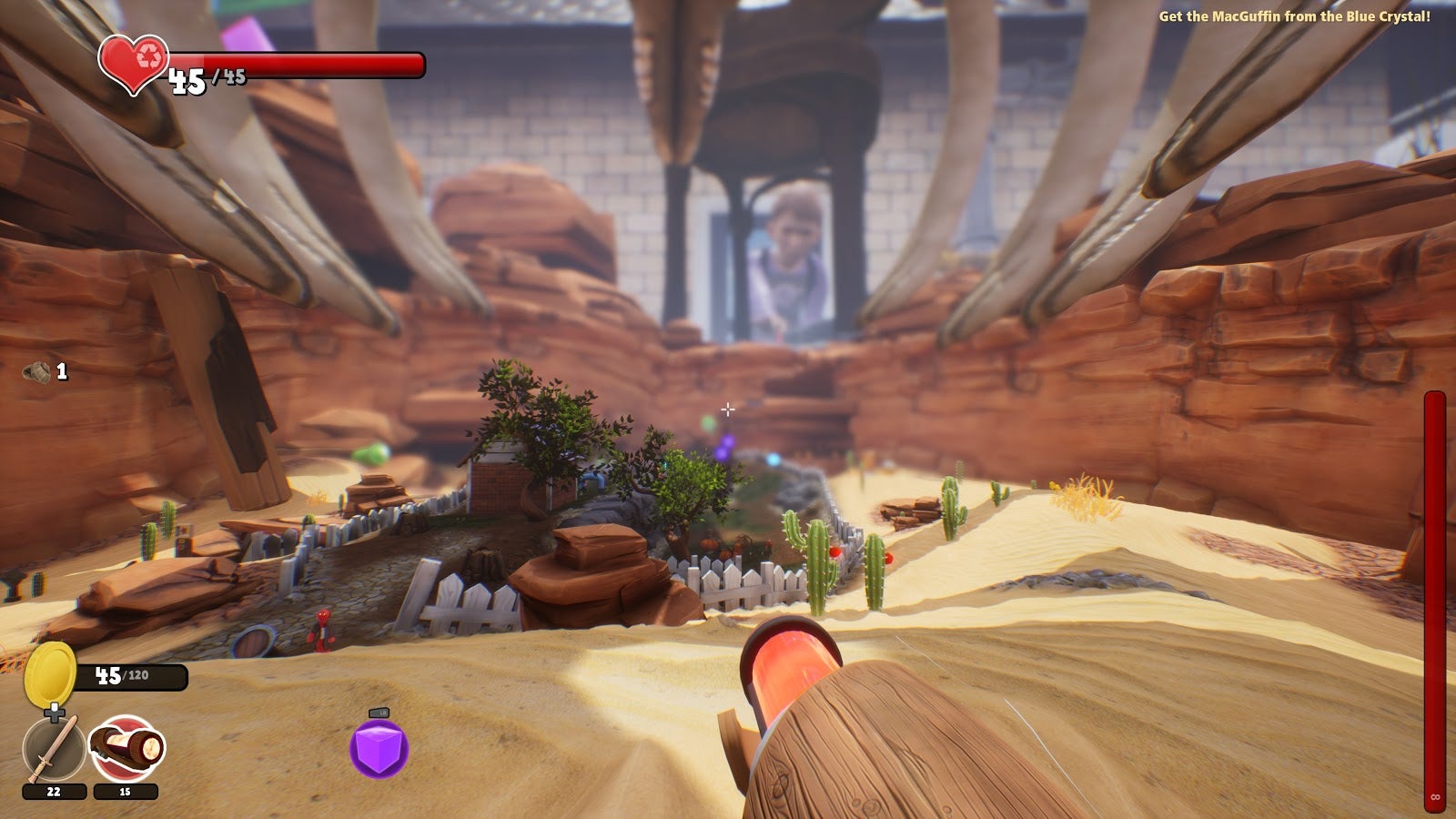 But there’s always someone there to remind me. Clean out your damn sandbox, kid.