I’m playing Anthem, and I’m flying through a tunnel. There are a lot of those in the game. This one happens to be filled with water. At the other end I can make out some light. I fly closer to it. Eventually I break through the surface into a sandy, sun-bleached arena surrounded by massive walls of sea water. For a few seconds Anthem is really, really cool again.

This takes place toward the end of The Sunken Cell, a new Stronghold added to Anthem in this week’s update and the first significant new piece of content since the game launched in February. It’s located in an underground facility which belongs to Doctor Harken, an evil scientist who likes to tamper with the powerful Shaper artefacts that have left Anthem’s world a broken mess.

Similar to the game’s three other Stronghold missions, The Sunken Cell ends with a boss fight, in this case against one of Harken’s experiments. The excitement of that fight pales in comparison to the background scenery, which is some of the game’s best.

Harken’s facility is connected by a series of tunnels and large water pipes which you can jump inside and travel through. Gaining access to them requires defeating waves of enemies and then solving a quick puzzle. You then spend a handful of seconds swimming through a pipe to the next section.

Except on the fourth one. That pipe leads to an open-air part of the surface where the Shaper technology has parted the ocean, creating a natural cage in which you’re forced to confront Harken’s experiment, an oversized mashup of ancient technology and monstrous flesh called the Unfathomed.

After being down in BioWare’s dark, dingy caves for so long, I found the azure skies and pulsing seafoam cyclone refreshing and even breathtaking.

“The creation of [this Stronghold] was all about this payoff,” BioWare’s level design director said during a livestream this week. “You’ve been going up, up, up in these tight spaces and then you come here and then you exit and you’re like, ‘Oh my god what is going on here?’”

Anthem’s scenery is one of its strongest elements. The look of the game’s sprawling nature reserves keeps me wanting to come back and wishing there was more pay-off for doing so.

Unfortunately, the Sunken Cell’s wonderful “holy crap” moment is surrounded by many of the same issues that plague the rest of the game.

Enemy fights still feel like haphazard melees with enemies sprouting up out of thin air in random places and little indication of where enemy fire is coming from.

Though The Sunken Cell is broken up into distinct sections, they blur together since they all consist of showing up in a big open room, blowing up the enemies that randomly spawn throughout it, and then flying to the next one.

The puzzles are as surface-level as those in the rest of the game — matching symbols in a Simon Says-fashion and coordinating timing with teammates so you activate levers simultaneously. 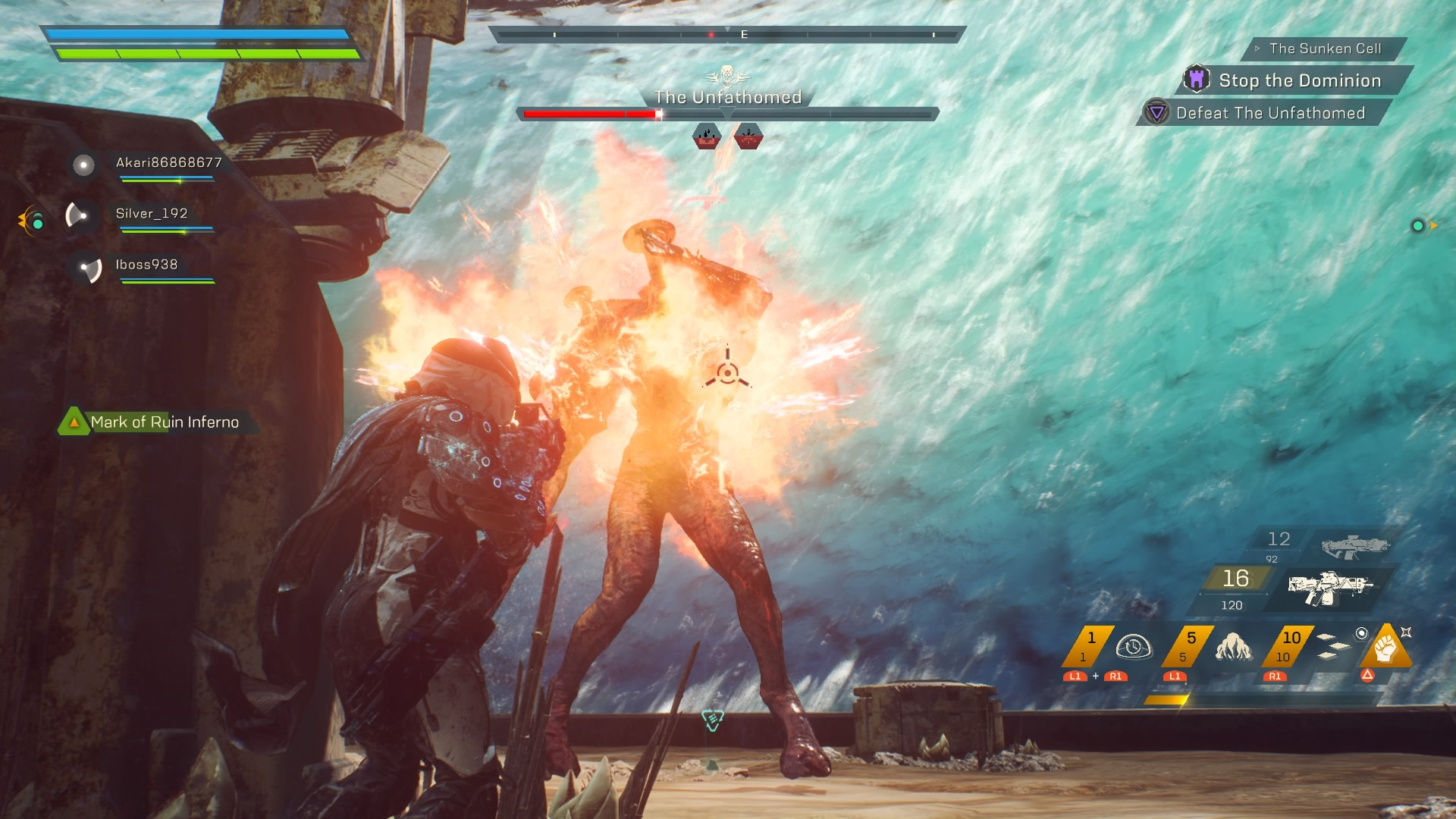 The Unfathomed is also a letdown. He bumbles around the arena firing purple blasts at you from afar. Sometimes they follow you and explode on impact to create little vortexes that suck you in and keep dealing damage. Other times they zap you in quick bursts.

They’re almost impossible to dodge while flying, so most of the battle plays out while darting behind piles of rocks, which feels like a supreme waste of the giant wall of moving water that surrounds you both.

And since BioWare still hasn’t sorted out Anthem’s loot problems, there’s no special Sunken-themed gear to collect at the end.

All of this is par for the course in Anthem at the moment, but perhaps the most disappointing part of the mission was when I tried to fly into the liquid vortex and was immediately bulldozed to the ground by forces unseen.

Diving underwater was one of the first things BioWare showed when Anthem’s gameplay was revealed at E3 and you spend a lot of time doing it in The Sunken Cell, so being able to dive in and out of a cyclone to dodge the Unfathomed’s attacks was my first inclination. Unfortunately it’s not one the game is ready to reward yet.