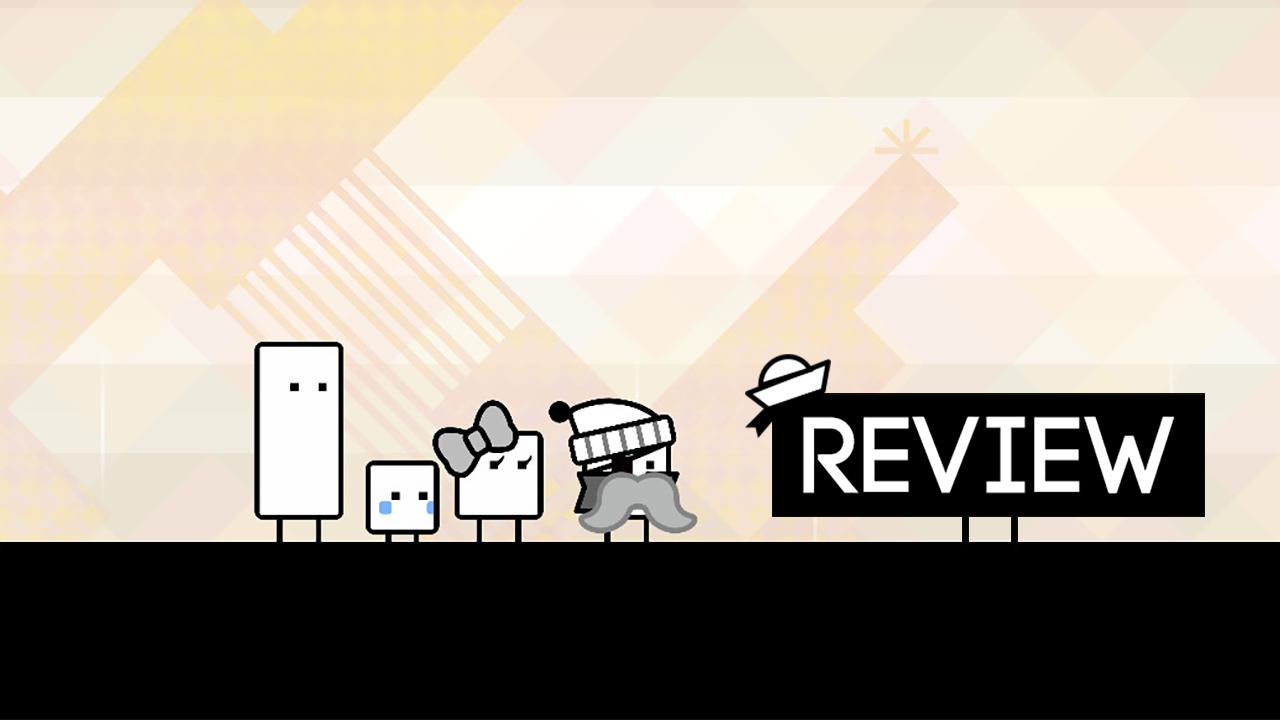 The fourth instalment of Hal Laboratory’s puzzle game series about box-shaped characters who can emit boxes from their bodies is tricky to recommend to series veterans, but it is a cinch to suggest to newcomers. For those who haven’t BoxBoy’d before, it should take about 16 to decide if BoxBoy + BoxGirl is something you’ll want to play.

You just need to see the basics of a BoxBoy game in action.

The games play out as sidescrollers but are primarily challenges of the mind, not of your reflexes. They’re in that subgenre of masterfully made puzzle adventures like Portal that challenge you to accomplish increasingly extraordinary feats of movement through space.

You enter a level, run a BoxBoy named Qbby (or, in this one, perhaps a BoxGirl named Qucy) to the first obstacle, then stop and think about how to extend boxes from your character’s body. Should you extend two boxes in a line out of the right side of BoxBoy’s body? Or grow one over his head and then another to the left to give him a sort of hat-hook?

BoxBoy adventures start simply, then layer on new ideas and introduce new obstacles, usually presented as a theme in a new batch of corridor-filled levels. At first, you’re just bridging gaps with straight rows of boxes or plopping down a basic elbow of blocks to form a staircase. Soon, the game throws trickier stuff at you and demands more creative solutions.

As levels introduce new ideas, BoxBoy players develop new skills. Eventually, you’re solving much more complex puzzles, by, say, riding a stack of boxes as they’re propelled by a spring to hit a switch and open a gate.

Or you might use an elbow of boxes to intercept a flying block platform with a drill on the end of it, creating a staircase that lets you grab a collectible crown in the process.

The Box Boy series began on 3DS in 2015 and immediately impressed with its clean look and clever gameplay. By the series’ third 3DS game, 2017’s ByeBye Boxboy, its designers at HAL Laboratory were adroitly offering basic early-game levels and terrifically creative later levels filled with special rocket-boosted or remote-controlled blocks.

The series’ Nintendo Switch debut, BoxBoy + BoxGirl, chills things out. It spends more time in its main single-player campaign—A Tale For One—doling out very basic levels. It takes longer to present the kind of creative level gimmicks and puzzle designs that made the 3DS games so impressive. Late-level themes in this new game involve such unexciting ideas as moving platforms or pushing super-sized blocks.

This comes off as a subtle downgrade in the ingenuity of the series and would be a warning of encroaching creative exhaustion if it wasn’t compensated by the game’s two other more exciting campaigns: one focusing on local co-op, the other on a new protagonist with a non-square shape.

BoxBoy + BoxGirl’s “A Tale For Two” co-op campaign can be played solo, but it shines in co-op, with one player controlling the Boxboy, Qbby, and the other the Boxgirl, Qucy. In A Tale For Two, the relatively basic trappings of the solo campaign serve as a comprehensible set of parameters for puzzles that task two players to combine boxes to solve.

In the main campaign, players are restricted to a set number of contiguous boxes they can emit into the world at one time. In co-op, each player has their own limit and has to figure out how to make their rationed number of boxes work best with their buddy’s. This twist to the formula makes even basic stair/bridge-building more interesting.

A Tale For Two gradually introduces the same sets of hazards introduced in the main campaign. The co-op design makes each of them more interesting to overcome.

As good as the co-op campaign is, the most exciting part of the game is its bonus campaign, A Tall Tale, which opens up after clearing A Tale For One. Here, new and old BoxBoy players are put on the same footing as the game’s designers take the basic formula and literally stretch it by putting players in control of a two-box-tall rectangle called Qudy.

This changes everything. The boxes he makes are long rectangles. In a twist, he can bend over, emitting rectangles that are aligned horizontally instead of vertically. This probably doesn’t read as a very exciting development. It’s less catchy than, I don’t know, putting a chainsaw on a gun, but it immediately makes Box Boy’s core gameplay feel fresh and exciting.

In its margins, BoxBoy + BoxGirl offers some discomfiting differences from the 3DS games to this new Switch one. Some of the wonderfully simple aspects of the earlier games’ designs have been made more convoluted, generally not for the better.

Take the graphics, which are still primarily black and white but have been given more special effects pizazz that seems to introduce needlessly slowed transitions between levels. Or take the change to the game’s score system.

In the earlier BoxBoy games, players were perpetually notified of the maximum number of boxes they should generate per level in order to obtain a level’s full rewards. The target number always appeared on screen and encouraged players to generate their boxes thoughtfully and without just spamming numerous configurations before stumbling across a level’s solution.

BoxBoy + BoxGirl levels also have a box-generating target, but players can’t see it without pausing the game and making a second button press to find out what the number is. Levels still offer more rewards for players who generate the smallest number of boxes, but for some reason the series’ designers have decided to now make achieving that goal more cumbersome. 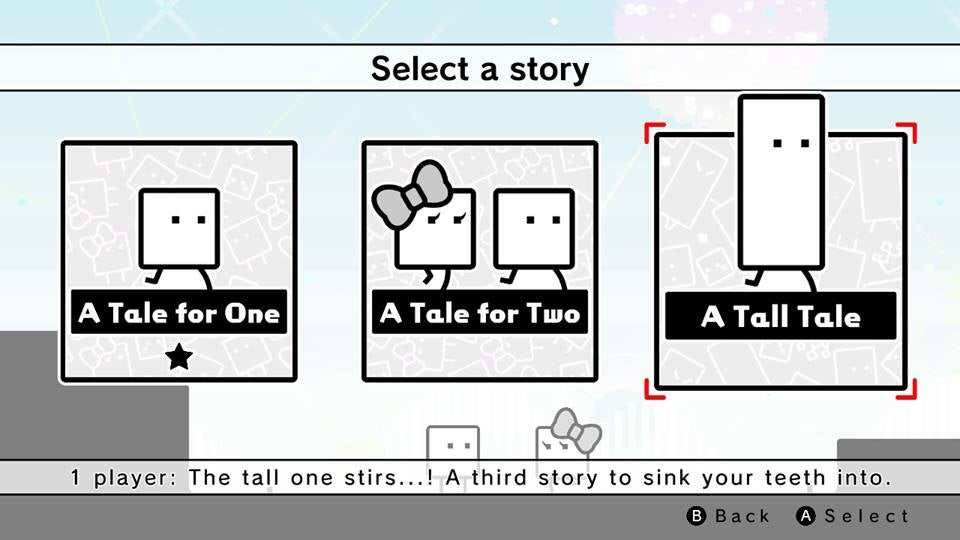 Three puzzle platformers in one

Some series formula changes, including the hiding of target scores, slows the pace of play. Main campaign has training wheels on for a while.

Cleared the main campaign in several hours, then played an hour of co-op and a few hours of the Tall Tale bonus campaign. Plenty more of the game's 200+ levels to go.

One largely positive complication of the series’ formula change: instead of simply unlocking alternate BoxBoy looks, you’ll draw them from a seemingly-randomised cosmetic loot dispenser, which serves the greater good of giving players a ton of head/eyes/hat/body customisation options. You can dress up the game’s playable characters in some very silly ways. 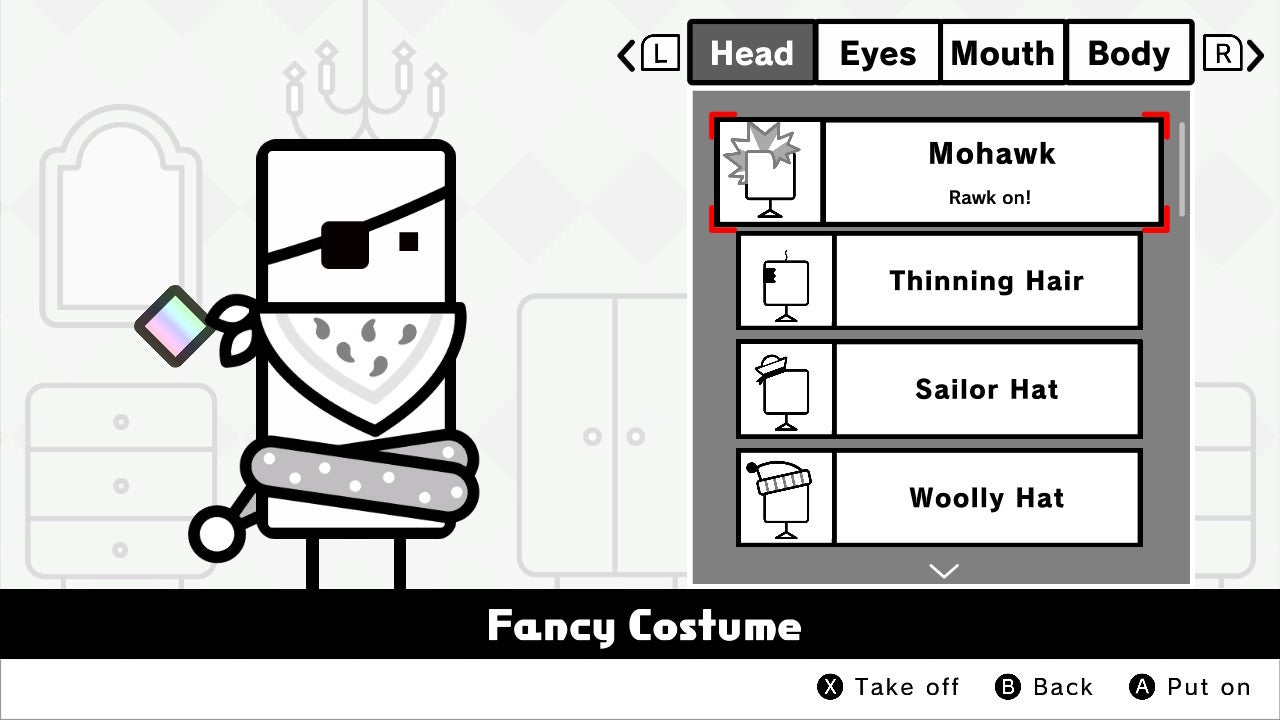 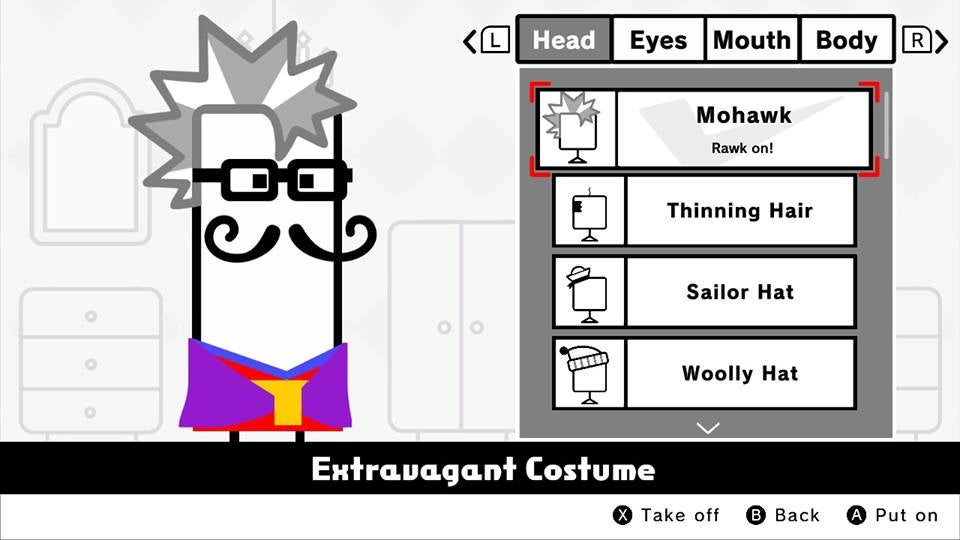 Narratively there is a tiny bit going on in the Box Boy games. There’s this whole box-shaped civilisation, with little box babies to protect and, as of the last 3DS game and now this Switch sequel, some interplanetary conflict.

It’s not deep. It’s not material for a novelisation or major motion picture. It does help establish context for unlockable comic strips, a series tradition that thankfully isn’t messed with at all. The new comics, which depict things the box people are all up to and always end in gags, are funny and good.

The main event for Box Boy games is the gameplay. The baseline quality remains high even though the best stuff is off the game’s main path. It’s a Very Video Game Thing to tell people they should play Box Boy for the co-op or should trudge through a decent but not stunning main campaign to get to the cool bonus one.

It’s like recommending a Japanese role-playing game that you love but cautioning that the first 10 hours are boring. Sometimes this is just how it is. Newcomers should have fun from the start of Box Boy + Box Girl. Old-timers will have to dig a little more. Everyone who plays will likely finish feeling at least a shade more clever. That’s always a nice feeling to get from a game.