For A Game About Pot, Weedcraft, Inc. Sure Is Square

Weedcraft, Inc., a new tycoon-style management sim released today on PC and Mac, wants you to know that it’s cool.

Hip-hop beats that wouldn’t sound out of place on a popular YouTube “lo-fi beats to study to” playlist fill the soundtrack. The art is grimy, but in a hip, DIY way, and the writing is full of disaffected, mildly satirical jokes about the square world that isn’t in on how Not A Big Deal weed is.

Unfortunately, cool kids can only stay cool as long as there are enough squares to compare them to, and once you start digging, Weedcraft is a lot more straightedge than it thinks it is.

When you start up Weedcraft, Inc., it has you choose between two scenarios—a basic one meant to tutorialize you, and an advanced one that throws you in the deep end—and tasks you with starting your very own home-grown cannabis business. Will you keep things shady and sell via dealers? Or will you build a legitimate cannabis empire for medicinal and recreational purposes alike?

As a management sim, Weedcraft, Inc. is heaven for tinkerers and obsessives. It’s also a bit straightforward—you’re mostly just managing resources and clocks, and the various systems all fit together in perfunctory ways. You can breed new strains of weed, each with their own set of characteristics like flavour and euphoria.

Tinkering with the nutrient balance in your growth medium affects the quality of your harvest, which then tips customer favourability according their preset preferences and the price you set. Your business can be legal, and increased activity will attract taxes and competitors. It can also be illegal, and attract law enforcement unless you invest in the appropriate countermeasures, like air purifiers, bribes, and lobbying.

The game’s strength comes from its specificity. The distinct quirks and requirements of growing and selling weed allows for plenty of room for granular management that leads to hours lost in crunchy gaming. The further it gets from weed, though, the messier Weedcraft gets.

Take, for example, the role playing game-style system you use to interact with its characters. You can talk to any character in Weedcraft, Inc., which offers opportunities to up their stats and attributes. All the characters in Weedcraft have a set of dispositions—maybe they’re an employee uncomfortable with doing illegal things, maybe they’re a cop predisposed to hating your guts.

Talking to them will allow you to flesh out more information about that character, which in turn will open dialogue options that can lead to improving said disposition.

So if you talk to a competitor in the hopes of asking them to do you a favour, it would behoove you to hit them up with small talk to learn that family is very important to them, for instance. You can then ask them what their feelings are about family, and then they in turn will feel more favourable to you.

It’s a very mechanical input-output arrangement that feels barebones compared to the clockwork of the other systems. It does, however, lead to very funny situations—like this familiar-looking man having very strong opinions about the state of the cannabis industry. 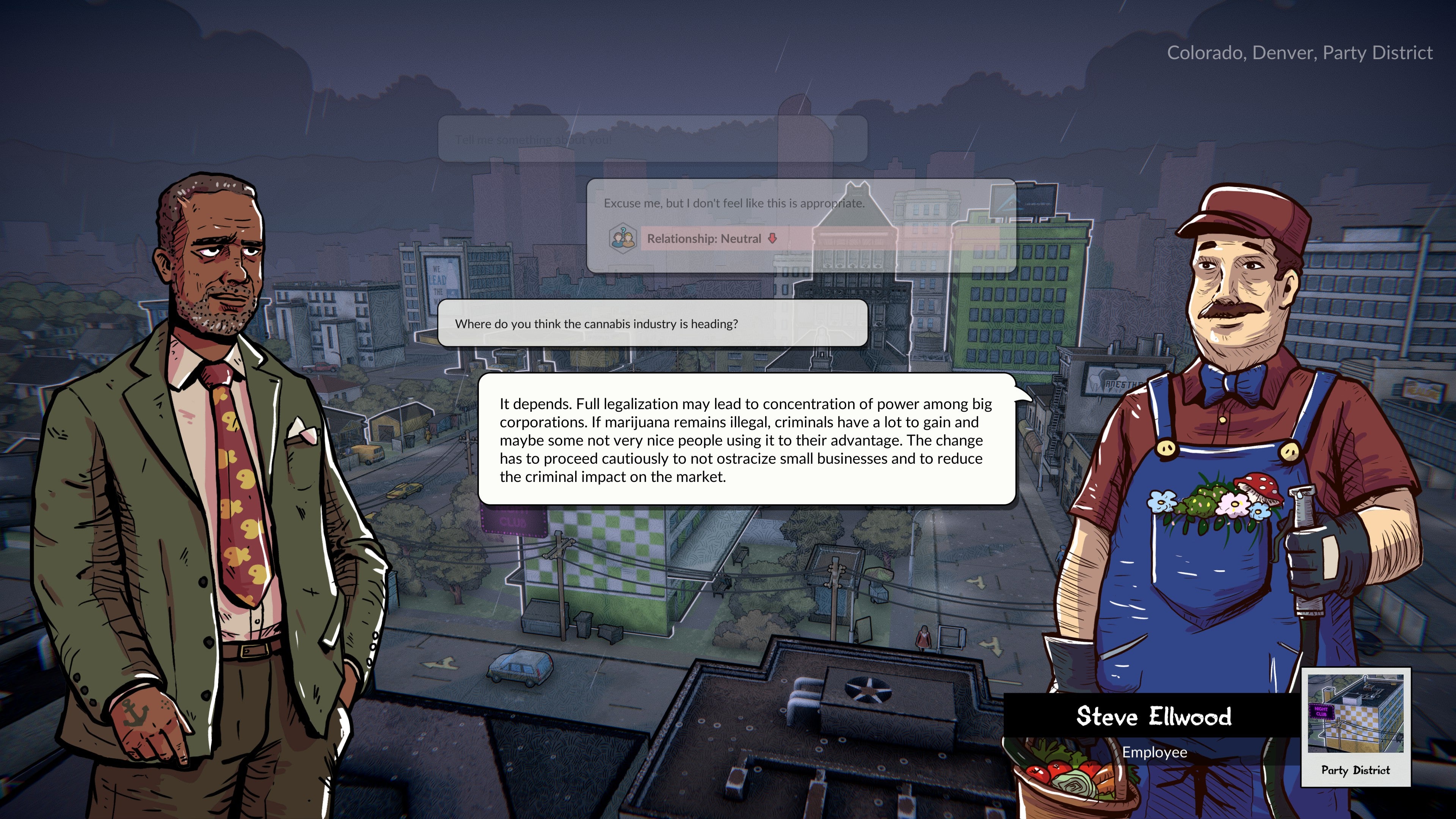 Were these actual characters instead of just collections of stats, this aspect of Weedcraft could push it over the edge from a game that’s pleasant enough for killing time to a game that lives in your brain and doesn’t let go. Instead, they’re emblematic of the game’s propensity for ignoring the human aspect of its subject in favour of simple maths.

Your customers are glibly categorised under titles like “jocks,” “junkies,” “grifters,” and “PTSD survivors.” The backstories the game offers in its twin starter scenarios—a young man in Flint, Michigan starting a business after his father’s death, and an ex-con in Denver, Colorado starting over—are barely engaged with in the opening hours, even as they directly reference things that should probably be brought up.

Setting a game in Flint, Michigan is a provocative move—five years later, the city’s water crisis still isn’t a closed book, and the specter of contaminated water could add a thoughtful, compelling wrinkle to the dynamics at play in Weedcraft’s simulation. Unfortunately, Weedcraft’s interests seem purely mechanical. 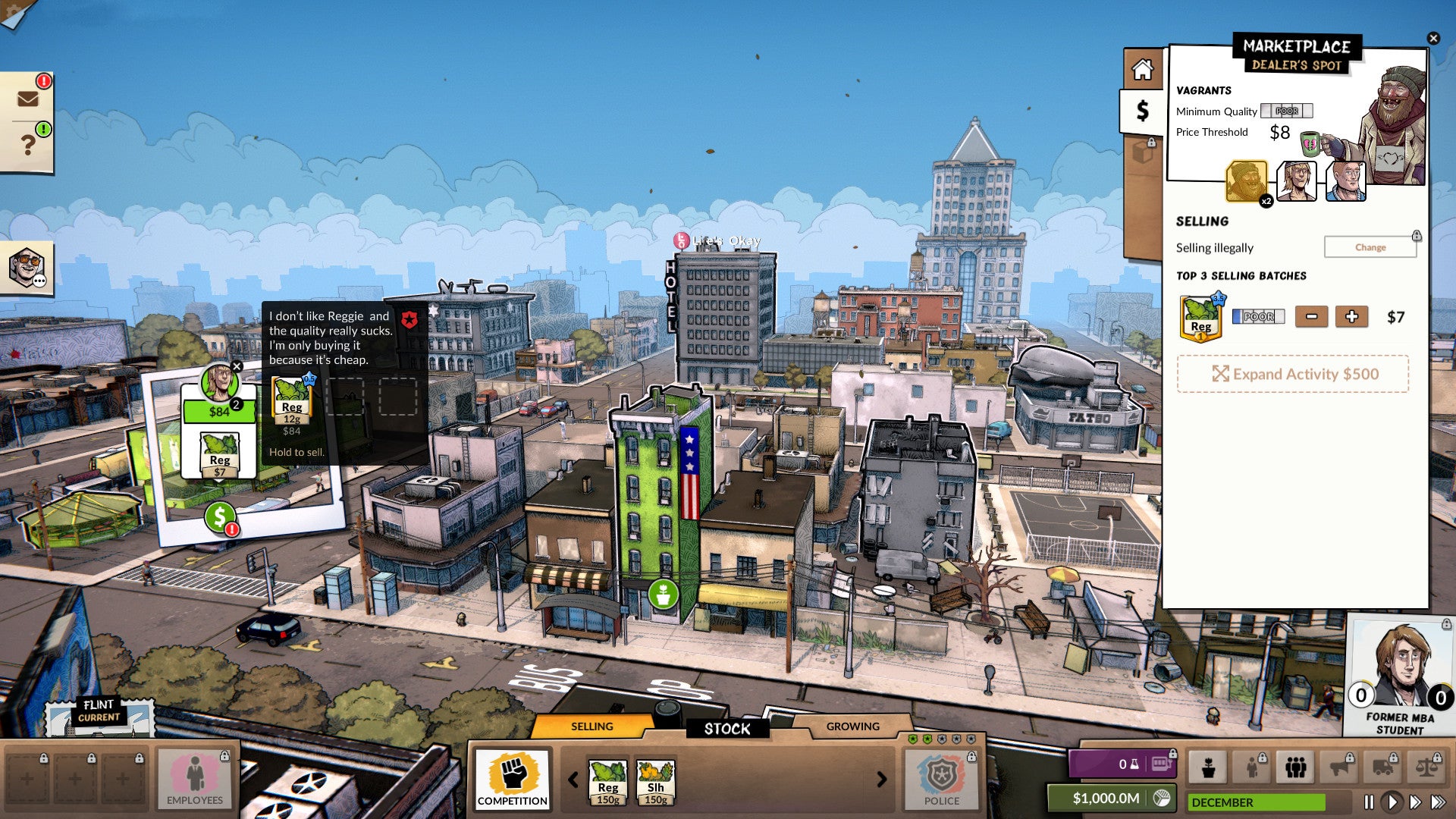 Weed is more than the mere navigation of laws and horticulture: It’s also about how we navigate race. As legalisation creeps across the United States, it continues to collide uncomfortably with the lingering racial bias of The War On Drugs, and the disproportionate penalties it has imposed on Americans of colour.

As a result, the burgeoning legal cannabis industry has overwhelmingly favoured white Americans—and years of cultural conditioning has left black and latinx Americans hesitant to join the industry.

Weedcraft, Inc. positions itself as a game that presents controversy with insight, letting you see through its systems the cultural tug-of-war at play in the country’s growing green rush. You can see some of that in the game, since getting a cannabis business off the ground in Weedcraft is extremely hard, full of endless masters that demand to be served.

The socioeconomics of weed in America are worth examining, but true insight can only really come from wrestling with the enormity of the picture, all of its uncomfortable contours and injustices. Otherwise, you’re just another wannabe mogul. Or a tycoon.