When I talk to people about the Phoenix Wright series, I often find myself adopting the idiosyncrasies of a crazed motivational speaker. “What are you waiting for?” I implore people, insistent that it’s for their own good. When will you take control of your life? I slink into the brazenly annoying behaviour of someone who finds out you haven’t seen Breaking Bad or Fullmetal Alchemist or The Office, or any other how-did-you-miss-this media du jour.

It was the same when I found out my friend hadn’t played any of the Phoenix Wright series, the first three games of which were re-released today on Switch, PlayStation 4, Xbox, and PC with a fresh coat of paint. “No better time than the present, now that the trilogy’s out again!” Play these games. 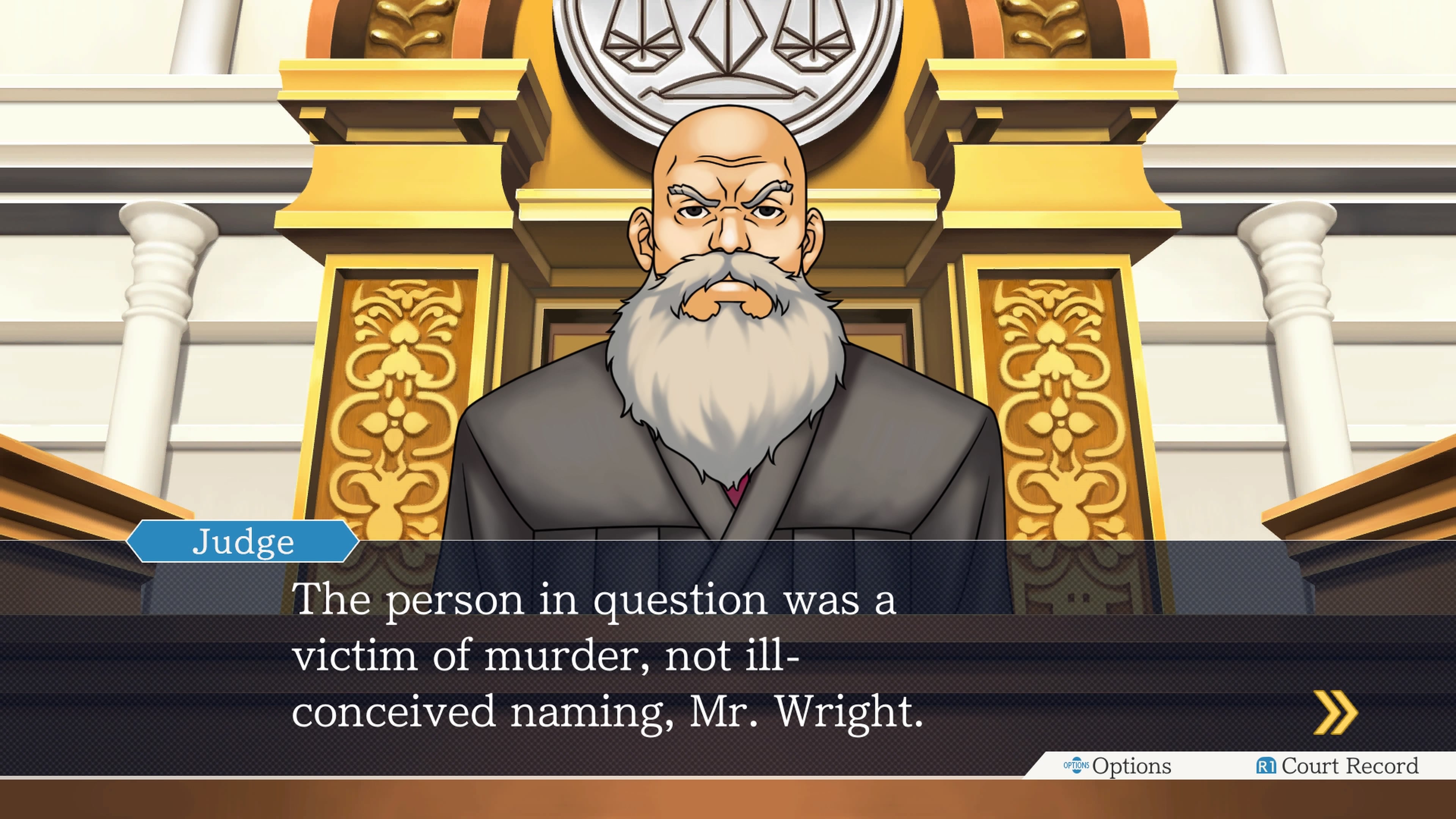 In this series? I’m not so sure…

In the series, you play as Phoenix Wright, a rookie defence attorney and maybe the closest thing to a straight man in a relentless gauntlet of comedic characters: hilarious, intentionally overblown law-and-order and murder-mystery tropes. There’s Frank Sahwit, a man who claims he saw it (a murder). There’s a bellboy who holds an elaborate tea set the entire time he testifies.

There’s a whip-wielding prosecutor who isn’t afraid to give everyone present a good smack if they waste her time. There’s the judge, a bumbling sweetheart whose sheer ability to acrobatically miss the point at key moments is equal parts charming and infuriating for everyone around him. In one case, you offer the judge a business card as evidence, at which point, genuinely moved by your politeness, he forgets where he is and offers you one of his. 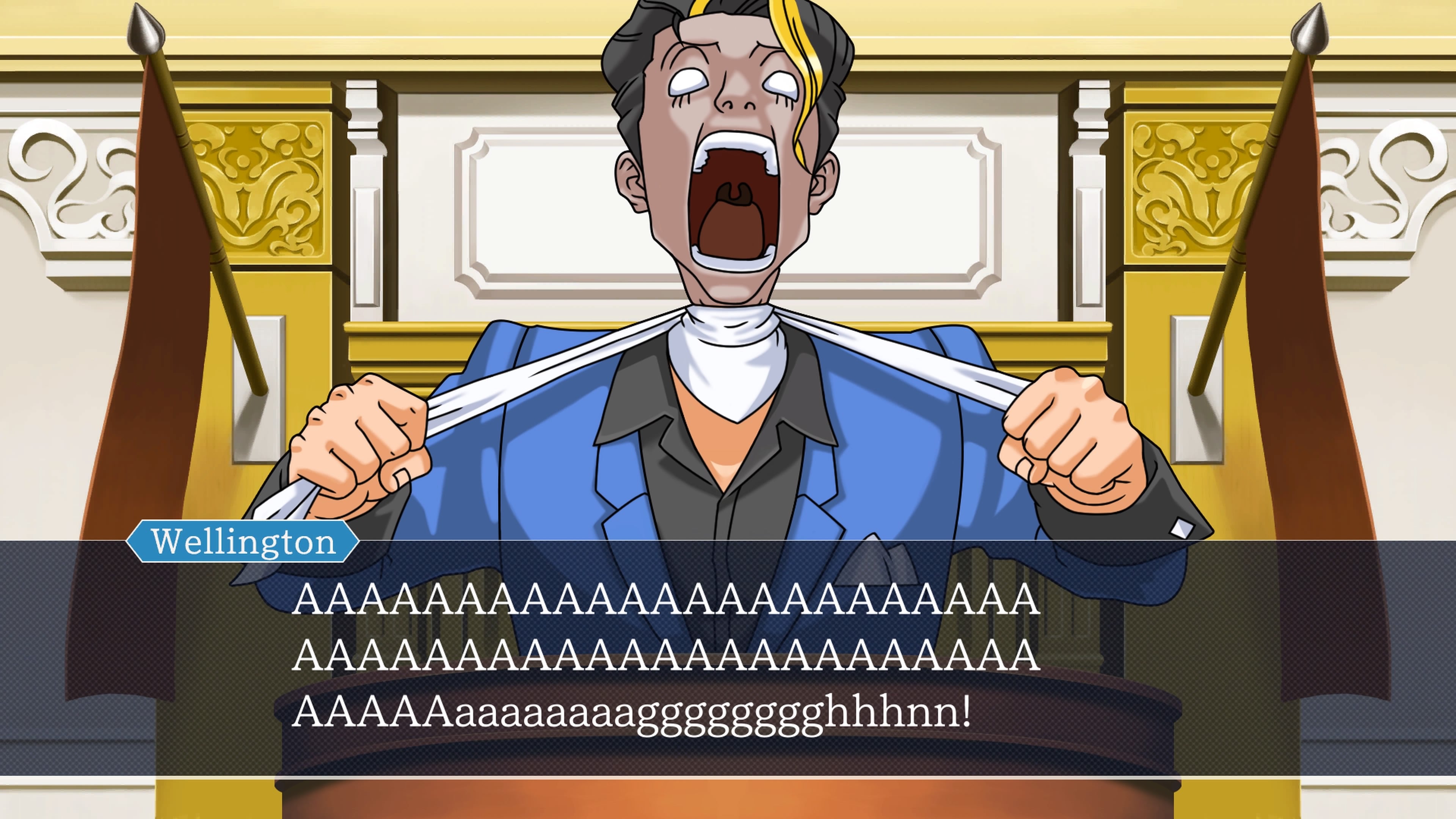 Among all this craziness, Phoenix Wright is very often the butt of the joke. Whether it’s his spiky hair, his savant-level skills at what is very clearly bullshitting in his courtroom, or his proclivity for screaming during a trial, Phoenix is constantly getting completely roasted and being a trooper about it.

Of course, that just makes me want to mess with him. When I played the series again, I forced my hapless Phoenix to make idiotic choices for the hell of it, finding new and exciting ways for the supporting characters to mock him. It was great. 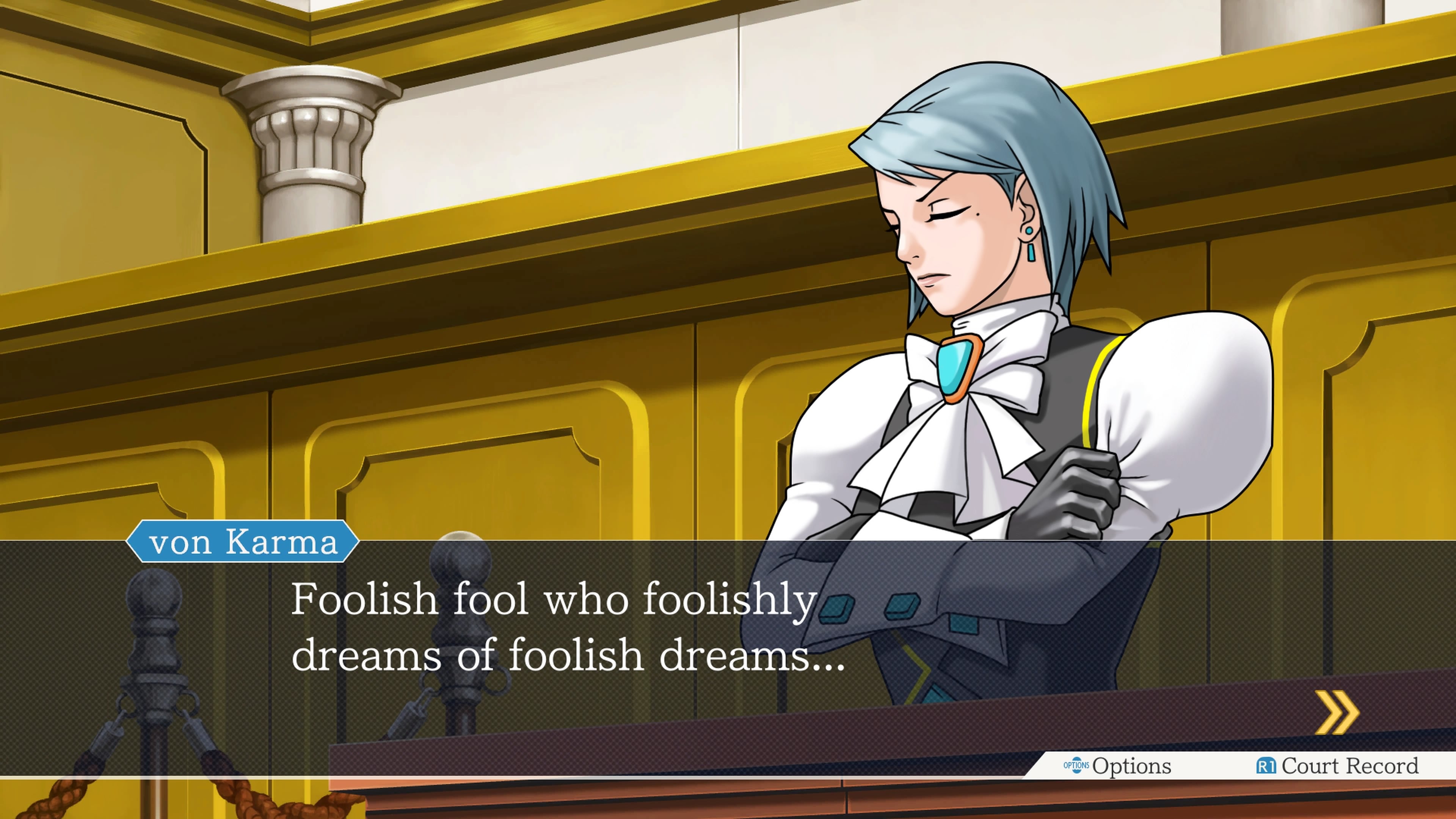 I’ve already played all of these games, so some of the thrill of figuring out these crimes wasn’t there for me anymore, but I was refreshed by how some of the humour still held up. The fact that some of the gameplay veers into “had to know what the developer was thinking” territory stood out as I occasionally stumbled through cases I only remembered broadly.

But a small quality-of-life improvement during investigations made blowing through the game that much better: A check mark now shows you where you’ve already searched as you’re combing crime scenes for evidence. There are also a few text skip options that weren’t in the original trilogy, in which you had to beat the game before you used them, as well as options like multiple save slots and a language toggle.

These features were added to the series in later Ace Attorney games and then implemented in the older ones for the re-releases. It made what had been a super tedious part of the older games way more manageable for me this time around. 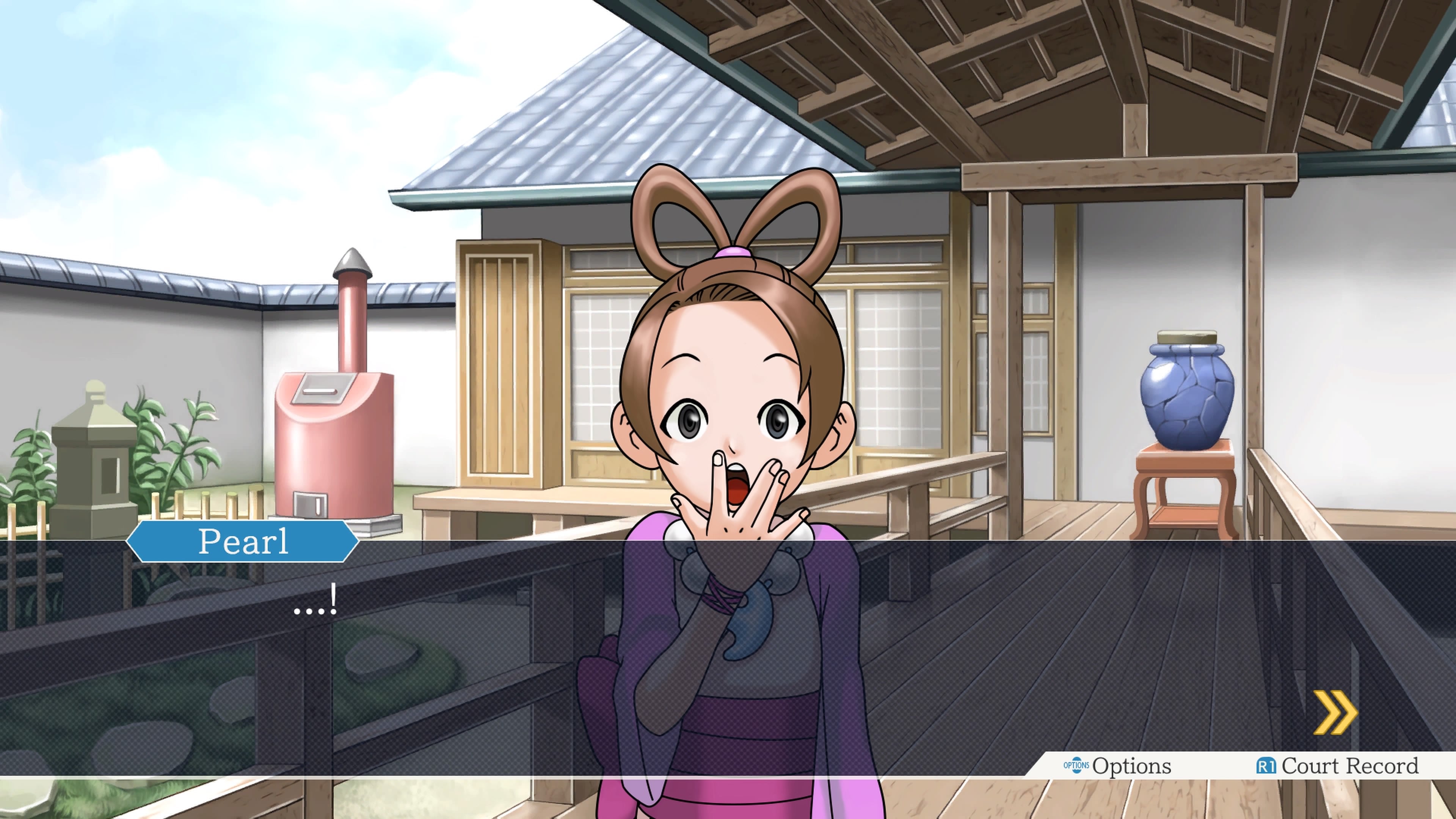 The series recklessly veers between outright foolishness and real tension and genuinely heartwarming moments. There’s still a baffling shower of confetti that falls every time you clear your client of wrongdoing, which I can’t imagine is a good use of taxpayer money. Phoenix’s best friend Larry Butz’s theme is still a whole entire banger. Young spirit medium Pearl is still painfully adorable. And if you’re confused but still don’t want to find out what I’m talking about, well… 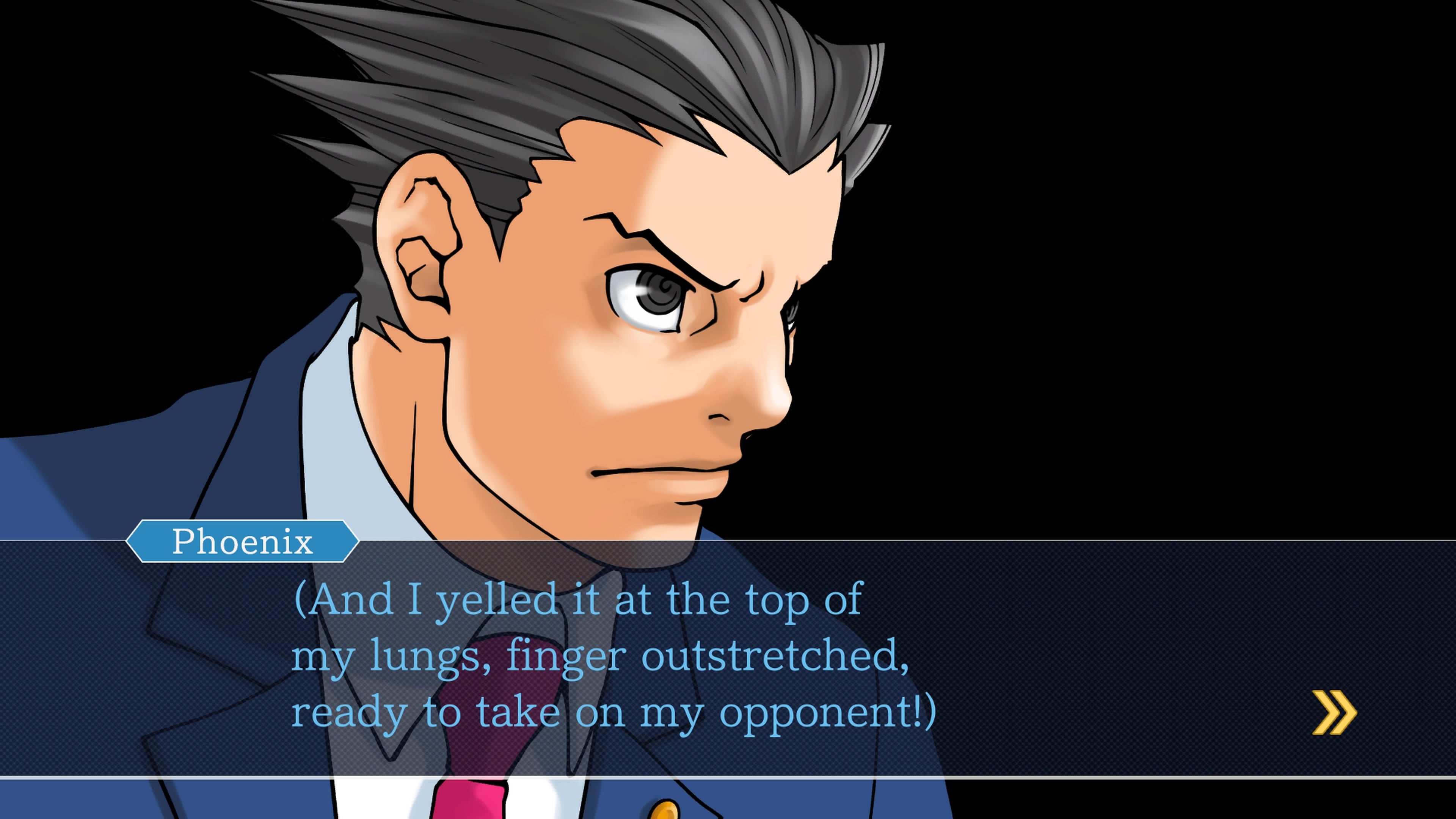 I’ll clench my teeth and say I respect your choices, but I’ll be lying.