I Really, Really Needed Rilakkuma And Kaoru This Month

When all the media you usually turn to in stressful times is currently screaming at the top of its lungs about BIG THINGS THAT ARE HAPPENING, AAAAAAHHH, what’s your escape hatch? The answer for me, weirdly enough, came in the form of an incredibly cute, stop-motion animated bear from Japan.

There’s a lot of nerdy stuff happening right now. We’re still coming down from the high of that blow my face off.

Game of Thrones is back and building to an epic climax. And then there’s a big, Avengers: Endgame-shaped elephant in the room. And as someone who has to cover all of that…it’s kind of anxiety-inducing.

Now, this might feel like a pretty privileged thing to be complaining about—because it absolutely, 100 per cent is. I’m a pasty-arse dude who gets to write about comic book superheroes, Star Wars, and other media that I care deeply about all day, and someone is so perplexingly pleased with the nonsense I churn out that they to pay me to do so. It’s a job—not always an easy job, just like working in any creative field — but I can at least admit it’s a good job.

And yet, there are times like this month, when there is so much happening so quickly — and all of it big and explosive and all about how the stakes have never been higher, the end of the world, or the galaxy, or an entire universe, is at stake — that sometimes you just want to find something to escape to. Anything to escape to, because if you don’t it all blurs into one, stake-laden nightmare of pop culture hysteria. One that very nearly broke me. 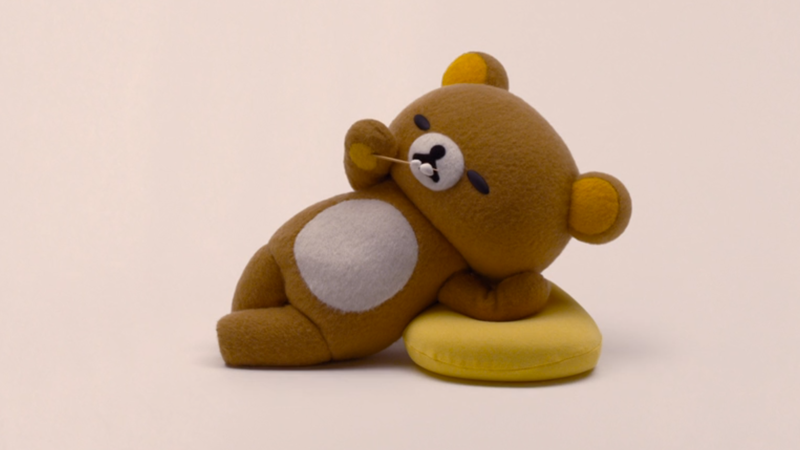 Rilakkuma enjoys some dango in one of the show’s many adorable opening skits. (Image: Netflix)

Last week Netflix dropped the first season of Dwarf Studio’s Rilakkuma and Kaoru, a new animated series about San-X’s tooth-achingly cute stationary mascot Rilakkuma. Since 2003, the bear — designed by Aki Kondo as the physical embodiment of her own desire to escape the stresses of work and have her own pet — has become one of the most beloved mascot characters in Japan, emblazoned on all sorts of merchandise, like all good beloved mascot characters are.

But Rilakkuma and Kaoru marks the character’s animated debut, and the trailers that Netflix put out were adorable enough that I decided to stream the whole thing this past weekend. Not that it took it long — you can get through its 13 episodes in just over two hours, as they all clock in around 10 to 12 minutes each. But even then, I didn’t expect the show to have the impact on me it did.

Rilakkuma and Kaoru follows the titular duo — as well as two other cutesy characters: a small, white bear named Korilakkuma, and a chick named Kiiroitori — over the course of a year in their lives. Kaoru is a Japanese office worker in her mid-20s (not that one). Rilakkuma, as we’ve previously established, is a sentient plush bear. It’s a quiet, intimate show; the biggest events are twee adventures like the plush trio trying part-time jobs, or attending festivals like the Hanami flower viewing. 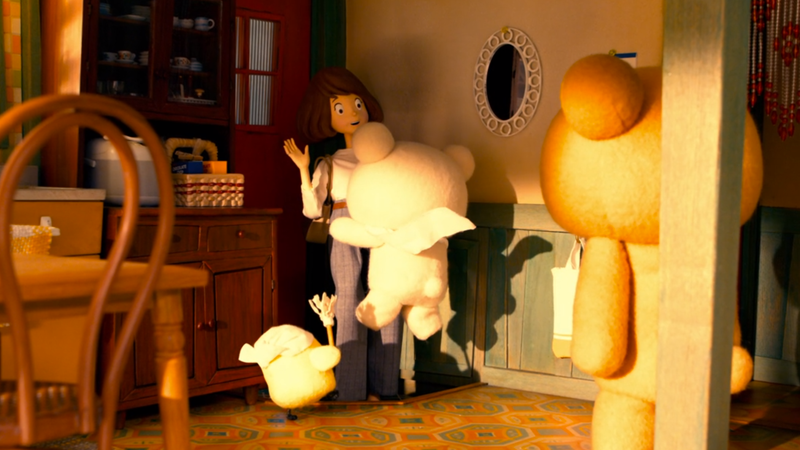 No one ever stops to ask why Kaoru’s roommates-slash-pets are plush animals that only communicate in adorable little chirps—nor do we learn of some grand origin story of how they came to be, although a later flashback episode covers how Kaoru first met them. Rilakkuma, Korilakkuma, and Kiiroitori just are, and the world of Rilakkuma and Kaoru is fine with that. It’s a classically cosy fantasy — a hazy mix of the absurd and the mundane.

The closest thing to an existential threat on Rilakkuma and Kaoru isn’t a mad alien with a love of costume jewellery that can decimate life with the snap of a finger, but the fact that Kaoru’s apartment building is being demolished, and the gang needs to move out and find a new place that’s within her budget.

But while the small-scaled intimacy of Rilakkuma and Kaoru is what drew me to it in the first place—that chance to flee to something with such a tight scope—it was ultimately Kaoru’s journey across the series that I took to heart more than the almost cloying sweetness of her plush pals. Because, for all its earnest cuteness, Rilakkuma and Kaoru never shies away from depicting Kaoru’s stresses and struggles — sometimes with humour, sometimes not — as she tries to navigate a job that is just plain shitty, and how its all-encompassing stranglehold on her life has left her isolated. 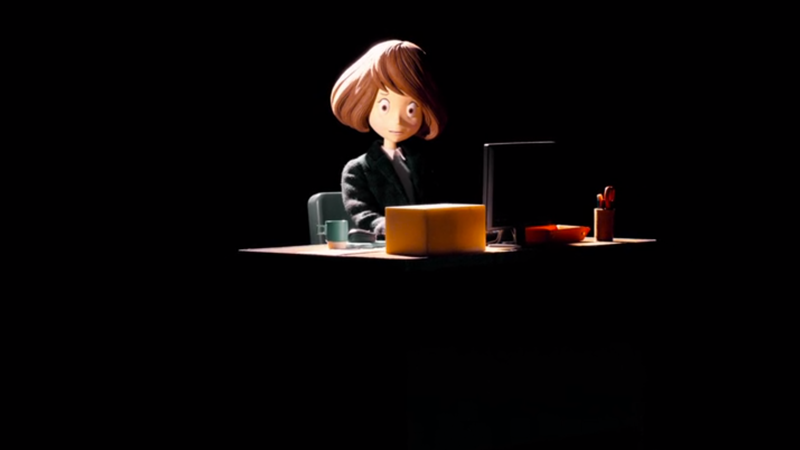 The show often pulls Kaoru into this spartan void to focus in on her stresses. (Image: Netflix)

Kaoru lives her for her work, but her work does not live for her. No one particularly values the time or effort she puts in at the office, and people gossip about her, yet she shows up every day and works her guts out anyway. As her circle of friends grows further apart, she begins to realise how little the people she cares about actually think about her now that they’ve moved on to have families and lives of their own — every engagement announcement a gloomy reminder that sends Kaoru spiraling into depression.

And that’s even before she has to deal with looking after Rilakkuma and its friends, or looking for a new place to live. This is still a cute stop-motion animated series, of course, but it’s almost surprising to the degree of reality which Rilakkuma and Kaoru treats Kaoru’s mental well-being alongside its carefree whimsy.

How Kaoru deals with those depressive spirals is what drives much of her journey across the show, in ways that feel earnest and real. Sometimes they’re bizarre comedies of error—like an episode where Kaoru keeps ordering fitness gear online so she can try and talk to the attractive deliveryman. Sometimes, it’s just about taking the step to buy an umbrella so she doesn’t get soaked during tsuyu, Japan’s rainy season.

But throughout it all, Kaoru constantly has the support of Rilakkuma, Korilakkuma, and Kiiroitori, all trying in their own small ways to cheer her up and give her chances to appreciate the whimsy, wonder, and beauty of the world around her. 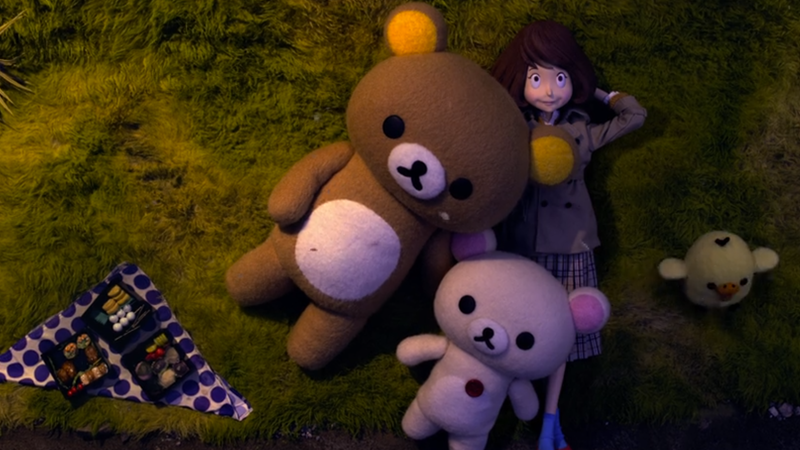 Sometimes the best friend in a world is a giant plush bear. (Image: Netflix)

Rilakkuma and Kaoru is a love letter to the need to escape, to stop and take time for yourself when everything around you feels like high-stakes chaos. But at the same time, it’s also a reminder that those acts of escape don’t have to be as grand and as sweeping as the chaos that warranted the need for them in the first place. Sometimes it’s about promising to do something for yourself, and actually doing it. Sometimes it’s just about stopping and watching the flowers, or taking care of the friends around you, knowing that they’ll take care of you too.

Among the booms and bangs of the blockbuster epics pummelling us for attention right now, I didn’t know how much I needed that reminder.