I’m Cramming Old BoxBoy Games Before The Sequel Comes Out

About a year ago, I came to grips with my failure to keep up with some of my favourite game series. I’m about two Fire Emblems behind and still about a half-game short of being caught up on Mario & Luigi. I’ve learned that I should just skip and reset with the new one, but I’m not doing that for BoxBoy.

BoxBoy games are great, but I got overwhelmed by them. I’d been idling on the third BoxBoy game since 2017. When a new one called Boxboy + Boxgirl was announced earlier this year, I decided I’d skip playing the rest of the third game. As the fourth game approached release, however, I had second thoughts.

What was I missing? Great puzzles? The new game would surely have even more. But how might the new game begin? Would I be confused about the state of BoxBoy’s world? What if something really important happened in that third BoxBoy game? What if there were key plot developments? What if he’d gotten a BoxDog I didn’t know about?

Now I’m tearing through it before the new Boxboy game comes out at the end of the month. I would catch up on all that BoxBoy lore, I told myself, so that I could say as much when I played and possibly reviewed the next one.

The joke is that BoxBoy isn’t really a lore series. It’s a lovely, minimalist set of puzzle sidescrollers that are rapidly churned out by the developers at HAL Laboratory who you’d think would be too busy making all their Kirby games.

The game’s hero is a walking box named Qbby who can emit three or more contiguous boxes from his body to form bridges, stairs, and other useful shapes to get through one challenge-filled hallway after another. There’s no one to punch or shoot in these games. The enemies are bottomless pits, tight squeezes, some spikes, and a laser or two.

Levels slowly teach players the surprisingly abundant possibilities that come from BoxBoy’s simple move set. The boxes can become a shield or a hook that can allow Qbby to catch a ledge. Across three games and hundreds of levels, HAL keeps finding ways to introduce new ideas and then test the player’s ability to understand them.

The first game came out in 2015, the first sequel in 2016. By the time the third game came out in 2017, I was BoxBoy’d out. They called the third game Bye-Bye BoxBoy and for some reason I took that literally and thought it’d be the last one, so I didn’t need to rush it. I was wrong, and now there’s a new BoxBoy game, BoxBoy + BoxGirl, for Nintendo Switch, on the verge of release.

Yesterday, I charged my 3DS and got back into Bye-Bye BoxBoy. I was apprehensive. Was this really the wisest thing to do, just so I could later confirm I was caught up on BoxBoy lore? I was worried that if I binged an older BoxBoy game right before the new one, I’d burn out my BoxBoy ebullience. 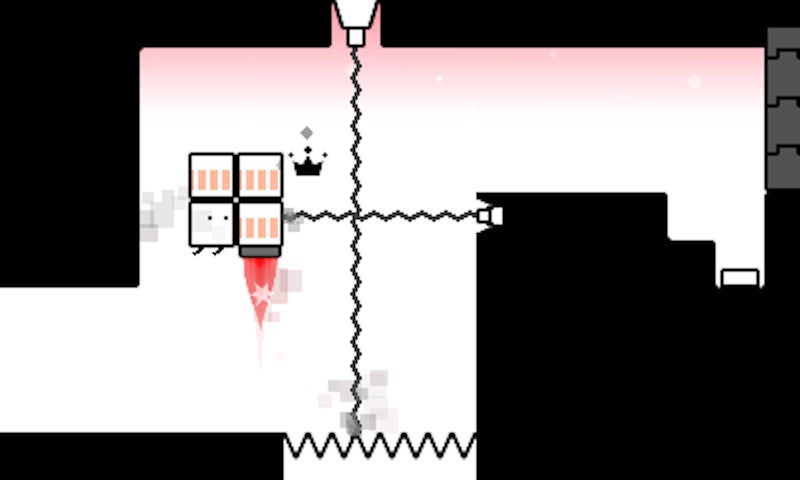 The first special ability empowers Qbby to emit boxes that soar upward like rockets. Those rocket boxes make for some great new puzzles. Just this morning, I got to the end of the game’s second planet and learned about the power to make bomb boxes. I don’t even know what comes next.

By the way, notice that? There are planets and boxbabies! Maybe there’s some lore in here I need to learn after all.

So I’m playing Bye-Bye BoxBoy today. I’m zipping through it, having a great time, and will maybe even learn where Qbabies come from. I don’t think game number three is going to burn me out after all. It’ll probably help me better appreciate what is and isn’t new about BoxBoy + BoxGirl once I get a chance to try it.

I wish I could catch up on more games. I’m sure I’m going to miss good stuff if I skip installments of a series I really like. There’s just not enough time. There’s no way I can make time to do this for Fire Emblem, though I might still have a window to catch up on Mario & Luigi. It’s dangerous to think this way, though, because then I think about how far behind I fell on Phoenix Wright. I just can’t get to it all. Right?