die harddistrict 9game of thronesgaming shelfio9labyrinthrpgstar warstabletop gamestomb raider
To sign up for our daily newsletter covering the latest news, features and reviews, head HERE. For a running feed of all our stories, follow us on Twitter HERE. Or you can bookmark the Kotaku Australia homepage to visit whenever you need a news fix.

Welcome back to Gaming Shelf, our regular column all about the latest news in tabletop and roleplaying games. If there’s one gaming theme from the past week of announcements it’s been all franchises, all the time.

We’ve got new games and old reprints based on several classic sci-fi and fantasy films and shows. Plus, if you’re been dying to find out how you’d fare in Nakatomi Plaza, have I got the game for you. Check them out! 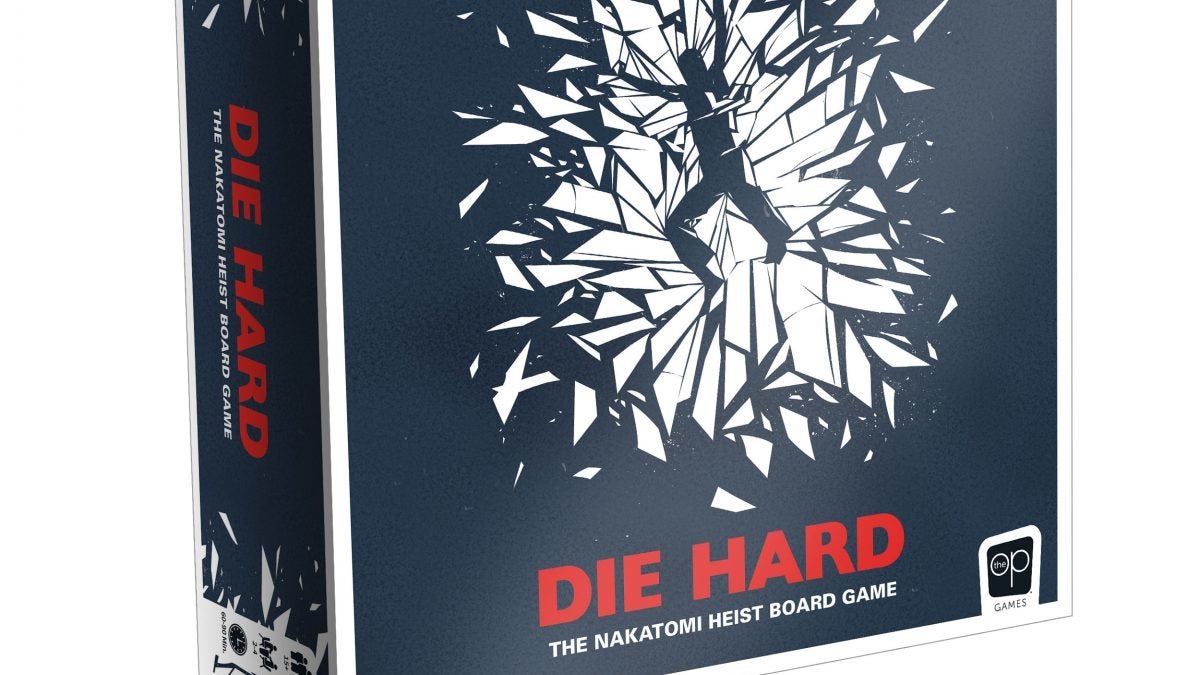 Get ready to do battle over who plays John McClane. (Image: USAopoly)

This game will have the biggest competition before you even start playing. USAopoly has announced the first licensed board game based on Die Hard. One player takes on the role of the hero John McClane (Bruce Willis), while the other players are the thieves trying to stop McClane from rescuing the hostages and stopping the robbery.

Seriously, you better have some straws everyone can draw before starting this one, because literally everybody’s going to want to be McClane. Die Hard: The Nakatomi Heist Board Game comes out this spring, though you might want to save it for a Christmas gift.

Created by Ben Milton and Jack Caesar, the roleplaying game is designed to be flexible—it has its own rules system for newcomers to roleplaying, with the option for expert players to use their preferred methods. Labyrinth: The Adventure Game comes out later this year. 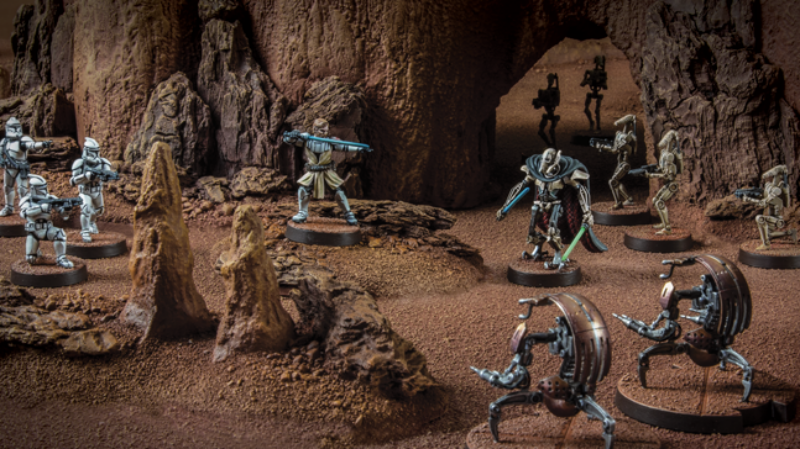 It’s the Attack of the Clones! Fantasy Flight Games recently unveiled a new Clone Wars Core Set for Star Wars: Legion, which brings new battles, characters, and challenges to the game. Separatist droids battle against Jedi Knights and the Galactic Republic for the fate of the galaxy—before Anakin Skywalker does his whole “even the younglings” thing.

The company has announced the first expansions in this new core set: Clone Troopers and Battle Droids. Both sets of figures should come out this fall.

Tomb Raiders Legends: The Board Game

The legendary Lara Croft is heading to board games. Square Enix is getting into the board game business with Tomb Raiders Legends: The Board Game, a competitive board game that pits a series of Lara Crofts (I guess she got cloned?) against each other in a bid to find the hidden Artifact.

Players have to search the board for the treasure—while avoiding injuries, creatures, and other players seeking to stall their progress. The game comes out this May, and will cost around $US60 ($85). 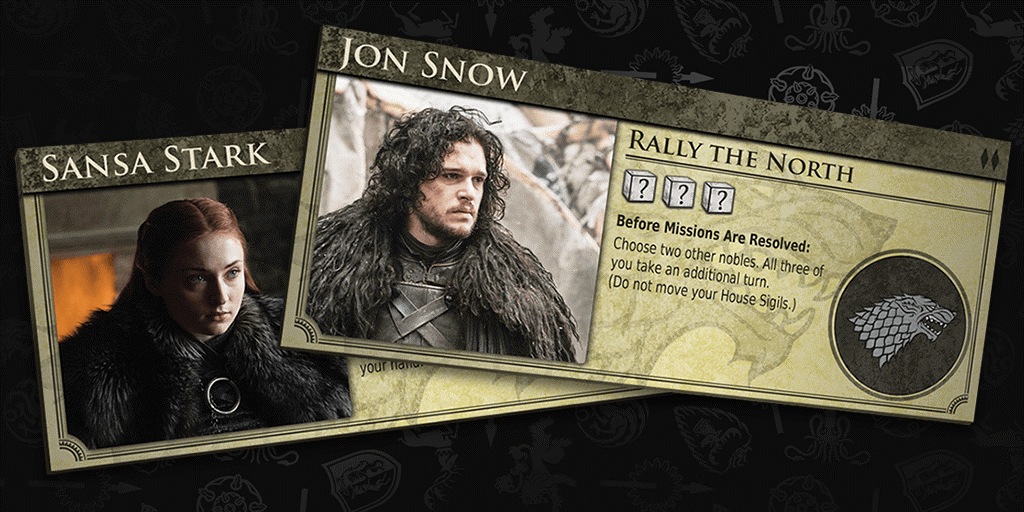 Oh yeah, because Jon’s been doing a bang-up job of that so far. (Image: Direwolf Digital)

Direwolf Digital (oh, the irony) has announced that its latest Game of Thrones card game, Oathkeeper, is now available for pre-order.

Players take on the role of different characters in the series, conducting a series of missions that can earn them money, power, or honour. The trick is that each player has their own objective—whether they want to seek the Iron Throne, support Westeros, or simply burn shit up—and it’s up to other players to try and deduce their true intentions. Oathkeeper comes out in May, and costs $US35 ($49).

Last year, Gale Force Nine announced that it would be working on a tabletop roleplaying game for Dune, thanks to a partnership with Legendary and Frank Herbert’s estate. But that’s not all. According to There Will Be Games, the company is also working on a reprint of the 1979 board game version of Dune.

Considered one of the great “lost games,” it was seen as being far ahead of its time in the board gaming community. The original designers have been brought back to work on the new release, and it should come out this summer.

Plaid Hat Games’ Guardians is getting a second expansion pack with Guardians: Retribution. It comes with four new heroes and 24 power cards, including a mercenary, a psychic, and a fighter equipped with a nuclear-powered thruster pack. It’s available for pre-order for $US15 ($21).

Fantasy Flight Games announced that its upcoming Super Star Destroyer miniature, measuring 61cm in length, has been delayed. The company said it’s due to the unique challenges of creating its largest miniature to date. The Super Star Destroyer was supposed to come out by March of this year, but it’s been pushed back to this fall.

Blood on the Clocktower

This one is not for the faint of heart. Blood on the Clocktower is a massive bluffing game for five to 20 players. A majority take on the roles of of Ravenswood Bluff’s citizens, who are trying to solve a puzzle and find a mysterious killer—who turns out to be one of the players, secretly working with their minions to continue their murderous rampage.

Blood on the Clocktower has already met its goal, and will be on Kickstarter through April 25. The minimum pledge to receive a copy of the game is $US79 ($112), and it’s set to be released January 2020.

District 9: The Board Game

Out of all the sci-fi franchises getting their own board games, this one surprised me quite a bit. District 9 is getting its own tabletop minatures game with District 9: The Board Game, a 2-4 player competitive game that takes place during the final three days of the film. Players lead their factions through the alien slums to try and salvage the tech that will help them secure districts and win.

District 9: The Board Game will be on Kickstarter through April 19. A minimum pledge of $US99 ($140) is required to get a copy, and it’s set to come out this December.

Widget Ridge is a fast-paced deckbuilding game where players use different steampunk-style machine parts for their inventions. They might work, they might not, but at least they’ll look cool. You can also conspire to destroy your opponents’ inventions, adding a sinister twist to the game. Widget Ridge has met its fundraising goal, and will stay on Kickstarter through April 27.

The base game requires a $US20 ($28) or more pledge, and it comes out this November.

I welcome roleplaying games designed to introduce younger audiences to the genre. I didn’t have that growing up, and I wish I had. Castles and Cats is a fantasy roleplaying game specifically for preschool and elementary-aged kids, teaching them about basic combat mechanics and roleplaying—in a safe and positive environment.

The art is cute and it seems like a solid start for parents wanting to get their kids into the hobby. Castles and Cats will be on Kickstarter through April 25, and a minimum pledge of $US20 ($28) is needed to get a digital copy, which should come out in November.

Folklore: The Fall of the Spire

Normally, I tend to avoid expansions in the crowdfunding section, unless they’re really special. This one was funded in minutes, and has blown up since. It’s the latest expansion for Folklore: The Affliction, called The Fall of the Spire. The expansion continues the adventures of the core game, with advanced combat and Town Events increasing the difficulty.

Folklore: The Fall of the Spire will be on Kickstarter, presumably collecting even more funds, through April 18. If you want a copy, it requires a $US60 ($85) minimum pledge and a copy of Folklore: The Affliction to play. The expansion comes out December 2020.