Konami’s New Arcade Collection Could Have Been A Lot Better

gradiushaunted castlekonamitwinbee
To sign up for our daily newsletter covering the latest news, features and reviews, head HERE. For a running feed of all our stories, follow us on Twitter HERE. Or you can bookmark the Kotaku Australia homepage to visit whenever you need a news fix.

Konami’s Arcade Classics Anniversary Edition is out this week, collecting eight of its classic coin-op games like Haunted Castle, Gradius, and Twinbee.

While the games and the emulation are solid, Konami has taken a strangely bare-bones, region-locked approach to the collection that makes it a lot less exciting than it could have been.

Here are all the games that are included in the $28.95 package, which is available for PlayStation 4, Xbox One, Switch, and PC:

One of the primary issues with Arcade Classics is that it only contains one version of each of its games. But arcade games often had multiple variations across regions (or even within them) with distinct, often major, differences in the graphics, sounds, and gameplay. Modern-day classic game collections generally include multiple variations of the games in an effort to give players their preferred version, or to let them play all of them and see the differences.

This isn’t a big deal for, say, TwinBee, which only had minor variations between its chipsets. But some games, like Gradius II and Thunder Cross, were actually quite different depending on whether you played the Western version or the Japanese version, for example.

These differences could be adjustments to the difficulty, or major graphic changes. Rather than being able to pick the one you want, you’re locked to one version.

The fact that this is happening with this collection is particularly baffling, since most of these games and their multiple versions are already available (on PS4, anyway) as standalone releases in Hamster’s Arcade Archives series. Since Hamster actually developed Arcade Classics Anniversary Edition as well, it would seem like the decision was Konami’s and not due to any inability on the developer’s part. 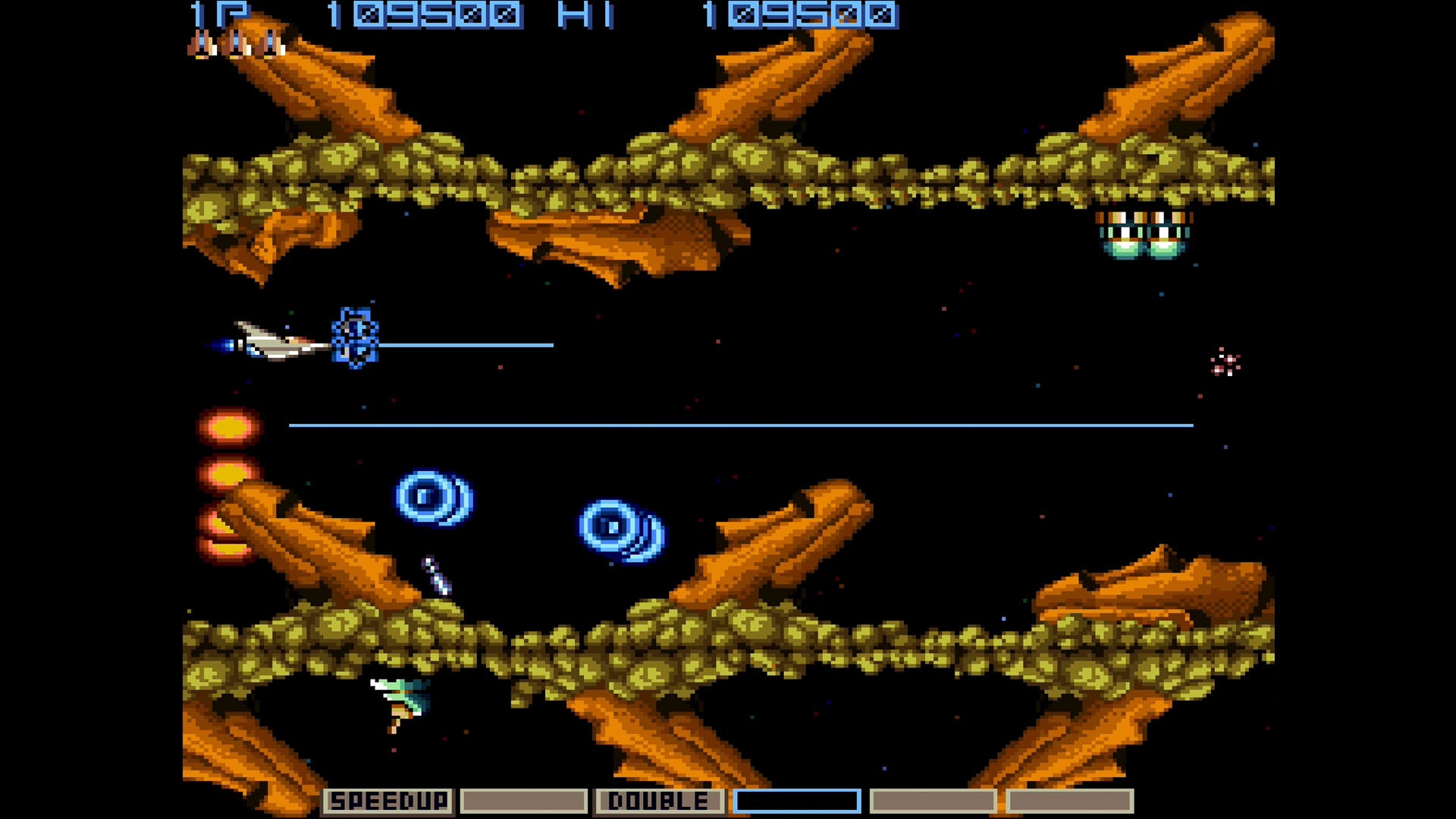 To be fair: In the case of Haunted Castle, an arcade version of Castlevania, the lack of regional selection would appear at first to be a bigger problem than it actually is, since the Western version was notoriously made much more difficult, with standard enemies taking off half of protagonist Simon Belmont’s life bar and having a limited number of continues.

But, playing through Haunted Castle via this collection today, I found that, even though it was the U.S. version, it had been tweaked to have unlimited continues and an option to adjust the difficulty. So it’s not as bad as it could have been had Konami simply used the U.S. version without tweaking it.

Additionally, you can’t play the vertically-oriented shooters in “tate,” or vertical, mode—not even on the Switch, where it would be most convenient since you can simply rotate the tablet to play them that way. Again, this is a feature already supported by Hamster’s standalone rereleases of these games.

At first, I thought that I might be able to try the Japanese versions of the games if I logged in to the game on my Switch using a Japanese account. That’s usually how it works with Switch games, which generally have all regional versions included in the same file. If you buy a game on the U.S. eShop, then log in to the Japanese eShop and look at that game, it’ll generally tell you that you already own it, because the file is identical between all the regions.

I’m not sure why Konami decided to hack up this collection into separate regional variations and give them fewer features than the individual Arcade Archives versions, but it’s made what could have been a definitive collection into something much less interesting. This doesn’t bode well for the upcoming Castlevania and Contra collections—it would have been fun to get to pick between the different versions of those games, too, but that doesn’t seem like it’s in the cards, now.