Mario And Zelda’s New VR Modes Are Not Good

the legend of zelda breath of the wildvr

Nintendo just added free updates to Nintendo Switch blockbusters Super Mario Odyssey and The Legend Of Zelda: Breath Of The Wild that introduce virtual reality modes to both games, but you’ll be perfectly fine if you skip them.

Mario Odyssey’s new VR mode consists of a trio of small custom levels that let you use Mario to quickly collect musical instruments for characters who eventually assemble to perform a special VR concert of the game’s main theme.

Breath of the Wild’s VR mode lets you play the whole game in a basic 3D view that does little to bring you further into its world.

Neither is much of an advertisement for virtual reality gaming in general and may serve as an indictment of the limits of VR on the relatively low-powered Switch. To play either game in VR, users need to slide the system into the cardboard and plastic goggles that are packaged with the new Nintendo Labo VR Kit.

The goggles are mostly fine, but the Switch does not seem powerful enough to generate a strong VR experience for either game. 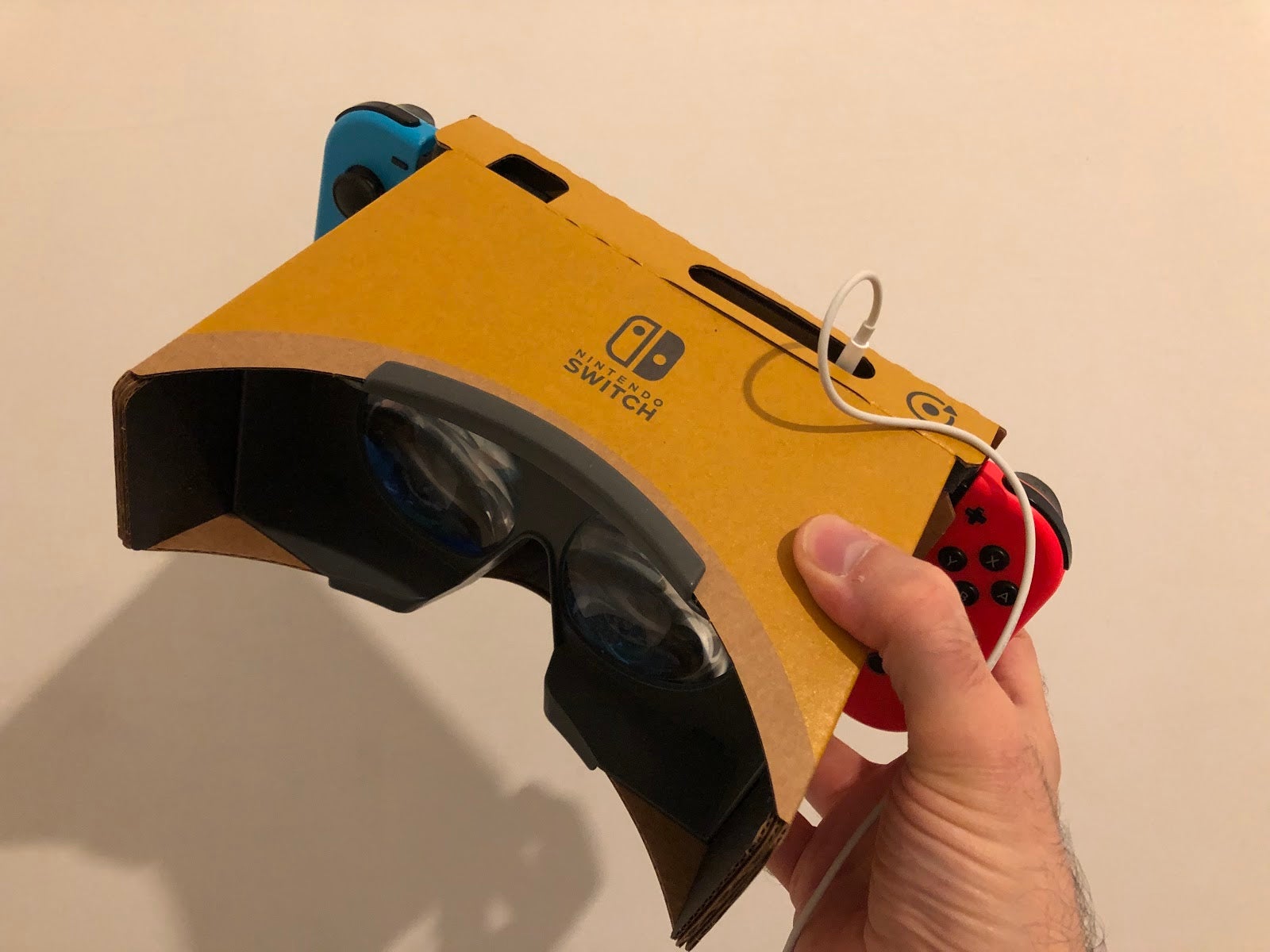 Nintendo Switch VR requires the Nintendo Labo VR goggles. While the goggles are mostly cardboard and therefore very light, the set-up necessitates that a user holds the system to their face. There is no headstrap, and the act of manipulating game controls inches from your face can be awkward. It is awkward for the Mario and Zelda VR modes.

VR gaming requires hardware to send split images, one to the left eye and one to the right. That’s why all the screenshots in this post, captured while I played the games in VR, show a left-eye view and a right-eye view. This split taxes even much more powerful hardware and leaves the Switch only capable of displaying games in a grainy resolution. Screenshots in this post look better, albeit flatter, than what I saw in VR.

The Switch version of VR also doesn’t track where the player is in a space, so it can only create the sensation of seeing a virtual world from a fixed location as opposed to more advanced VR tech that lets you move, at least a little inside a virtual space as you move your head or body.

The Mario Odyssey VR mode is separate from the main game. It is spread across three playable levels and a bonus interactive concert. The levels are set in the game’s Hat Kingdom, Seaside Kingdom and Luncheon Kingdom. Each is a custom version of the Kingdom that is set up to feel like the small virtual spaces surround the player.

To experience this, the user puts the Switch into the VR goggles, sits or stands while holding the goggles to their face, and then enters the Kingdom. 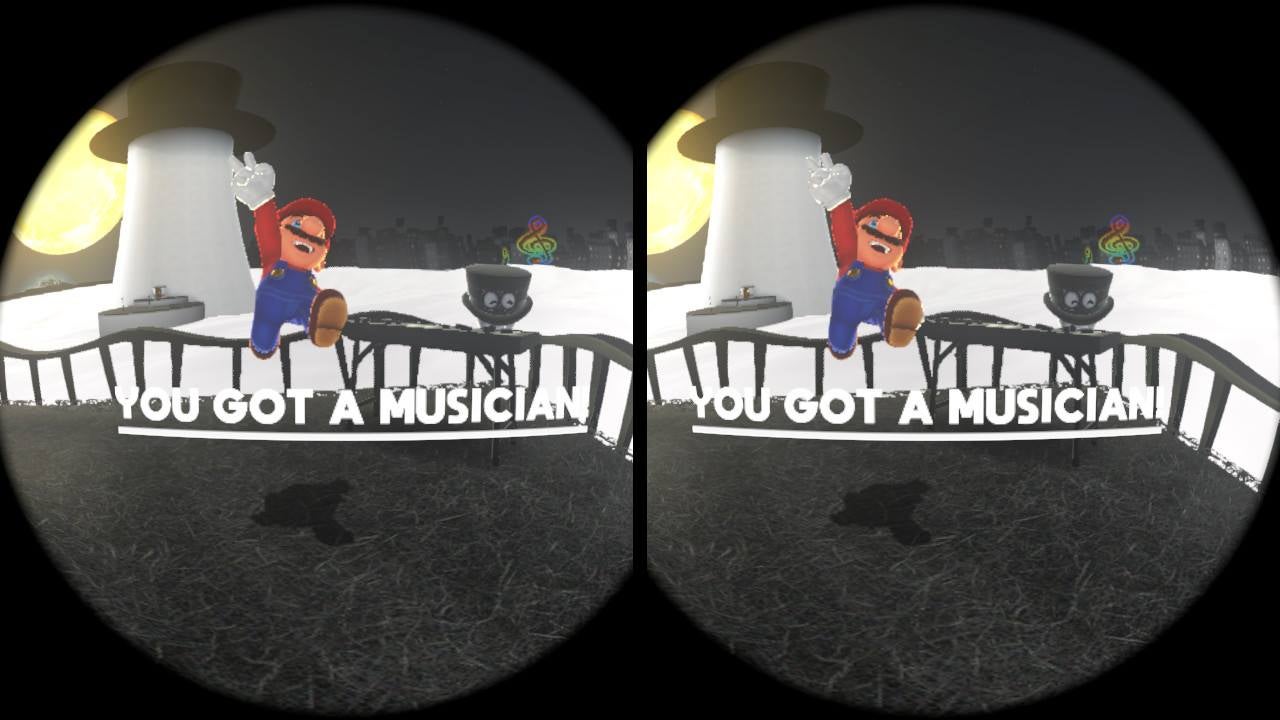 If you turn your head, you’ll find that the Mario Kingdoms appear to be rendered all around you. Your perspective is fixed in the center of them, as if you’re a surveillance camera in this special Mario world. All VR gaming inherently presents game worlds in 3D, which adds depth to what you can see. That said, being fixed in one location while having to run Mario all around the camera, often straying pretty far from it, doesn’t look that good and isn’t fun. 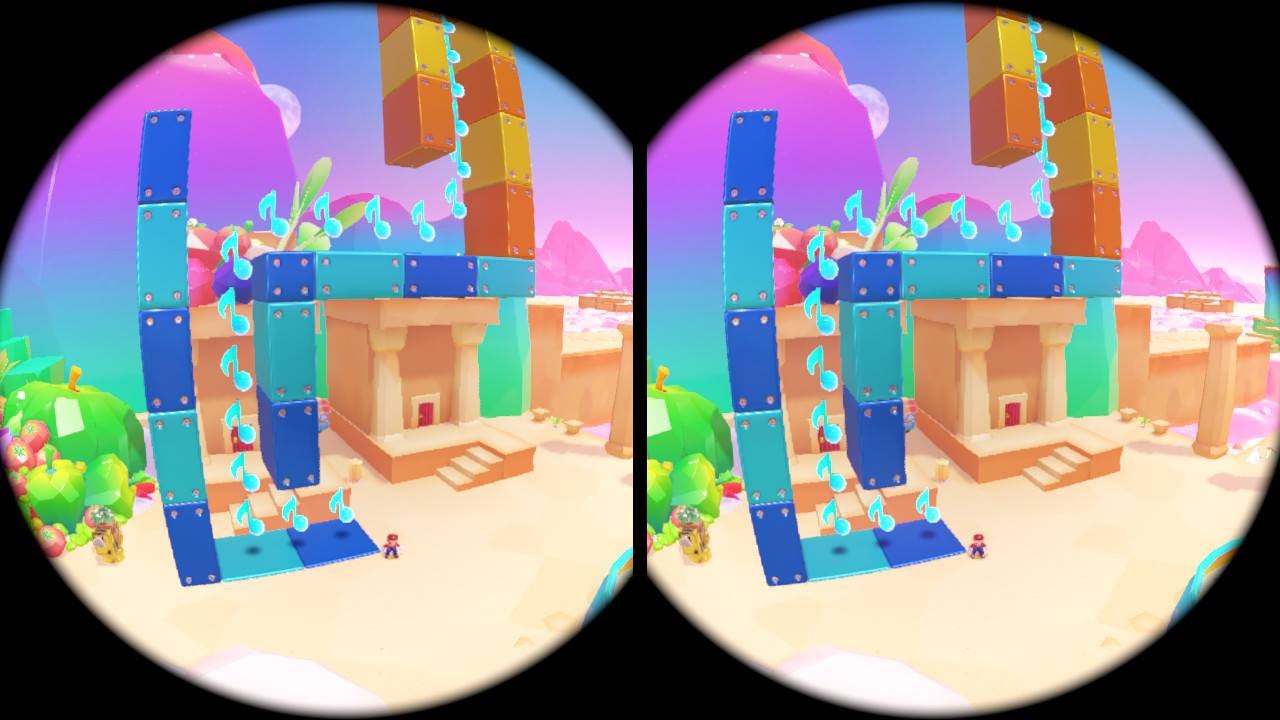 Challenges like this could look cool in VR if they didn’t seem so far away. Unfortunately, Switch VR for Mario Odyssey works with fixed camera positions. The sense of scale afforded by more advanced VR set-ups that allow for movement within a VR world, is limited here.

The Kingdoms are sprinkled with some simple challenges in which Mario collects musical notes, triggers the appearance of musical instruments and then hands those instruments to the appropriate musicians.

It takes just a few minutes to reunite the musicians in each Kingdom with their instruments. The reward is a New Donk City concert, in which Pauline belts out Mario Odyssey’s theme while players can make Mario hop through the crowd or jump on stage with the singer and her band. 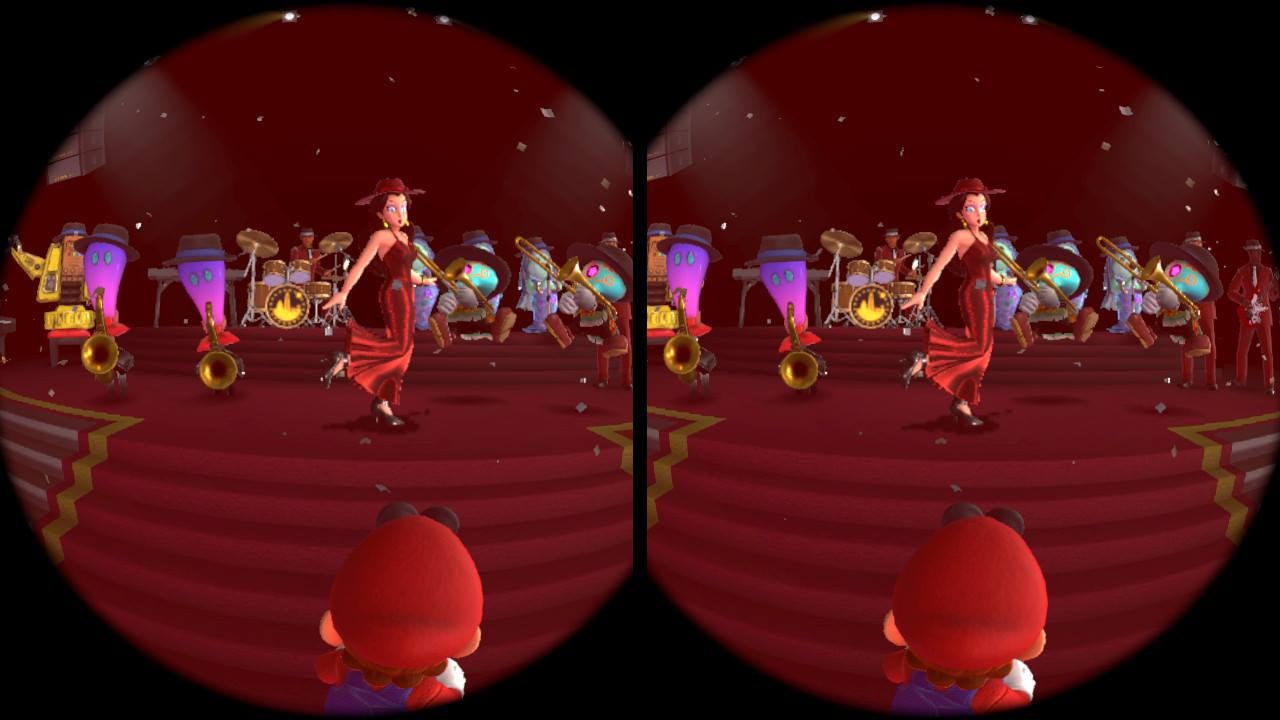 Look straight ahead and you’ll see the concert’s performers… 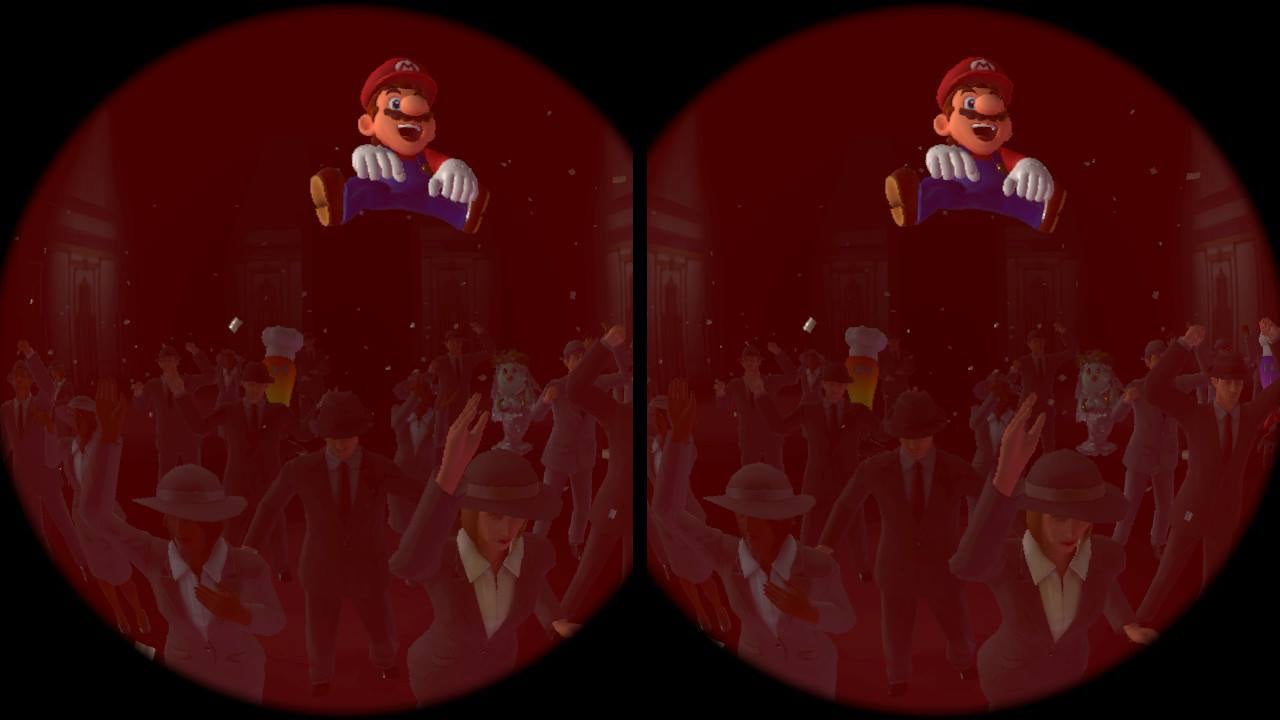 … turn around and you’ll see the concert’s audience.

VR can often at least convey the magical feeling that, wow, we’re inside this virtual place. That sensation isn’t very strong in Mario Odyssey’s VR modes, simply because there isn’t much of a spectacle surrounding the player. The graphics are grainy. Mario is alternately too close and hard to control or too far away and too tiny to enjoy seeing. The scale of the levels stands out only in the Seaside Kingdom, where the camera perspective is low and the height of a beanstalk that grows and of an umbrella-jumping challenge convey some sense of scale.

Breath of the Wild’s VR is also deflating. In theory, you could play through the entirety of this all-time-great game in the new VR mode. It’s a toggle from the game’s main menu. But to do so would appear to be folly. The VR mode for this game doesn’t immerse you in it. There’s no turning of your head to peer around at a virtual world around you.

Instead, Breath of the Wild’s VR offering amounts to presenting the game – through the goggles – with stereoscopic 3D depth in a perspective that stays fixed in front of you. You’ll feel like you’re a little closer to Link’s world, but the Switch isn’t able to—and likely can’t—render the world as if it surrounds you.

Instead, it’s more like you opted to buy the more expensive 3D movie experience but are still sitting in a theatre seat with the graphics locked in front of you. 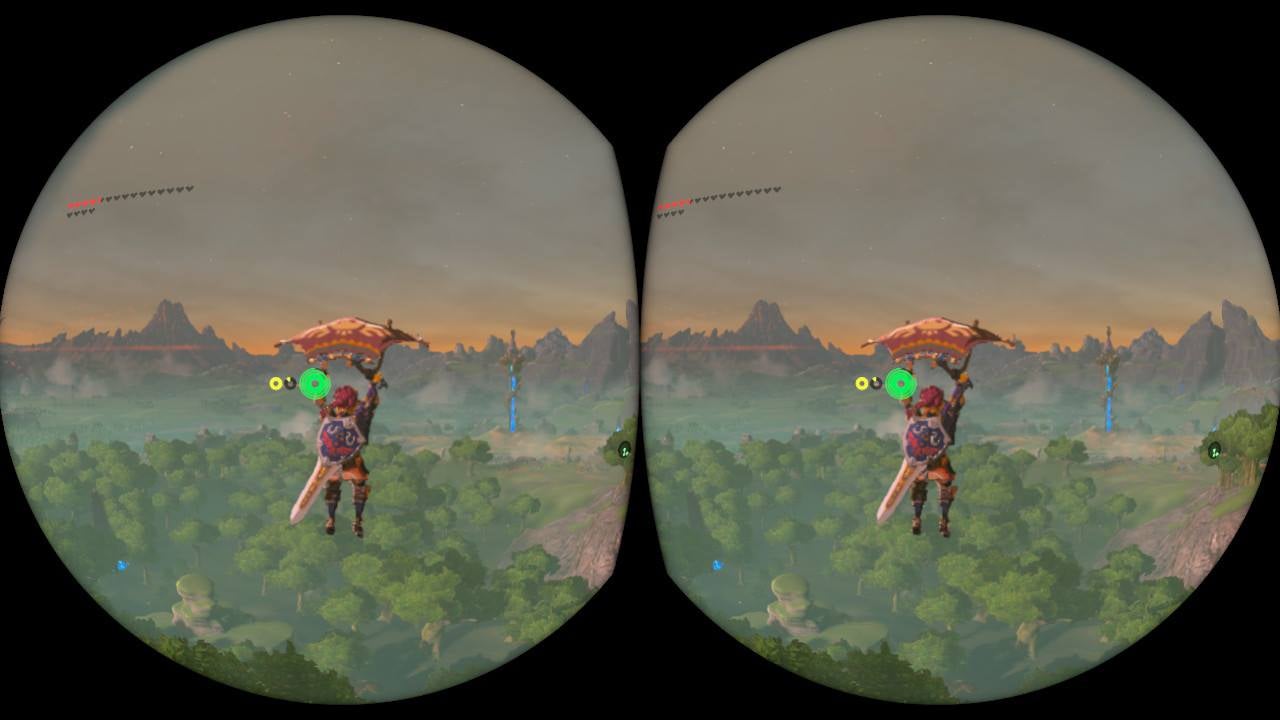 Like Odyssey, Breath of the Wild is much grainier in VR. It also has a stripped down interface that hides the game’s mini-map and makes the the health counter hard to read as its row of hearts bends out of the user’s peripheral vision. 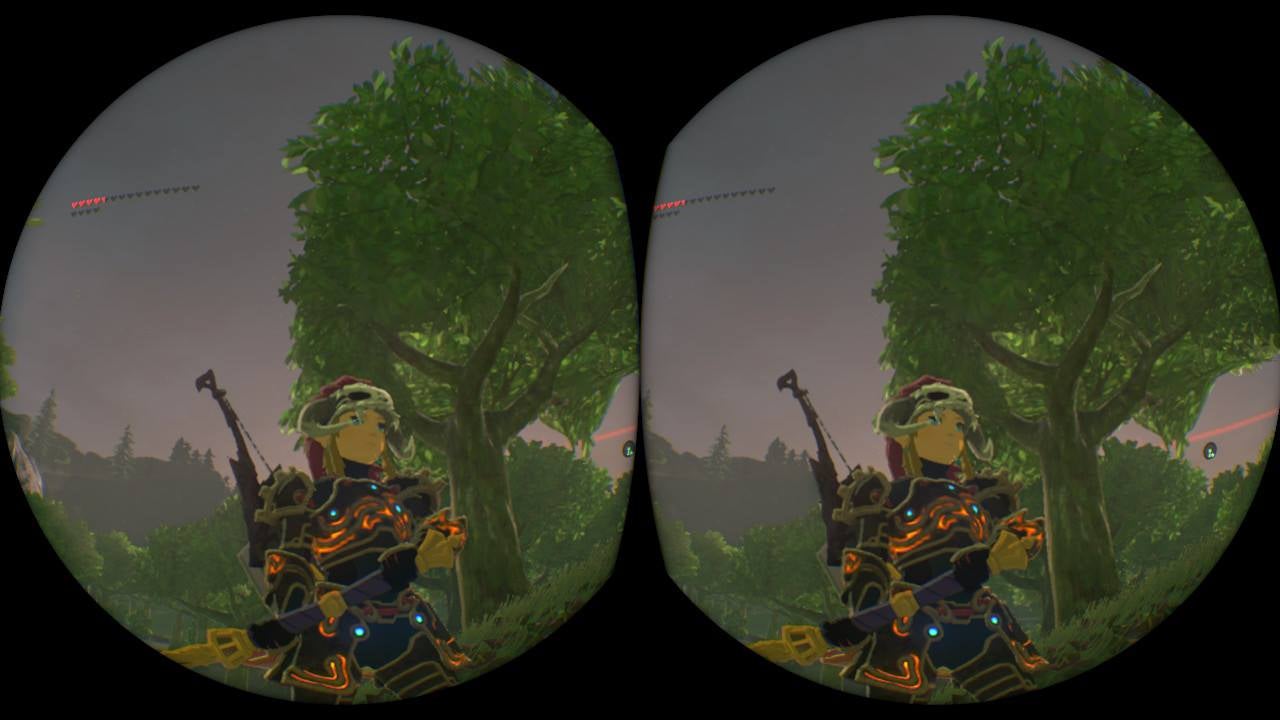 Breath of the Wild’s VR may bring you closer to the action, but that is offset by grainy graphics and a stripped-down user interface. 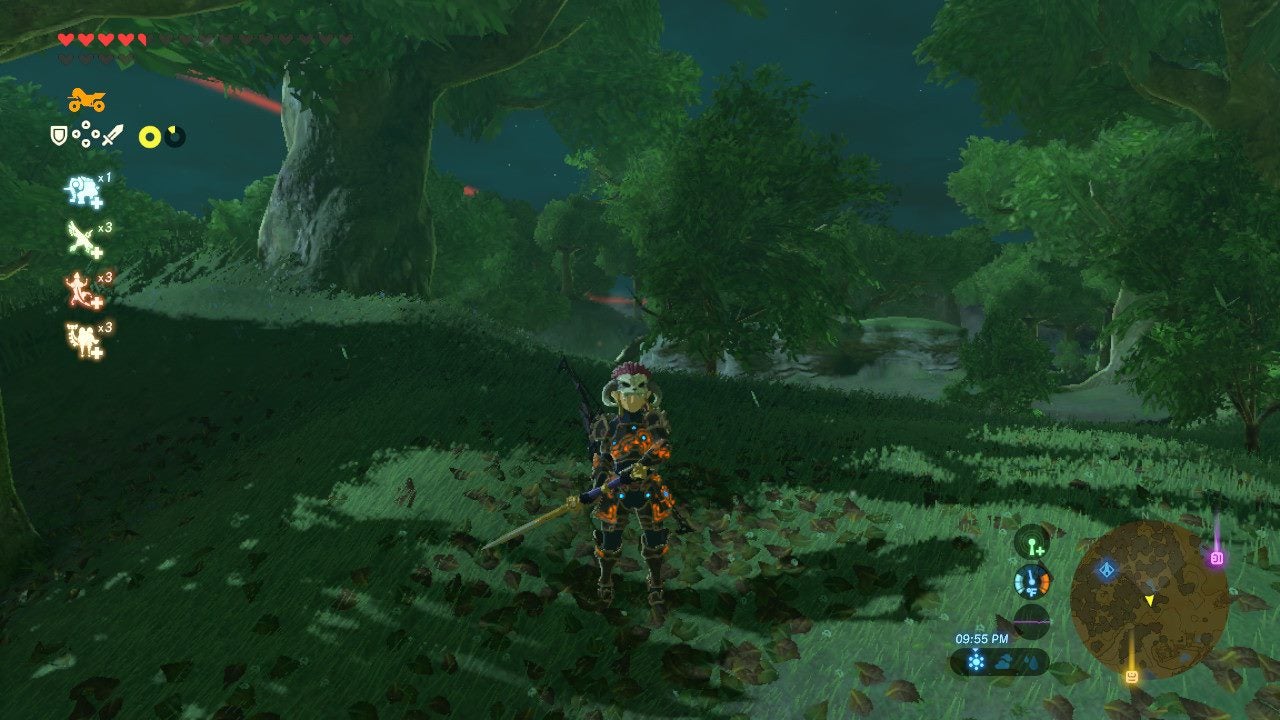 For comparison, a similar moment in Breath of the Wild not in VR.

Compounding the limitations I’ve already listed is the fact that VR for the Nintendo Switch is a considerable arm workout. The Labo kit’s VR goggles have no head strap. To use them, you have to hold the goggles, which, remember, are cardboard but contain a Nintendo Switch, up to your face.

It’s no wonder that Mario Odyssey’s VR mode repeatedly encourages the user to take breaks. That’s probably for arm health, but, phew, it’s tiring to hold the ostensibly light Switch up for five, 10, 15 minutes while running around in some Mario world. How would someone play the entire Zelda game this way?

Well, Breath of the Wild’s fixed camera angle – the fact that turning your head doesn’t change the angle at which you see the game world—means you can at least lay on your back and play while holding the goggles to your face. Note that the Switch’s controllers need to be affixed to the system, so you’re playing while basically holding the controllers near your cheeks. It’s weird and not at all a good way to play on Switch. 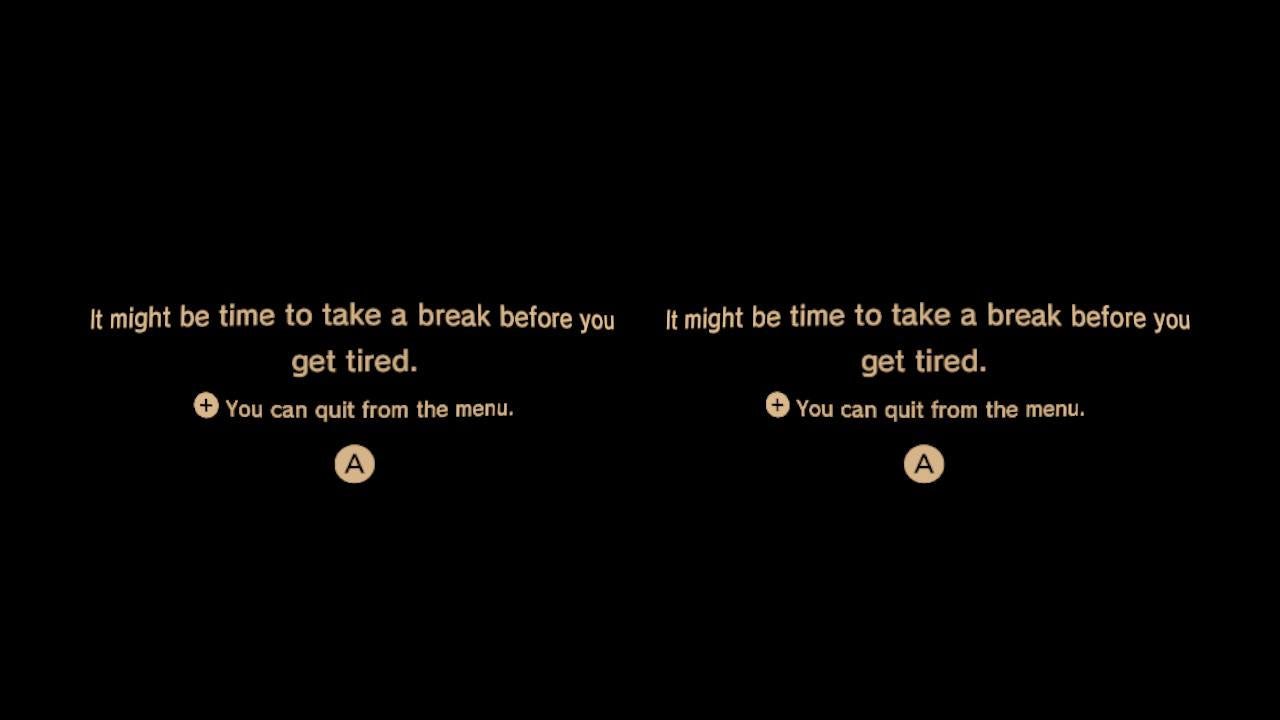 If there’s one thing Nintendo’s Mario VR is great at, it’s warning the user to take breaks.

VR game design is still a young format. Top developers struggle to provide gamers with great experiences in this ostensibly magical tech that lets us get inside a virtual world. It was exciting that Nintendo was going to try, first with its custom Labo VR games but then also with VR for its two flagship franchises.

Sadly, even the brilliant minds of Nintendo weren’t able to tack great or even good VR onto their Mario and Zelda games.

Seeing these game worlds in the kind of VR that the Switch can render just isn’t exciting. Nintendo has surely heard this before, but given the lacklustre results of VR for these Nintendo titles, may I humbly suggest they try something else? Perhaps, VR Pokémon Snap?