My Journey To Photograph All The Wildlife In The Division 2

I remember the first time I saw a deer run past me in The Division 2. It immediately made the game feel different than the previous The Division. Sure, that game had some dogs in it. But now I could encounter deer. I wondered what else was roaming the streets of D.C.?

To find out, I began my journey to photograph every animal in The Division 2. It was harder than I expected.

I can’t tell you what kind of deer this is specifically, but it is certainly a deer. These were relatively easy to photograph. They regularly run around the world, occasionally even running into buildings even.

That image of a deer at the top of this post came from a random encounter. I found a deer stuck on some geometry, at night, next to a spotlight on the ground. It was perfect timing.

I snapped a picture and then the deer kept staring at me. It didn’t move or leave. It just stared. I left the area but I don’t know if that deer ever escaped their fate. Maybe I should have shot it? 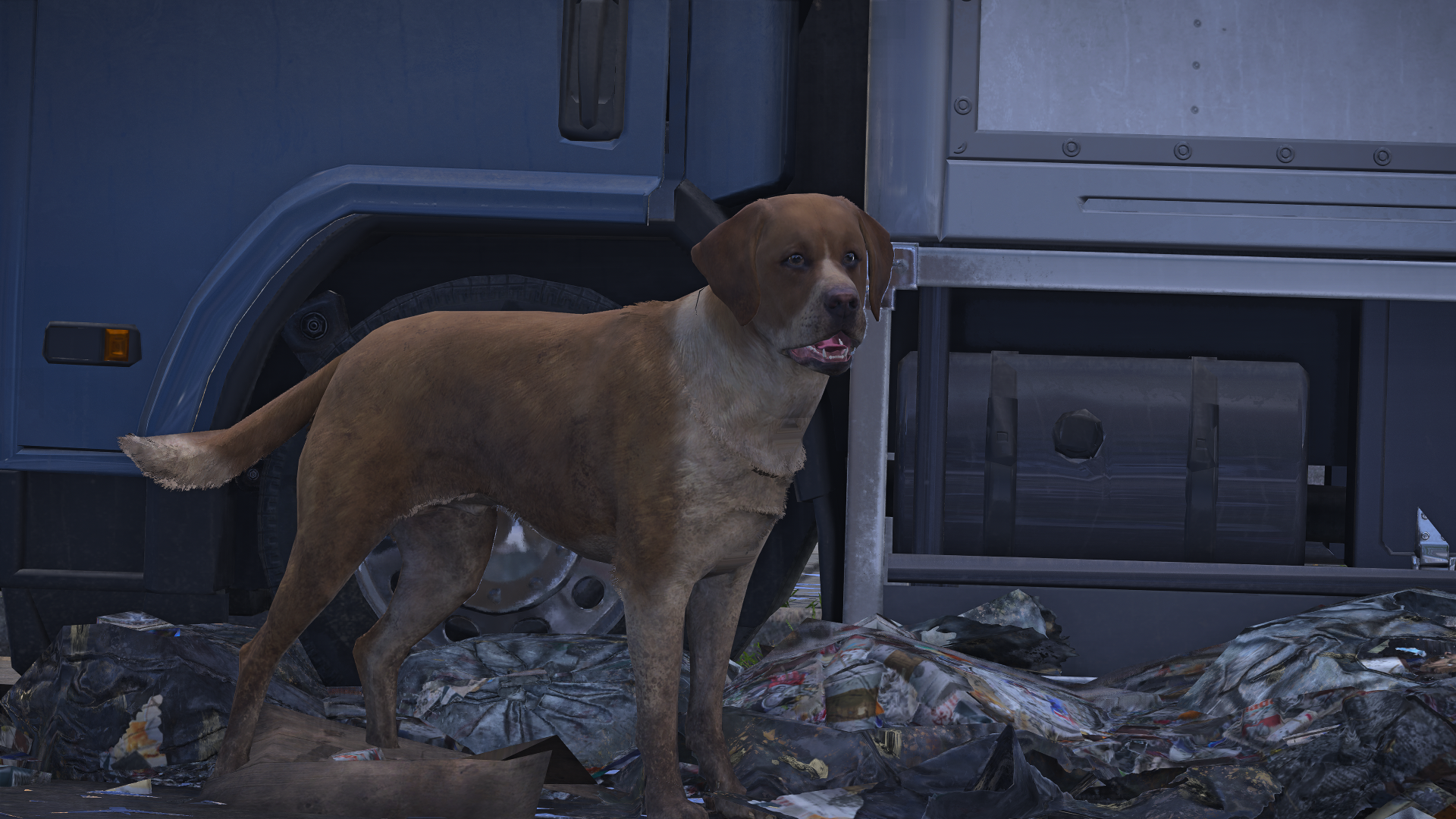 Everyone loves some good pups. Sadly, it is true that you can’t pet these loveable hounds, but even if you could I don’t know if it would be possible.

These dogs are super jumpy. Which is fair. They live in a world where every day hundreds of people shoot guns all the time. I would be jumpy too. 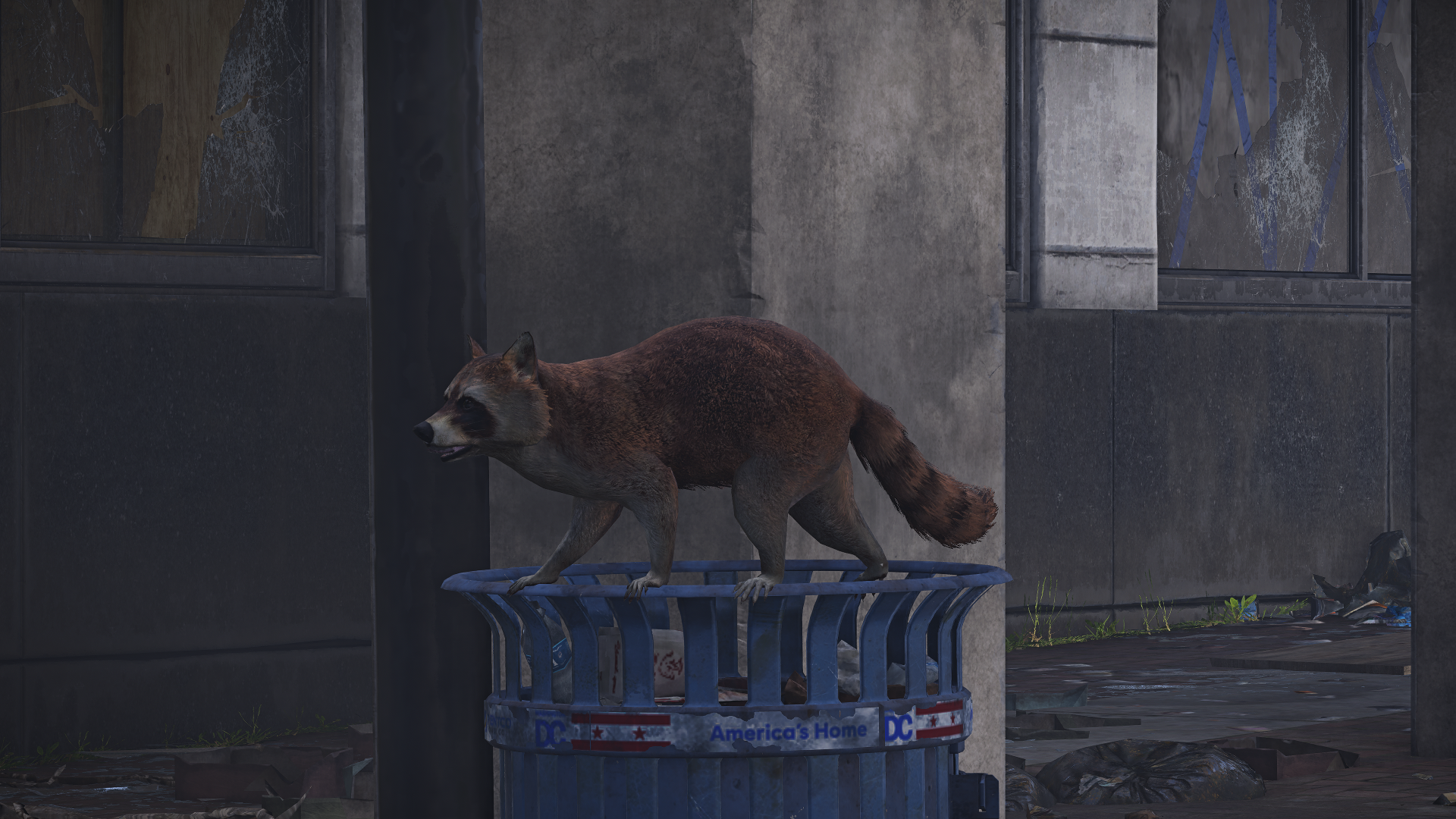 Trash pandas, as the internet loves to call them, aren’t nearly as numerous as dogs or deer. These critters are a bit more sneaky. I did notice more of them at night, but that might just be a coincidence. Trying to grab a nice photo of them was difficult because, like dogs, they are very jumpy. But they are also smaller and harder to spot, which makes getting a good photo of them hard.

This is because the photo mode in The Division 2 takes a few too many seconds to open up and the camera is limited how far it can move around the area.

So to get this photo, I had to creep up, open photo mode, move the camera as close as it would let me and zoom in. If I wasn’t close enough I had to creep up closer and repeat the process. Eventually, I got a nice photo of a raccoon finding some lunch on top of a trash bin. Even quicker and jumpier than dogs, these little wild and red pups were hard to spot as I was running around. When I did spot them, I would sometimes spook them just by walking closer to them.

Though I also had to deal with something most wildlife photographers don’t have to deal with: Numerous armed enemies roaming around, shooting the moment they saw me. There were a couple of times where I spotted a fox, walked closer and got my camera ready when suddenly gunfire would start peppering my location.

The fox was gone and I had to duck behind cover and kill a dozen armed thugs before I could continue my safari. But after a few frustrating encounters, I took a nice photo of a lovely little fox. 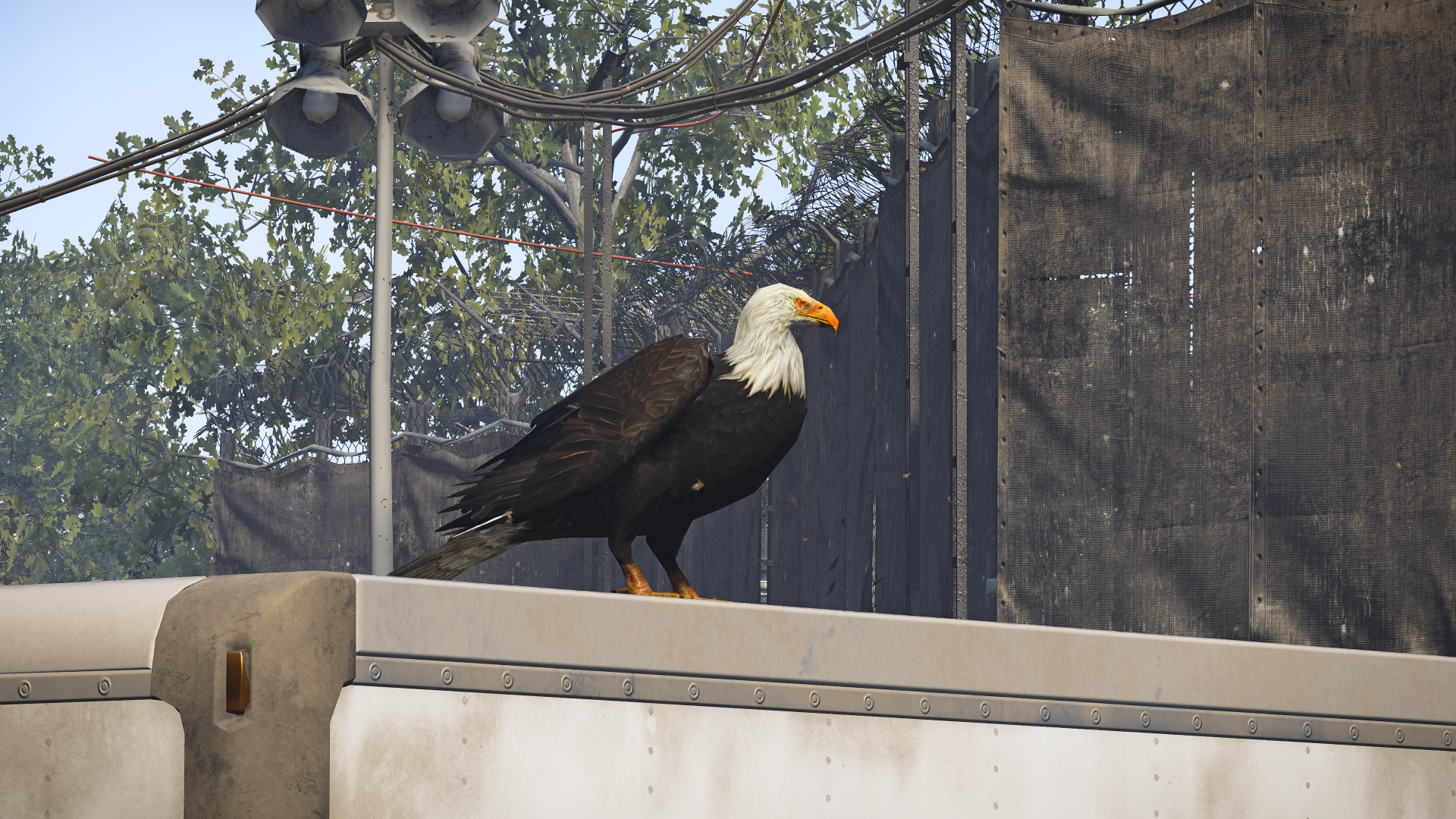 Of course, you can find these patriotic birds in The Division 2. They seem to be somewhat rare or at least in my time with the game they don’t pop up often. So it took me some time to finally snap a photo of one of these majestic birds.

I hope that as humanity dwindles and kills itself in this wasteland, the eagles and other animals prosper. Take the world back, eagles. It’s your turn after we screwed everything up. Sorry. 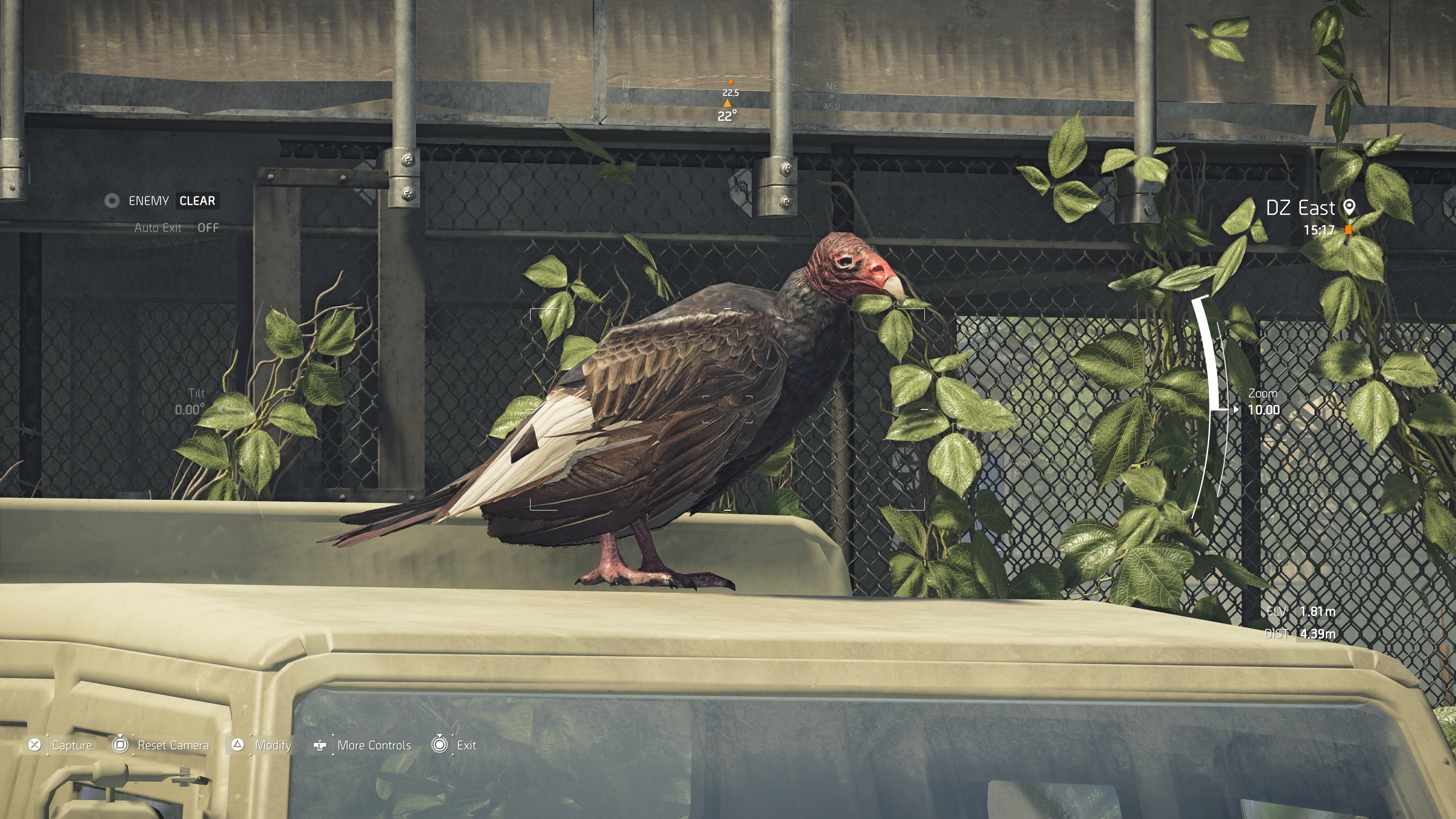 I spotted many of these in Dark Zones, which make sense. These zones are filled with lots of dead bodies and decomposing corpses. It must be a wonderful smorgasbord for these ugly birds. But in the Dark Zone it can be difficult to get a good photo, considering all the other players running around and shooting people.

At one point I found a vulture, moved closer to capture a photo of it and then a random player jumped out from behind a building and shot me in the face two-hundred times with an SMG.

The vulture flew away and I bled out in the streets as a jerk took all my loot. Later on, I was able to find a vulture in a more quiet area and got a nice picture. 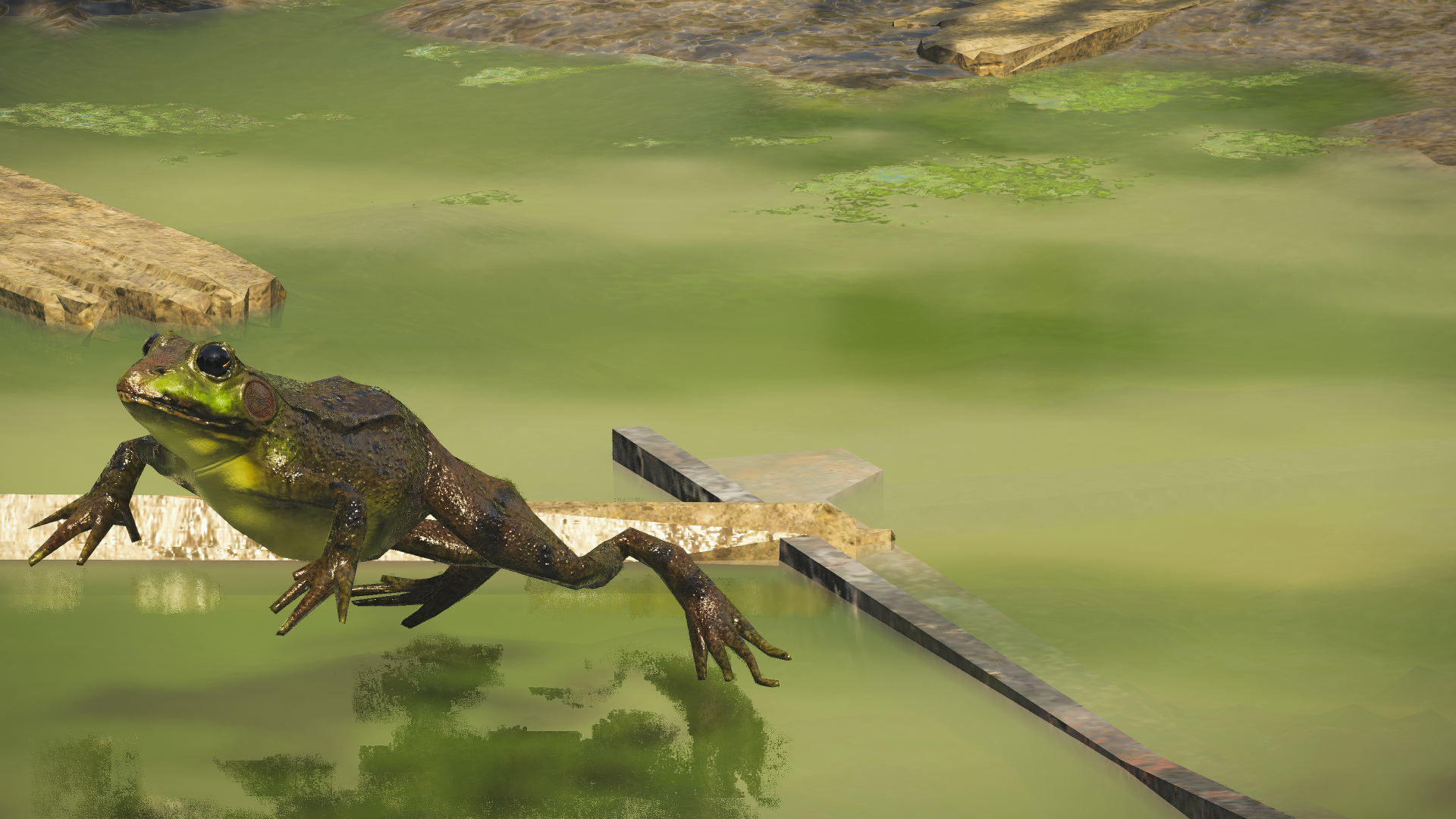 On the one hand, frogs in The Division 2 are fairly easy to find. Most ponds and small bodies of water in the game will have some frogs hanging out in them.

The trick is getting a good photo of a frog. You see, in The Division 2 frogs are apparently able to teleport through space and time. This made it hard to snap a good picture of these little amphibians.

I also found frogs sometimes hopping through the ground or nearby logs. I ended up spamming a bunch of captures and found one worth sharing. I was searching for another animal, who I’ll talk about later, and was having no luck. So frustrated and needing a break, I left my character standing in some water and grabbed a drink.

When I returned and sat down, I sipped my lovely cup of tea and noticed something in the water. Or actually, multiple somethings.

There, beneath the surface, were fishes. They look like perch to me, but I’m probably wrong. Like the frogs, these fish have the ability to teleport, but unlike the frogs, they move faster. A lot faster. I almost missed the goats in The Division 2. They only appear after upgrading The Campus settlement. They can be found in the back corner of the area, near the main entrance. I only found them because I was walking around the camp, looking for something else.

Suddenly, I found a few goats just chilling in a small pen. After snapping a quick photo, I left and re-visited other areas of the map and looked closer. I didn’t want to miss any other animals who might have been overlooked. 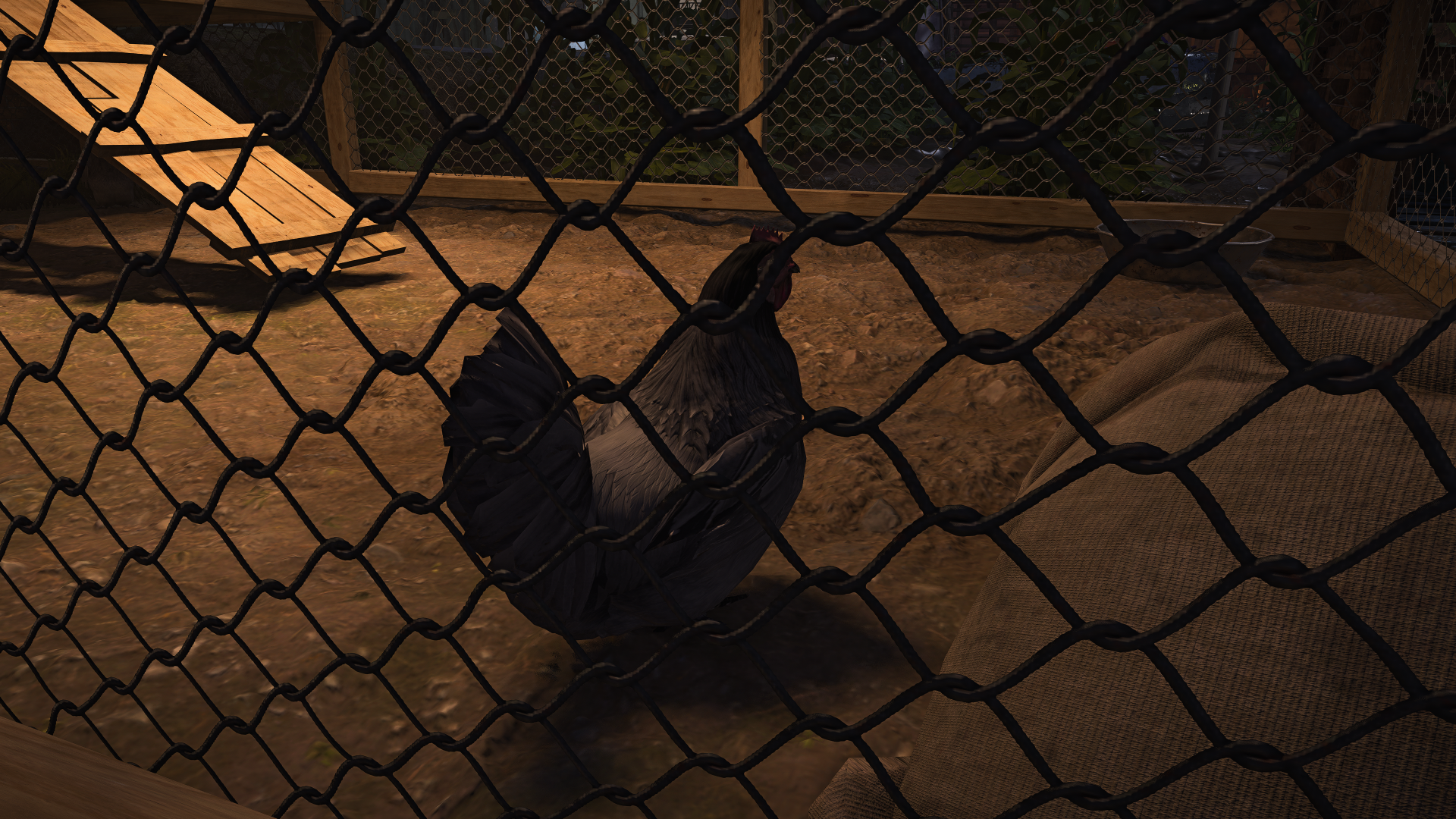 Near the goats, I also found a metal pen containing some chickens. Like the goats, I was shocked that I had missed these creatures and almost didn’t include them. Getting a good photo of these little flightless birds was hard.

The fence they are surrounded by makes it difficult to get a good and clean photo of them. So, excuse the wire fencing in the image. I did my best. 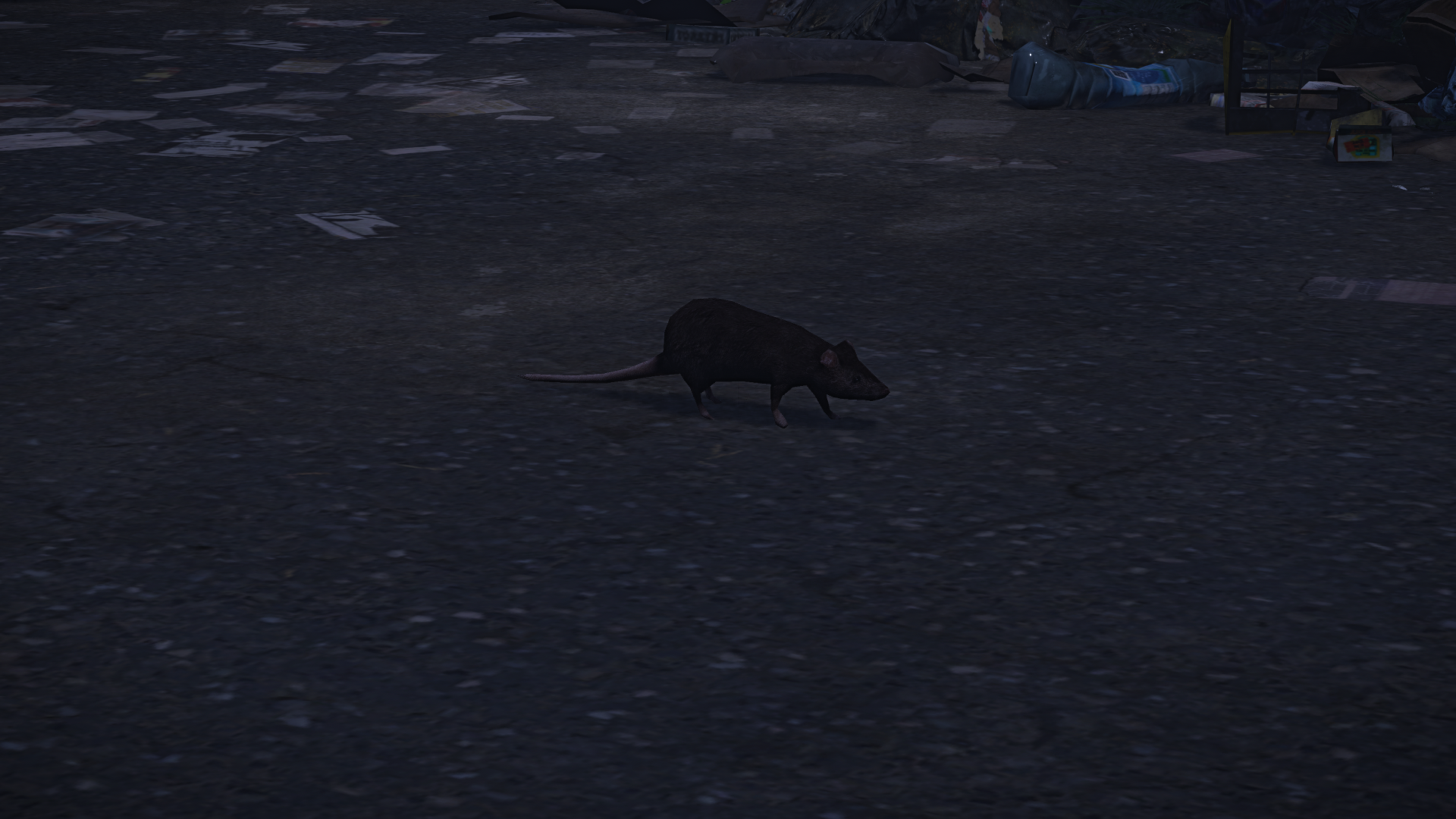 Look, I know rats aren’t the most exciting or cutest critters in the world but they are still animals and I wanted to capture every animal.

As far as rats in games go, these rats look pretty good. In fact, most of the animals in this game look impressively detailed, considering you rarely get a close look at them. There are bees in the game. I don’t know what else to tell you about them. I guess I could make a Bee Movie joke. I won’t. But I could have.

Yup, these are flying around the world too. Like frogs and fish, they seem to teleport and disappear randomly. Luckily, nobody cares because they’re just dragonflies. 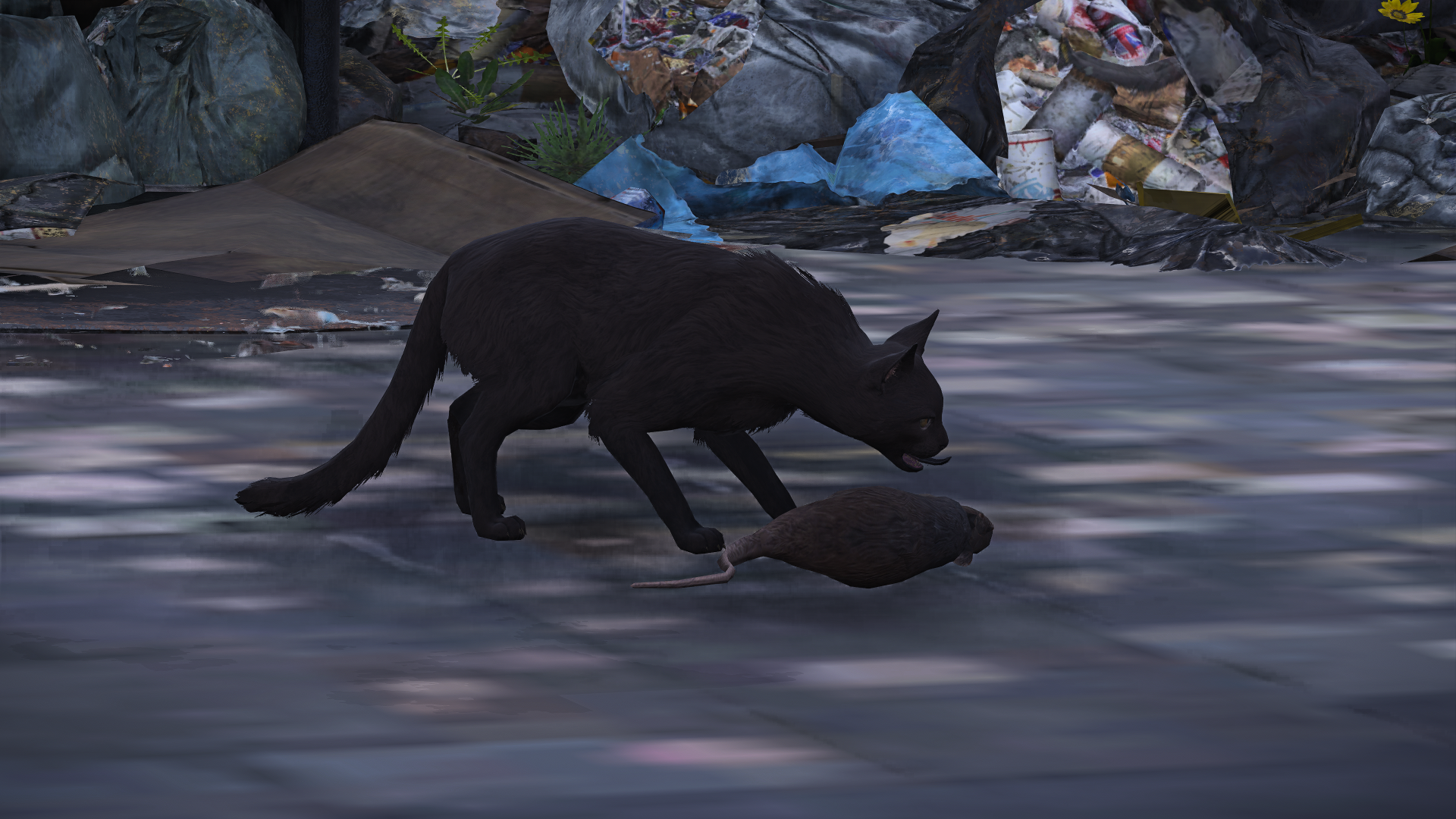 Go to hell, cats. I don’t understand why cats hate me in The Division 2, but they do. I spent hours looking for cats. Sometimes I would see one, get close, ready my camera and discover it was actually a fox. They are similar sizes in this game and even have similar animations. Eventually, I gave up looking for cats. I figured I would photograph everything else and maybe come back to them.

Then, randomly, while in the middle of a mission and not even looking for any animals, I spotted a small animal near me. I stopped dead in my tracks. I crept up, slowly. I stopped.

My heart was racing. I got my camera out and snapped like 20 pictures. I finally had captured the elusive cat. In retrospect, it makes sense that cats would only show up when they wanted to. I’ve owned many cats and this is common cat behaviour.

I saw pigeons, but could never get my camera out fast enough to snap a pic. They are so small that I was never able to pick them out from afar. I gave up on pigeons. They look like pigeons.

Ducks might exist in the game. I hear them, I think. I don’t know. Ducks are turning me into a maniac. I spent too much time wading through ponds and pools, looking for ducks and came back with nothing. I never even spotted one. Maybe they don’t exist? I don’t know. I’m moving on with my life.

I was surprised by how many different types of animals I found while exploring The Division 2 and who knows, there might be a few I missed. It wouldn’t surprise me. As I learned with the goats and fish, it can be very easy to overlook or never see animals that are right there, waiting to be photographed.