Our Early Look At The Sonic Movie Included A Very Extra Dr. Robotnik And That Famous Hedgehog

Few movies on the upcoming slate have everyone as curious as Sonic the Hedgehog does. How the hell is a game about a blue creature buzzing through levels collecting rings going to be a narrative movie? And what the heck does that look like? Well, at CinemaCon 2019, Paramount Pictures answered that question by showing not one but two trailers for the film directed by Jeff Fowler.

The first trailer starts with a police car sitting on the side of a road in a town called Green Hills, just keeping an eye on traffic. Just then, a blue streak goes by and the gun reads 1,223km/h. The officer, played by James Marsden, can’t believe it. Cut to the Paramount logo which, instead of stars around the mountain, had gold rings.

The camera is zooming down a street, then through a forest, as a tagline similar to “Every hero has a Genesis” graces the screen. The camera enters some kind of lair filled with a bunch of crappy worn out shoes. Back on the street, a blue being is stretching. It’s revealed to be Sonic, who is probably about four feet tall, wears no clothing (save for his shoes) and has a well-defined — I almost want to say cute — face. He shoots off running, creating a huge explosion of energy.

Marsden’s officer finds Sonic in a house and is startled by him. Later they’re in a car together and Sonic explains he’s here to save the world. Meanwhile, a large tank comes up behind them, so Sonic jumps out of the car, races at the vehicle, and smashes through it. He thinks he’s won, but then another vehicle drops from the remains of the previous one. Many more shots follow including one of Marsden’s character falling and Sonic creating a ring for him to fall through, which saves him.

In another scene, Marsden’s character, along with one played by Tika Sumpter, sneak into a building. Sonic is stuffed in a gym bag and Marsden tells him to be quiet. Sonic says he can’t breathe in there. He keeps fidgeting and someone says, “Do you have your child in there?” No, Marsden says. It’s a child, but not his child.

Cut to Sonic on the side of a building, a huge spaceship-looking thing shoots what seems like hundreds of guns at him with tons of bullets flying. But Sonic doesn’t sweat it. He just stands there, says “Oh look, I took nine million steps today,” and then starts disabling all the weapons in slow motion. The footage ends with a brief look at Jim Carrey as Dr. Robotnik who finds a blue strand of hair filled with electricity. 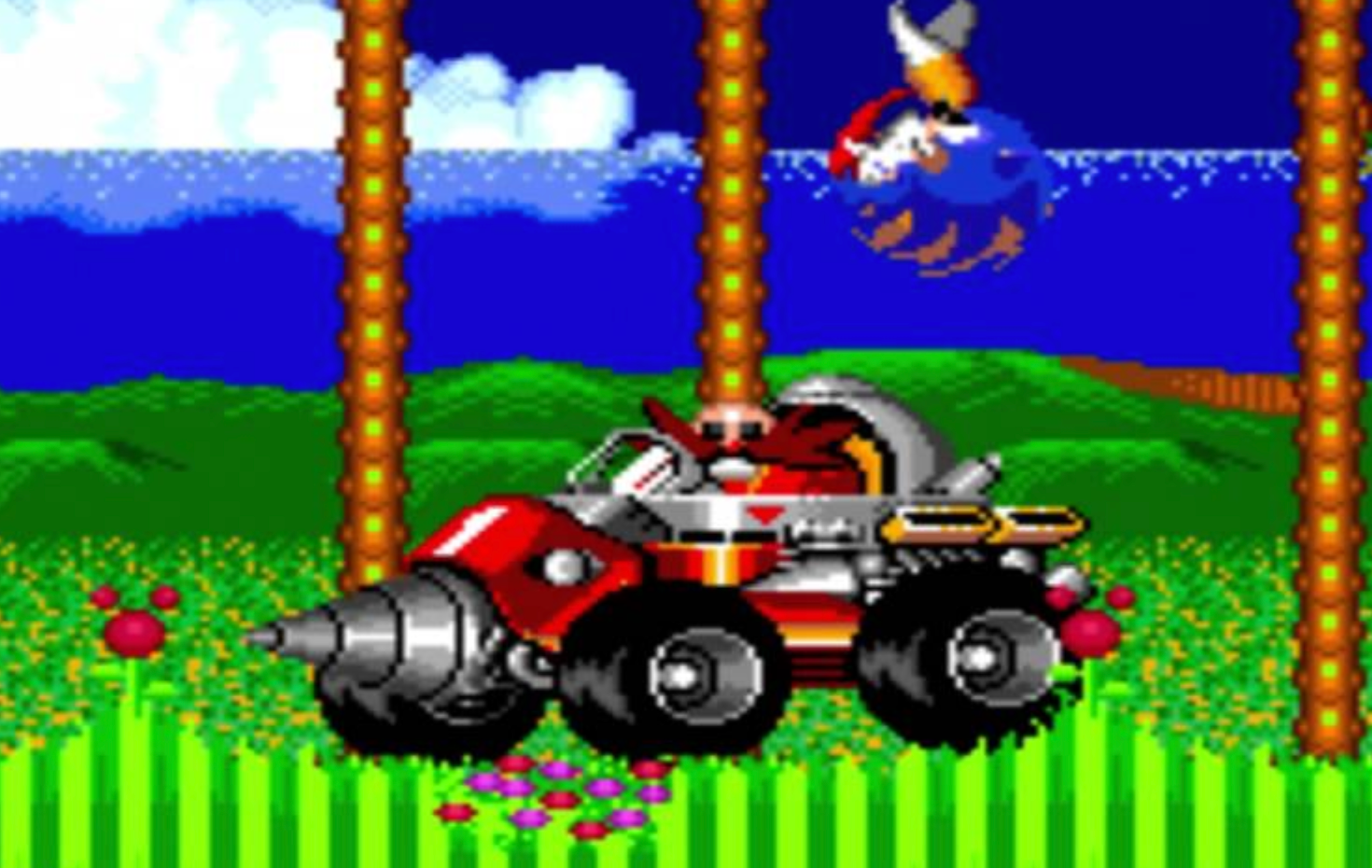 When the lights came up at CinemaCon, Carrey took the stage. He demanded Paramount show more of his character so, the lights went back down, and we were graced with a second Sonic trailer, this one focused on Dr. Robotnik.

In his main form, Dr. Robotnik looks like a mad scientist. Dark hair, thin handlebar mustache, and dark black clothes. The military is tracking some kind of electric anomaly (Sonic, we presume) and, very cautiously, call in the only man with the expertise for this kind of thing. Robotnik arrives and immediately takes control of the operation. But not in a respectful way. Think Ace Ventura. Loud, boisterous, a little annoying, that’s Carrey’s take on the character.

He’s got an assistant and he explains they need to catch this creature, dissect it, and find out what makes it tick. There’s a scene of him dancing to “Everybody Dance Now” by C+C Music Factory in his lab, only to be interrupted by his assistant who has a latte for him. He meets Marsden’s character and gives him shit. Finally, in the final shot of the trailer, we see the character as you remember him from the video game, with a bald head, larger mustache, and a red shirt.

Wow. OK. So, overall, Sonic the Hedgehog is a lot to take in. The character, at this point, doesn’t look great effects wise, but it’s certainly on the way to being kind of a charming, sci-fi sidekick in the mould of maybe Paul from . He’s not quite E.T. but, I think that’s what they’re going for.

From what we could glean of the story, it’s about an alien saving the world from an evil doctor with the help of some humans and the footage had a lot of scope and style, which reminded me of the Michael Bay Transformers movies. Could all of this work? Absolutely. We’ll find out in a few months.

Sonic the Hedgehog is set for a November 28 release.