I never know exactly how I’m going to approach each new battle in SteamWorld Quest: Hand of Gilgamech. No matter how much I plan and prepare ahead of time, I can’t control the cards that end up in my hand in this turn-based role-playing card game. Perfect optimization is always a few steps out of reach, but developer Image & Form make grappling with those limitations a lot of fun.

SteamWorld Quest, out Thursday on Switch with additional platforms to be announced sometime in the future, is woven into the SteamWorld universe as a bedtime fairy tale told to children. The story follows a group of aspiring heroes as they try to prevent evildoers from awakening ancient, dark powers that threaten to destroy the world.

Your party explores dungeons, defeats enemies, and collects treasure. There are save points before bosses, and conversations between characters after them, but at the centre of the game is an elegant machinery of deck building.

Image & Form has been taking classic genres and dressing them up with cute robot characters going back to 2010’s SteamWorld: Tower Defence on the DSi Shop. Where SteamWorld Dig took on metroidvania exploration and SteamWorld Heist re-imagined turn-based tactical gameplay, SteamWorld Quest combines elements of card-based roguelike Slay the Spire and gruelling explorer Darkest Dungeon to create a softer, more approachable, but no less intriguing variant.

Where in those games it’s easy to hit a wall or fall to their extreme difficulty or cruel odds, SteamWorld Quest offers the thrills of theory crafting new decks and character builds without punishing you to much for occasionally choosing the wrong ones.

At the beginning your party consists of three members—Armilly the knight, Copernica the alchemist, and Galleo the craftsman—but they soon make other friends, each with access to a unique library of cards stylised to resemble old computer punch cards (keeping with the series’ steampunk aesthetic). These cards are used to perform actions during battles.

Each character can equip eight cards. With three characters in your party at a time, your deck is always 24 cards deep. Six of those will be in your hand at any given time, presenting you with a limited but varied set of options for how to proceed. You can craft new cards along the way, and you’ll also find some in chests or throughout the course of the plot.

There are three different types of cards. Strikes are basic damage-dealing attacks, such as Galleo’s Steam Punch. Upgrades bestow secondary effects, like Copernica’s Mana Barrier, which gives a character a damage absorbing shield. Skills are extra powerful cards that do all kinds of helpful things, like heal your party or wreck the opposition, but they cost a certain number of gears, the resource you accrue throughout battle as Strike and Upgrade cards are played.

The normal pace of playing cards can sometimes feel a bit slow, especially given how tanky enemies can be. Standard encounters last for several minutes. To help with this, the game has a fast-forward button, one I ended up holding down throughout every fight (you can also toggle it on or off in the settings menu).

You can play up to three cards each turn, with the corresponding character the card belongs to performing the action. For example, I might play Armilly’s Strike card to have her attack an enemy, then have Copernica use her mana barrier Upgrade card to give herself a shield, and finally use the two gears I earned from those cards to play Galleo’s Repair Skill card and heal someone.

After those actions occur, enemies play their own cards. At the end of the turn you draw three more cards from your deck to replace the ones you just used. Once the deck is depleted, the used cards get shuffled back in. Twice per turn you can mulligan one of the cards in your hand. This is helpful for when you need to heal and only have attack cards, or are facing a fire-based enemy and need to hunt for that pesky blizzard spell.

Characters also have hero abilities, which are special bonus cards that automatically get played every time you use three cards from the same hero in a single turn. For instance, Copernica’s starting hero ability gives everyone in the party a shield equal to a quarter of their health, which can be life saving. Hero abilities change up the standard calculus of attacking and healing, encouraging you to search for card combinations that might be suboptimal on their face but are worth it when taking into account the hero ability they’ll trigger. 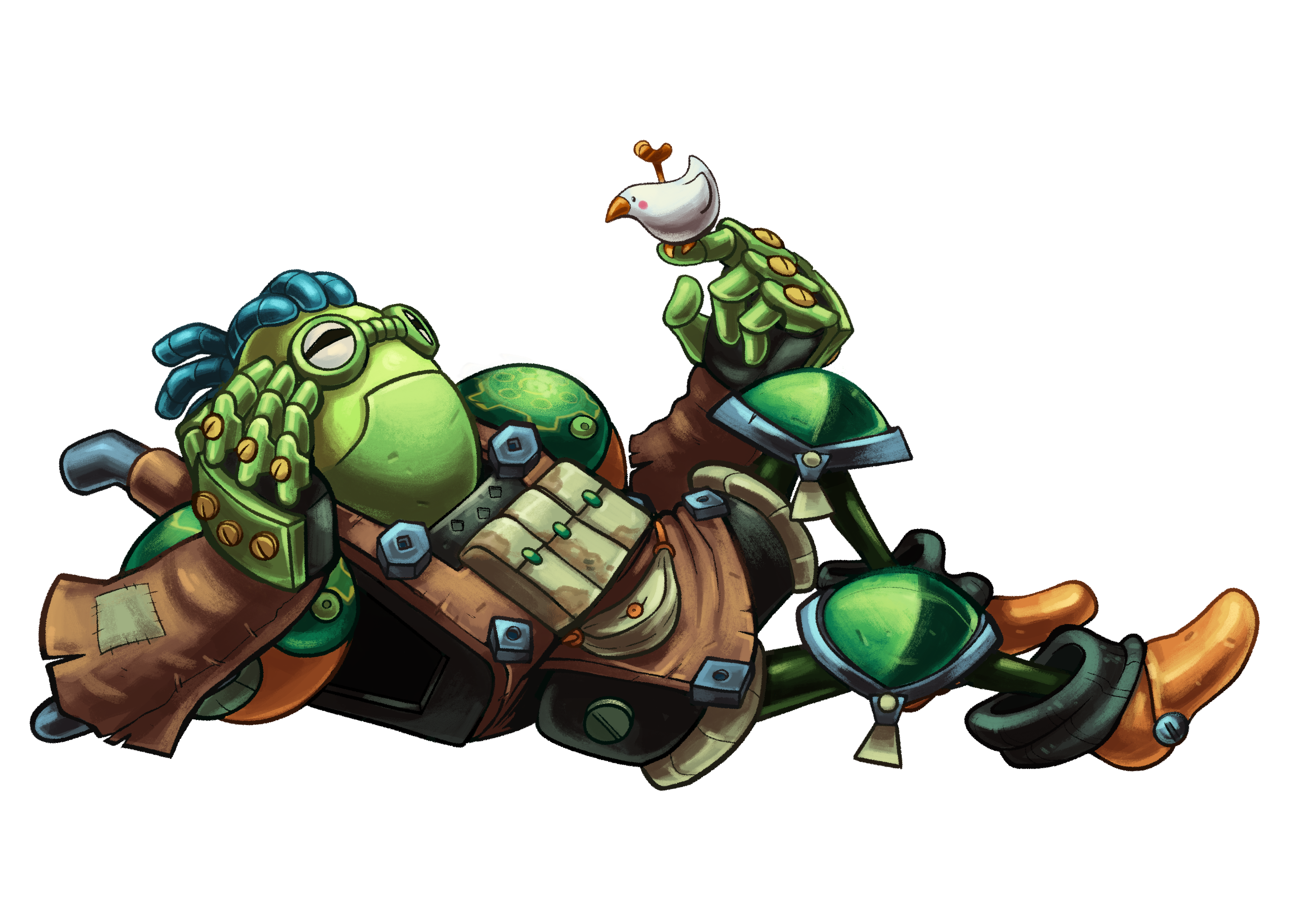 'Builds up a hand of steam like no other'

Combat can move too slowly, dungeons are a bit basic

12 hours total. Finished the game in 10 and spent some time grinding older missions and playing in the colosseum.

The hero abilities themselves are dependent on what weapon the hero has equipped. SteamWorld Quest has a travelling merchant you can buy upgraded gear from, restock on healing items, and even craft new cards at. Crafting cards is expensive, requiring gold as well as subsidiary materials like yarn and rare metals, all of which can be earned by defeating enemies.

There are just over 100 unique cards in SteamWorld Quest. At eight cards per hero and five different heroes to choose from when making your party, there are hundreds of thousands of different combinations you could potentially play with. Add to that a dozen accessory items that grant various bonus stats and abilities, and you have a fair number of tools to play with, even if the game’s enemy variety rarely requires you to fully explore all of them.

The game is divided into four acts, with each act subdivided into chapters. For the duration of each chapter you’re confined to a certain set of 2D spaces connected by fields, doorways, tunnels, or ladders. They span the usual high fantasy locales, including haunted woods, magical towers, and grimey sewers. In addition to being littered with wooden barrels, boxes, and other junk you can break to find extra gold, enemies can be seen strolling around itching for fights.

These dungeons are all very short, with only the occasional light puzzle, and exist primarily as vehicles for getting in fights. Still, the backgrounds are richly drawn and colourful, juxtaposing the medieval scenery with a whimsical crew of clanking, mechanical robots to create places I enjoyed returning to. Once a chapter is completed, you’re automatically taken to the next one, with the option of revisiting any of the prior ones to grind for more gold and experience points or hunt for treasure you missed the first time around.

The cards you collect in the earlier chapters usually synergize in some way to help with the final boss in that area. Later on the deck building strategies become open and diverse enough that there are lots of different and equally viable ways to play. It’s possible to recreate the tried and true strategies of other RPGs, like using one character to tank, another to deal damage, and a third to heal.

The roles of heroes you find later on are more ambiguous though. Orik, a mechanical samurai, has access to cards that can deal tons of physical damage or be used to buff and heal the rest of your party. Other characters complement one another on an elemental level. One of Galleo’s hero abilities hoses enemies with water, which can be followed up on a subsequent turn by Copernica’s electrical hero ability to deal even more bonus damage.

Developing these combos during a fight requires having the right cards at the right time, meaning it’s never enough to simply spec out your party and then watch them wreak havoc. It requires patience, foresight, and a little bit of luck. Sometimes the cards simply won’t come up the way you need. Countless times my party’s been on the brink of death, desperate for some heals, only for my hand to be full of attacks.

Far from being a nuisance, it’s in these moments that SteamWorld Quest excels, forcing you to make the best of a bad situation and see what last ditch tactics you can pull out to survive. If you do fail, dying sends you back to a previous save, and you never lose characters or cards. You can also respec and try again, making experimentation tempting and loss temporary.

The only thing I really wanted from SteamWorld Quest but didn’t quite get was simply more: more chapters, more enemy types, more unique hero abilities. The game’s combat system works so well, replacing stilted regimen and predictable routine with player-led creativity and ingenuity, that it’s somewhat of a letdown that the game’s plot is so predictable and routine.

As much as I love the characters and their witty banter, both they and their card-based arsenals deserved some more robust villains and a bigger, bolder conflict in which to face them. A coliseum you find towards the end of the game offers some extra tough fights and rewards to go along with them, but it feels more like a diversion than a full-blown side activity.

SteamWorld Quest is an impressive follow-up to SteamWorld Heist and SteamWorld Dig 2, but the game’s card-based combat system provides so much depth that much of what surrounds it feels somewhat shallow by comparison.I can’t help but wish the combat was in service of a grander storyline or more challenging, free-form exploration.

In the hundreds of battles I’ve had in SteamWorld Quest, no turn in any of them was ever the same. Even now there are strategies and builds I still want to go back and try, despite having already exhausted most of the dungeons. I only wish there were hundreds of new battles I had yet to fight.