The Original EverQuest Has Not Aged Well

daybreak studioseverquestgoing backmmorpg
To sign up for our daily newsletter covering the latest news, features and reviews, head HERE. For a running feed of all our stories, follow us on Twitter HERE. Or you can bookmark the Kotaku Australia homepage to visit whenever you need a news fix.

Ten years ago I wrote a story about EverQuest, the online role-playing game I was so obsessed with it cost me my job and a relationship. Now I’m revisiting the game, playing on the new progression server opened to celebrate its 20th anniversary, and I can safely say I am in no danger of falling under its spell again. Old school EverQuest is rough.

Launched last month as part s anniversary celebration, the Mangler server gives players a chance to re-live the game from the beginning. It’s the 1999 experience with a few modern improvements, developer Daybreak’s version of the much-demanded World of Warcraft Classic. The user interface is updated.

There are no experience or death penalties. Expansion packs are added at a rate of one every 12 weeks. Otherwise, it’s a similar experience to the one I played and enjoyed back when the game launched. I was so stupid back then.

Players choose between the original 12 races, with the four races added in later expansions greyed out. There are 14 classes available, with placeholders for future classes Beastlord and Berserker. When the Shadows of Luclin expansion launched in 2001, new, more detailed character models were introduced to the game. Those models are not present. That’s fine. I prefer the original. 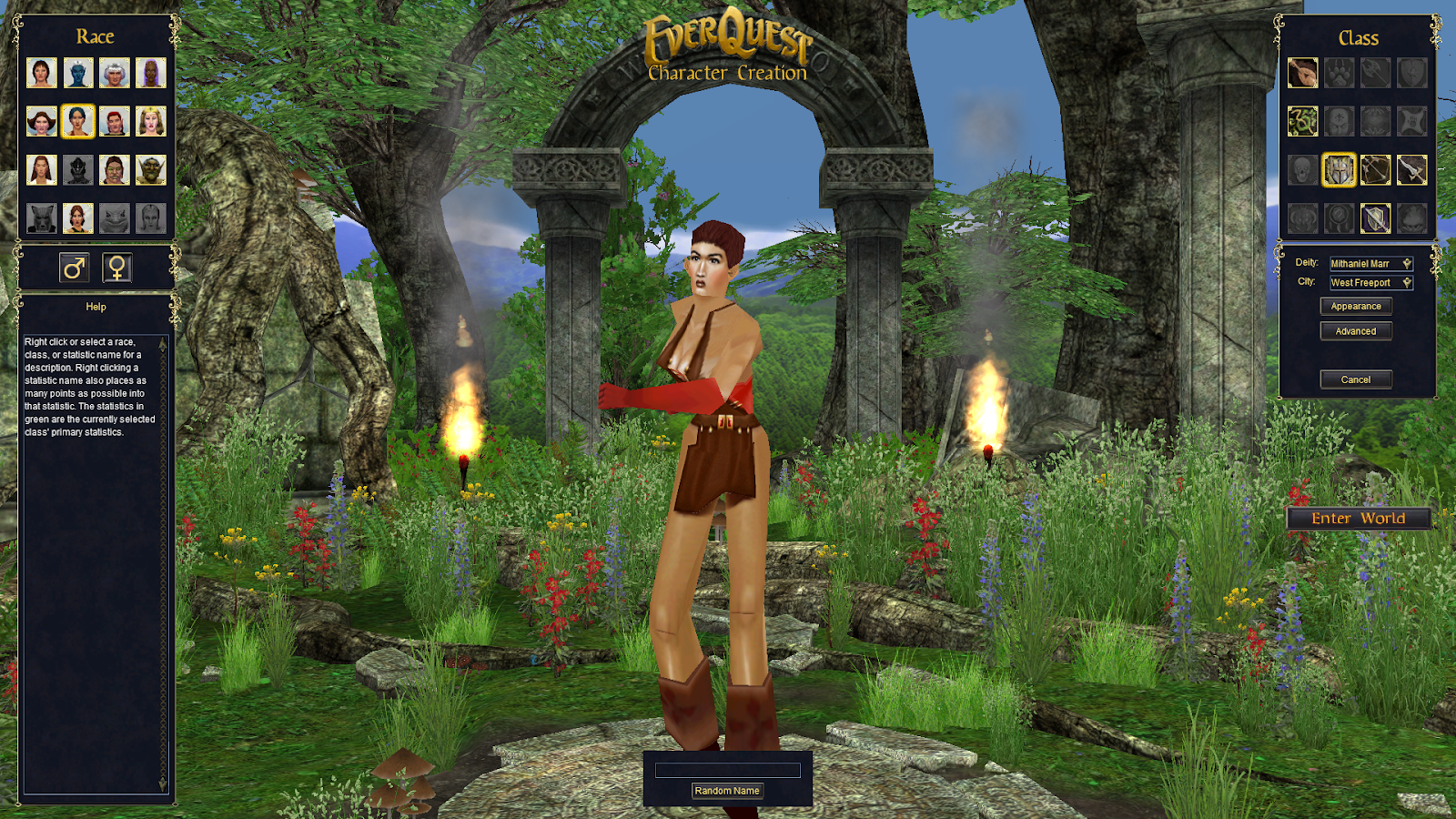 For my race I picked half-elf, because I’ve always had a soft spot for the shunned mongrels of elven society. For class, I went with Bard. To this day, I’ve never encountered a character class in an online role-playing game as satisfying to play as EQ’s Bard.

They are the ultimate support class, granting party members health, mana, haste and a host of other beneficial effects. At the same time, their ability to run super-fast while slowly killing hordes of pursuing monsters with damaging songs makes them excellent for solo players.

Eventually, at least. Bards have to spend a lot of time paying their dues before coming into their own, hacking away at low-level creatures with a one-handed weapon. They get a damaging song early on, but it has a wide area of effect, so singing it has the potential to make a lot of otherwise peaceful creatures quite angry. 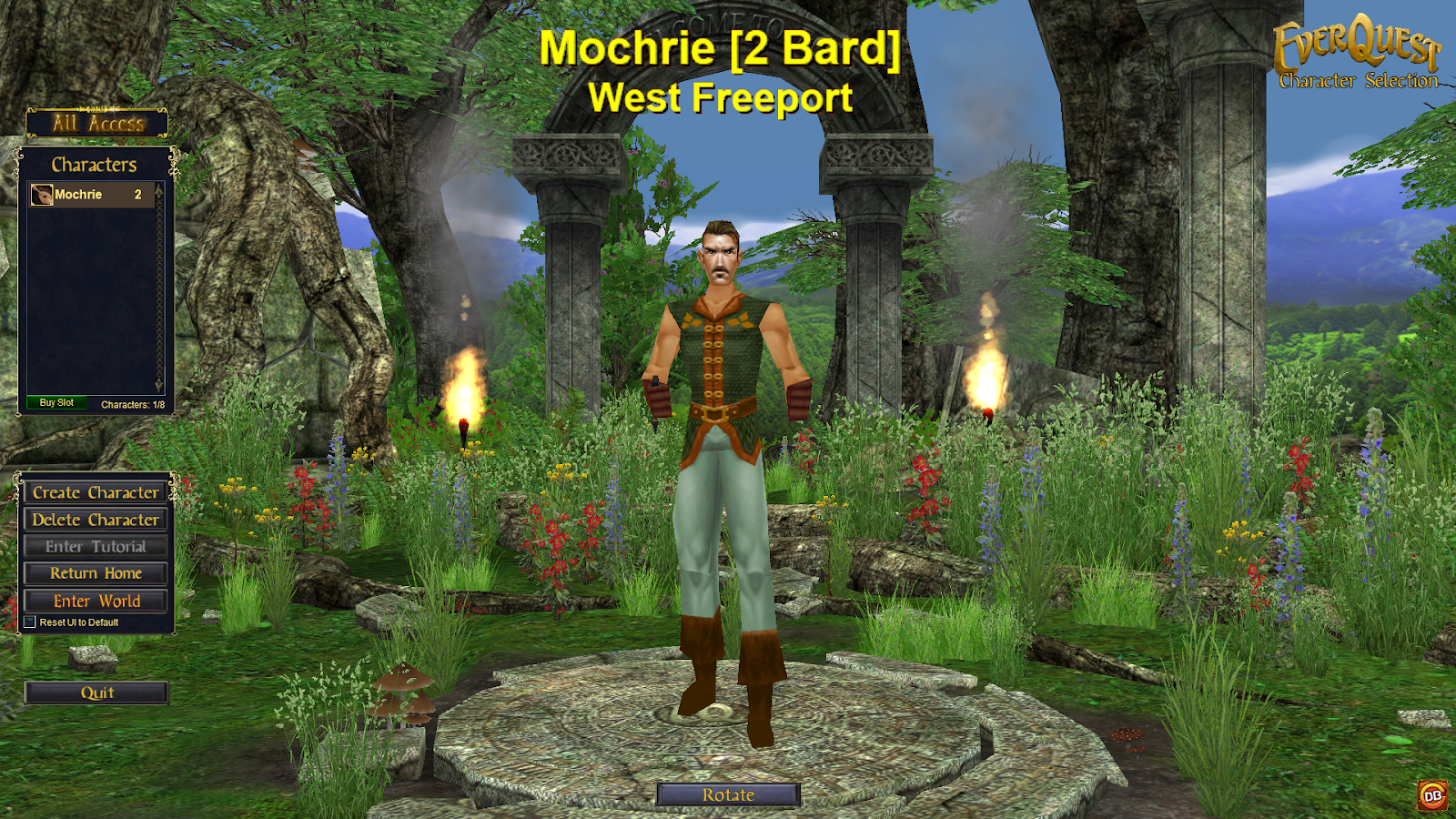 I spawned in the human city of Freeport, dreams of speeding across Norrath to the tune of Selo’s Accelerando. But before I could play the famous run fast music, I had to reach level five. It’s harder than it sounds. 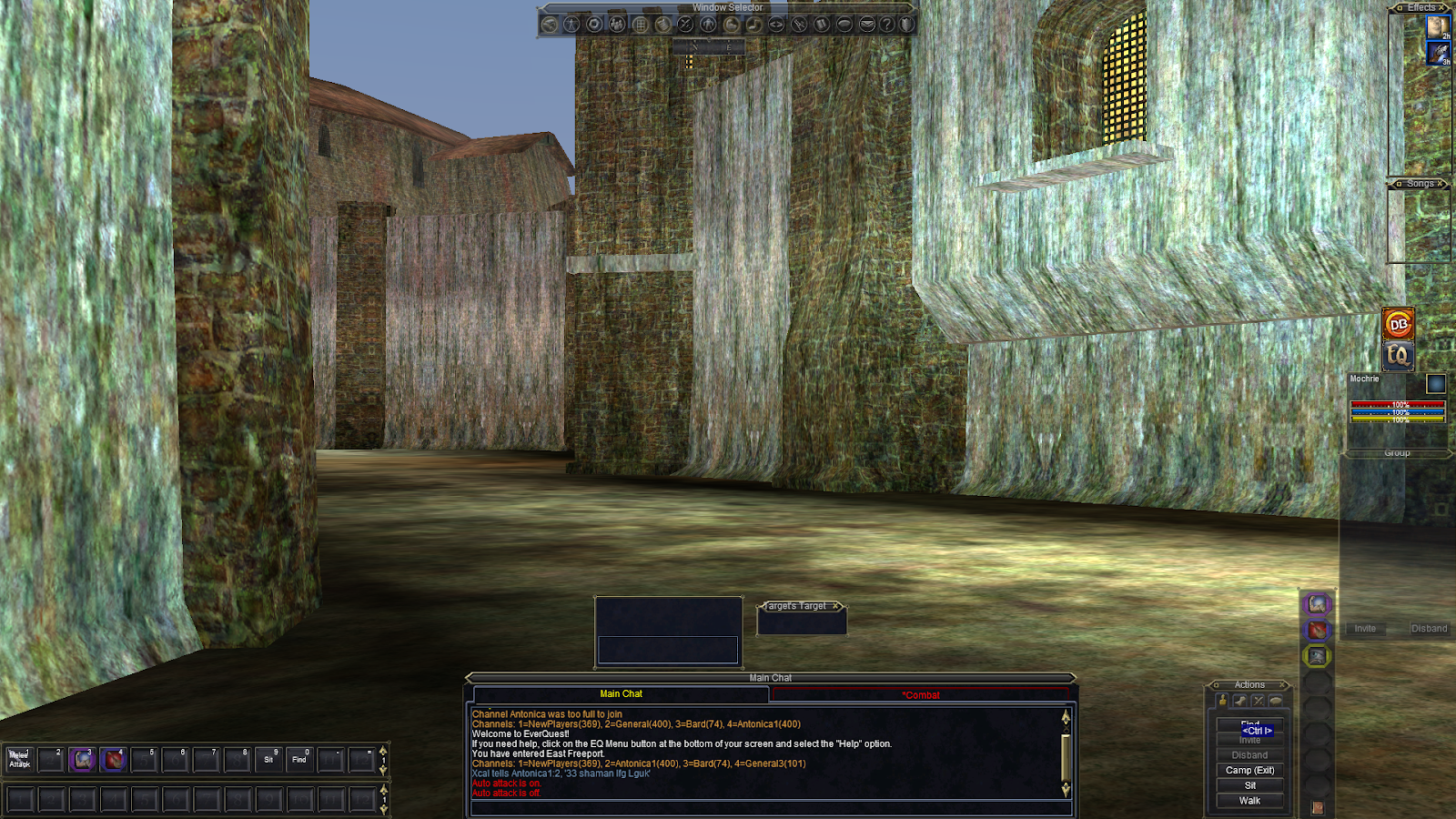 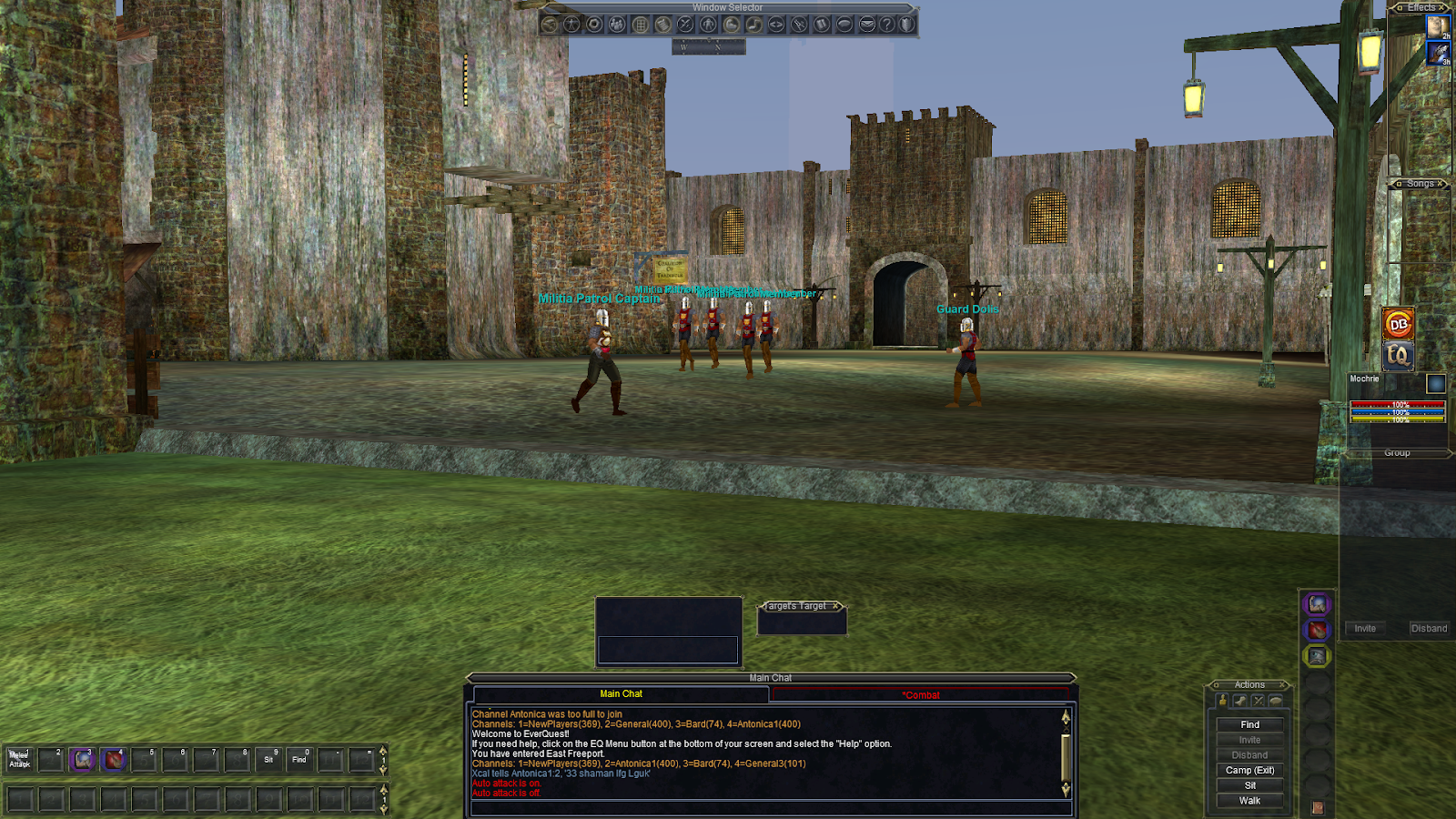 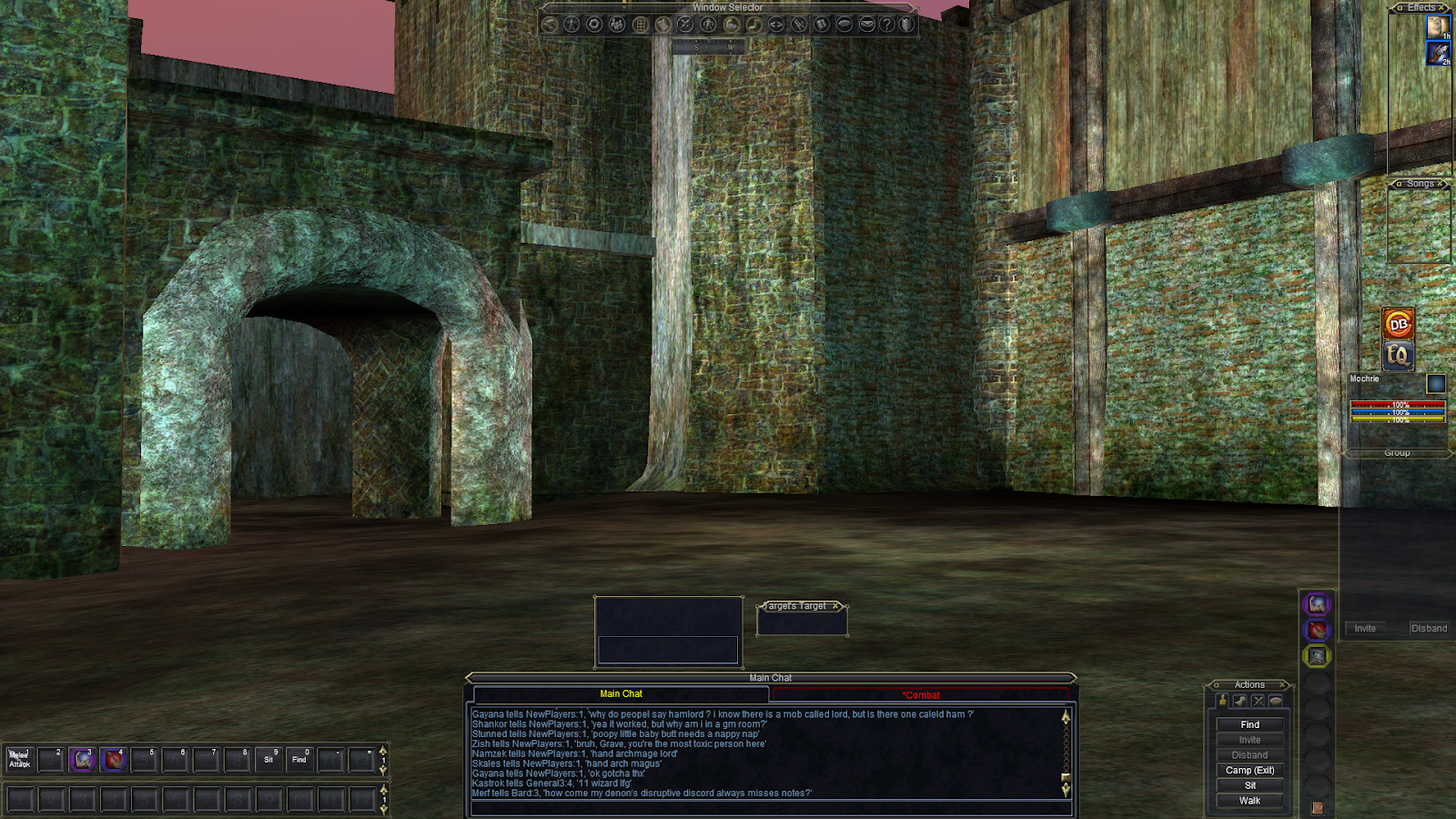 There are signs all over East Freeport pointing to West Freeport, all of which feel like they are pointing in different directions. I spent more time my first day back in Norrath running around the town, desperately trying to find my way out.

I did manage to use the find function on the game’s mini-map to locate the Bard guild, turning in my letter of intent, officially becoming a member. I picked up a few bard songs to scribe into my spellbook when I reached the appropriate level. Then I set off for adventure! Well, I looked for adventure. Again, Freeport is confusing. The map doesn’t help much. 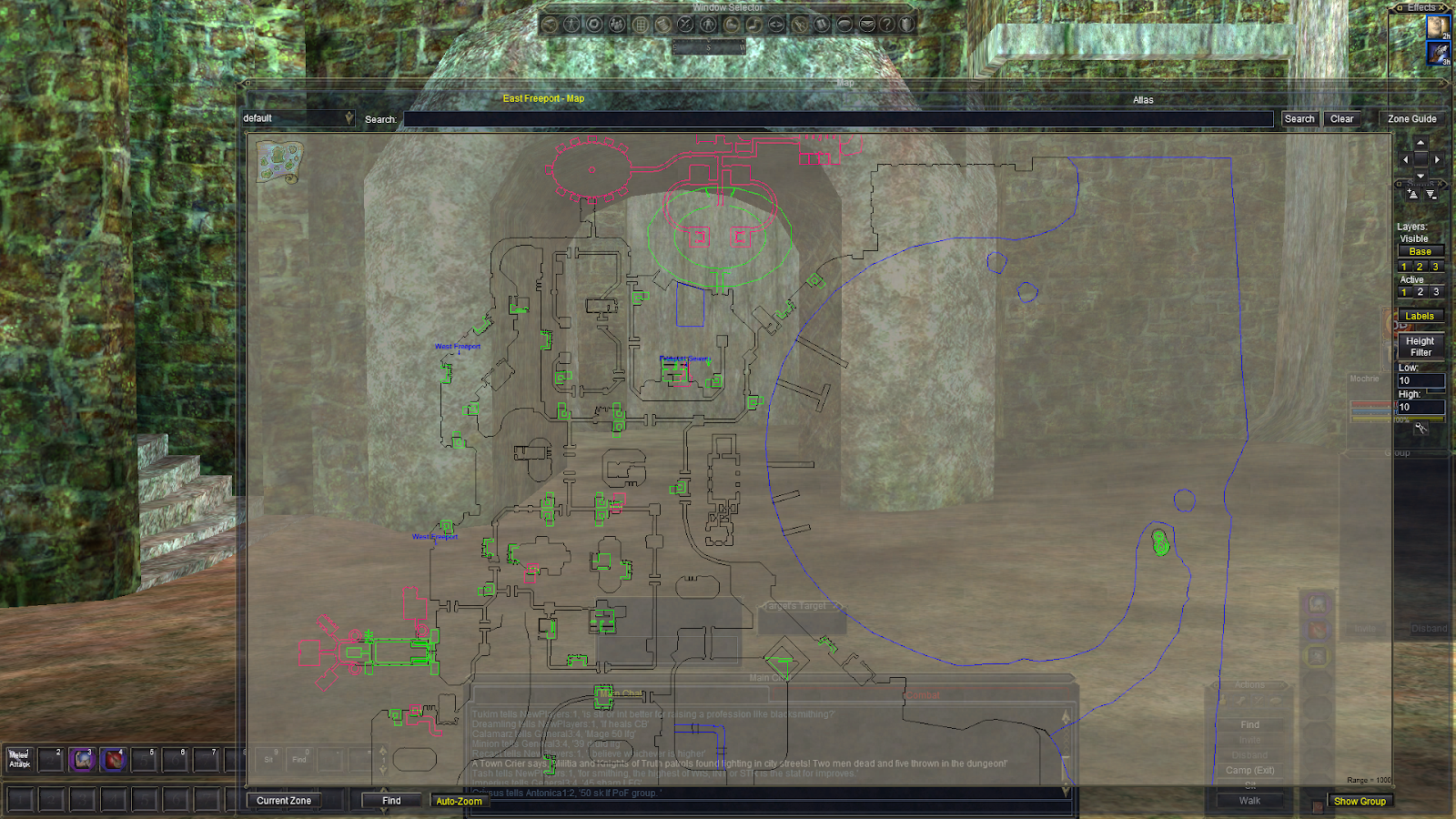 Eventually, I made my way to the killing grounds outside of West Freeport’s gates. The portion of the zone between the city and the adjacent East Commonlands zone is packed with creatures for newbies to kill. The famous giant rat, skeletons, low level orcs, snakes, beetles, and the occasional wolf roam wild, waiting for young players to come and bat at them. And bat at them. And bat some more. Did I mention batting? 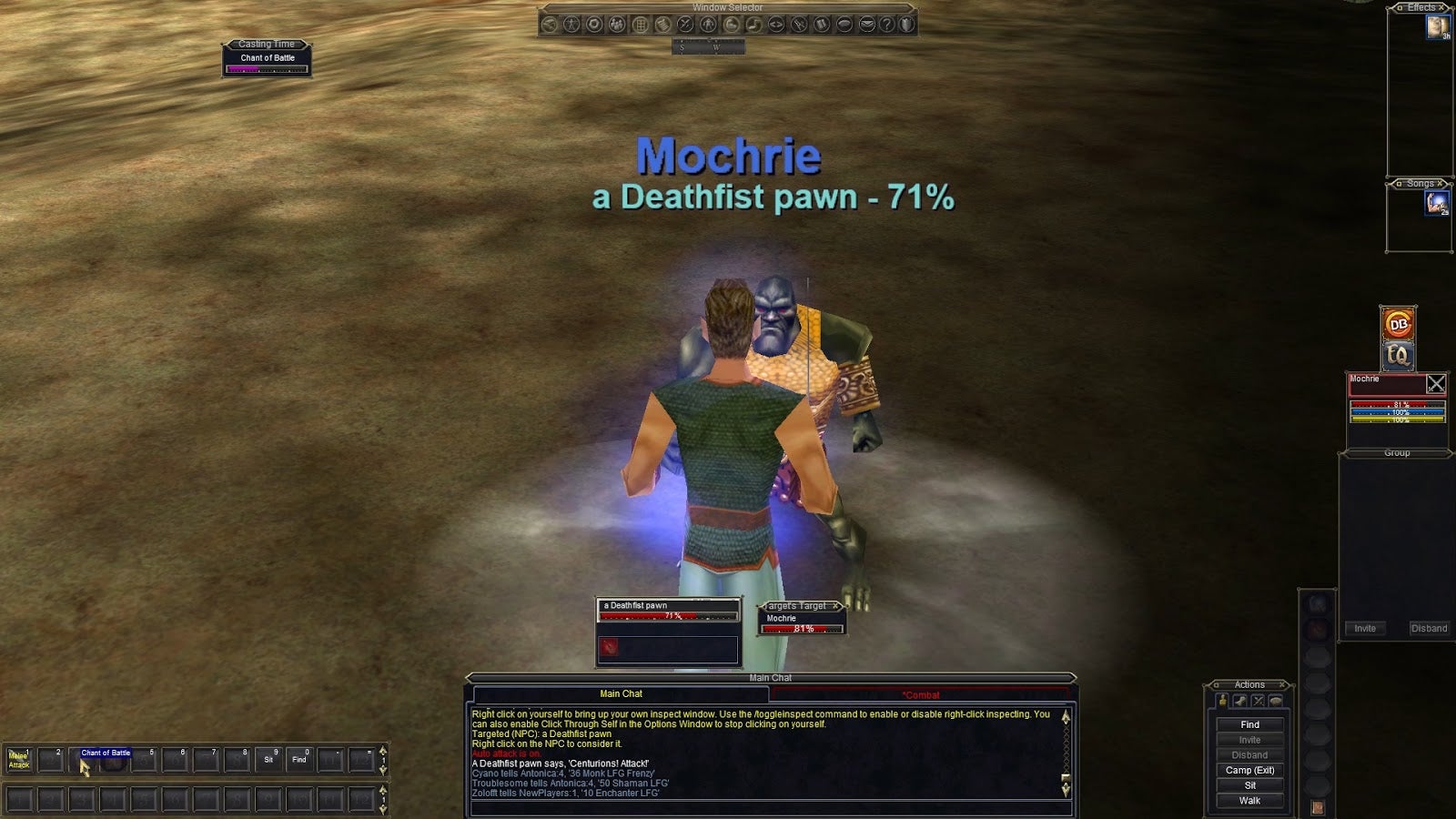 Creatures in early EverQuest take much longer to die than the ones in most modern online role-playing games. They also give a lot less experience. At level one in, say, World of Warcraft, killing between eight and ten creatures is guaranteed to advance a player to level two. It’s quick and it’s easy.

In old school EverQuest, between 30 and 50 creatures have to die before you’ll ding to the next level. Or more, depending on what you’re fighting.

Fortunately, the combat is incredibly exciting. First, a player must hit auto-attack. Then, they stand near their chosen target until it eventually dies. Then they run to the next target. An hour later, they are level two.

My god. At one point in my life, that was exciting. I would sit in front of my monitor for hours on end, watching my character do the same thing over and over again. I would ignore phone calls for this. I would call in sick for this.

To be fair, back then I had a lot more online friends. I was part of a guild, and my guild members depended on me. I felt useful to them, and that feeling was intoxicating.

Now I am playing with strangers. Some of those strangers are not great. Last night I listened to a conversation in general chat about what will happen to America’s avocado supply when Trump’s wall is built. I’m in no rush to catch up with those people, level-wise.

I’m going to keep playing old school EverQuest for a bit longer. I am level four right now, after four or five hours of play, and I can taste Selo’s Accelerando. Bard speed is only 50 or 60 kills away, and then the world of Norrath will be my oyster. My dirty, primitive, frustrating oyster.