The Rugrats Are Getting Downright Fantastical In Their First Graphic Novel

The fellowship of the pacifier is going on a big journey — right into their first graphic novel from Boom Studios.

We are delighted to exclusively reveal a first look at Tommy and friends’ newest comic adventure: Rugrats: The Last Token.

Written by Adventure Time comic scribe Pranas T. Naujokaitis and illustrated by Steven Universe: Fusion Frenzy artist Maurizia Rubino, The Last Token sees the babies go on their most epic quest yet… to the local arcade.

Yes, Stu and Drew might just be taking Tommy, Chuckie, Phil, Lil, Angelica and Susie to Wizard Rat Pizza Parlor Fun Time, but when the arcade’s stock of game tokens runs down to just one last golden disc — one token to rule them all, if you will — all hell breaks loose, as no kid can decide which game to spend it on.

It’s up to Tommy and the gang to reforge themselves with the power of imagination and become a true fellowship of fantastical heroes — guardians of the One Token as they take it on an epic journey across the arcade to the fabled Volcano machine, which offers the chance to win more tokens than any baby could know what to do with. 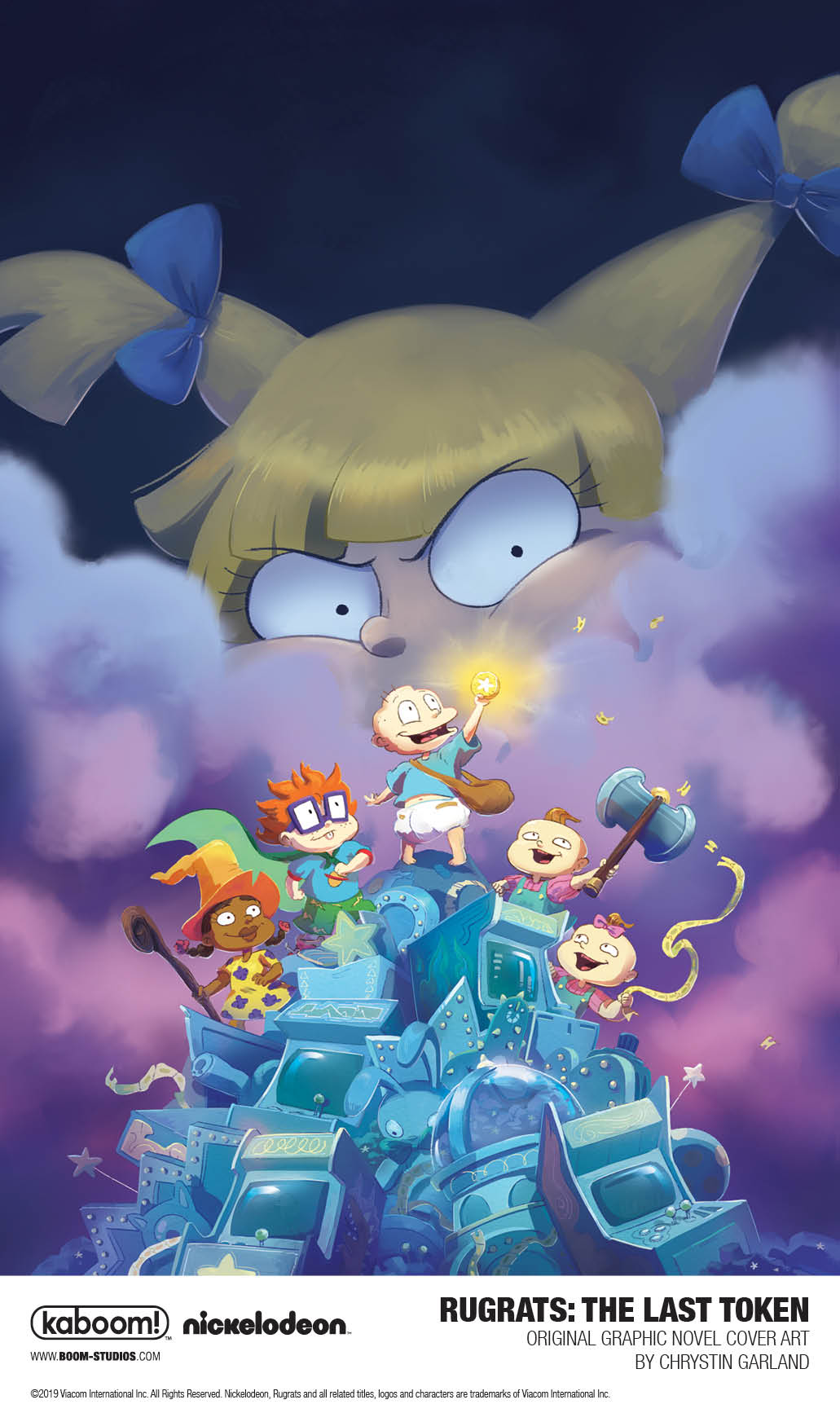 “One thing I always loved about Rugrats is how spot on they get it when showing how kids pretend when playing,” Naujokaitis said in a press release provided to us.

“I wanted to do a story that honoured those playtimes but through the eyes of Tommy and the gang. I am honoured to get to put my own small personal stamp and work with characters that I loved when I was young enough (and small enough) to still be allowed inside those plastic tubs of my youth.”

The fantastical element means that the whole gang is getting some pretty adorable fantasy outfits to go into The Last Token with, which you can see below.

“I’m very excited to work on The Last Token,” Rubino added in the same press release. “The story is super fun and full of references to classic fantasy stories, so it’s been a really interesting book to illustrate. I’m very happy to be the artist who has accompanied the babies on this amazing adventure!”

We also got the chance to grill Naujokaitis and Rubino, as well as editor Matthew Levine, about The Last Token over email — check out their answers below, as well as a sneak peak at Rubino’s designs for the babies. 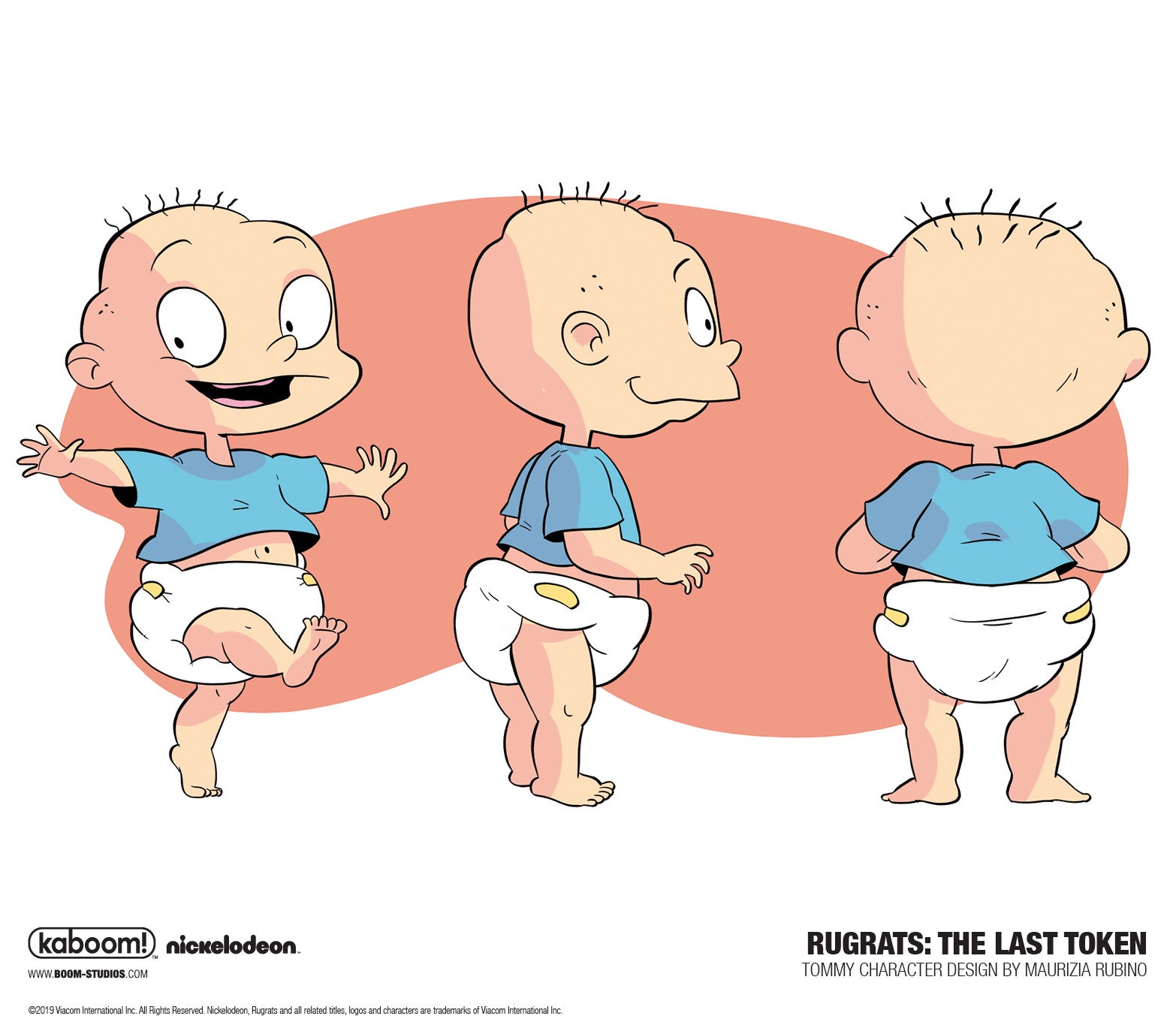 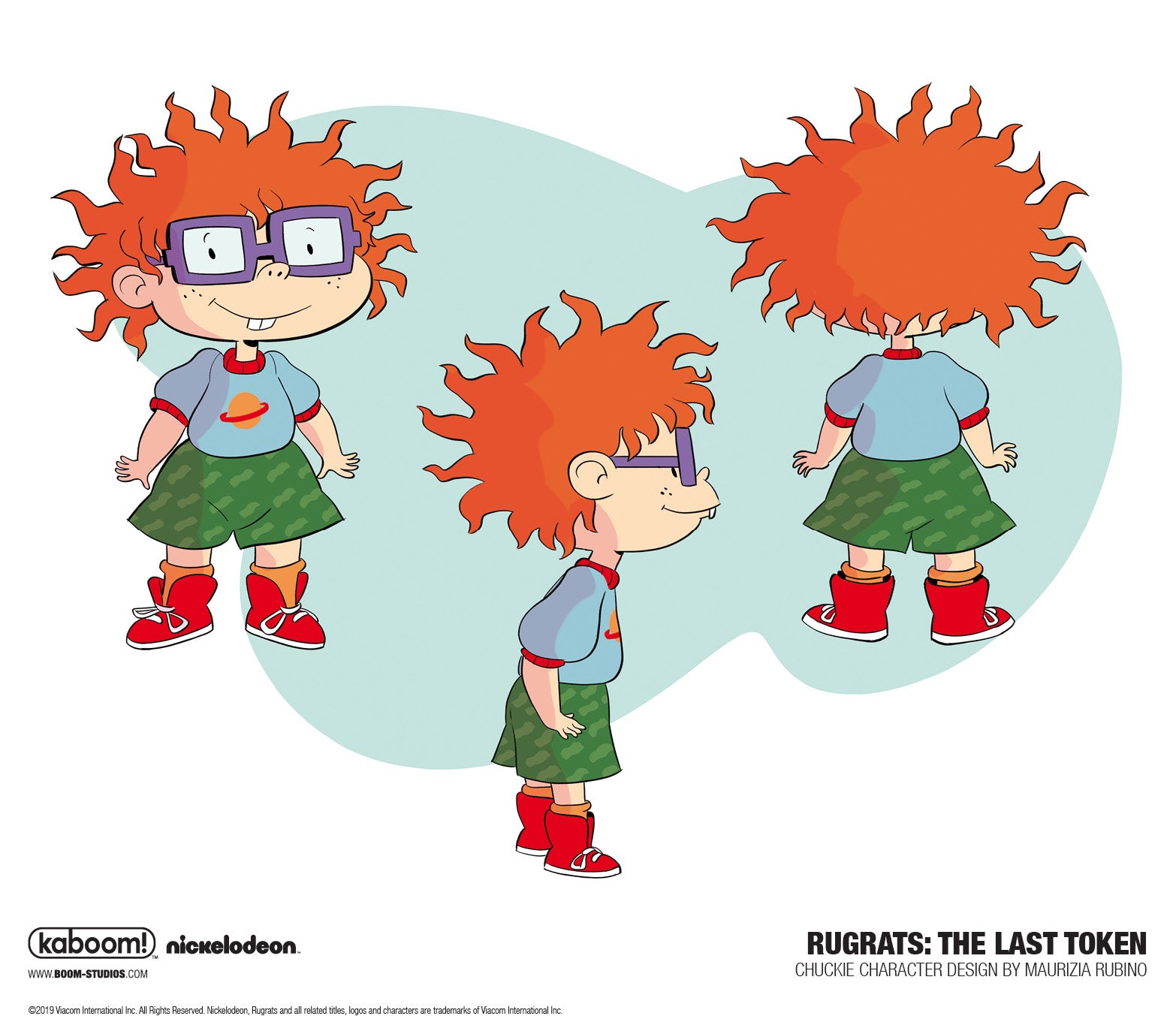 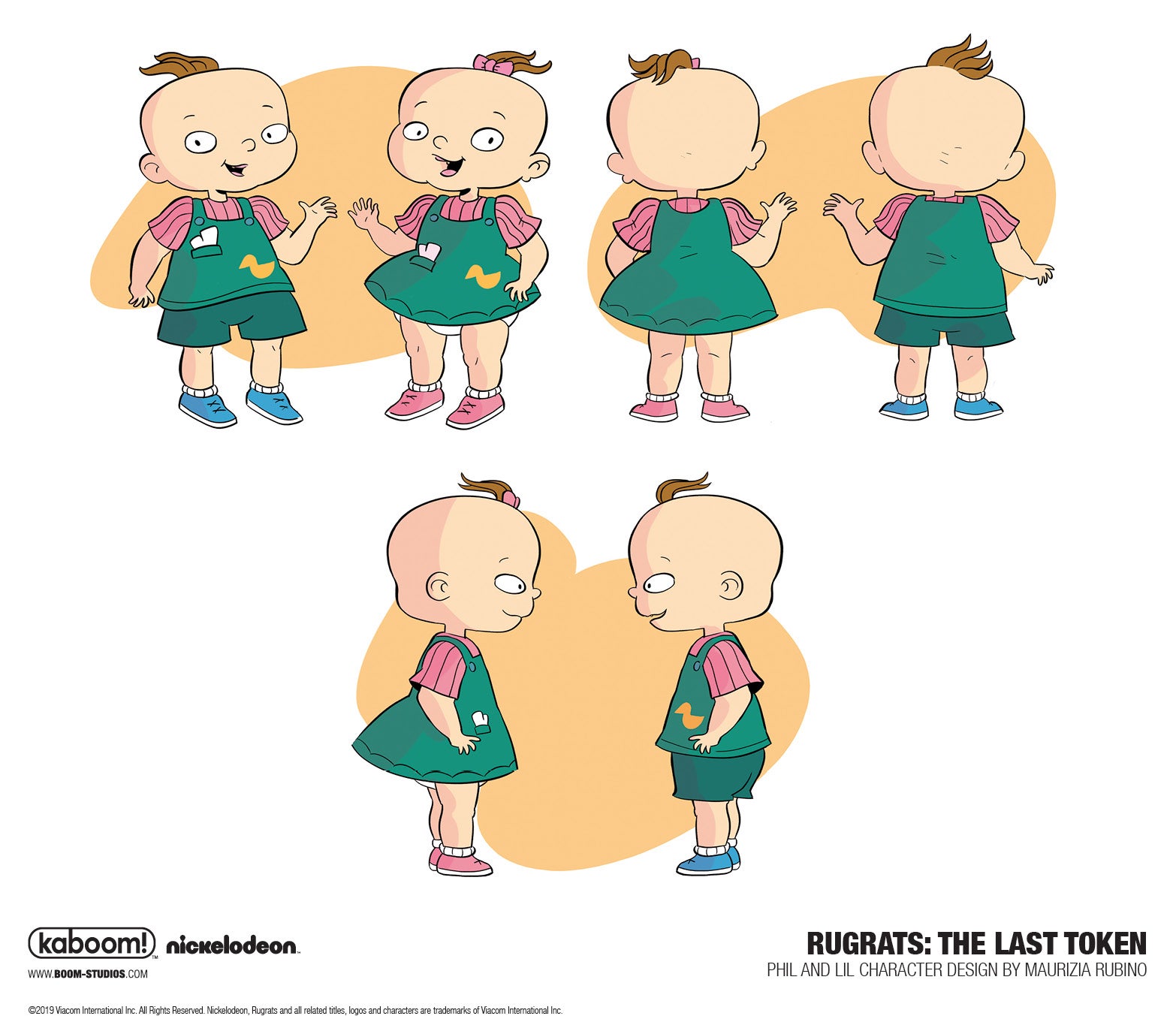 Tell us a little bit about your Rugrats history. What drew you to the series in the past — and what’s it been like getting to work on this graphic novel together with this cast of characters?

Matthew Levine: I grew up on the Rugrats and it wasn’t until editing the comics that I realised just how much they shaped who I am today.

I think what appealed to me most as a kid was that it was a show that revolved around family, which instantly made it relatable. The babies were always getting into trouble, but it was always together. That’s the best part about working on the graphic novel too, you have this large, hilarious cast to play with.

Maurizia Rubino: I always watched the Rugrats with great fascination because of the very unique design, which for me was really fun and interesting. I never imagined I would one day draw them, so I’m really excited to be living this fun and magical adventure with the babies!

Pranas T. Naujokaitis: I grew up during the first “Golden Age” of Nicktoons, so stuff like Rocko’s Modern Life, Ren & Stimpy, Doug, Aaahh!!! Real Monsters, and of course Rugrats.

But my family didn’t get cable until I was in my teens, so I had to rely on when I went to a friend’s house or when we were on vacation and staying in a hotel to get my fix. So the few times I got to watch these shows became precious, and I savoured them when I got the rare chance.

And those shows, along with a lot of cartoons from that era, really helped build the base sensibility of what I do today when I’m writing or drawing. They were huge early influences on me.

I think it’s wild that I get to put my own personal thumbprint on it and be a part of the history in a small way of this show I loved when I was a kid. If li’l seven-year old me knew what adult me gets to do for a living, I think he’d freak out a little bit.

Imaginative play has always been a cornerstone for Rugrats storytelling. What drew you to fantasy as the inspiration for The Last Token?

Naujokaitis: So when Matthew first approached me to write this, part of what they were looking for was to put these characters into one of their imaginative play fantasies for a whole book, like so many episodes of the show. So I threw out a few ideas, different settings, different genres the babies could find themselves in.

I believe as a storyteller, even when working on licensed stuff and playing in someone else’s sandbox, you have to put a piece of yourself into it. So all the settings and genres I was throwing out were things from my own childhood, places I played in, genres I love, etc.

I think the fantasy of their imaginations and the fantasy genre really melded well together. Then I thought about the babies going on a quest in that high fantasy realm and it just seemed like the perfect fit.

Choosing fantasy as the genre also helped inform the real world setting this takes place in. I wanted a reason for the babies to imagine a fantasy world, so the pizza parlour/arcade/playplace restaurant is medieval fantasy themed.

From a design perspective, how did you decide which Rugrat would reflect which fantasy archetype the best? Who was the most fun to find a “class” for in the babies’ adventure?

Rubino: I think we get to see Angelica’s true identity in this story. She makes an excellent villain because she loves her costume and her power. And no doubt, Chuckie was really fun to illustrate as well. He’s pure of heart and curly-haired, just like some other small fantasy heroes.

Naujokaitis: As a writer it was mostly easy assigning each baby to a certain class, because the characters are already so well established.

Tommy, the brave leader, would of course be a knight-type, using his trusty screwdriver as a sword. Susie, the wise older kid, would be a wizard. Angelica an evil witch, obviously.

Phil and Lil would be the more gross, rough and tumble classes, but I wanted them to have a little conflict with what they each chose to be. So we’ve got Phil as a dwarf and Lil as an ogre, and they rib each other a little bit over that.

Chuckie was probably the hardest but most fun to assign a class for. I played around with a few ideas, thought about maybe even going against type, but when I thought of him in the context of some other tiny reluctant heroes — picturing the hair on his feet matching the hair on his head — I had to go with that.

From the sketches I’ve seen so far, Maurizia really knocked it out of the park. One thing I love about writing is when you get paired up with an amazing artist who can take your ideas and make them a thousand times better.

Tommy and his friends all love Reptar, he’s such an iconic part of the Rugrats world. Any chance we can expect a bit of Dungeons & Dragons (& Dinosaurs) action in this new book?

Naujokaitis: I really wanted to focus on new monsters and challenges for the babies to face. This is their first time ever being in a themed restaurant like this, so I wanted to make everything they face feels new, more dangerous, [and] makes them feels really out of place and unsure about everything.

Rugrats: The Last Token is expected to release digitally and physically in November 2019.