Over the weekend, Karina “Karupups” Martsinkevich was streaming herself preparing her Lifeline cosplay in Twitch’s “Just Chatting” section to roughly 160 viewers. Martsinkevich, who had dyed her hair and put on a white shirt and surgical mask, then applied a dark foundation to her face to mimic Lifeline’s appearance.

“On my stream, I wanted to show the viewers, how hard is to prepare for a cosplay, how much time the make up, costume and another details can take,” Martsinkevich said in an email to Kotaku. 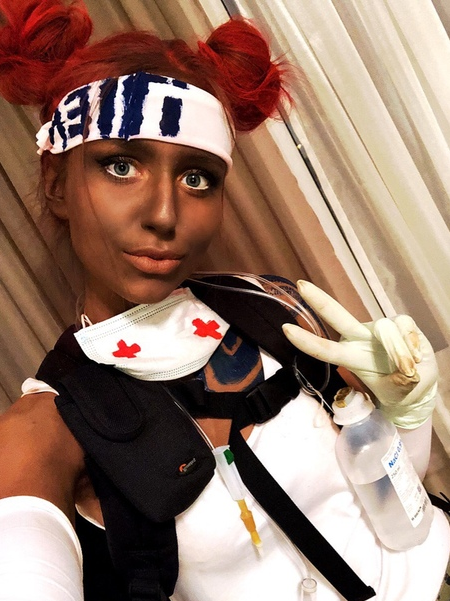 The final result of Martsinkevich’s cosplay is what’s commonly recognised as blackface—when a non-black person attempts to caricature or present as a black person. It originated in the 1800s when white actors used shoe polish or burnt cork, sometimes on top of highlighting their lips or other features, to perform exaggerated and racist stereotypes of black people.

Martsinkevich’s stream was taken down before she could finish her cosplay preparation in what constitutes a direct denouncement of blackface on Twitch.

After announcing her apparently 30-day suspension, Martsinkevich posted a YouTube video in which she explained that she was banned for “engaging in hateful conduct against a person or group of people.” She went on to contend that she “just wanted to be similar to Lifeline from Apex … it wasn’t meant to have [sic] a joke of anyone. It was just a cosplay, guys, for my favourite legend from a computer game.”

The Twitch streamer says that she didn’t mean for her cosplay “to be painful for anyone” and apologised to those who were hurt.

Twitch did not respond to a request for comment.

In the cosplay community, blackface is extremely controversial and widely looked down on. White cosplayers of brown or black characters like Overwatch’s Sombra and Michonne from The Walking Dead have been lambasted for the practice.

While aesthetic fidelity can be a primary concern for cosplayers, altering racial appearance easily devolves into stereotyping and recalls the history of the practice. On top of that, black cosplayers have faced numerous barriers getting into the cosplay scene because, traditionally, there are comparatively few characters in video games, comics and anime who appear black or dark-skinned.

According to several black cosplayers interviewed by Kotaku in 2016, they sometimes receive pushback and criticism for dressing up as characters who are not black.

After her ban, Martsinkevich again posted the picture of herself in the cosplay on the Russian social media app VK. She added the caption, “Thank you for the enormous support. Thank you for not leaving me alone in such a situation. So, guys and girls, what do you think about Cosplay?”