30 Minutes With Super Mario Maker 2 Is Not Nearly Enough 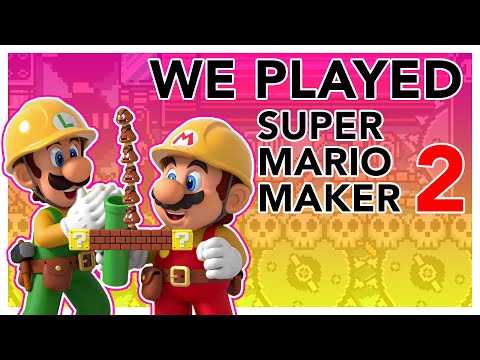 
Our preview session flowed like a regurgitation of the recent Nintendo Direct, which was dedicated to the game. Normally the word “regurgitation” makes me feel gross, though in this case, I’m role-playing as a baby bird. Feed me that liquified Mario Maker 2!

We got to play the story mode. It’s cute. Princess Peach’s castle has disappeared. You need to do jobs to earn coins to rebuild it. The jobs are Mario Maker levels hand-crafted by Nintendo’s master level designers. The three that I was able to play felt to me like Nintendo had played a lot of Super Mario Maker community levels and then lovingly Nintendofied them until the levels resembled something like the textbook for the best possible college game design course ever.

I got to mess with Course Builder mode. The new controls tripped me up for almost the entire duration of my demo session. The Wii U Gamepad has spoiled me. The PR person on hand helpfully informed me that I could remove the Switch from the dock and try touchscreen controls—however, I was capturing footage. You can’t capture in portable mode. So I struggled with the brand-new controller-only control interface for ten minutes. Learning to control that beautifully complicated interface in a demo session atmosphere felt like learning to use Photoshop on an aeroplane.

Then, suddenly, it clicked. I put an Angry Sun in my level. I turned the Angry Sun into a moon. I don’t know what the moon’s name is. Maybe it’s “Helpful Moon.” It does help you; if you touch it when it swoops at you, it destroys all enemies on screen.

I tested the new sky and forest level themes. I mostly just wanted to hear the brand-new chiptune music tracks by Super Mario series original composer Koji Kondo, though the demo room was too loud and the TV volume was too low for me to get my fill.

I started to build an auto-scrolling Super Mario Bros. 3 level. You can variate scroll direction and speed within a level in Super Mario Maker 2, which has my mind teeming with possibilities. I tried the feature out and was pleased with how intuitive it felt to implement, just like everything else in Mario Maker.

I then played a sampling of courses on Course World mode. You’ve got deep search tools this time around. I can’t wait to search for auto-scrolling Super Mario Bros. 3 levels. There aren’t quite enough levels to do that at the moment, seeing as the game isn’t out yet and all of the levels were made by the developers for the purpose of preview events like the one I went to.

Using the new “Clear Conditions” feature in Course Builder mode, level makers can require players to retrieve a specific quantity of coins or kill a quota of one particular monster type before clearing the stage. If you try to clear a stage before satisfying the clear condition, the flagpole will be an untouchable dotted line.

My very first multiplayer session required me and my three opponents to obtain all 100 coins in a level before racing to the goal. I helped out a little bit. Then I realised I could stand next to the exit pipe and jump in immediately after the other three players picked up the last coin. My plan worked beautifully. Victory tasted delicious.

While we continued to compete in various multiplayer stages, one of the PR people casually reminded us that the game would have online multiplayer. My brain began to swell with possibilities. I want to construct vicious coin-grabbing, enemy-stomping arenas. I already have a dozen stage ideas in mind. I want to turn Mario Bros. into esports for my best friends.

Super Mario Maker 2 releases on the Nintendo Switch on June 28. One hour after acquiring it, I promise I will perfectly come to grips with using the Pro Controller to build. Then I will probably make most of my Super Mario Maker 2 levels on the subway, in portable mode.

There’s even a playlist of all my other videos. Wow!