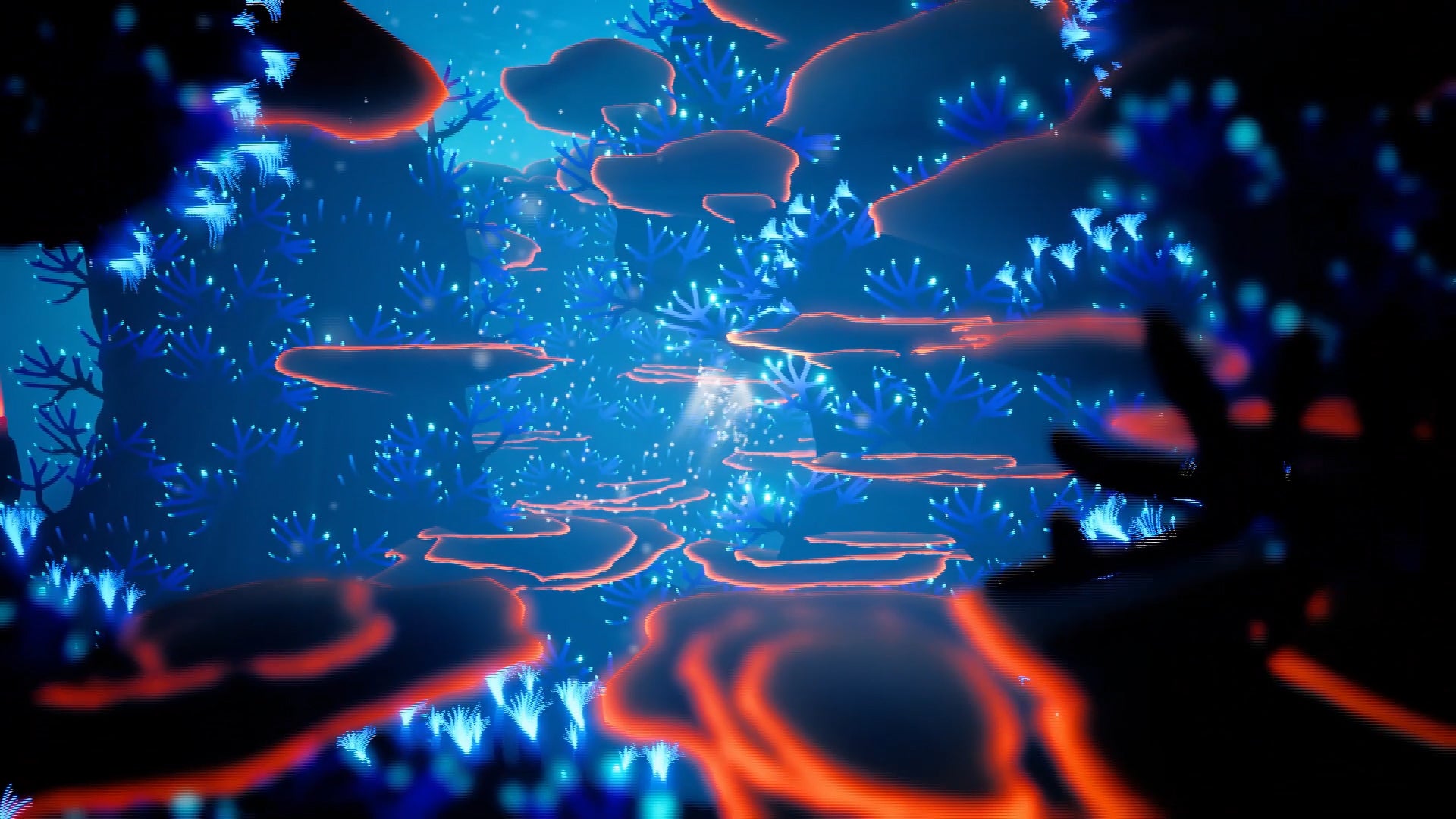 Koral is a 2D side-scrolling puzzle game where you control a water current that moves under the ocean, swimming amongst the diverse sea life and bestowing healing energy to coral reefs. It’s a simple game with a series of elegant puzzles that move at a slow, smooth pace.


Watch the video I put together to marvel at the game’s beauty or read the script down below:

The only method of input is an analogue stick, or the WASD keys on a keyboard. I played it using an Xbox One controller on PC.

I love the commitment to simplicity at play here. Puzzles usually amount to collecting glowing energy from plant life and carrying it to various reefs to restore life. Doing so lights up the world in ways that never failed to make my eyes widen and send chills down my spine.

The game takes cues from other indie titles such as Journey or Abzu, but the simple yet effective art style helps give it its own identity. Koral cleverly disguises levers and moving platforms as sea life or large chunks of rocks that open up new areas with new puzzles.

Each area is usually designated by larger one-way currents or walls of pollution that clear up to let you advance. Some areas even have Finding Nemo-style currents that shoot you through a tunnel.

The game gets a little trickier once it introduces timed collectables that must be gathered in order, similar to the red coins in a Mario game. Part of the process involves plotting the right course so it can be done in the limited amount of time you have. Some of these sections felt a little clunky, but I never got stuck.

Koral is definitely a game you can breeze through in one sitting. I spent a little over two hours from start to finish, but there were also one or two areas that had some optional collectables.

Collectables in the game are pretty fascinating. There isn’t much to them outside of a glowing orb of light. But once you pass through them, the game shows you a bit of information on screen that gives you some insight on sea life or the impact that humans have on these underwater ecosystems.

As someone who binged through Our Planet on Netflix recently and can’t help but be reminded every day of the impact that climate change is having on the world around us, seeing a virtual representation of it was moving.

The game’s store description says Koral is a love letter to the ocean, but it’s one that carries a sincere message to the player. Swimming through polluted water full of plastic or seeing the effects of dynamite fishing is heartbreaking.

The game’s designer, Carlos Coronado, put together a video about its development, which involved a boat trip involving Carlos and a handful of friends and collaborators as they sailed along the coast of Catalonia, Spain.

The game was actually developed on the boat, with Carlos and crew diving into the water to get reference shots of coral reefs, animals and even granular things such as a new eco-friendly buoy systems.

It’s refreshing to see a developer actually post a lot about their process and bare human concerns about their project. Especially when that process seemed like such a fun time and one that was full of a good amount of rest and relaxation.

Koral takes a super simple concept and paints a loving tribute to the biodiversity of the ocean. It reminds us why it’s so crucial for us to take notice and save what we can while there is still time.

Koral is available on Steam for Windows and Switch.