All The New Details About Microsoft’s Rebooted Edge Browser 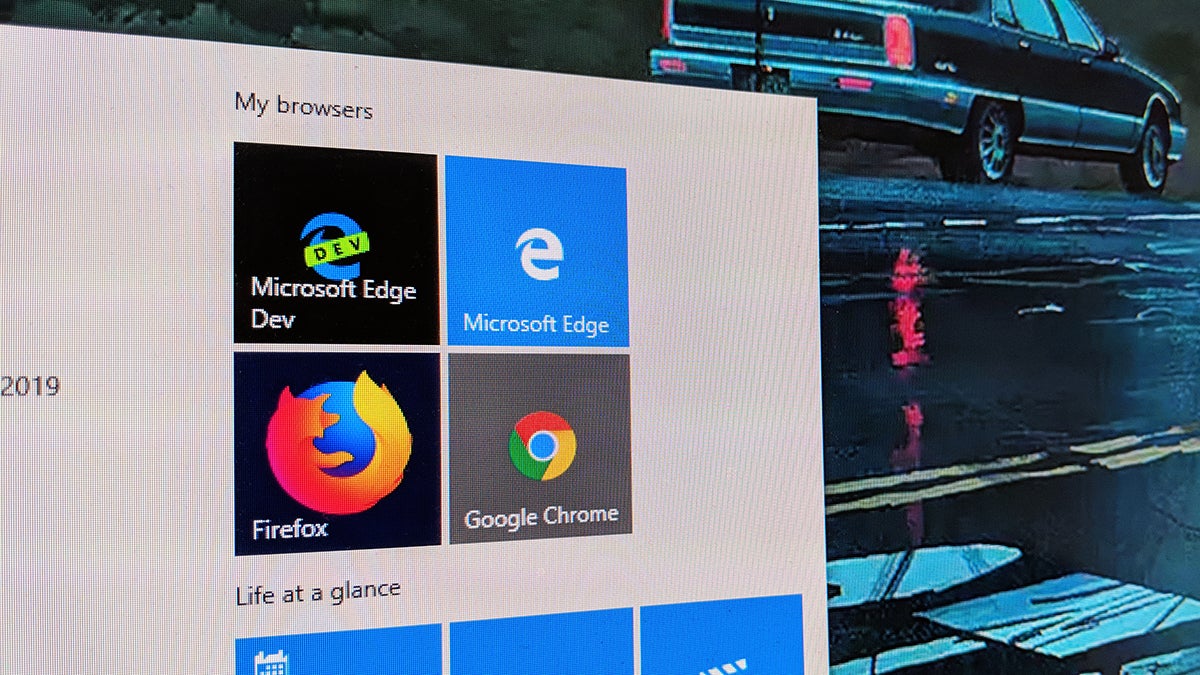 Microsoft is rebuilding its Edge browser using the same Chromium foundation blocks that sit underneath Chrome, and thanks to this week’s Build 2019 conference, we now know a lot more about what the revamped browser has to offer. Here are the details you need to know and why you might eventually end up switching to Edge.

For the uninitiated, the switch to Chromium and its Blink browser engine makes sense for the new Microsoft Edge for several reasons. As we’ve explained in more detail elsewhere, browser engines handle the nuts and bolts of converting website code into actual websites, and Chrome, Safari, and Firefox all use different engines. Ditching the EdgeHTML engine and switching to Blink means web developers don’t need to worry about getting sites working in Chrome and Edge, which in turn means Edge will just work. It also means the new Edge is compatible with more computers and devices—like those running macOS or older versions of Windows.

As a bonus, it gives Edge 2.0 (as Microsoft isn’t calling it) access to Chrome’s vast extension library. The most popular browser is usually where the innovation is happening and where the future of the web is shaped, and using Blink inside Edge gives Microsoft a seat at that table. Some of the features introduced in Edge might well end up making their way to Chrome, eventually.

So besides the underlying engine, what else is different about the new Microsoft Edge? And why would you pick it over Google Chrome? We’ve listed them below, and if you want to test out a developer version of the new browser for Windows 10, it can download it here.

What Edge leaves behind 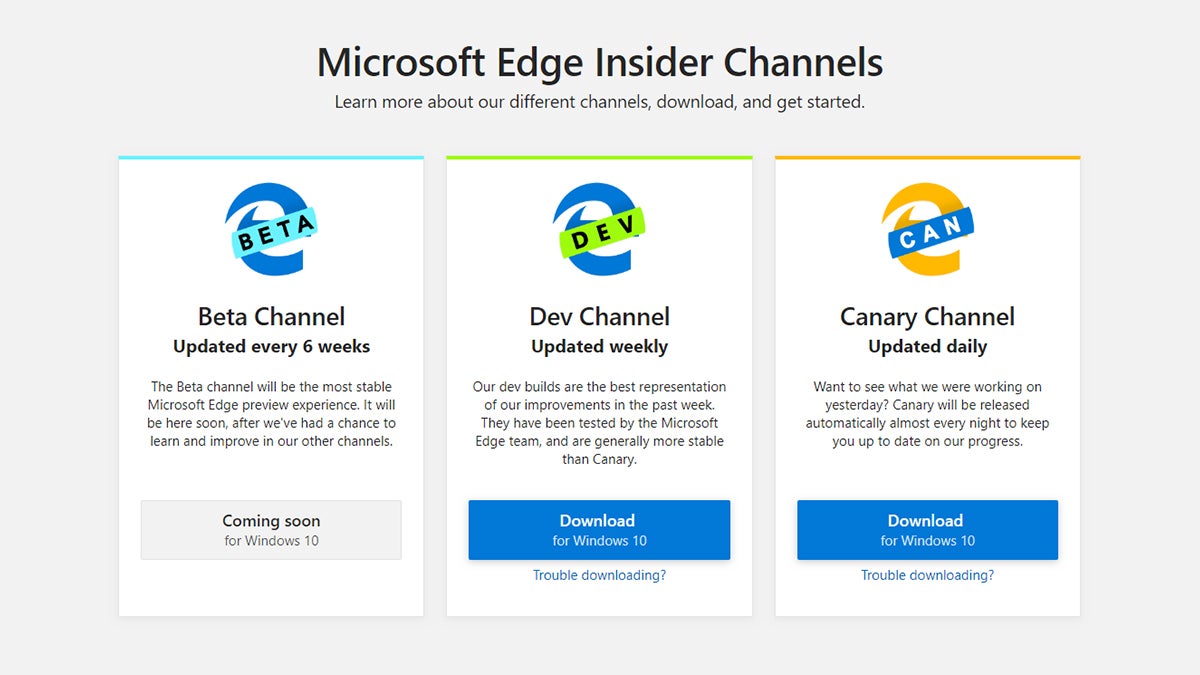 The open source web browser project Chromium is not the same as the Google Chrome software built on top of it—though Google engineers work on both. Developers building on Chromium, like Microsoft, have the freedom to adapt it to their own needs and keep out some of the extras Google puts in.

In the case of Edge, a ton of Chrome services have been left out or marked for replacement using Microsoft’s own code. Take a look down the list, and you’ll see this is Microsoft’s rodeo: Google Pay and Google Now are left out of course, and hooks into Chrome OS, Google Maps, Google’s DNS service, Android password sync, Google Cloud Print, and Google Drive are left behind.

Some of the features that have been cut out, like safe browsing, ad blocking, and translate features, we’d expect Microsoft to build back in using its own services. But you can see straight away how Edge makes you much less reliant on Google to surf the web. 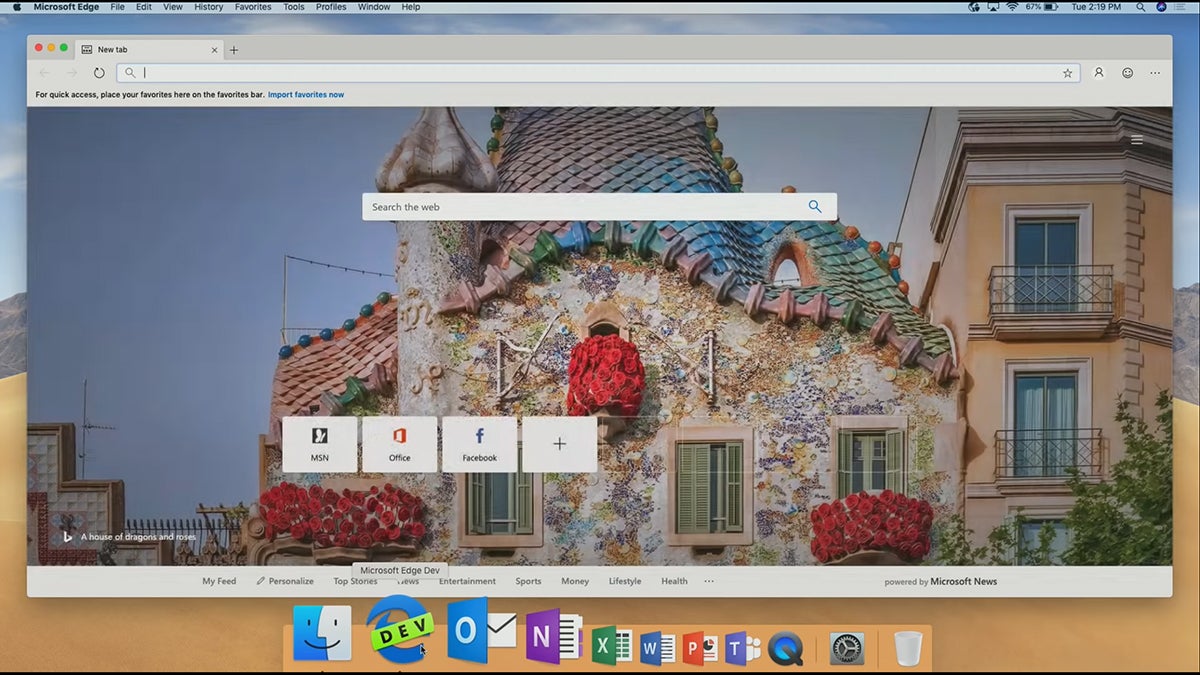 Remember what we said about improved compatibility, now that Edge is running on Chromium and Blink? That means Microsoft Edge is coming to macOS to give you another, Microsoft-flavored alternative to Safari for your browser of choice on Apple computers.

Officially, it’s still coming soon, though that may have changed by the time you read this. Unofficially, this Reddit thread points to an early Canary build of Microsoft Edge for macOS, which as far as we can tell is the genuine article. Until Microsoft confirms the browser is ready for testing, you run it at your own risk.

The differences between Edge on Windows and macOS should be minimal, and you can expect a mobile version for Android and iOS to appear in the not-too-distant future as well, ready to sync all your browsing data between the desktop and your phones and tablets (the old Edge is still available for mobile devices).

Internet Explorer is back 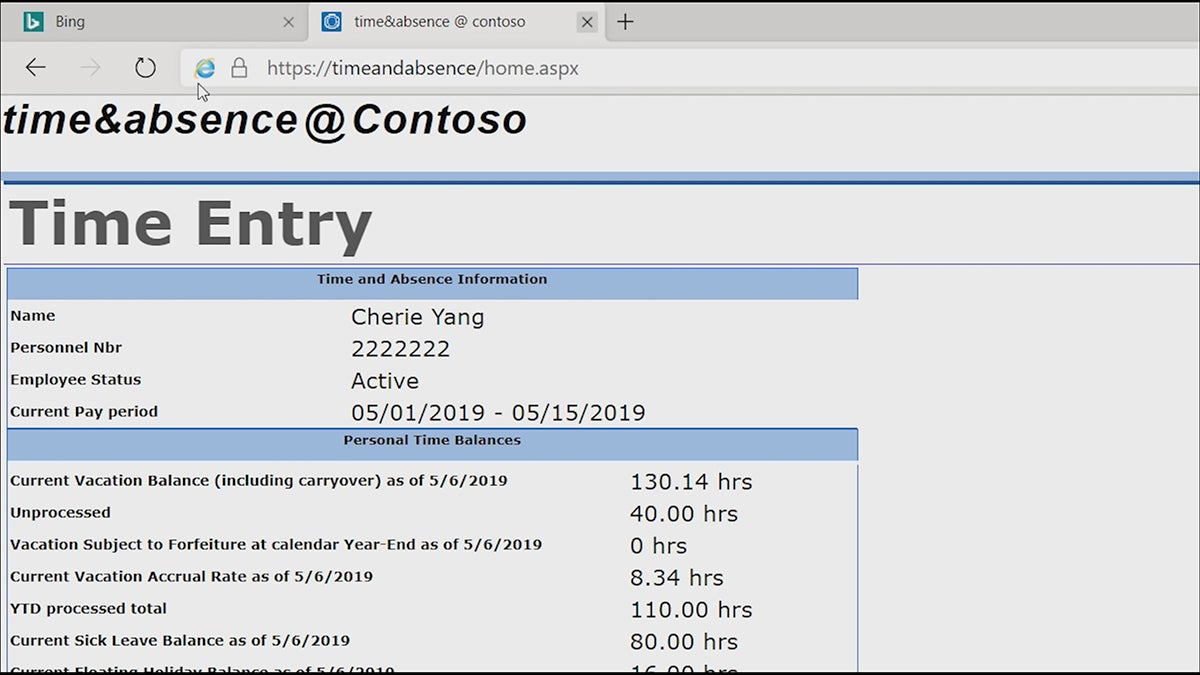 Here we are in 2019, and there are still some websites that only work properly in Internet Explorer, which has led to it hanging around in Windows 10 like a guest who has long overstayed their welcome. The new Edge lets you browse IE-only websites without having to launch IE itself.

It’s a neat trick. When you browse to an IE-only website, Internet Explorer effectively opens up inside an Edge browser tab. Edge will recognise pages that need to be rendered using the old Internet Explorer approach and do it automatically.

If it works as advertised, you should be able to carry on using IE on your company’s outdated intranet system without actually realising it. You can finally banish standalone Internet Explorer from your Start menu for good. 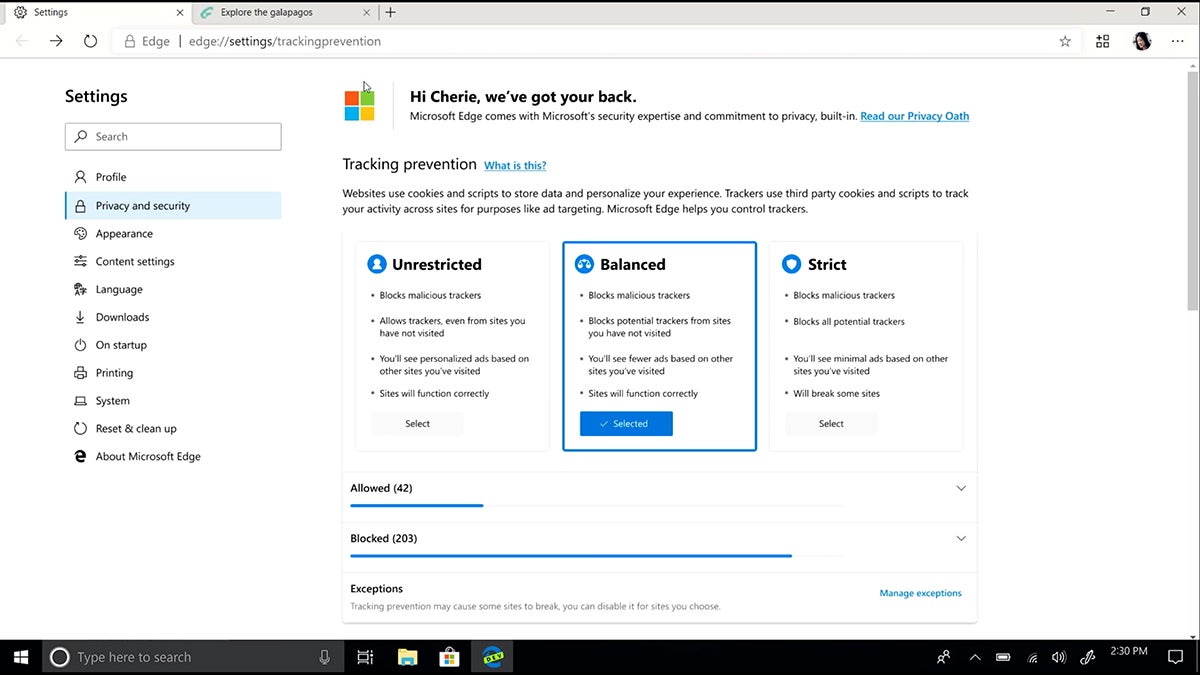 Companies like Google make their money by selling ads and collect slews of data about you in service of targeting the best possible ads to you. Its efforts to build up a profile about you are never-ending, even if Google says it uses this data responsibly, and even if it can do a lot of cool personalisation tricks with it. Microsoft, on the other hand, isn’t quite so invested in targeted advertising.

As a result, Edge isn’t quite so obsessed with tracking you and your online movements. “We’ve heard from our customers that it’s too hard to understand how sites across the web are using your data, and you don’t feel in control of your data when browsing,” opines Microsoft.

With that in mind, Microsoft is working on a “privacy dashboard” which brings all your privacy and ad-tracking settings into one place. The idea is you choose a preset, transparent level of permissions you’re comfortable with—Unrestricted, Balanced or Strict—without having to dive into each option and toggle switch individually. 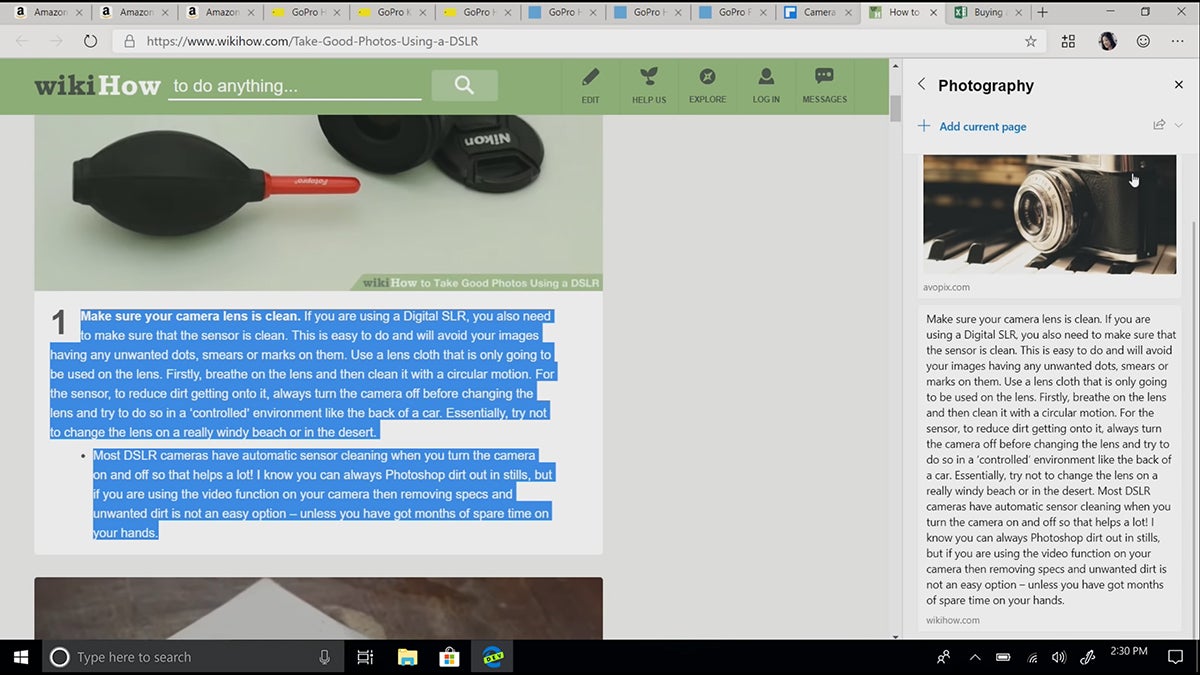 Keeping track of everything you’re looking at on the web isn’t always easy, which is why many of us end up with dozens of browser tabs sprayed across the desktop, each containing a site we don’t want to forget about.

Enter Collections, a new feature coming to Edge: Microsoft says you’re going to be able to “collect, organise, and share” content from the web more easily, with a little help from a sidebar and some drag-and-drop magic. It looks very much like one of those web clippings utilities we’ve seen in the past, and Microsoft says tight integration with Excel and Word will make it easier to get clipped material into other programs.

While a browser extension or some smart bookmark manipulation might do the job just as well, it’s another feature that we’re intrigued to test out once Microsoft adds it to the mix. Like the other upcoming features we’ve listed, there’s no official timeline for its launch.