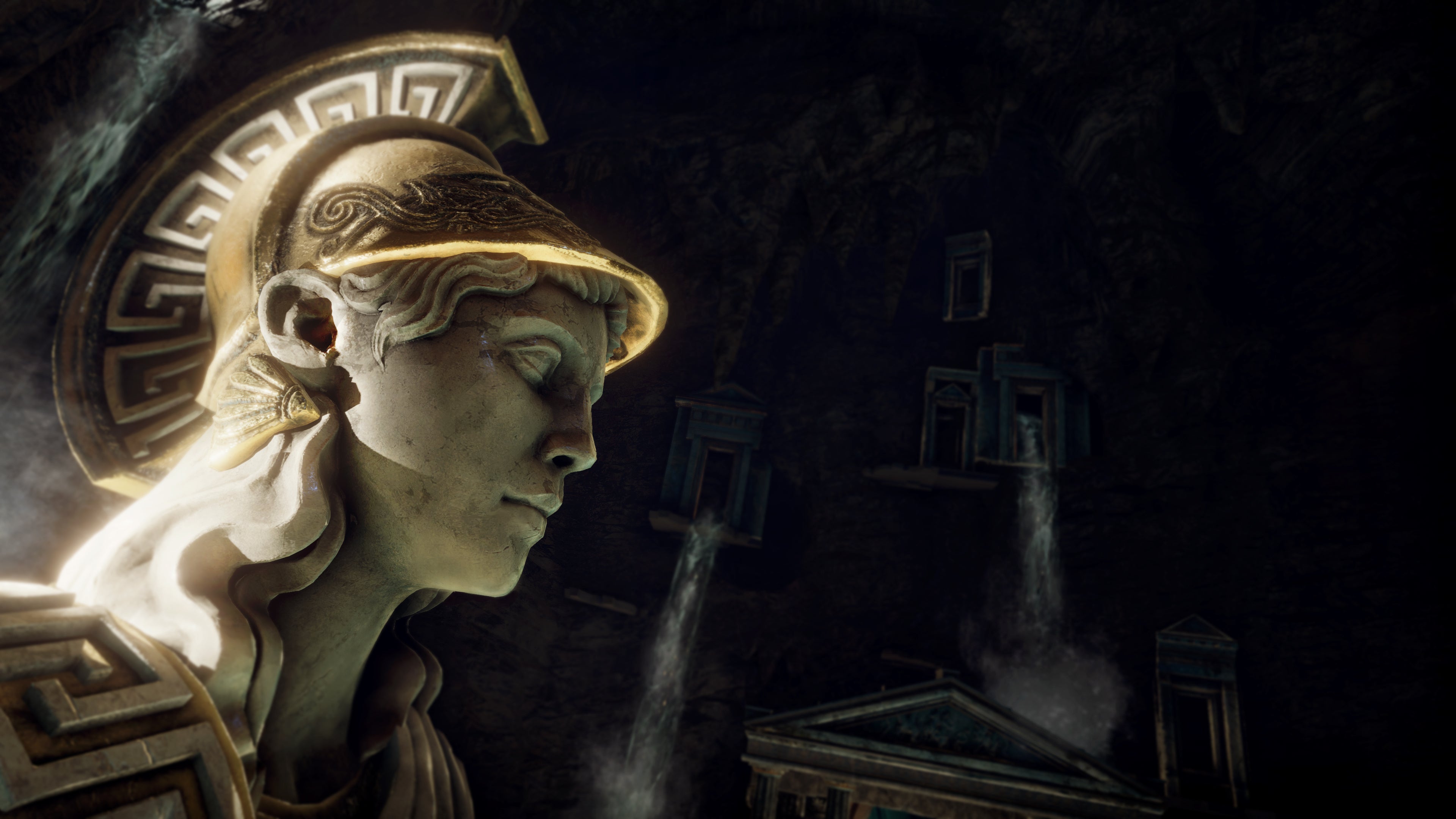 Ubisoft has a new “VR escape room” set in the world of Assassin’s Creed that you can play at over 100 different locations around the world. It’s fun, but despite its stated ties to “escape rooms,” Beyond Medusa’s Gate is more of an hourlong VR action game than a cooperative brain teaser.

The first of Ubisoft’s VR escape games was called Escape The Lost Pyramid, which tied in with Assassin’s Creed Origins; this one, set in a cave on the shores of ancient Greece, ties in with Odyssey. Either two or four players are locked together in the cave, and have to team up to face a variety of challenges to get out.

The equipment in the room seems like a fairly off-the-shelf setup; the venue we visited in the San Jose, California area had a small room with a desktop PC mounted on a wall shelf and an HTC Vive with motion controllers attached to it, via wires that were suspended from the ceiling to (mostly) stay out of your way.

This is probably why they can roll it out to 100 different places around the world so quickly, but it’s also less exciting than what you’d find at, say, the Shinjuku VR Zone, where you can play custom VR-powered installations with special controllers and other elements that you wouldn’t be able to get at home. You begin by going through a basic tutorial. You can walk around in the area bounded by the walls of the IRL room you’re in, and teleport around the virtual world to make bigger movements. You can manipulate objects with your hands, which you learn about by customising your character’s avatar in a dressing room with a mirror. The other players are milling about in there, too, and you can dress yourself up while goofing around with them.

Once everybody’s ready, you jump into the old reliable Animus and get a brief rundown of your mission, which is to find an ancient ship and get it out of the cave. You then proceed through a series of very basic puzzles: You first have to get out of a small room, which you can do very quickly by manipulating a few objects inside it, like a fiery brazier and some switches on the walls.

Then you’ve got to figure out how to open up another door by manipulating three switches and a picture made up of rotating discs (a nice callback to Assassin’s Creed II’s puzzles).

It’s a simple puzzle, and they don’t get any more difficult—it’s all just simple object-manipulation stuff with a clear goal and very little chance that you’ll do the wrong thing. In fact, much of it was action-based, like shooting arrows at targets or climbing across a series of handholds on a surface that another player was manipulating remotely.

There’s a big focus on teamwork; almost all of the tasks require at least two people to accomplish them. But the way these work tends to be asymmetrical, with one player doing the “fun” thing while the other one does the “boring” thing. Just by coincidence and where I happened to be walking when we were messing with the challenges, I always ended up having to do the “boring” thing.

My partner was always the one using handholds to dangle over 30.48m drops while I stayed on the ground to make sure those handholds were still active. (I’m being circumspect with these descriptions so as to not spoil the experience for would-be players.) I might have felt better about the experience had the design let both players experience both halves of each puzzle.

As a piece of VR spectacle, Medusa’s Gate is pretty cool; as you get deeper and deeper into the cave, you discover lots of larger-than-life secrets that can be pretty impressive to experience with a friend. Once it’s all over and you get out, the game takes some virtual “photos” of you, and I’m pleased to report that we had the presence of mind to do this: 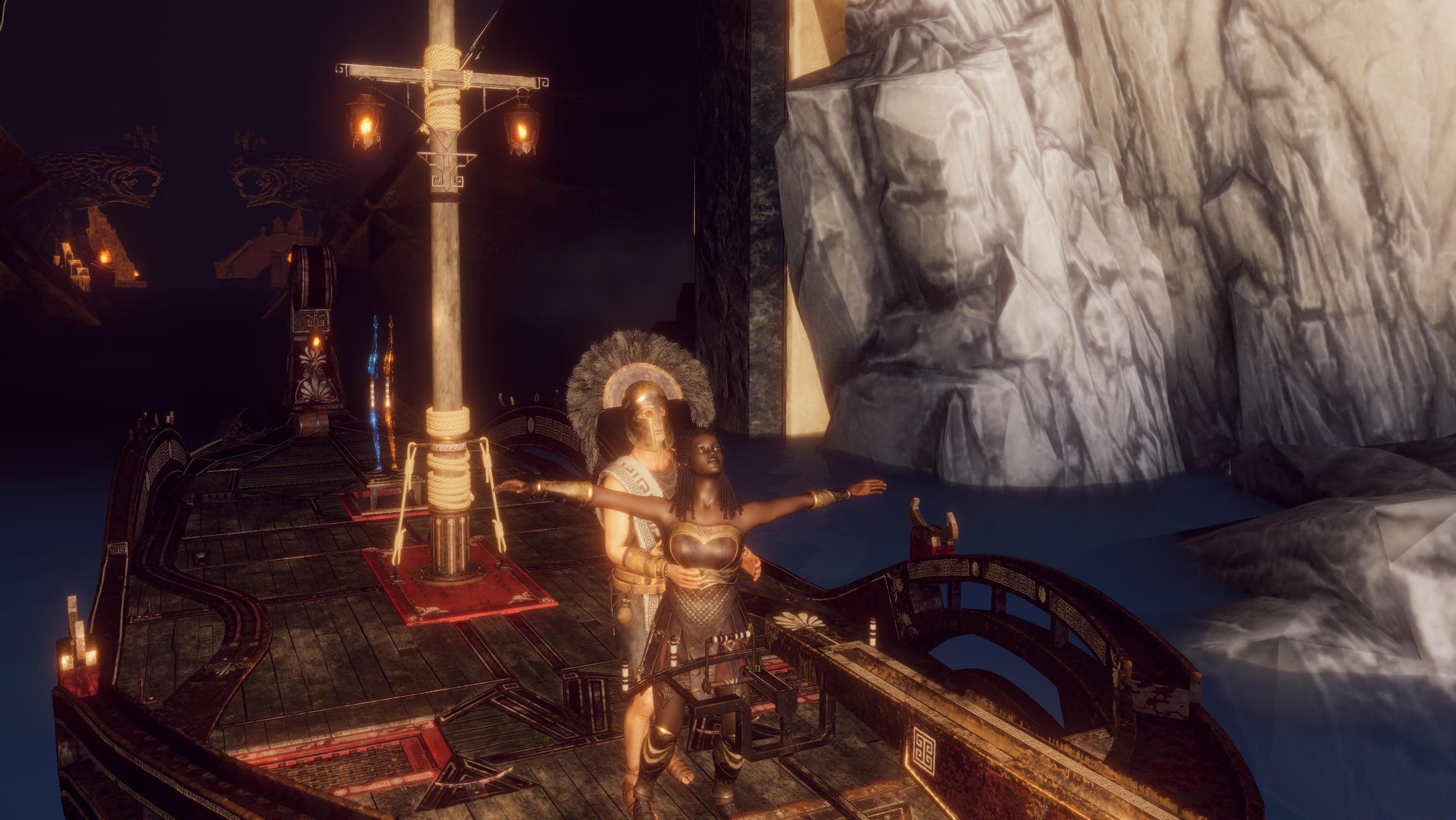 Medusa’s Gate didn’t really leave me feeling like I had just played an “escape room;” the puzzles were too un-puzzle-y, more like the sort of basic round-peg-in-the-round-hole types of things you’d find in… well, a triple-A action-adventure video game series in which a player getting “stuck” is considered to be an unforgivable design sin. If you don’t have a room-scale VR setup at home and just want to pay around fifty bucks for an hour of finding out what that’s like, you may want to try this; otherwise you should just stick to the real-life sorts of escape rooms.