Yesterday Bethesda released a free promotional tabletop role-playing game module set in Elsweyr, the setting for the Facebook page due to its striking similarities to a Dungeons & Dragons adventure published by Wizards of the Coast in 2016.

“We have pulled a previously shared ESO tabletop RPG adventure while we investigate the source,” a post on Bethesda’s page now reads. “Thank you to those who reached out with concerns.”

The Dungeons & Dragons module in question is “The Black Road”, published as part of the D&D Adventurers League, the ongoing official campaign of the classic tabletop RPG.

Written by Paige Leitman and Ben Heisler, it’s an adventure for beginning characters that tasks them with guarding a caravan delivering a statue to the Shrine of Axes in the village of Parnast.

The Elder Scrolls Online: Elsweyr adventure, helpfully archived online by the folks over at Ars Technica and still available via Bethesda’s Dropbox, tasks players with guarding a caravan as it travels through the desert of Elsweyr in order to deliver a statue to the city of Rimmen. According to the byline at the end of the PDF file, this adventure was written by someone named Karrym Herbar. The Facebook post that announced the adventure, now removed, said it came from “our friends over at Bethesda Netherlands.”

Here’s the opening of The Black Road”, via a copy of the module I purchased for a couple of bucks from The Dungeon Masters Guild store.

There’s nothing like the desert to make people feel small and insignificant. In every direction, huge dunes roll across the landscape, and an even bigger sky looms above. The oasis of Vuerthyl is a motley collection of sun-bleached tents in the vast Anauroch desert. Through various means, it has been arranged that you would meet Azam the caravaneer in the large, Calimshanstyled tent that passes for a tavern here.

A pair of tieflings, who seem to be unaffected by the heat, eye approaching visitors warily. The dim interior of the tent is a relief from the bright light and wind, though it’s as hot here as anywhere else. The gentle sounds of a stringed instrument fill the air, and the people inside are hunched over food, drink, and conversation. A dragonborn with rust-coloured scales greets you, and guides you to a private table. There are a few other adventurers here.

And here is the opening to the Elsweyr module.

Nothing beats the desert to make people feel small and unimportant. In every direction enormous dunes roll across the landscape, and an even larger empty air skies above it. The oasis on the border between Cyrodiil and Elsweyr is a colourful collection of sun-drenched tents in the vast desert of Elsweyr. In various ways it is arranged that a group of adventurers would get acquainted with the caravan leader named Kar’reem.

His big tent is filled with several Khajiit, which seem unaffected by the heat, they stare at you cautiously. The dim interior of the tent is a relief compared to the bright sunlight from outside, even though it is still as hot inside as out there. The soft sounds of stringed instrument fill the air, and the people are busy over eating, drinking, and conversation. An Argonian servant escorts you to an empty table.

It’s a very sloppy rewording of “The Black Road” version, with The Elder Scrolls locations replacing those of Dungeons & Dragons’ Forgotten Realms setting. The whole text is like that. The original D&D version mentions a “dragonborn servant.” The Elder Scrolls Online version changes it to an “Argonian servant.” The original version has the players fight goblins. The copy changes it to bandits.

Bethesda’s announcement post was filled with people pointing out similarities between “The Black Road” and the Elsweyr adventure. Eventually, Paige Leitman, co-author of the D&D module, entered the thread to post a series of comparisons between the two. Ars Technica archived the whole set. Here’s one, comparing the information the leader of the caravan is willing to give players on the two adventures. Even the non-player character’s name is the same. 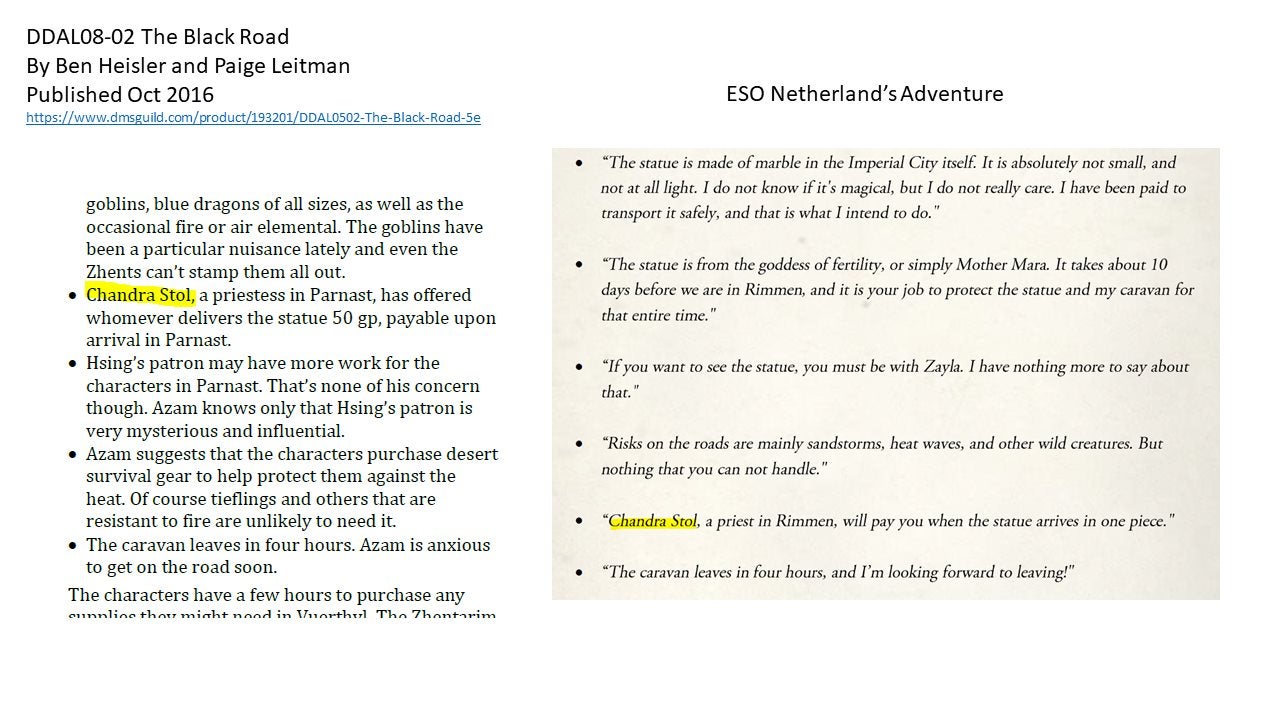 Having read both adventures through completely, it’s obvious to me that the Elsweyr adventure was completely cribbed from the work of Leitman and Heisler.

I can see how the blatant plagiarism might have slipped by Bethesda’s notice, but somewhere down the line someone took the pair’s work, twisted it and presented it as their own.