During a developer live stream today, BioWare gave Anthem players their first look at the game’s upcoming Cataclysm event, a limited-time end-game activity that will take place in an entirely new environment.

Based on what BioWare showed, the Cataclysm, which will last six weeks, seems to function like a mini-freeplay mode. Players load into a special area with its own overhead map broken up into different sections that can be explored in any order. Some of the rewards players can collect in Cataclysm will change from week to week, as will the map, with more activities getting added as the weeks go on.

Cataclysm will be score-driven, with higher scores apparently granting players better rewards and a higher amount of a special new currency. It’ll also have a countdown timer ticking down. When it reaches zero, the mission ends. Players can regain time by completing different activities on the map, like arenas, which are localised enemy encounters that look similar to the ones in the rest of the game.

The more arenas players clear, the higher their score, with more arenas being added to the map as the weeks go on. The arenas also have orbs at the centre of them. When the orbs are destroyed, they create safe zones that protect players from the environmental hazards of the Cataclysm.

Ben Irving, the game’s lead producer, said that there will also be lots of secrets and puzzles hidden throughout the map. The more efficiently players move through the Cataclysm, the more of these side activities they’ll be able to get through, boosting their overall score and potentially netting them additional rewards. He also stressed that it won’t have a level requirement, so new and old players alike can try it when it becomes available with rewards scaling as needed. 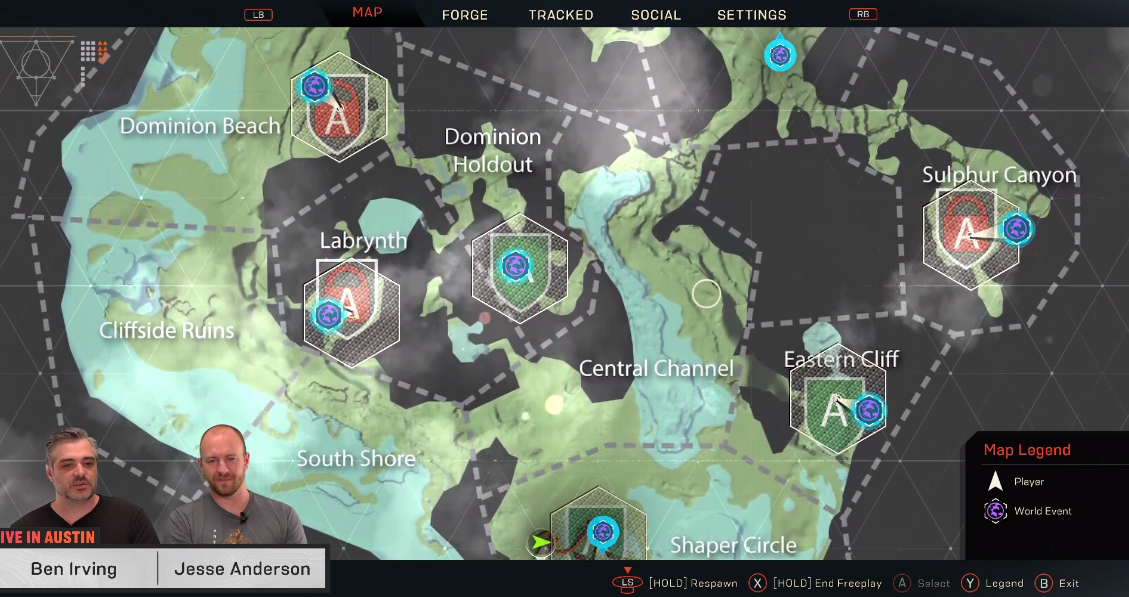 If the activity has a main boss, BioWare didn’t show it. While this was only a brief look at Anthem’s major end-game activity, it seemed much less like a Destiny-style raid and much more like that game’s “Prison of Elders” mission, which had waves of enemies and encouraged players to prioritise dispatching them quickly over puzzle-solving or story-driven exploration. 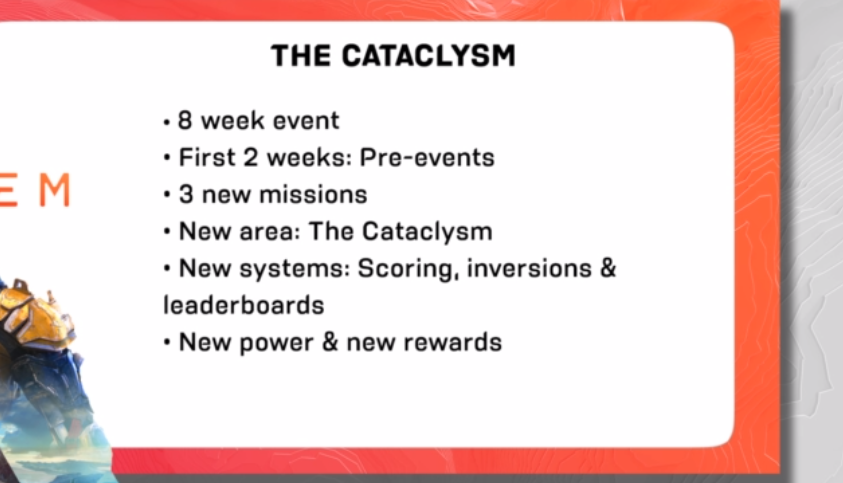 Cataclysm, which was supposed to launch sometime this month, doesn’t currently have a start date. Before it’s rolled out for everyone, however, Iriving said the plan is to release it first on a test server for PC players to try it out and provide feedback. Effectively, Anthem’s first major content expansion after release is going to go through a brief beta period. 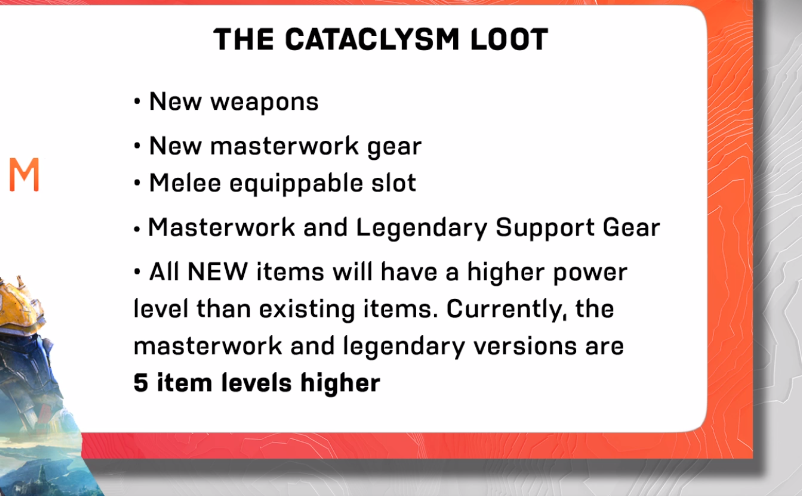 When Cataclysm is finally released, it’ll coincide with an update to the loot system in the game. For the duration of Cataclysm, there will be a new vendor at Fort Tarsis who will give players war chests in exchange for a new type of currency. Irving didn’t clarify whether these chests will function like loot boxes or if they will give pre-determined rewards.

The game is also getting a new gear slot for melee attacks. While different pieces of melee gear won’t change the appearance of your melee weapon, they will change how powerful it is and what its secondary status effects are. That will give players more options in how they execute attack combos.

Also, the luck stat is going away. Now, the game will just treat every player as if they had a maximum luck stat, which will in turn cause more loot to drop overall for the average player. 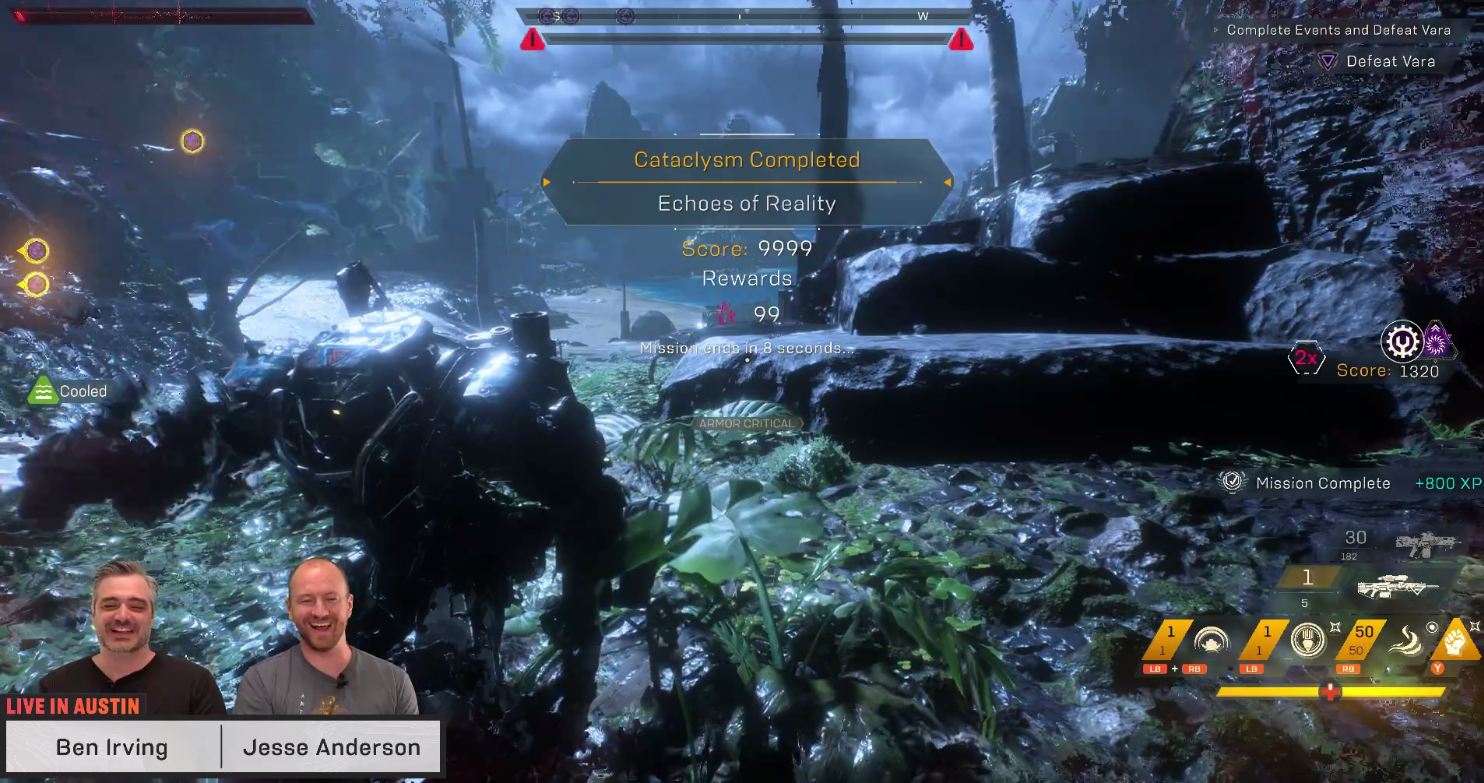 More significantly, Irving said that the new loot being added to the game during the Cataclysm will be five levels higher than the current existing end-game gear. It’s unclear if this will mean that players’ existing inventory of guns and armour will be made obsolete, or if there will be some way to level it up or craft new versions that are in line with the new gear. Irving said that BioWare will be taking feedback during the testing phase before deciding what to do there.

Since very little of the event itself was actually shown, it’s hard to know how interesting the fights and exploration aspects will be, or if the rewards will feel like they’re worth the effort (unlike a lot of the game’s current activities, which don’t). It’s possible BioWare is holding back from showing off the most exciting aspects of Cataclysm right now, but so far, it doesn’t yet look like a game changer.