No Man’s Sky players are pretty used to doing everything by themselves. Before the game’s revitalizing Next update, players who stuck with the game since it launched turned its universe into a series of sprawling civilizations, many with their own government, police forces and even wars. Now that more players are joining the game with each update, players wonder whether Hello Games will add cities to planets where people can settle down.

Some players have concerns about the technological hurdles of adding dense population centres to No Man’s Sky. Others insist that the lone-explorer-of-space lore of the game wouldn’t allow for cities anyway.

We spoke to some players who aren’t waiting for Hello Games to figure it out or add anything. They’re trying to build cities into the game right now, with mixed success.

Andy Krycek, a 30-year-old gamer in the UK, is “pretty much ‘2nd in command’ moderator of the Galactic Hub,” the largest and most well known community of players in what’s known as “civilised space.” These players have banded together in one area of the galaxy for the purpose of socialising, boosting their local economy, and generally helping each other out.

Krycek told Kotaku over Twitter direct messages that he and the council for the Galactic Hub had previously tried to create a “neighbourhood vibe.” They dubbed the colony Tracy Island and filled it with a series of bases overlooking a lake, within walking distance of each other.

Normally bases are much farther away from each other—the game’s universe is vast enough that you could set up a base on a planet and be the only one to live there. Settling so close to each other was an experiment to see what was possible, and the mere fact that it worked was an achievement, Krycek said. 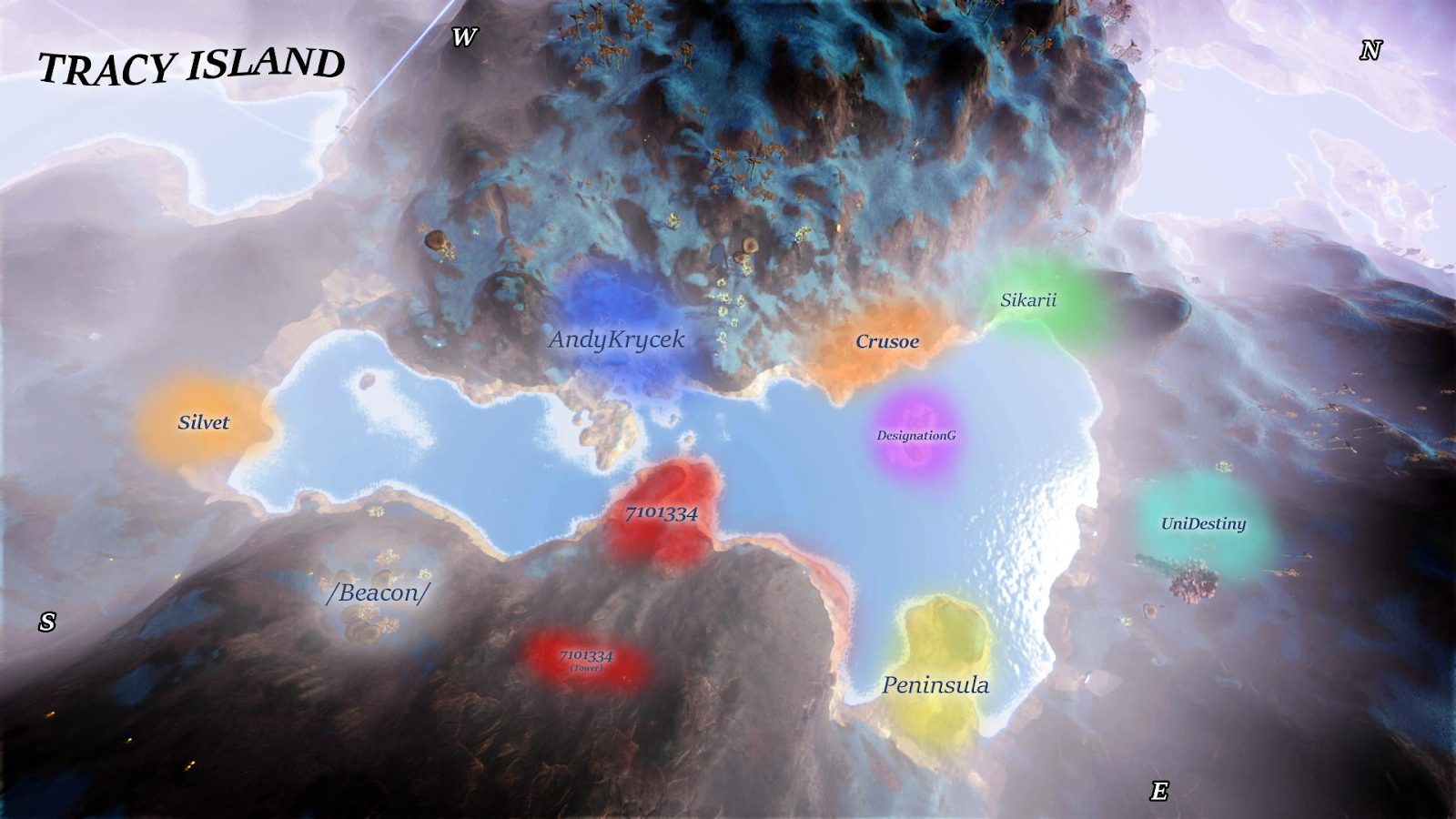 “We were close together, enough to make it feel like a real neighbourhood of friends dotted around a picturesque lake,” Krycek said. Eventually, it succumbed to their greatest enemy: lag.

“You will get to a point where you will notice a significant drop in frame rate and an uptick in crashes (at least for me on PS4) making it barely playable,” Krycek said. “Eventually I had to abandon my Tracy Island shack as it would constantly fail to load, partly due to the rest of the planet being inhabited by over 40 bases for the Galactic Hub community too.”

He’s attempted another neighbourhood build, called Axby Delta, where he was able to get multiple bases close to each other on the top of a mountain, but this process is experimental. 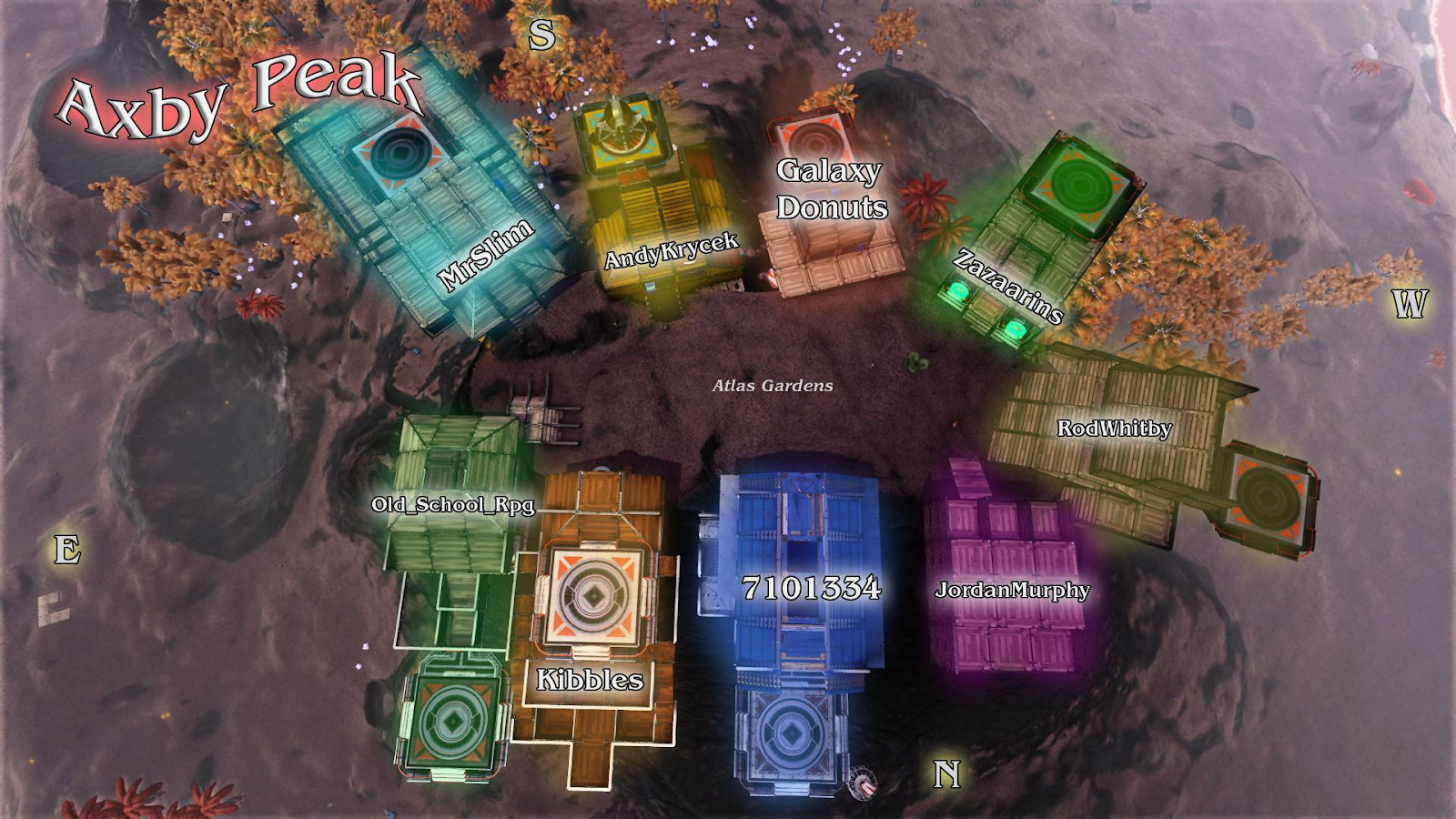 Axby Peak, the community atop a mountain on Axby Delta (Screenshot: Andy Krycek, (No Man’s Sky)

Mount Loper, a Galactic Hub community specifically made for ambitious builds, also struggles with lag issues. Because of the instability of dense population centres, Mount Loper has implemented rules about where you can build so that the entire community doesn’t crash.

Mount Loper manages to still get a neighbourhood feeling by connecting the bases together with roads, but overall it’s more a living museum than a place to live. Nevadander’s goal is different, though. Not only does he want to create a superstructure by combining the bases of several different players, he also wants to figure out how to do that without the game eventually crashing.

“Our goal is to try and slide in below the hardware limit and keep this thing playable,” he said. “We’re building in such a way that all of the bases interconnect, and as the build grows it can merge into a superstructure, provided we don’t just break the planet first.”

Nevadander is a gamer from Oklahoma in his 30s, who said he is “known as Kenny around the house.” He has played No Man’s Sky since launch and has been active in the community for just as long. The Deep Thought Collective, a No Man’s Sky civilisation Nevadander founded, had been coordinating to see how many players could inhabit bases close to each other before the game would become unplayable.

“This build started with just two of us seeing how well the multiplayer building works as of the Visions patch,” Nevadander said, referring to the patch that added true multiplayer to No Man’s Sky in November of 2018. 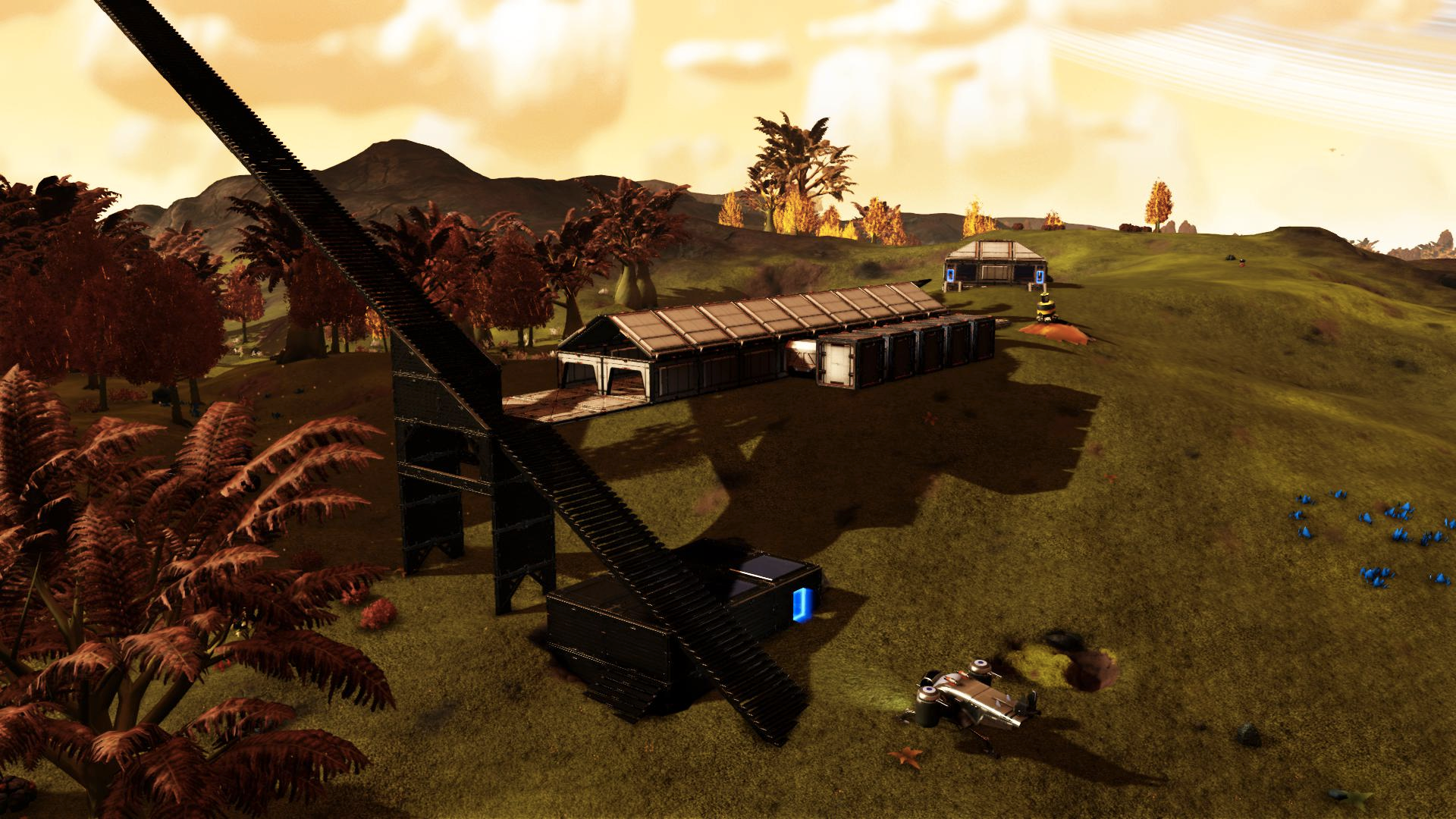 The initial attempt on a lush moon. (Screenshot: Nevadander, (No Man’s Sky)

“We were able to connect two bases with ease and posted about it in our Discord. We gained a third and fourth partner and promptly broke the moon we had established [them] on,” Nevadander continued.

“It was a lush orb with many creatures and the clutter was just too much, we all started receiving random BSOD [Blue Screen Of Death] until adding a fifth ended in a predictable fatal crash.”

Nevadander isn’t giving up, though, and said that pushing the boundaries of the game is part of the ethos of the Deep Thought Collective. Although he was able to reach up to five players at a new location—a barren, rocky moon—adding a sixth broke the location last night, leading to “massive terrain errors.”

He said that so far, the biggest hurdle to creating a community like this is the game itself. Players have to make sacrifices to their builds to make sure they load into the game properly, because glass, windows, landing pads, and vehicles can cause the game to crash. Even if you manage to build something that loads correctly for you, that doesn’t mean it will load correctly for everyone.

“Base sharing for those that join sessions together works flawlessly, until it doesn’t,” Nevadander said. “New arrivals have to join a session with someone who has the entire colony in view, and then be joined later by all others, for the build to show for all.” 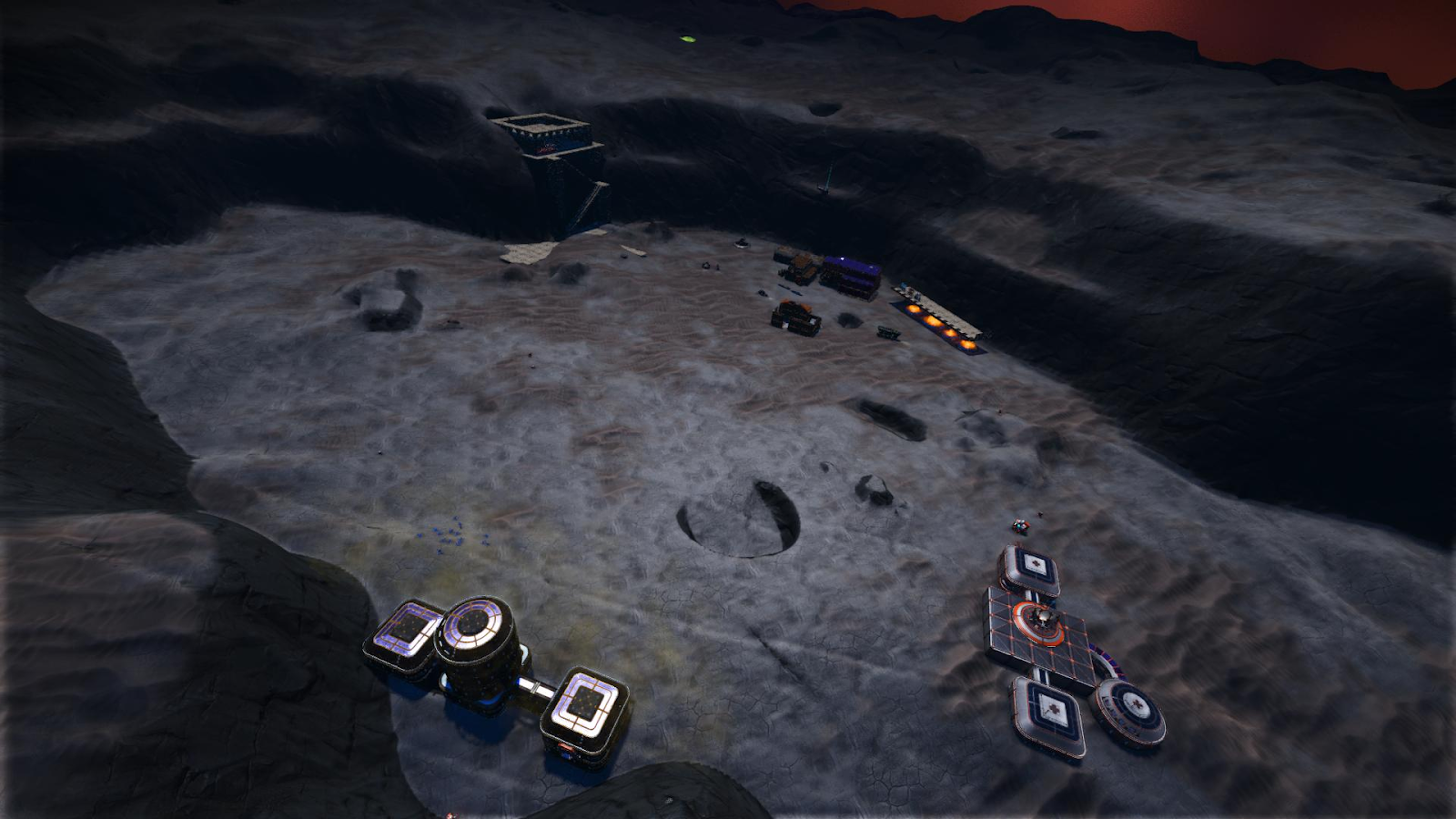 This second attempt at a city broke after adding a sixth player. (Screenshot: Nevadander, (No Man’s Sky)

Usually, when you share the bases you’ve built in No Man’s Sky, they’re visible to other players automatically and those players can just fly over to them. For these bases, players need to approach more cautiously.

“We have started establishing parking lots in nearby systems,” he said. On another planet in the system, they’ve built a terminus ring, which is a location that players can warp to and safely summon a freighter from. You can keep your huge space vehicle by that planet, just like you’d keep your car in a parking lot while you visit the mall, and then bring your smaller ship to the city. That smaller ship puts less strain on the game.

“A quick hop to said ring and back can also help sync new parts, and load missing chunks of the complex,” Nevadander said.

Despite what they’ve been building, Krycek and Nevadander don’t want Hello Games to add cities. For them it’s not about the technological hurdles or the game’s lore. It’s because they want to be able to do it on their own, as they have always done. Nevadander envisions players flocking to these more centralised communities if they can figure out the trick to it.

“With each person adding just a few pieces of equipment and farming it all adds up rather quickly. Your neighbour may have things you don’t even have a blueprint for. As we build, the location will become more and more photogenic, which is always a plus for No Man’s Sky players,” Nevadander said.

“The main benefit of a project like this is: instead of waiting for cities to be added by Hello Games, we built our own. On rock and roll.”