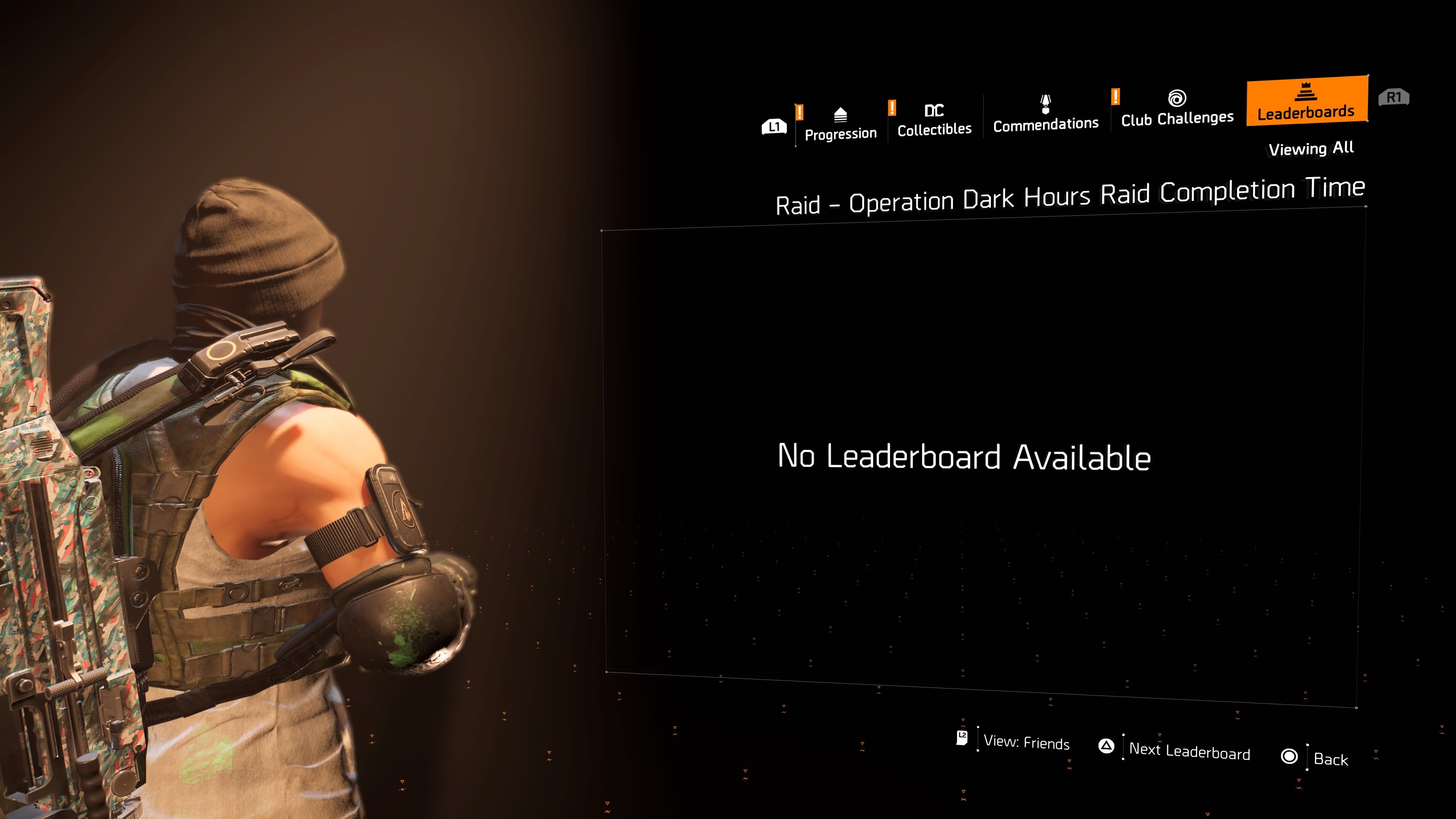 More than 24 hours since it launched, the Division 2’s raid has only been cleared by people playing the game on PC. Players on Xbox One and PS4 have failed repeatedly, leading to discussions that the raid is far too difficult for those playing on console.


The raid, called Operation Dark Hours, is set in a fictionalised version of Washington DC’s Reagan National Airport and challenges eight players to battle from the entryway to the tarmac, facing four major boss battle encounters along the way.

The first team to complete the raid did so just over five hours after it launched at 7:00AM AEST on Friday. They were playing on PC, and within minutes other PC players followed. Leaderboards for the raid on PS4 remain empty. When we were last able to check the Xbox One’s leaderboards at 5:00AM AEST today, those were empty, too.

“It’s unplayable on console,” one person wrote on Twitter in a reply to an official Tweet this morning hyping the raid.

On the game’s subreddit, where player frustration has sprouted rows of threads, popular titles include: “Console Gamers got shafted For the raid?”, “Petition for DEVS to complete raid on CONSOLE!”, and “World’s First on Console Deserves a White House Photo of their own.” That last one is a reference to the in-game accolades being given to the team that first cleared the raid.

Raids are meant to be challenging. They are intended to be some of the most difficult tasks available in an online game.

PC players also often have some technological advantages, including higher frame rates and more precise mouse-and-keyboard controls, which can allow players, especially in shooter games such as Destiny or The Division, to aim more quickly and more accurately. That’s one of the main issues console players struggling with Operation Dark Hours are citing.

They noted that encounters in the raid seemed to rely on players being able to quickly turn and aim without resorting to taking cover, something that’s much harder to do on consoles. They added: “the slow nature of the animations make it difficult to mow down multiple enemies in a short period of time.”

On forums and social media, console players have been saying that they’re stuck on the very first boss, an extremely tough enemy called Boomer.

In a stream yesterday, the game’s developers said that Boomer would serve as a test to ensure players had powerful enough character builds to get through the raid. Beyond that, they said, things would be more a matter of tactical execution than of needing more character potency.

The Boomer encounter requires one player to get the boss’s attention and kite it across the room, wheeling around to shoot at its chestplate to stop it from auto-healing. Other players will simultaneously try to down it while fending off hordes of relatively weaker troops.

Later encounters require precise shooting at swarms of small drones in treacherous areas where enemies rush in from all sides. Players need to be able to turn and shoot accurately and quickly.

If Boomer is a power-level check, he’s confirming that console players are in deep trouble. A Redditor who goes by the name bf_pheno reported today that it took their team 10 hours to beat Boomer on PS4. That feat has been received as extraordinary in the game’s community, where there’s little if any discussion of how console players are faring in the encounters that follow.

A video of bf_pheno’s team’s ultimately triumphant attempt at Boomer begins with one member of the team ready to give up.

“”I’ll give it three more tries and then I’m done.”

“I’ll give it a little more than that. We can get this done.”

And, finally, they do.

In Reddit comments, bf_pheno indicated that one of his colleagues was drunk and was kicked out in favour of a better player, which did make things easier. “But they need to adjust the difficulty for consoles imo. PC have too much of an advantage,” they added.

Later, they quipped: “Can’t wait to spend a whole day on the last boss :))” It took the PC team who first beat the raid three hours to beat the raid’s final boss, longer than the three earlier ones combined.

It’s unclear how much further they’ve gotten in the raid, but the blank PS4 leaderboards indicate that they haven’t finished it.

In an article yesterday about console players’ struggles, writer Paul Tassi explained that the situation is made worse by the fact that The Division 2 doesn’t let players hit a higher level than the one needed for the raid:

The current max of all content in The Division 2 is 500 gearscore, the raid drops 500 gearscore gear. So there is no way to “overlevel” for it in time, rather you have to focus on min-maxing your build within the 490-500 GS range, and the raid has made it clear the best and really only path forward is DPS, DPS, DPS, so you might be 498 like me, but unless you’re stacking +30-50% weapon damage, AR damage and damage to elites, you’re not doing enough damage to make meaningful progress in even the first section of the raid. I watched streamer teams yesterday that have gone through some of the hardest content in every game out there, and yet this was such a gear check that they simply had to give up, almost all of them at the very first encounter.

A website called Destiny Raid Report that tracks world records in Destiny 2 raids indicates that, once the game was on PC and consoles, PC players always completed the raids first. Console players have tended to lag behind, but only by hours. In only one instance did console players take a day longer than PC players to first finish the raid.

The game’s developers at Massive have yet to publicly address console players’ struggles, and a rep for the game did not reply to a Kotaku request for comment. There’s a good chance that the weekend will provide players more time to improve their performance in the raid and identify more successful strategies, but if console players keep failing, it’s clear something will need to change.