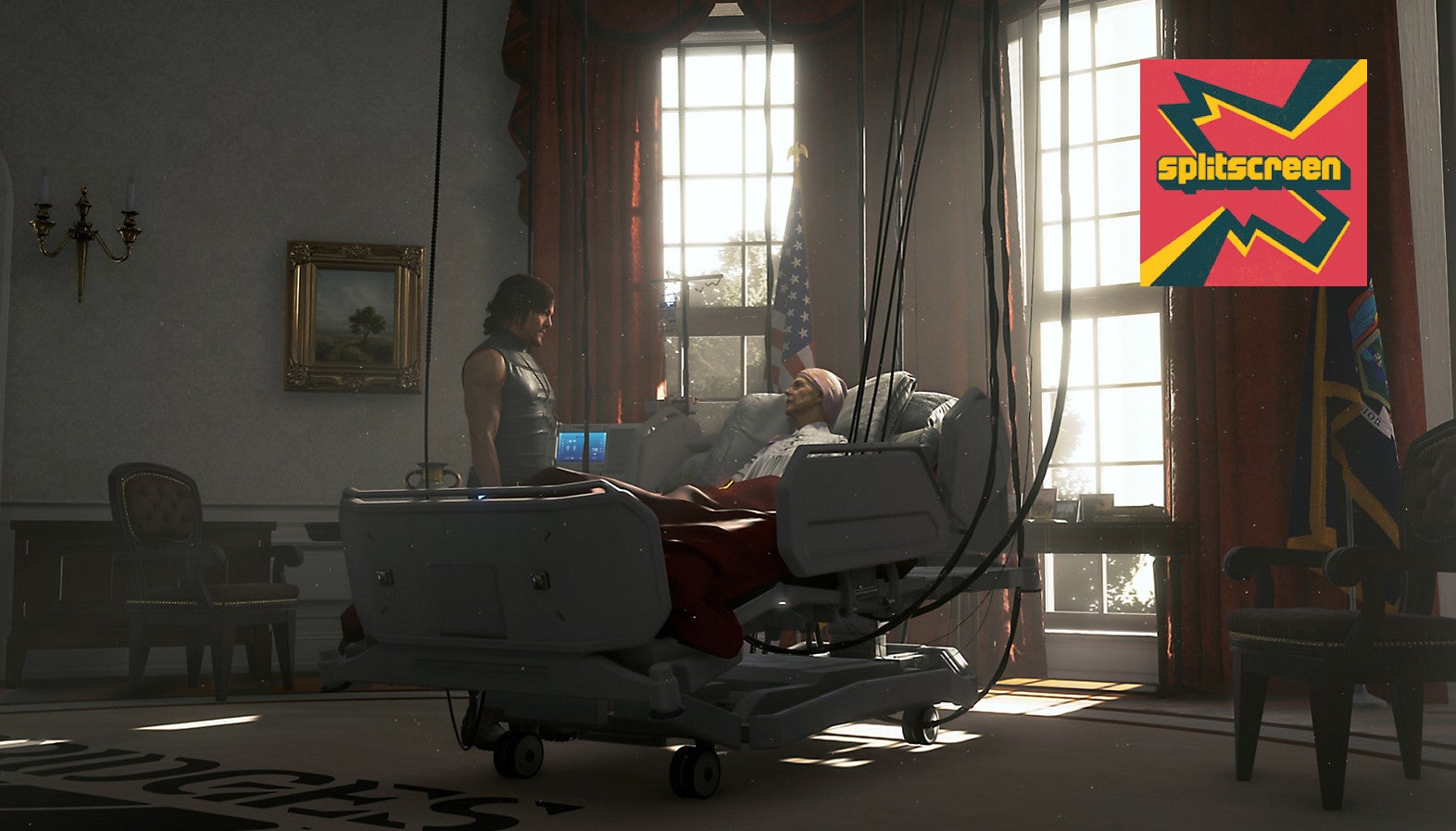 This week on Kotaku Splitscreen, how could we not dive into the delicious insanity of yesterday’s nine-minute Death Stranding trailer?

First we talk about some video games we’re playing, from Dark Souls 3 to Observation, then dive into news of the week (29:00) including Death Stranding’s ridiculous new trailer (and 2019 release date!), Call of Duty: Modern Warfare, and EA Play. We hear from a listener who does game analytics for a major video game company, then we get into off-topic talk on Veep, Educated, Fleabag, 24, 24, and 24 (1:04:54).

Here’s the trailer, in case you missed it:

And here’s an excerpt from the pod:

Jason: …What did you guys think of that batshit nine-minute trailer, in which a guy takes off a mask to reveal another mask?

Kirk: It was a very good video game trailer.

Maddy: I think this is the first trailer where I started to be like, OK, I think I can understand some of the threads of this wacky sci-fi universe that this game is going to entail. There’s some sort of travelling between dimensions, babies are involved, and there’s a grid laid across a huge area that is also involved in travelling between dimensions. More of those plot points, if we can call them plot points, are introduced here, and also the idea of Homo Demons as antagonists, whatever the fuck that is. It’s also probably the closest to an actual story trailer for this game that we’ve gotten so far—it’s not just a series of bizarre images. But don’t worry, it’s also still simultaneously a series of bizarre images… And there’s some actual gameplay footage. We’ve seen a little bit of that, characters running around, in the sense that they’ll be able to climb, and have a backpack and stuff like that.

Jason: They’ll have a backpack!

Maddy: Now we know they can hit each other with briefcases. That’s part of it too. And also people can climb through a swamp and be a skeleton. I dunno. It’s exciting. It’s great. The game looks good and weird.

Kirk: I thought this trailer was a reminder of how unimaginative a lot of video game trailers are, or just a little of video games are. It’s something Kojima does well—I think he serves a useful function in the creative space of the industry, because I know there are a lot of creative people out there, people have a lot of wild ideas, but there’s no one else showing ideas like that. You can watch any three seconds of that trailer and walk around thinking, ‘What the fuck was that? That was the weirdest thing I’ve seen in a long time.’ And that’s really cool, to just be in the imagination space of this total weirdo, whose whole goal is almost to come up with the most bizarre things. And then there’s the question of will this tie together into something that makes sense?

Jason: There’s a maybe 0.1% chance that this game makes sense. I think it could be cool and fun and good, but the chances of it making it sense—

Maddy: I’ve been known to like games that don’t make sense, so that’s fine by me.

Kirk: I guess when I say ‘make sense,’ I don’t even mean you walk away with a complete sense of what happened. I just mean it ties together in a story that moves from point A to point D and ends. I think it’ll do that; most of his games do that. And it doesn’t have the baggage of the Metal Gear universe, so it’s a whole universe, which is nice, to play the first game in a universe that maybe— I’m assuming this won’t be a standalone. It’d be kinda nice if it were, and if it just began and ended and he went and made something else instead of establishing a thousand narrative threads that are then going to go on for the next two decades over all these games. I sort of would like it if it ended. I did get from the trailer a sense of it as a video game—there were stealth elements, there was shooting, there was sneaking around in the tall grass.

Maddy: There was building. This is going to be the next Fortnite.

Jason: Don’t you play as a postman who’s carrying things around, babies and boxes or something?

Jason: So that’s what it’ll be. It’ll be a delivery simulator.

Kirk: I like that there’s a character named Die-Hardman.