Druidstone: The Secret of the Menhir Forest is pretty to look at, interesting to solve, and absolutely ruthless whenever you get things wrong. Drenched in classic fantasy and tabletop role-playing game mechanics, it’s part of a new breed of tactical role-playing games that leans more on puzzles than numbers.

The game has you explore the fictional setting of the Menhir Forest, a mystical place cultivated by druids but that’s under attack by mysterious evil forces looking to claim its power for themselves. Selecting missions from an overhead map, you’re then plunged into battle.During one early fight my party of fantasy warriors is near death, including the person they’re meant to be escorting.

On my next turn, surrounded by a horde of mutant bugs and undead soldiers that keep spawning faster than I can thin their ranks, I unload whatever special attacks we have left. Even though we unleash our full arsenal of arrows, fireballs, and swinging swords, it’s not enough. Then I remember that I one of my characters has teleport.

I have them run to the level’s exit and swap places with our comrade, getting him out of harm’s way and finishing the fight with barely a health point to spare. This type of situation happens a lot in Druidstone, the latest game from independent studio Ctrl Alt Ninja Ltd., best known for the refreshingly clever dungeon crawling series Legend of Grimrock. Out on PC earlier this week, the studio’s latest departs from the mathematical duels that tactical strategy games in the vein of XCOM or Disgaea focus on.

It still has many of the same elements, including grid-based movement and action points to determine how many things you can do each turn, but that’s where the similarities mostly end.

Instead of analysing hit-rate percentages and comparing how much damage one attack will do versus another, Druidstone forces you to think about how your party’s various skills and strengths can be creatively leveraged to satisfy particular win conditions, whether that’s killing a specific enemy or reaching a certain part of the level.

The numbers—health, attack, defence— are all pretty small, and rather than simply grind your way toward more powerful characters, success requires thoughtfully arranging chains of cause and effect such that you can gracefully navigate danger without ever actually succumbing to it.

On the game’s Steam Discussion page, the developers compare the game to chess when explaining why there aren’t custom characters. Instead, each person in your party—Aava, an archer, Leonhard, a warden, and Oiko, an acolyte—have a particular tool set, and the bulk of the game revolves around figuring out how to use them to disassemble the game’s most lethal threats.

In some of the most basic cases this might mean luring particular enemies into a formation where Leonhard can swing his sword in a circle and kill all of them at once, or having Leonhard block while Oiko lets loose fireballs from behind. Later in the game, you get abilities like volley that lets Aava hit two targets at once, or ice, which Oiko can use to hit enemies in an X-shaped pattern, dealing lots of damage and also slowing them.

Battles can’t really be brute-forced so much as solved, trying out different combinations and sequences until you manage to survive long enough to complete the objective. In this regard Druidstone is a lot like Into the Breach—more about unravelling the logic of how a battle will play out and planning around that than seeking out good cover from which to weather the onslaught before returning the favour. 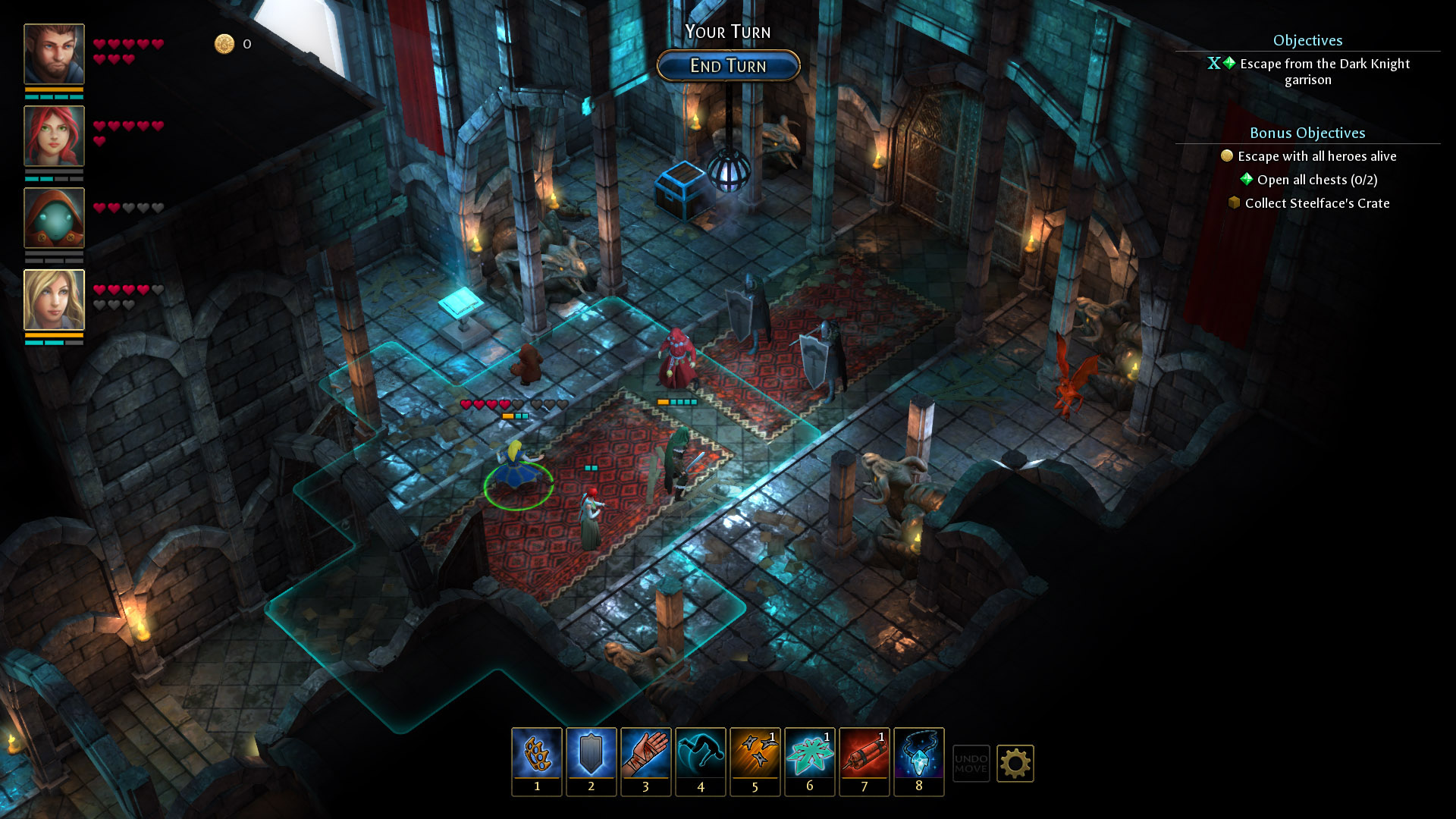 There is a progression system, with equipment that can be collected. There are also gems, earned for completing various challenges, that can be used to level up abilities by making them more powerful or increasing the total number of times they can be used per fight.

While rearranging gems between battle is pretty much a requirement given that each new level requires targeted approach, this isn’t the type of game where you’ll be grinding for loot and experience points.

For some, especially those eager for Ctrl Alt Ninja Ltd. to make Legend of Grimrock 3, that’s a letdown. I think there are plenty of other games like that out there to dig into, and Druidstone’s streamlined approach to strategy feels refreshing. Where Into the Breach was all about the nitty-gritty of sliding enemies around like a tile-matching game, Druidstone retains the core principles of RPG combat.

Dealing damage, whether with medieval weapons or ancient magic, is still the cornerstone of every fight. The game’s difficulty just happens to act like a crucible, melting away all of the extra baggage and impurities until all you’re left with is tightly-wound strategy with no room for error.

I’ve died and started over more times than I can count in my initial five hours with the game, but Druidstone isn’t so much a punishing game as one that just patiently keeps you at a distance until you finally get things right.