I Love My Beautiful Bike, The Only Friend I Have In Days Gone

The world of Days Gone is filled with a large selection of characters. Some are nice, others are jerks, most are a bit dirty because showers are hard to come by in the zombie apocalypse. But none of these grimy characters have captured my heart or soul quite as my motorcycle has. I would do anything for my bike and I love it very much.

However, it didn’t start this way. At first, I hated my bike. I despised it. The very first thing you do in Days Gone is driving your motorcycle while chasing an enemy over dirt roads and cracked streets. In those first moments with my bike, I found it was squirrelly and sloppy. I remember thinking to myself “Shit, I’m going to drive this thing for 40 hours?” Early game spoilers here, but not long after the first mission your bike is stolen and parted out.

So you get a new bike, which is slow, ugly and just a total piece of junk. I hated this new bike even more. Not only was it still hard to control, but now it was slower, lacked a turbo boost and seemed more fragile.

I really didn’t care about my bike until about an hour into the game, when it saved my life. 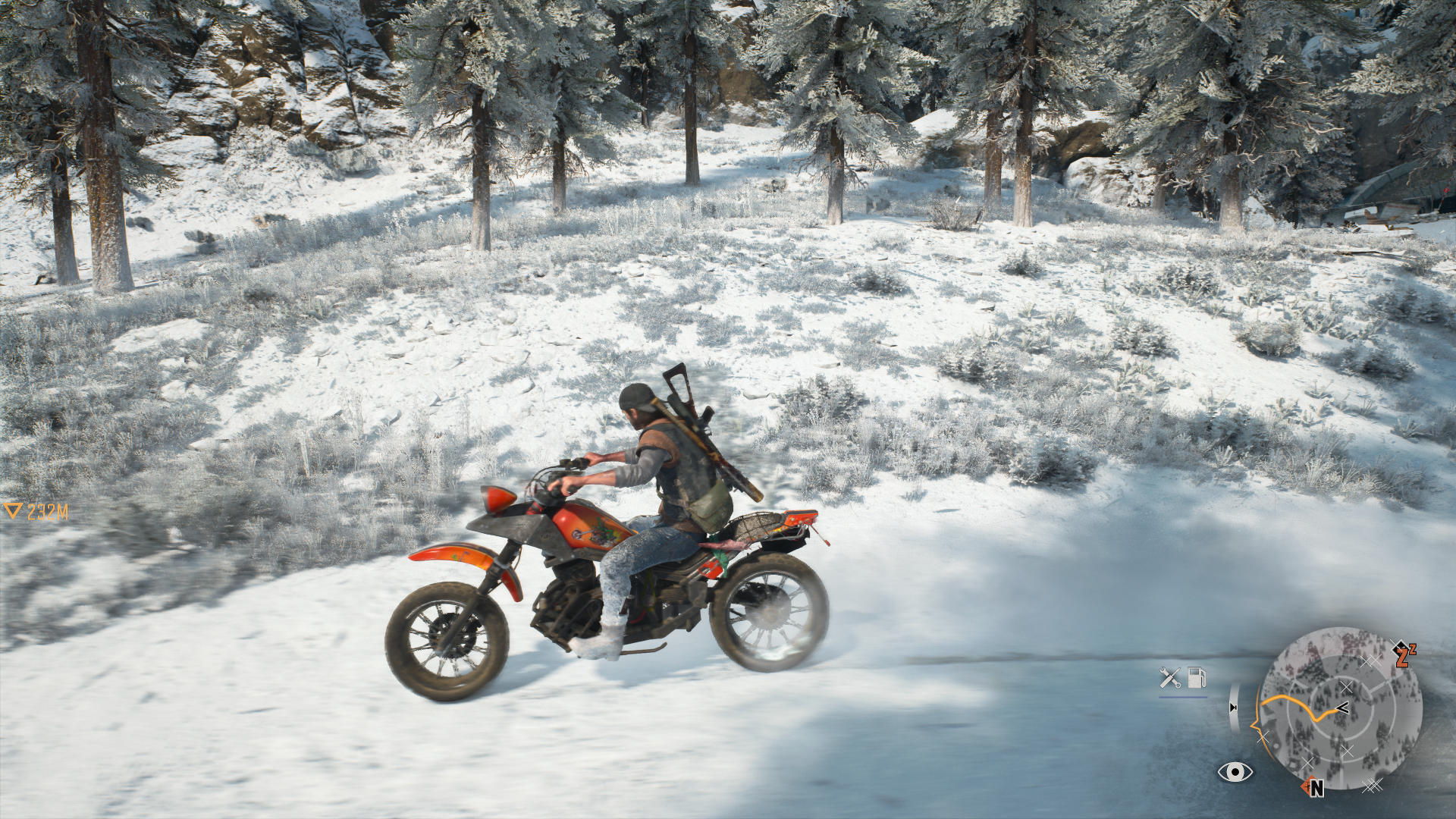 Early on in Days Gone, you don’t have a lot of firepower or abilities. So a small group of zombies can be deadly in seconds. So to avoid injury and death, I would sneak around areas until I felt the coast was clear. Well as I explored a small gas station a pack of around 5 or more freakers ambushed me. I panicked and tried to fight them off, but I quickly lost almost all my health. So I ran back to my bike, my stupid, crappy bike. I jumped on and escaped. I looked down at the bike and realised without it I would have been killed.

Maybe it wasn’t so bad after all.

As I played more Days Gone, I got more used to the way the bike handles. At first, I hated how sloppy and heavy it felt, but now I enjoy cruising around on my motorcycle. I can drift around turns, slowly slide down hills and paths, which saves fuel. When I first started playing, I would ram zombies I saw on the road. Now I avoid them. I don’t want to hurt my baby.

In the game, you help different camps with jobs and tasks. This earns you camp credits, which can be used to buy items, weapons, etc. At first, I was spending my camp credits on guns and ammo. But now I spend all of them on getting new upgrades for my bike. The moment I unlock new upgrades for my motorcycle, I quickly make my way to a camp and start improving my ride.

A bigger gas tank? Yup. I’ll take that. Tougher frame? Sure. I’ll buy it. Better suspension? Don’t even ask, just give it to me Mr. Mechanic. Whatever my bike needs, it gets. And then some. I also protect my bike now. If an enemy shoots it, I get angry. (Though not as angry and loud as Deacon.) I don’t really care about most of the characters in the game, they can get eaten by freakers for all I care. But not my bike. Don’t EVER touch my ride.

In Days Gone, you have to keep your bike repaired and fuelled up. This is important for a few different reasons, with the biggest being that without fuel you can’t fast travel. Also if you have no fuel you will be unable to drive away from a massive horde or dangerous bear. I always keep my bike fuelled and repaired. Every time I ride into camp, I’ll make sure to spend some credits to fix my ride up and top off the fuel tank.

When I’m out in the world, I’ll keep an eye out for fuel stations or gas tanks, always making sure my bike isn’t getting too thirsty. Before entering a dangerous area, I’ll park far enough away that my bike isn’t in any danger. I don’t want some arsehole shooting my motorcycle or knocking it over. If they did do that, I would have to go full John Wick on their arse.

The most painful feeling in Days Gone is when I crash. Even just bumping up against a parked car or rock makes me cringe. But even worse is when I slam into something going nearly full speed. Deacon goes flying and so too does my bike. There is nobody else to blame, unlike in Red Dead Redemption 2 where I would sometimes yell at my horse after hitting a rock. Come on horse, you really couldn’t have dodged that rock? But in Days Gone the only person to blame is me. I hurt my bike. I caused it to start smoking. I’m a monster.

Whenever it breaks, I always repair it and sometimes after nastier crashes, I’ll find my self whispering to the bike that I’m sorry. Which I am. I’m always sorry. Just like when I step on a cat and apologise even though I know they can’t understand. It doesn’t matter. They still deserve an apology. I haven’t yet finished Days Gone, but I’m getting close. I swear if this game makes me sacrifice my bike at the end, I will be very upset. I might not do it. Even if it is to save someone else, I won’t do it. I won’t give up my motorcycle.

I’ll ride to the day I die.