Lex Luthor’s Wildest Plan Ever Is Finally Starting To Unfold

Lex Luthor is a planner. A schemer. He plots and he strategizes—that’s just what he does. But recently in DC’s comics, he’s been slowly building toward one of the most bonkers plans he’s ever had. And in the world of this week’s new comics, it finally kicked off.

If you’ve not been keeping up with either Lex or the DC Comics universe over the past year or so, then…well, you’re going to have a wild time picking up this week’s Year of the Villain Special, a 25-cent onboarding anthology comic the publisher is using to launch into the titular storyline. 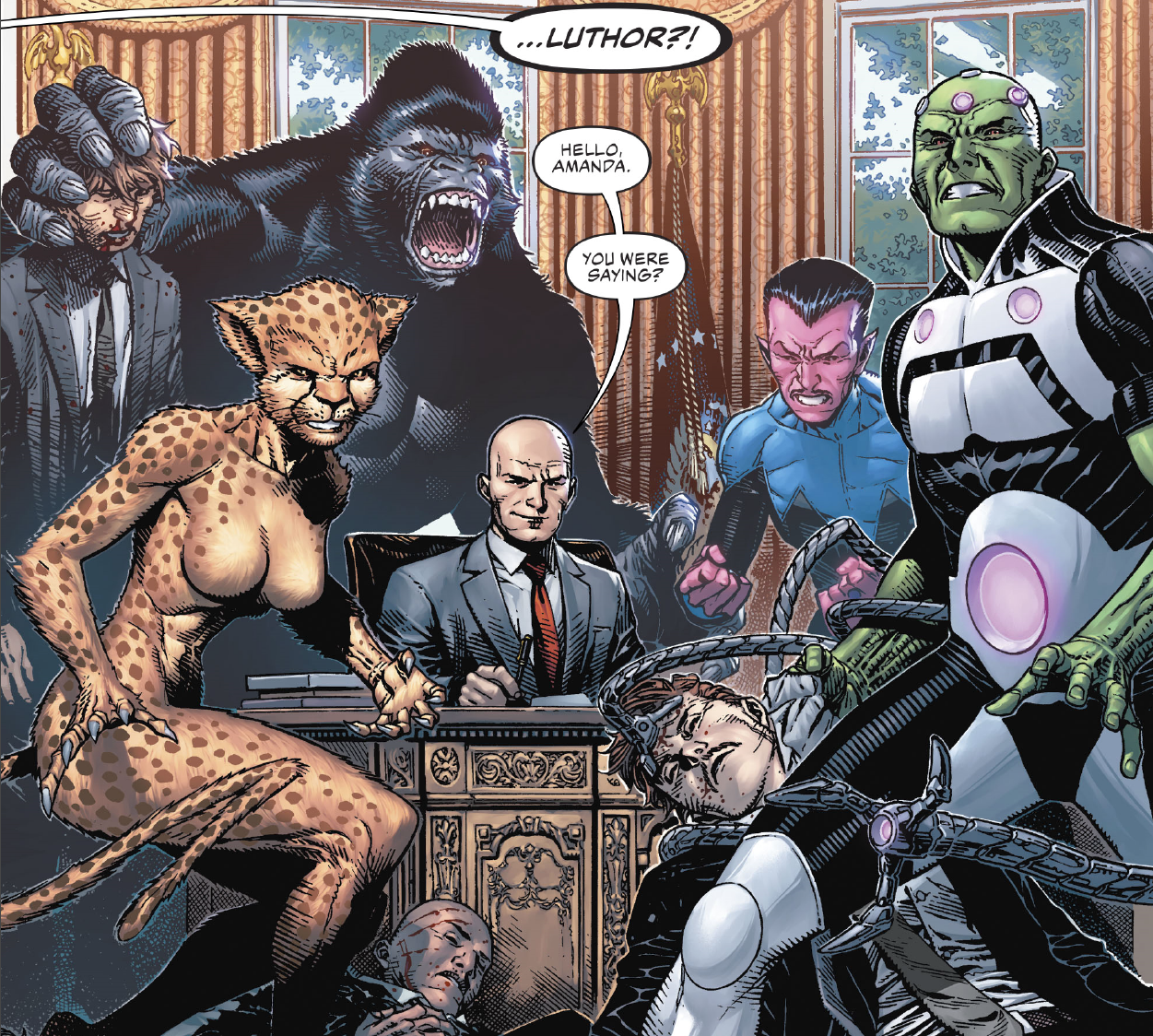 Lex Luthor has been undergoing a transformative process at DC lately — when Superman died (long story), it was about him stepping in to fill the gap as a hero. But the fabric of the DC cosmic itself coming apart at the seams in the wake of events like Metal has pushed Luthor back into a place of familiar villainy, leading to the creation of the Legion of Doom for the very first time in the comics (Superfriends gave us the Legion, of course, but it’s taken until now to transpose the team itself to comic canon).

Year of the Villain Special marks the coming together of all these plot arcs as they have been playing out in the pages of the ongoing Justice League comics. But it also sets the stage for how other major events elsewhere in DC’s books will tie into the dramatic proceedings.

Most notably Leviathan, a sinister new presence Brian Michael Bendis has been quietly teasing in his Superman storytelling, but also Bane’s reckoning against Batman—an arc that has been simmering in the background of Tom King’s Batman run and explosively twisted into the foreground with that infamous Not-Quite-a-Wedding in Batman #50. So where does Lex find himself in all this? Well here’s the thing: he is and he isn’t at the heart of what Year of the Villain kicks off. He is, in that he finally reveals his plan to the world—starting with a brazen attack on the White House to grab the attention of the remaining superheroes on Earth (the main hitters of the Justice League are still off on the universe’s edge, trying to save planet after planet as the breaking of the Source Wall continues to eat away at existence.

Did I mention this saga was a whole dang lot?), before revealing to Brainiac the master stratagem he’s about to unleash: the might of his own rather significant financial assets.

Lex unveils that he has sent a message to the supervillains of Earth — his money, his technology, his research, his genius, all of it is now available to them so they can strike back at their archnemeses and rise at last as victors over the heroes of the world. But then he does something completely out of left field: when Captain Atom and a host of armed forces come to arrest him…he kills himself, blasting the top floors of LexCorp’s HQ with a fiery explosion. With his plan underway and his assets dissolved, Lex Luthor as we knew him is no more. 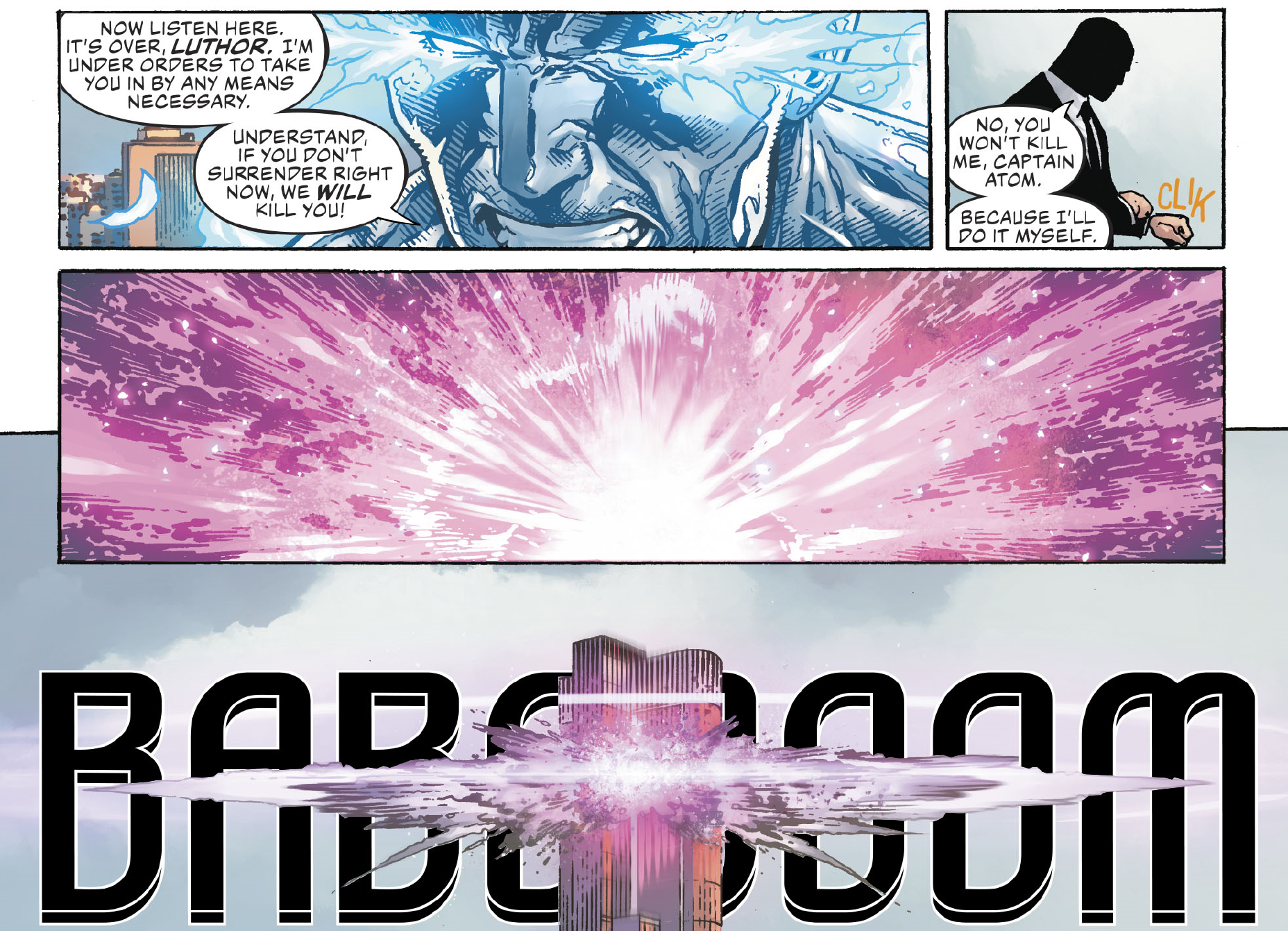 But that’s not to say that Lex Luthor is dead dead. I mean, c’mon. It’s comic books. But the Lex that will move forward as part of Year of the Villain is not the same man we’ve seen plotting and planning for the best part of a year in DC’s comics. The one we meet in the final pages of Year of the Villain Special has been born for this moment.

What set Lex’s death and rebirth in motion is another thread that’s been lurking in the pages of Justice League in recent months: Perpetua, the ancient cosmic entity and apparent “mother” of the DC multiverse who had been imprisoned in the Source Wall until its destruction last year. Perpetua had, eons ago, been imprisoned for trying to fashion the prior multiverse into a cosmic weapon she could wield in a quest to dominate the wider omniverse—a sheer, unfathomable cosmic threat neither heroes nor villains are equipped to deal with.

But it was something that Luthor saw, so he decided to commit himself to Perpetua’s cause in the pages of Justice League, which is the real secret reason he’s given the villains of Earth access to his vast resources. 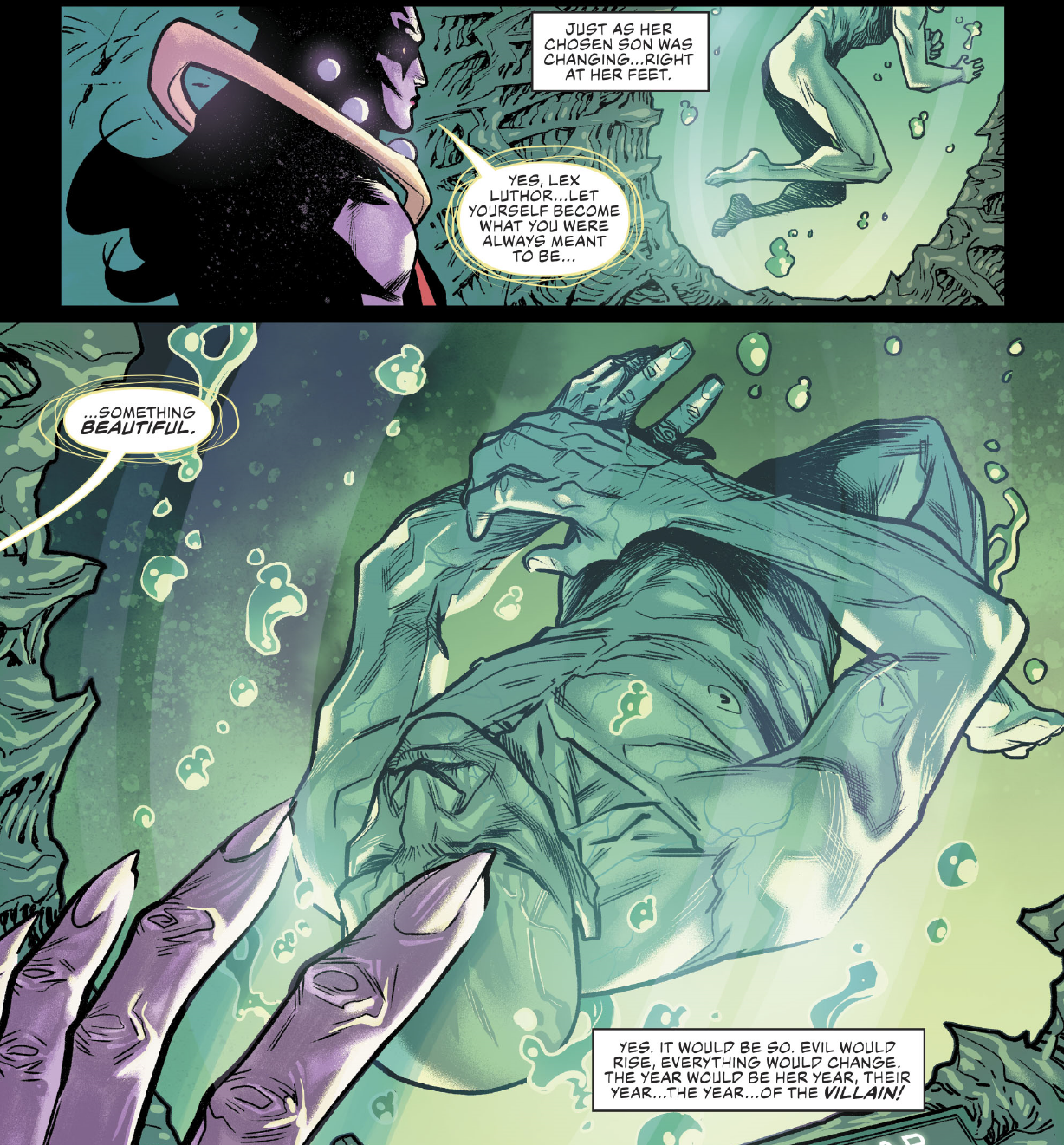 What Perpetua wants is all-out war between Justice and Injustice. A cataclysmic quarrel that will not just level the playing field of people who could stop her from consuming the multiverse but act as a distraction—so the universe could fall apart piece by piece, like it’s been doing even with the Justice League’s attempts to staunch the intergalactic bleeding. It would restore her power so she can craft a new existence in her own image, one where Lex Luthor, her chosen vessel, will take a new form as seemingly one of the most powerful entities in existence.

It’s a wild move in what has been an equally wild game of chess across DC’s biggest superhero comics. Year of the Villain has had a build up quite unlike anything else the publisher has set the stage for in this Rebirth-era of comics—and while this week’s events are far from either the beginning or the end of it, the chance to hop on board at a lower barrier-of-entry with a special like this is one people should be taking.