I’ve spent the past couple of months typing on each of Cooler Master’s three new low-profile keyboards: the full-size SK650, the tenkeyless (lacking a number pad) SK630, and the company’s most recent release, the tiny SK621.

To be honest, the low-profile mechanical switches weren’t what originally attracted me to the series. I was intrigued by the SK621, one of the first 60 per cent keyboards I’ve seen released by a major gaming hardware manufacturer.

A 60 per cent board strips away the number pad and tucks the top function keys away as sub-functions of the number row at the top. Some 60 per cent layouts do away with arrow keys entirely. The SK621 integrates them into the bottom right. It’s a lovely, compact layout, economical without making gaming tricky.

The lighting on the boards, controlled from the keyboard or via software, is very nice.

Like its taller cousin, the MX Low Profile Red switches are linear, meaning there is no mechanical click or bump when they are pressed, just the clack of the switch bottoming out. Both require the same amount of force to actuate, so they feel similar when depressed.

That’s not a huge difference. Where the Cooler Master keyboard is outfitted with higher-profile keycaps, many would be hard-pressed (hahahaha) to tell them apart.

Instead, Cooler Master dressed its low-profile keyboards with these weird little flat keycaps. I like the feel of them, though the material has gotten too friendly with the oil in my skin and developed a bit of shine. 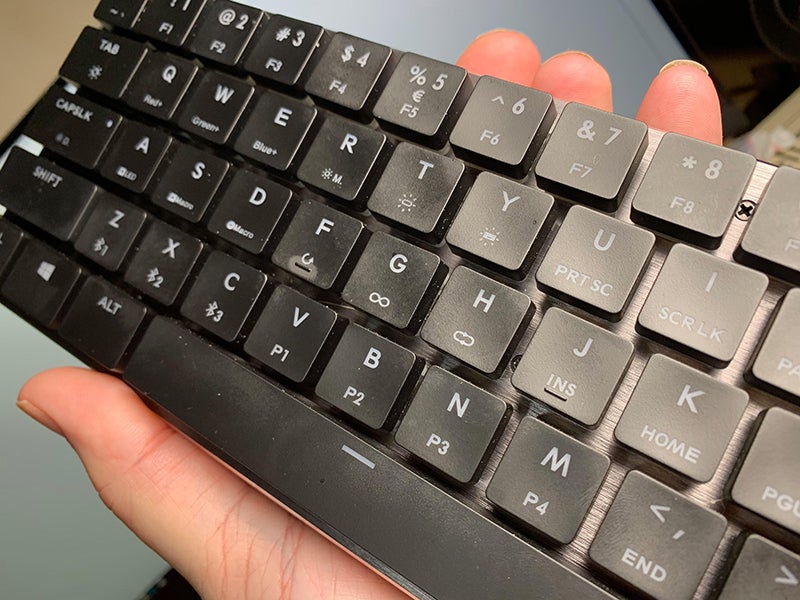 As for typing on the Cooler Master models, the SK621 in particular, seldom has using something so flat felt so good. The bottoming-out sound is nice; the linear action is smooth. YouTube user Goatube posted a video of typing on the SK630 that gives a pretty good idea of what the action is like across all three boards.

I’ve only been more satisfied with one other low-profile mechanical keyboard, the Hexgears X-1 from the Kono Store. I am not a huge fan of linear switches since I prefer the thunk of tactile models or the crispness of clicky switches.

I have a Hexgears X-1 with clicky Kaihua Choc white switches, and it will always be my first low-profile love.

I’m not saying low-profile mechanical keyboards are going to displace bigger, bulkier numbers any time soon. I will always go back to my large metal monsters in a pinch.

But if I am heading to a convention, a show, or a coffee shop and need something more than a basic laptop keyboard, something slim and sleek like Cooler Master’s SK621 has a good chance of making it into my backpack.