More Than A Decade Ago, Checkmate Gave Readers A Brilliant Fusion Of Politics And Superheroes

In most mainstream superhero fiction, the United States of America has superheroes. Lots of them. When France, England, China, and other countries also have their own metahumans, things can get…tense. Over the decades, many comics projects have explored what it might look like for powerful nations and superpowered people to secretly work with and against each other, but the best in the metahuman-meets-superspy genre was DC Comics’ 2006 series Checkmate.

The original iteration of Checkmate was co-created by Paul Kupperberg and Steve Erwin in the late 1980s. Checkmate originally debuted as a secret spy agency under the aegis of Task Force X, the clandestine paramilitary division run by political operator Amanda Waller. (Task Force X has also been used as another moniker for the Suicide Squad—which Waller staffs with dragooned supervillains—but Checkmate tends to lean mostly on non-powered human agents.)

The first series portrayed Checkmate as mostly an American concern but showed that the organisation also had a Russian counterpart. Edited by Joan Hilty, the 2006 Checkmate series was much more international in scope. 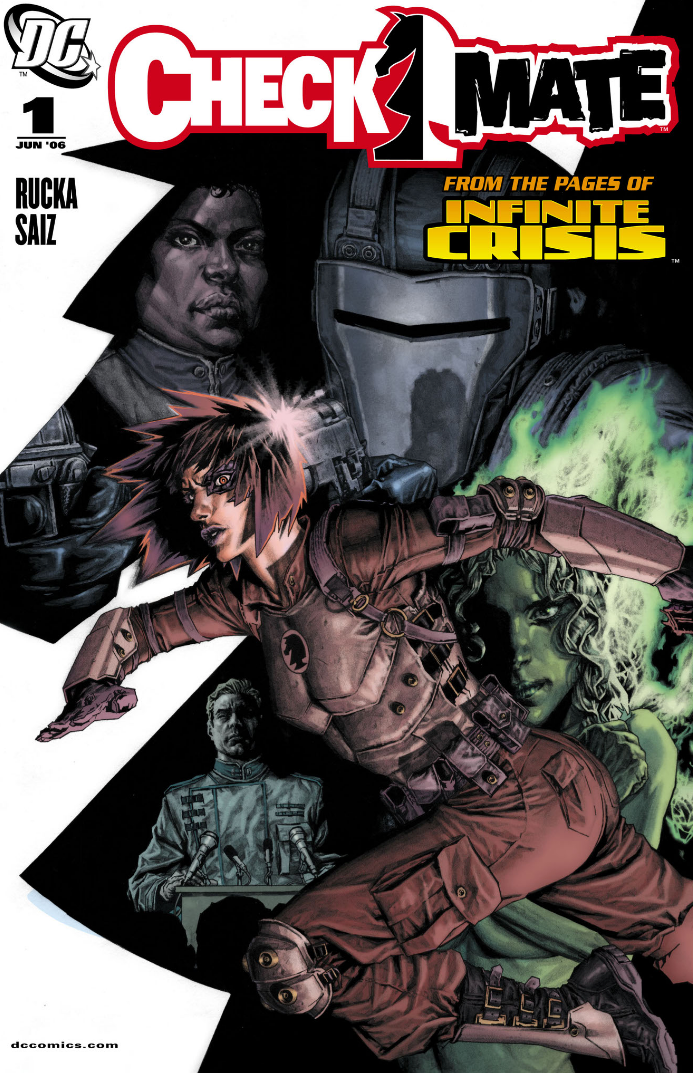 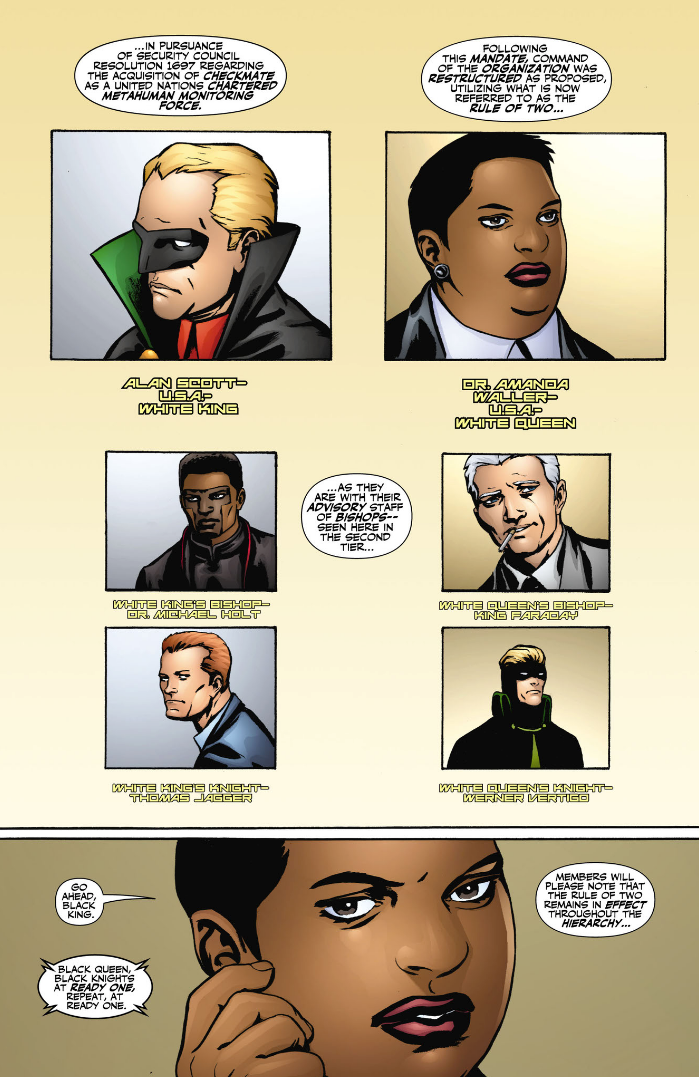 In the 2006 series, a mix of established human diplomats, superheroes, supervillains, and power brokers from all over the globe made up the royal court, deploying pawns and deputizing top-tier characters like Superman. The deputized guest stars often weren’t happy about being pulled in to help achieve mission objectives either, but Checkmate’s ethos was all about colliding ruthless realpolitik and superhero ethics into each other.

That ethos is in evidence from the very start. The first story arc had Alan Scott—the Green Lantern of the WWII-era Golden Age—and Amanda Waller as White King and White Queen, and using these two characters as foils to each other is a subtle stroke of genius. Rucka writes Waller as delectably machiavellian as ever but, in Checkmate, she’s not the sole alpha character. 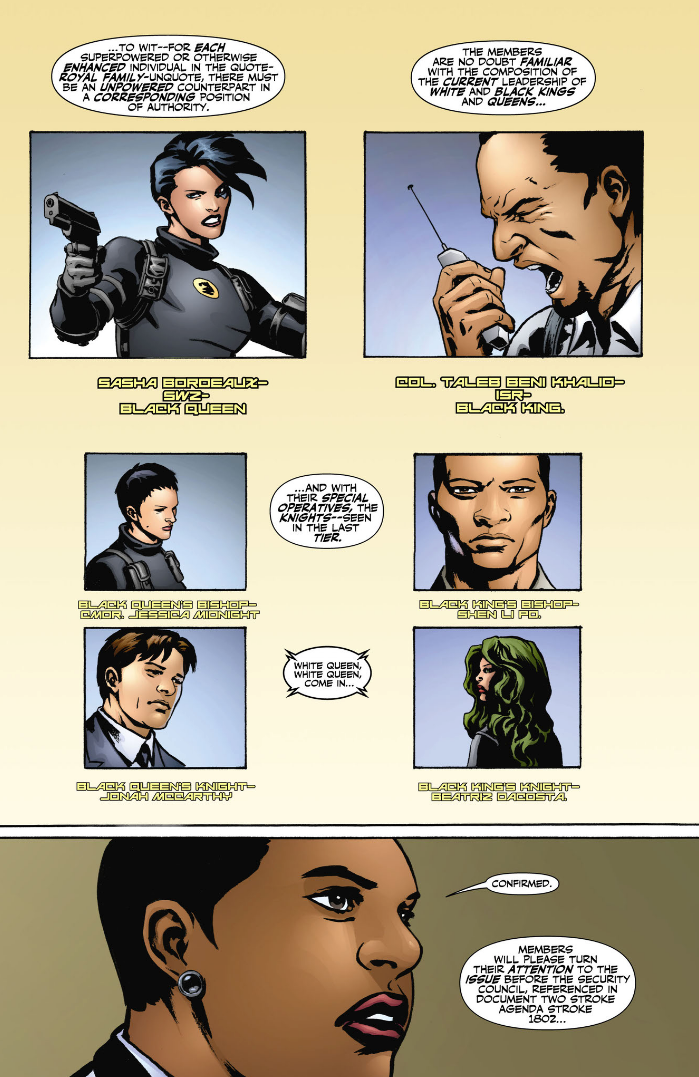 In Suicide Squad stories, Waller typically cows or outmaneuvers the majority of the other players. But Checkmate sees her having to modulate her shady amorality to hold onto a position where she doesn’t have carte blanche. The conclusion of the initial storyline sees Alan Scott leaving his role as White King and nominating super-genius adventurer Michael Holt/Mr. Terrific as his replacement.

Green Lantern passing the baton to Mr. Terrific showcases how the interconnectedness of the pre-New 52 DC universe was one of its greatest strengths. It’s not just one teammate trusting another with a high-stakes position. It’s a tacit acknowledgment that times change and, while Alan Scott and Michael Holt believe in the same ideals, the super-scientist hero will probably be better equipped to uphold them in a cannier way. 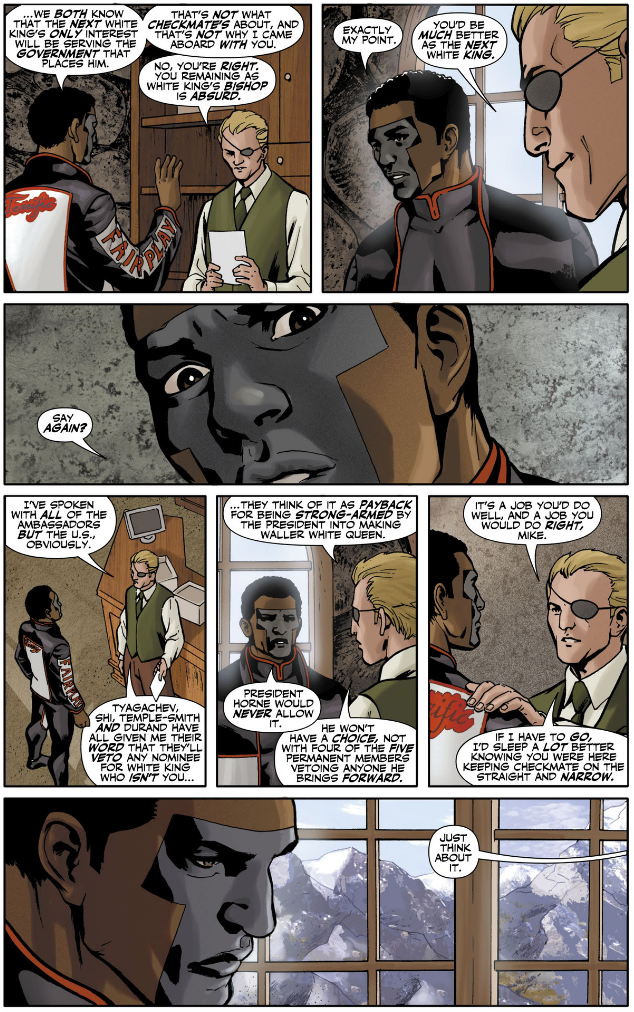 The structure of the rebuilt Checkmate acknowledges political realities, like the fact that major global powers perform public parleys along diplomatic channels while also spying on each other in secret. Trying to safeguard the world while also navigating geopolitical oneupmanship created a slippery slope for all of Checkmate’s characters to navigate. Going back to Checkmate 13 years after the second volume debuted, conceptual rigour and ideological tension still stand out as the series’ signature elements.

Sometimes, episodic storytelling projects figure out their core ethos as they go along, but readers could tell right away that the creative team knew what it wanted Checkmate to be. It had the granular texture of a procedural, where the processes, jargon, and specificity of a specialised profession come into sharp focus. It had the tumult of a soap opera, complete with hidden agendas, underhanded schemes, surprising alliances, and secret romances. Checkmate also tugged on the connective tissue of the DC universe’s history meaningfully, using obscure characters and disparate factions in intriguing ways, as well as creating legacies where none had existed before.

A two-part story in issues #21 and #22 is the best example of that legacy-crafting. Rucka reimagines forgotten 1960s war-comic heroine Mademoiselle Marie as an identity used by female spies and assassins who worked in secret to ensure justice and stability in France. Starting in the 18th century with the French Revolution and moving through to the present, this retcon evolves a single character into a heroic legacy that deftly fits in both the past and present. 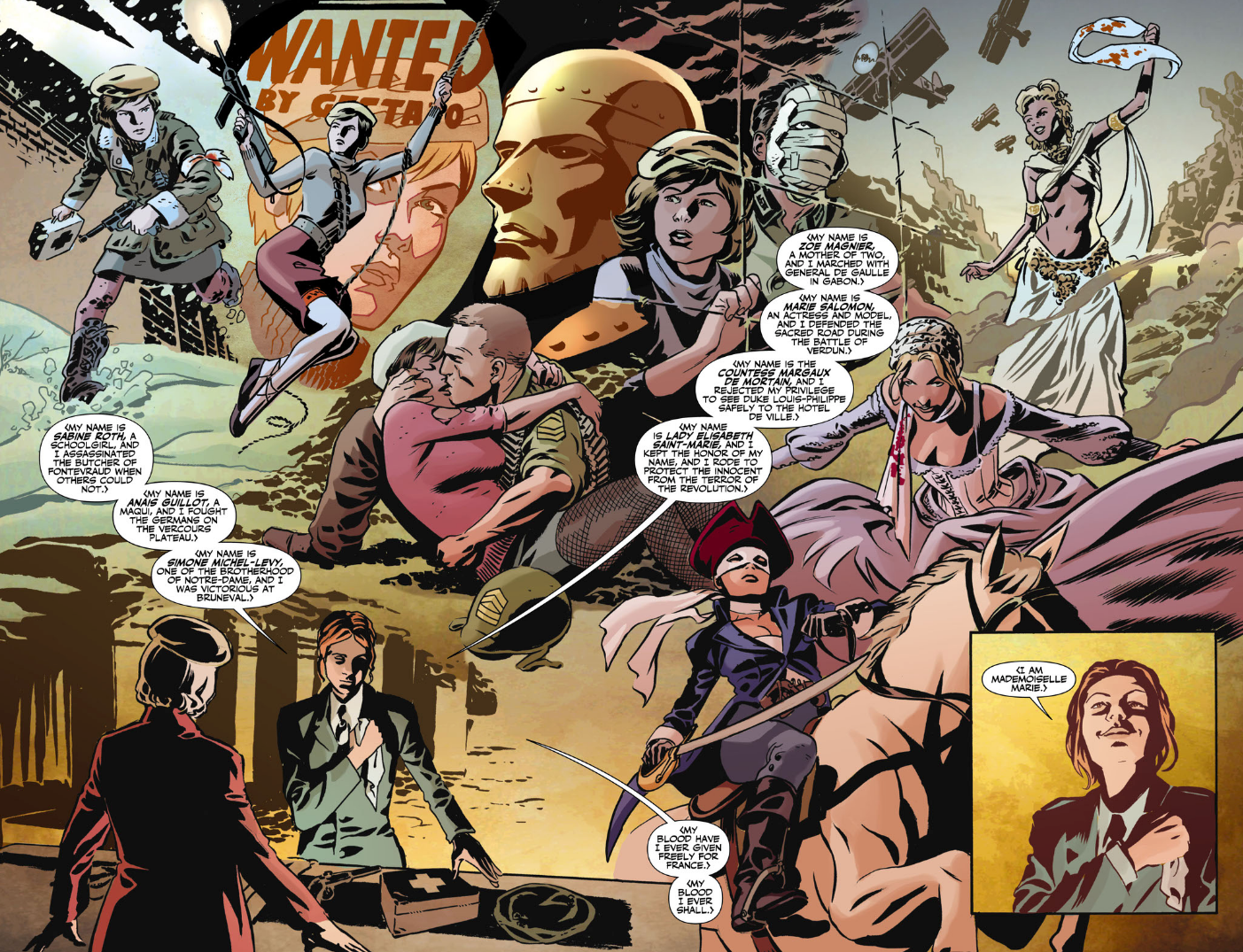 Rucka shared a co-writing credit with Eric Trautmann later in his tenure on Checkmate, and the pair worked with a talented roster of artists who rendered the paramilitary detail, emotional churn, and close-quarters tension with aplomb. It’s fun to go back and see future stars like Joe Bennett, Chris Samnee, and Jesus Saiz honing their chops on close-quarters combat and widescreen superheroics in these pages. You can see strains of post-Watchmen deconstructionism in Checkmate, but the title was less concerned with dissecting idealised archetypes. Instead, the series focused on delivering a survey of the international intelligence landscape that felt like it was drawing on the real world.

Checkmate’s main nemesis was Kobra, the snake-themed terrorist cult that followed a villain who first appeared in the 1970s. Kobra cultists felt creepier than ever in the 2006 Checkmate, with rhetoric that felt uncomfortably close to the kind of extremism that cares nothing about taking innocent life. However, board meetings, negotiations, and workplace politics were as exciting and integral to the story’s formula as the action sequences. The cross-division rivalries and brinksmanship in the series often felt more compelling than Kobra battles, because they highlighted the differences in how fictional government divisions executed their mandates.

Early on, a run-in with an off-book version of the Suicide Squad nodded at the other ways the United States government in the DC universe uses superhumans, and the disastrous consequences of poor oversight and cynical stewardship. That idea would carry over into later storylines, like the “Pawn 502” arc that centered on a Checkmate operation to infiltrate Kobra with an undercover agent. When the op gets intruded on by rivals from the Department of Metahuman Affairs, lots of headbutting ensues. When Bordeaux argues with DMA head honcho Sarge Steel, it’s an illuminating moment that made Checkmate and the DMA feel like more than just clones of each other. 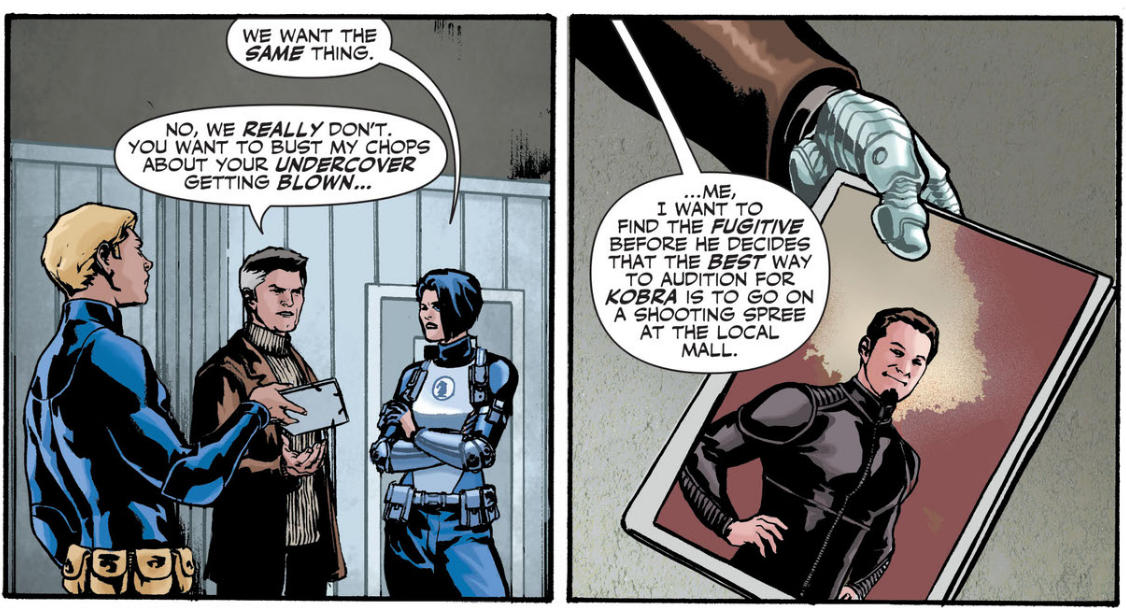 Rucka and company used Michael Holt and Sasha Bordeaux as the series’ lead characters—and had them in a much more mature and healthy romance—which let Checkmate simultaneously draw on different philosophical reservoirs. Holt’s membership in the Justice Society of America meant he was always trying to balance Checkmate’s methods with a morally upright ethos. And Bordeaux’s past with the Dark Knight meant that the dysfunctional complications of the Batman family—including the “CheckOut” crossover with a rowdy, beloved version of the Outsiders, then led by Nightwing—were never too far away. For readers knew about their tortured romantic past, her reunion with Bruce Wayne in “CheckOut” hit like a ton of bricks. 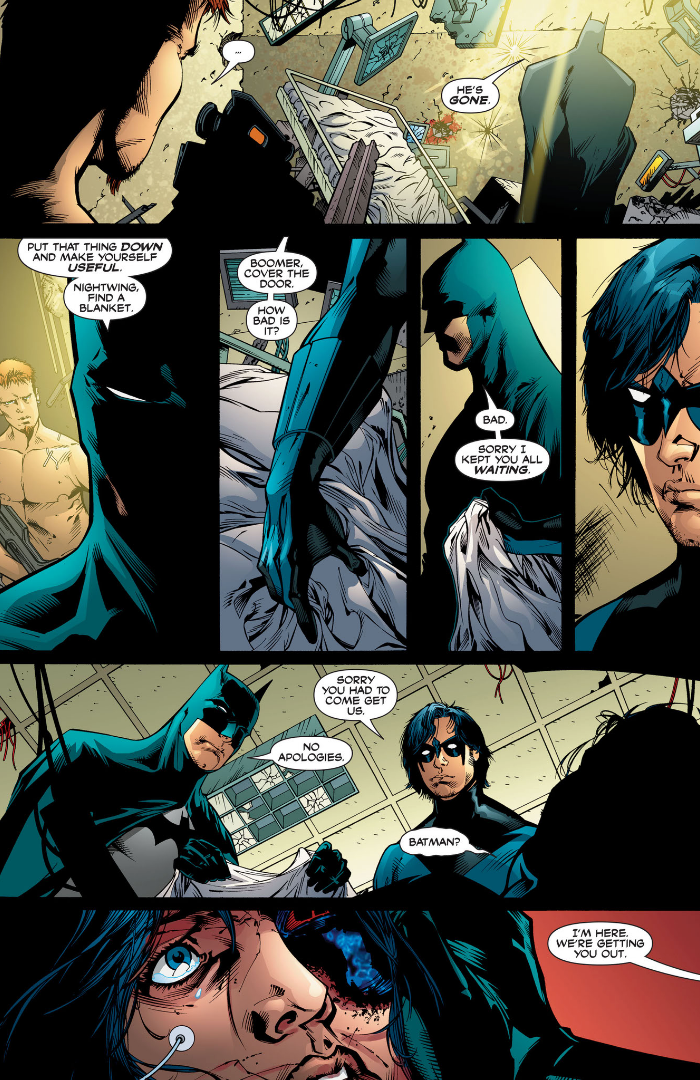 When Checkmate and the Outsiders teamed up, Batman finds out that Sasha Bordeaux had been horribly tortured. 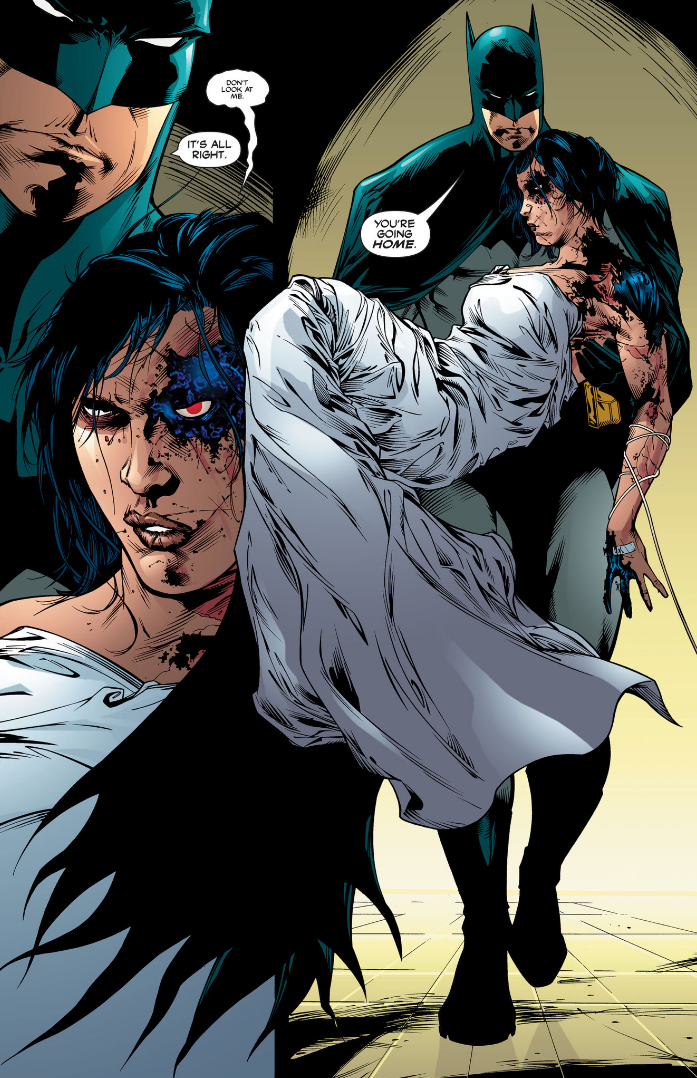 Batman carries the woman who broke his heart to safety.

If Checkmate had any consistent thematic throughline, it was looking at the right way to do a difficult, dirty job. A greatest-generation superhero like Alan Scott wanted as little killing as possible on Checkmate ops, whereas Amanda Waller believed that the only “right way” to execute a mission was to do whatever got the job done, ethics be damned. 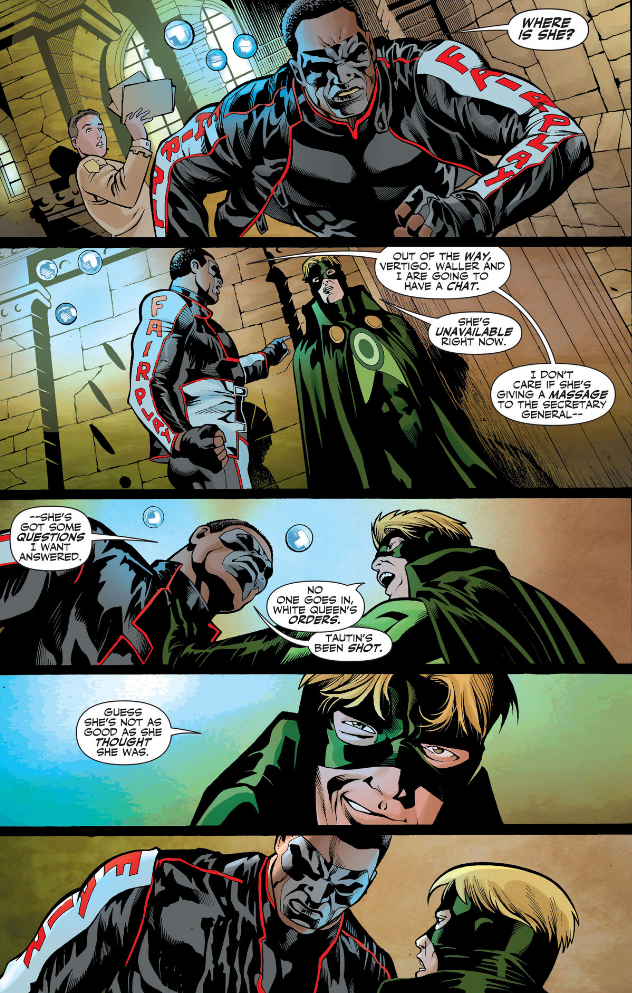 Waller also prioritised the American political agenda however she could and that created more conflict inside Checkmate’s Swiss castle HQ and beyond its walls. “The Fall of the Wall” arc dealt with the effort to end Waller’s dirty tricks, which included illegal abductions and unauthorised black-ops missions. 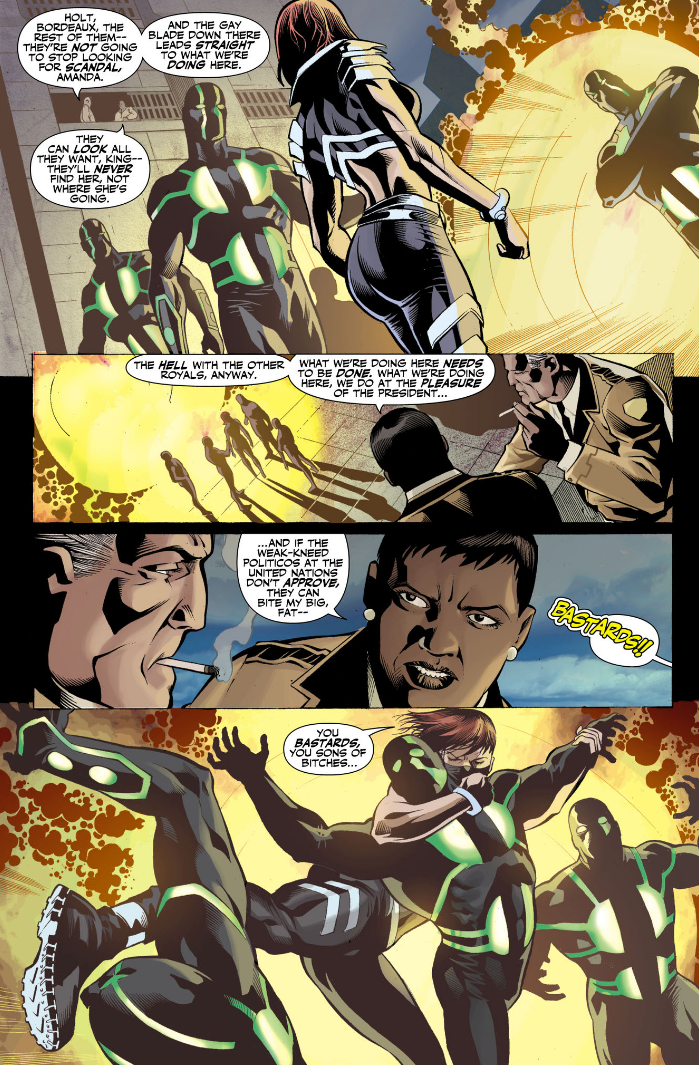 As I re-read the entire 31-issue run, I was shocked by an abrupt shift in creative teams after issue #25. I remember reading the last Rucka storyline but had no memory of the issues that followed. After writer Bruce Jones took over the series, Checkmate became more of a backdrop or framework for stories about new characters. The interpersonal drama of the established cast fell away, as did the geopolitical concerns.

The post-Rucka era of the 2006 Checkmate series didn’t feel connected to anything in the preceding 25 issues and only barely touched on the larger DC universe. I don’t know anything about why the creative change happened but, if I had to wager a guess, office politics inside DC editorial were very likely a reason. Given the series’ overarching themes, there’s a deep irony if that’s true.

If you want to read Checkmate 2006, it’s available as part of the digital comics library on Warner Bros.’ DC Universe service.