league of legendsriot gameswalkout
Facebook may have decided that you shouldn’t see the news, but we think you deserve to be in the know with Kotaku Australia’s reporting. To sign up for our daily newsletter covering the latest news, features and reviews, head HERE. For a running feed of all our stories, follow us on Twitter HERE. Or you can bookmark the Kotaku Australia homepage to visit whenever you need a news fix.

Over 150 discontented Riot Games employees walked out of the League of Legends publisher’s offices in Los Angeles today to protest the company’s stance on forced arbitration. Standing in a parking lot on Riot’s campus, employees held picket signs and gave impassioned speeches.

“We’re asking that forced arbitration be ended for all past, current, and future Riot employees, including contractors and in current litigation,” said Jocelyn Monahan, a social listening strategist at Riot, in an interview with Kotaku. Standing in front of a sign reading “Rioters Unplugged,” a play on Riot’s internal “Riot Unplugged” meetings, Monahan would later tell her assembled colleagues through a megaphone, “asking to feel safe does not make you entitled.”

Monahan had one major point she hoped to get across to her colleagues—even those who chose to stay in their desks and continue working. “We are what makes Riot great. I want us to feel solidarity and connection with each other. I want us to feel connected. I want us to feel like our voices are heard and heard in a way that matters.” Colleagues took turns speaking through the megaphone, with several admitting that they were scared to participate and be labelled “anti-Riot.” Said one, “I was worried. I was like, ‘What if I go and nobody shows up?’ I’m a little less worried about that now.” Others are showing their support with the #riotwalkout hashtag, which hundreds have been tweeting.

Today’s protest appears to be the first labour-related walkout for a large game studio like Riot. The company’s management is allowing its employees to participate and has urged managers to be accommodating and understanding. In an email to Kotaku this morning, a Riot representative added, “We respect Rioters who choose to walkout today and will not tolerate retaliation of any kind as a result of participating (or not).” 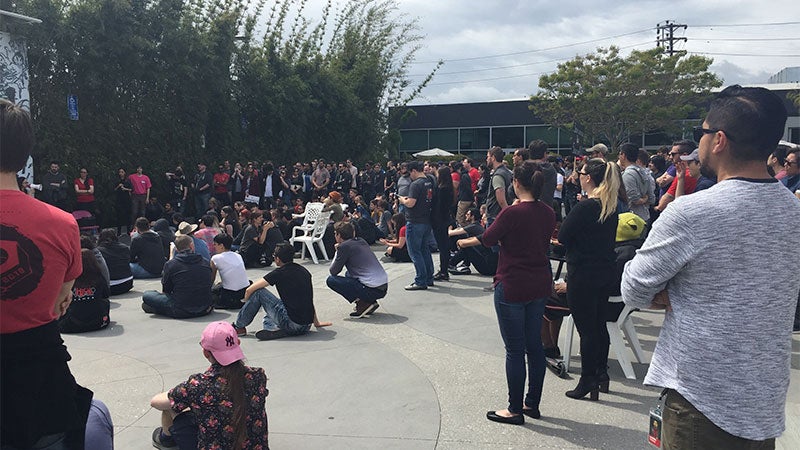 In the months since Kotaku’s investigation uncovering endemic sexism at Riot Games, five current or former employees sued the company, in part, for violating California’s Equal Pay Act. Last week, Riot filed a motion to force two of those current employees into arbitration, an extralegal forum where a suit does not go in front of a jury. Recently, 20,000 Google employees walked out to end forced arbitration; months later, Google announced it would comply, but only for harassment cases. Last week, Riot announced it would now allow incoming employees to opt out of forced arbitration for harassment suits and would consider extending that to current employees “as soon as current litigation is resolved.”

Giving a speech, one current Riot employee announced she was quitting in two weeks. “I’m quitting because I don’t want to see people who were protected by people in high places in Riot,” the employee said. Two higher-up employees at Riot Games, including the COO, have been retained at the company (in the COO’s case, after a two-month unpaid leave) despite several complaints against them to HR and otherwise being accused of everything from gendered promotion strategies to ball-grabbing in Kotaku reports. Adding that she’s worried that she’ll “be labelled a red flag,” she continued, “I don’t even spend time with my husband who works here, because I worry that he’ll also be labelled.”

Nearly half a dozen in attendance said that while they rarely talk in Slack or meetings, they felt compelled to publicly express concerns about Riot’s culture today. 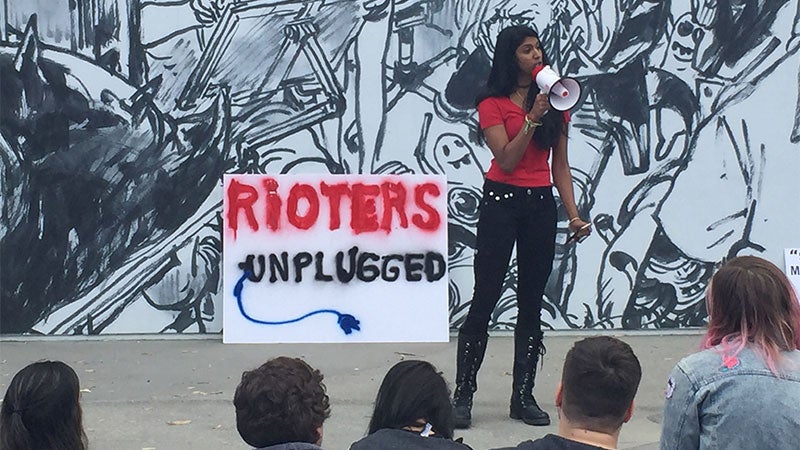 A Riot employee speaking to her colleagues through a megaphone (Image: Nathan Grayson)

Signs at the protest read, “It shouldn’t take all this to do the right thing,” “Be the company you say you are,” and “Silence one of us, you silence us all.” In a Kotaku report earlier today, employees expressed several reasons they would participate. While several are attending specifically to show support for the two plaintiffs in suits against Riot, others were frustrated that eight months after Kotaku’s investigation, they have not seen concrete signs that Riot is dismantling its sexist culture. Said one, “So far I haven’t seen a single outcome of our diversity and inclusion efforts at Riot. I haven’t seen a single metric or number to indicate things have improved and I haven’t seen a single project get finished.”

One other employee, who is male, explained, “While I fully believe Riot is doing everything they can in the moment to end future arbitration, I see value in presenting a nonviolent, unified voice. As someone with a voice, I am lending it to others who feel like they might not have one or be unheard.”

Updated: 6/5/2019, 10:58 AEST: Toward the end of the walkout, Monahan made an announcement saying that if Riot management doesn’t make any sort of commitment on forced arbitration by May 16—the date of the next Riot Unplugged meeting—she and others involved with the walkout will take further action. Another walkout organiser, Riot writer Indu Reddy, was not able to delve into specifics of what that will mean, but she told Kotaku that “we do have plans, and we do have days that we’re planning, and we do have commitments that we have responses for.”

Reddy also said that despite Riot’s statement, retaliation is an ongoing concern. “We might face unforeseen consequences despite leadership’s own commitments, because leadership is one entity, and there are a lot of Rioters throughout the org,” she said. “We will prepare for retaliation. I think it wouldn’t be smart to not plan for it. But we’re not assuming it either because leadership said they wouldn’t retaliate—for this one, anyway. We will continue to ask for confirmation for future demonstrations.”

The mood at the walkout, however, was generally positive. Robin, a Los Angeles chapter organiser for advocacy group Game Workers Unite, expressed hope that today’s walkout will inspire game developers at other companies, too.

“The fact that this action went so well—there were people on the mic, everyone was so excited, there were so many people sharing their stories—I think that’s gonna inspire a lot of other people at companies to realise they have a lot of power over the conditions at their workplaces,” Robin told Kotaku. “This is going to be a tremendous example for people to know that they can make their conditions better.”