NBA Star Says ‘80%’ Of Players Are Into Anime

It’s easy to get caught up in rosy nostalgia when talking about long-lost series from years past, but there’s something to be said for the classics. Remember slamming down snaking neon streets in F-Zero? And who among us (of a highly specific age range) didn’t spend hours of their childhood staring with starry eyes at Star Wars: Rogue Squadron’s movie-like dogfighting antics?

OK, now imagine those games, but with Overwatch heroes flying through the sky. And grunting. A lot.

The Overwatch Workshop, which allows players to break the game open and create custom scripts and rule sets, has inspired players to push the hero shooter far past its limits. That’s resulted in a range of wild ideas, from cheeky things like Roadhog Spider-Man to impassioned mechanical pleas for changes to Mercy.

Some players have even attempted to change Overwatch into different kinds of games altogether. Case in point: the collected works of Ghibliomatic, who’s decided—for reasons I will never be able to discern, but nonetheless must applaud—that everybody needs to be aeroplanes.

Their main focus has been a third-person dogfighting mode that turns a handful of heroes into glowing orb amalgams of unstable, vaguely ship-shaped energy.

To begin, it was just Bastion, but today they updated the mode with Reinhardt, Lucio, and D.Va. Each has access to abilities that it would make sense (in its own sort of way) for a plane or spaceship to have.

For instance, Reinhardt cannot swing his hammer, but he can repeatedly use his long-range fire strike ability. Every time he uses it, he lets out a battle cry of pure exertion, which kind of breaks the illusion that he’s a mechanically engineered aeronautic miracle. But that does feel extremely true to the spirit of Reinhardt, an unhinged hammer-swinging German man who is, somewhat ironically, the least plane-like of all Overwatch heroes.

Ghibliomatic has also added their “planes” to a D.Va racing mode originally created by DarwinStreams, allowing players to soar through a futuristic cityscape in a way that vaguely resembles F-Zero, except without visible tracks.

I’ve tried both the standard dogfighting mode and the racing mode, and while I certainly never expected to be doing either of those things in Overwatch, they’re mad janky in a way that makes them difficult to recommend as anything other than a novelty. Hero planes feel floaty and are subject to some seriously herky-jerky bouts of inertia. I had my best success with D.Va, whose boost ability made her easier to regain control of when she, as an orb plane, started to get away from me.

I also flew all the way to the top of Lijang Tower, which gave me this cool view: 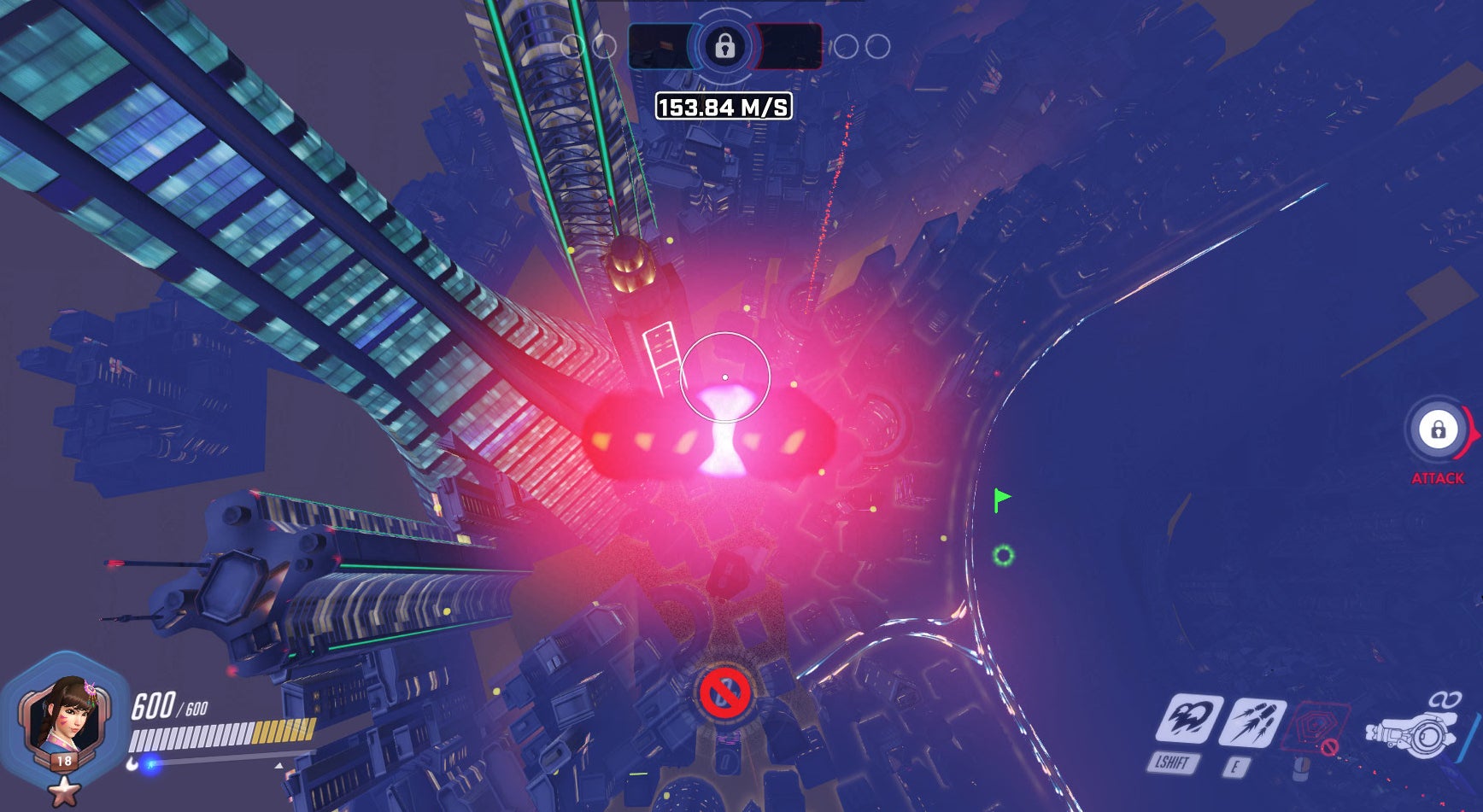 On the whole, it’s a neat idea, if only because it clearly took some serious ingenuity to pull off. Were Overwatch heroes meant to be planes and futuristic race cars? No, definitely not. Do we live in a world where they are anyway? Absolutely. In that sense, perhaps we are luckier than we know.