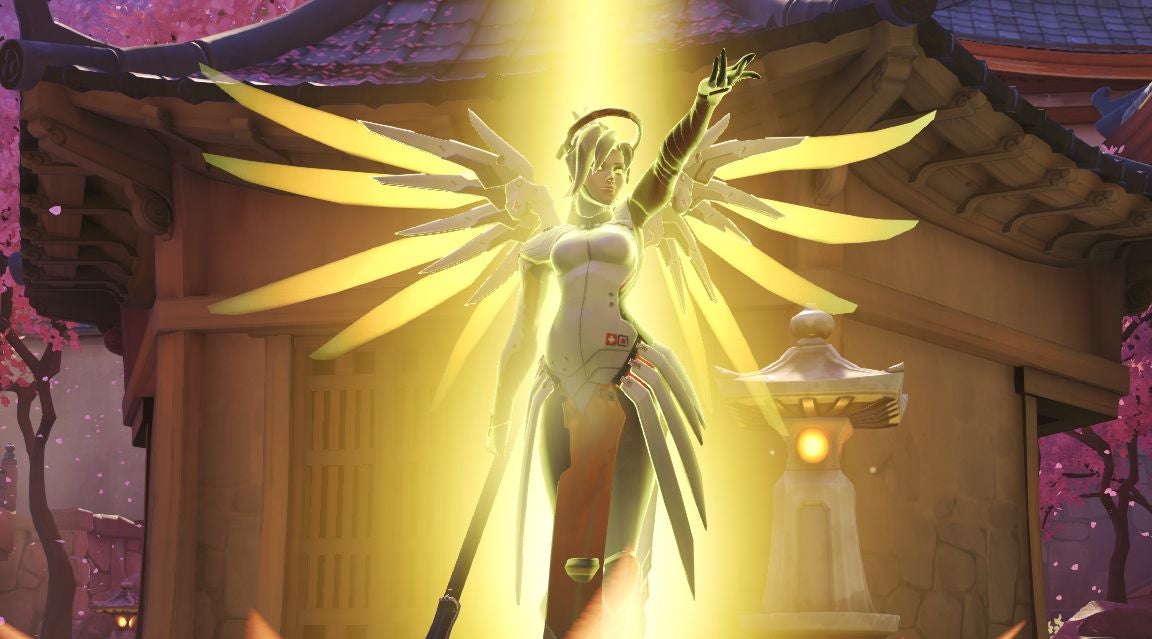 It’s been a long time since Overwatch’s winged flock of Mercy mains were entirely happy with the state of their favourite healer. A series of changes and nerfs had many feeling like she was less exciting to play than she used to be, and she didn’t fare well in the game’s now-waning GOATS meta.

Some players want to revisit the good old days, and now, with the help of Overwatch’s new Workshop tools, they’re doing exactly that.

Talk to different Mercy players and you’ll get a hundred different perspectives on what makes her tick, but many will agree that the biggest turning point came when Blizzard overhauled her ultimate back in 2017, replacing her team-wide resurrection with a more modest “Valkyrie” ultimate that buffs her other abilities and lets her fly.

It was a controversial decision; while some felt that the full-team resurrection was too much of a game-changer, others loved it for its big-moment potential—something Mercy players, with their no-frills heal and buff beams, rarely experience otherwise. With her resurrection ultimate, Mercy was the antithesis of what the esports-adjacent “git gud” crowd wanted to see from Overwatch: a character who didn’t require traditional, reflex-based first-person shooter skills to play, but who could still change the complexion of fights in an instant. Overpowered or not, she required a different kind of skill, one that ended up attracting new players, a larger portion than usual of whom were women.

Disdain from larger portions of Overwatch’s player base and esports scene led to gate-keeping insults and memes and calls for Blizzard to clip Mercy’s wings.

At that point, Blizzard had a choice: balance the game around unique support abilities like Mercy’s mass resurrect, or take a more traditional approach to competitive game balance. The developer chose the latter.

“It’s most definitely been a labour of love.”

They can even tweak heroes to the point that their ability sets are nearly unrecognisable – or, in this case, distantly familiar, like a hug from an old friend. Many players have taken to resurrecting Mercy’s long-mourned resurrection ult.

The chilled three-pack of Zenyattas—thoroughly cracked open seconds earlier—springs back to life in a flash of ethereal light. The ult, in other words, works exactly as advertised. There’s even a functional HUD, and Mercy lifts off the ground while casting to provide more of the oomph you might expect from someone bridging the abyssal gap between this world and the next.

It was not, however, easy to make. The mod’s creator is a longtime Mercy main who goes by the handle RevertMercy, and this is their fifth version.

“A lot of code goes into my builds of Mass Rez,” RevertMercy told Kotaku in an email, noting that they have some basic programming experience. “When you have over 10 individual rules of code all doing their own thing, with even more separate rules and conditions within them, there’s bound to be bugs, so it’s most definitely been a labour of love.”

RevertMercy has gone the extra mile, adding a passive ability called “Clairvoyance” that lets Mercy detect downed heroes in her vicinity while her ult is charged. RevertMercy also has ideas for a separate burst-healing mechanic, as well as better base healing stats and a super jump. For now, though, they’re just playing around with these loftier ideas, as they want to “stay true to her core design.”

A top-500 player and Twitch streamer who goes by the handle HotKibbles made his own Mercy resurrect ultimate with an even more complex set of rules to get around some of the Overwatch Workshop’s limitations. For example, you can’t actually disable a character’s regular ult without disabling the ability to ultimate altogether, so HotKibbles found a workaround: killing Mercy the moment she uses her ult.

“In this version I made, Mercy has to die and get resurrected with the group in order to not trigger her new Valkyrie ultimate,” HotKibbles told Kotaku in an email. He’s also drawing on a number of traditional programming techniques: “I have to set up what’s called a ‘loop’ for many things to keep track of numbers and changing maths equations for it all to work.”

“For example, at all times there’s something running that checks for all allied players within 20 meters of Mercy, and every time it grabs that number it has to filter out the dead players from those numbers into what’s called a ‘variable’ in programming. Then later on, in all this stuff you have to resurrect all the players from that number you saved, then it will resurrect all dead teammates and not affect the alive ones. It’s also necessary for making the rez indicator.”

Another player, Mrinohk, came up with a less, er, dramatic solution to the ultimate problem.

“I have it set so that you can only press Q if your ultimate is at 99 per cent and not let it climb past 99 per cent at all,” Mrinohk told Kotaku in a Reddit DM. “Then I have it resurrect all dead players in a 15 meter radius like old rez did. It took a lot of trial and error to get something that functioned to any reasonable extent, but it works.”

Everybody has their own reasons for pouring so much time and effort into what are ultimately pet projects that will forever be exiled from regular Overwatch modes. RevertMercy wants to show players and Blizzard what Mercy can be if given the chance to really shine.

“I think there’s been a lot of misconceptions and controversy against [mass resurrection] from those who believe that it’s simply ‘too broken of an ability to balance,’” they said. “The only statement I would like to make is a positive and hopefully inspiring one. To show people and Blizzard how a multi-rez ability may actually function in this current meta, as well as show the potential of how great old Mercy can be if it was given the proper tweaks and counter-play.”

“I think there’s been a lot of misconceptions and controversy against [mass resurrection] from those who believe that it’s simply ‘too broken of an ability to balance.’”

Mrinohk’s goals aren’t quite as lofty. They feel like they’ve improved as a player since all the Mercy changes, and they want to see what they can do with classic Mercy now.

“I want a chance to be able to use that tool properly now that I’ve improved as much as I have (mid plat then, now low Masters),” they said. “I want to know what I could get done with the tools she had now that I know better how to use them.”

Unlike some Mercy players, HotKibbles doesn’t actually want to see mass resurrect make a return to the main game. He called Valkyrie “the most fun ability in the game” and said he’d prefer to see Blizzard implement quality-of-life changes to make Mercy more effective. However, his Twitch community is full of Mercy mains, and he witnessed firsthand the “heartbroken sentiment” that gripped people who’d risen through the competitive mode ranks thanks to the way Mercy’s old kit enabled them to play.

“Even if it can’t bring it back for their ranked and arcade games, at least now they can play it again with friends in custom lobbies and show them how good they were at it, or whatever nostalgia they might need and crave,” he said.

He also just wanted to have fun with it, which is why he decided to show off his Mercy ult with a parody of Overwatch director Jeff Kaplan’s developer update videos.

“It felt appropriate, and I thought it was really funny,” he said. “I just wanted to make it for fun, and it was a great first project to learn the Overwatch Workshop code.”

Thanks to the meta winds shifting in a favourable direction and public perception coming along for the ride, all the players I spoke to agreed that Mercy’s in a better place than she has been in a bit. Or at least, people aren’t getting reported for picking her as much. But it’s hard for them not to miss Mercy’s old glory days, when she wasn’t just situationally effective but also exciting to play.

RevertMercy holds out hope that even if Blizzard doesn’t, well, revert Mercy, the Workshop tools can help players light a new, more interesting path forward for the angelic healer.

“This is a start of a new era, and we as a community are no longer are in a time where we would just believe something Joe Schmoe says about a hero because they’re an X rank player, because we have the resources to test things out on our own,” they said. I hope this becomes something we as a community can be more informed about going forward, and perhaps even see that having such an ability make a return in their games might not be such a bad idea … Here’s hoping!”