Player-Run Stores Have Made Fallout 76 A Much Nicer Place 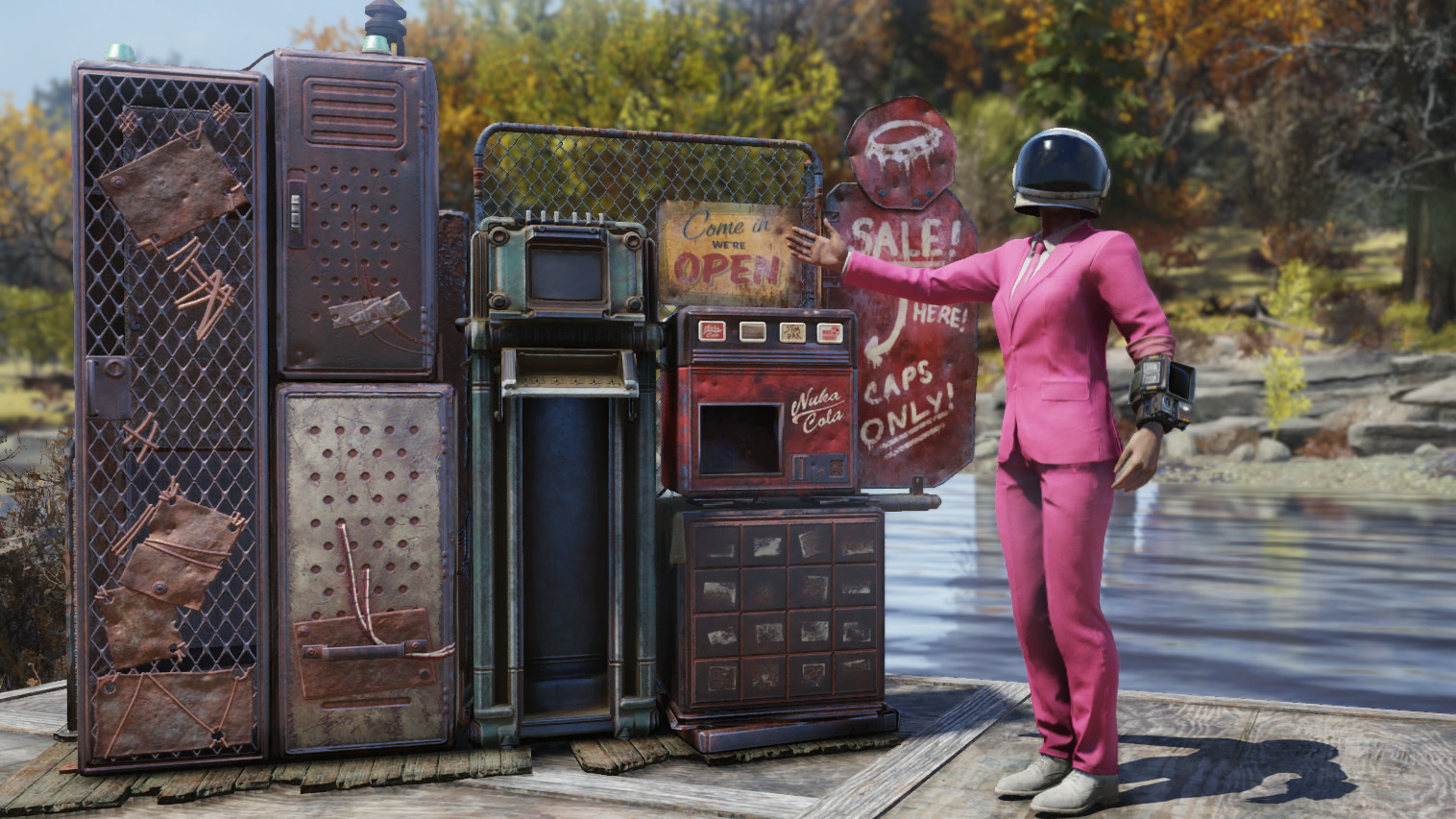 Fallout 76‘s latest patch has come with a number of changes, but the most notable has been vending machines that players can build to sell items to others who visit their bases. By running a wire from a power generator to the vending machine, players are able to turn their store into a fast-travel location that other players can visit by selecting it on the map.

Since then, thousands of players have been laying down their weapons and setting up shop.

One player, NeffTheCloud, even went so far as to post a local TV station-style commercial for the grand opening of Neff’s Supply Co., their new personal player-owned store, in the Fallout 76 community on Reddit last week. They hoped to give bargain deals to lower-level players that would help them progress faster.

It’s the sort of selflessness you’d expect from the sole proprietor of the only bar in a backwater town at the beginning of any other role-playing game.

“This update was the best thing to happen to the game so far,” Neff told Kotaku in a private message. For anyone that forgot about Fallout 76 after its rocky release, it may come as a surprise that the game’s newest patch has been so well-received.

“In order to help more people out, I’ll even leave the game on idle while I wash the dishes, check the mail, or whatever I can get away with,” Neff said.

They’ve begun playing more like an NPC than a player. And that’s great, because as players quickly discovered when Fallout 76 launched without nearly enough of them, role-playing games need NPCs. And since Fallout 76‘s are exclusively of the nuts-and-bolts variety, it needs players willing to supply the human element.

“This update has really given the game a more solid sense of community.”

A player who goes by the PSN handle Enigma_Tim confessed in a Reddit post to turning their own store into a nearly full-time job. “I often want to log on and just idle about,” they said via private message.

“I have a seat I’ve set up for my character so I can hang out at the store and hopefully watch people chuckle or take photos of my store.” Other players are hungry for bargains, and the newness of the system has them constantly hopping around to shop. Sellers are finding that keeping their shelves stocked is almost as demanding as running a real-life store.

Tim’s dedication to customers has netted a number of in-game friend requests. “This update has really given the game a more solid sense of community,” they said. Although Fallout 76 has had a number of updates since it launched last November, this one has a special spark.

At launch, Fallout 76 was lacking in a lot of areas. Players were met with game-crashing bugs, poorly balanced inventory management, and a wasteland devoid of character—non-player characters, that is. The irradiated West Virginia has a wealth of personable robots, like the Mr. Handy named Jack O’Lantern who lives in a house overrun with pumpkins. But the only evidence of other humans are voice-recording holotapes left as breadcrumbs for quests.

Inevitably, the character on the other end of the pre-recorded messages is found dead as the increasingly predictable tragic twist. Somehow, not a single human soul could be found in the wasteland.

The Fallout series’ finest moments have always been unlikely interactions with wacky characters, a personal favourite of mine being the ability to have revenge sex with a gangster named Benny who attempted to kill me in Fallout: New Vegas, before returning the favour and the bullet.

Fallout 76 has none of the same wild charm. Other players were meant to instigate fun encounters amongst themselves, and Fallout 76‘s pre-launch marketing leaned heavily on the implication that player-vs.-player interactions would be the primary source of entertainment.

Players built impressive bases with an eye for efficiency, defensibility, and artistry, but there was seldom ever anyone to appreciate them. Players had little reason to stumble across one another’s homes and even less inclination to stop for a chat. Many players would keep the in-game voice chat turned off entirely, relying on character emote animations like “thumbs up” and “help me” to communicate.

According to Tim and Neff, that’s changed since last week’s update. “Usually, with every update I just grind the content until I get bored,” Neff said. “Now, with the vendor update, I have a lot of reasons to log on. I’m excited to see who’s gonna stop by.” Neff and Tim both make sure to log on to open their shops for business.

With their vending machines powered and visible on the map for other players to fast-travel to, there’s always a curious customer stopping by.

Since I returned to Fallout 76 last week along with so many other players, I’ve noticed the same change. I travelled to a number of player stores, more to see their bases than to shop. At one, two players over level 100 offered my level 30 character free drinks and a legendary shotgun that was perfect for my level.

They chattered on without urgency, following me around as I explored the clifftop base and happily accepting my friendly “heart” emote in lieu of turning my microphone on.

They were the quirky element of surprise that Fallout 76 had been missing: two chatty locals at a remote rest stop. They were my NPCs and I was theirs. Neff and Tim have done much the same, idling in their cleverly-named stores just waiting for eager players to come along to chat with. They, too, are the NPCs that Fallout 76 deserved from the start, whether they intended to be or not.

All over the wasteland, on every platform, players are gathering to chat and entertain one another like they never have before. “The customers just stayed around for an hour or so hanging out,” Neff said of Neff’s Supply Co.’s grand opening event. “They were trading, playing instruments, and even having mutual PVP matches outside. It was a lot of fun, and I’d like to set up something else like that again.”