Rage 2 is caught between Good Stupid and Bad Stupid. In the end, Bad Stupid wins out.

Rage 2 takes place on a dystopian, desert Earth that was struck by a meteor over a century ago. Much of the population has been wiped out, and civilisation is a shadow of its former self. In the first Rage, you were a survivor, put in cryogenesis in a futuristic building called an Ark before the meteor hit, and you woke up in order to defeat the fascist Authority bent on taking over what was left of humanity.

In Rage 2, the Authority is back, and now you’re a new character named Walker who has to take them down after they killed Walker’s adoptive mother and destroyed their home.

Walker, who can be male or female, is a Ranger. Rangers wear armour that basically gives them super powers, and they can use extra-powerful weapons. You find new weapons and powers as you visit Arks across the world. I was eager to find those powers and weapons, but in the end they were a little lacklustre. The first power, Dash, lets you dash, but I didn’t use it much.

The second power, Shatter, is a concussive blast that can tear the armour off enemies and also explode them. I used it a little more, but by the end of the game I forgot it existed. Getting a double jump was useful, but I could also climb pretty much anywhere. I also barely used my fourth power, Slam, which let you slam to the ground and knock out enemies. There were more powers I could unlock, but I didn’t end up looking for them. They didn’t feel worth seeking out.

It isn’t that using these powers isn’t fun. It’s exceptionally fun to explode a man through his armour with my fist. It’s just that more often than not, the easiest and fastest way to get out of a jam is to shoot something until it’s dead.

That wouldn’t be an issue if shooting things until they’re dead wasn’t so dull. You end up with very cool weapons if you visit Arks: I remember when I found the Spitfire Revolver, a gun that sets people on fire. The first time I set someone on fire with my revolver, it was like I had been given a shot of adrenaline to the heart. After sticking to my trusty assault rifle and shotgun for much of the beginning hours of the game, I was ready for things to get Good Stupid.

Rage 2 convinced me it would be Good Stupid during E3 last year, when Bethesda brought out Andrew WK to play “Ready To Die.” Andrew WK is Good Stupid, like early twenties bad decisions you talk about years later or “doing it for the Vine.”

His music is unrelentingly positive, urging the listener to go out in search of the unpredictable, violent beauty of life. When I found the gun that sets people on fire, I thought I’d also found where Rage 2 was hiding its Good Stupid.

When you come out of an Ark, after a quick tutorial on the new weapon or power you’ve gained, you’re greeted by a host of enemies to try your new thing out on. With the Spitfire Revolver in hand, I shot some guys, and then lit them on fire by hitting the button you’d normally use to look down the sights. It was hilarious, until I realised that the gun wasn’t taking enemies out as quickly as I needed. I switched to my shotgun, but it was too late. I was swarmed, and I died.

I figured I’d just try again, building on what I’d learned. That time, I lasted longer in the firefight but died again. I tried to come out on top two more times using the Spitfire Revolver, but each time I was overtaken by enemies and died.

Reluctantly, I switched to the assault rifle and took down the crowd easily. I never took out the gun that sets people on fire again. 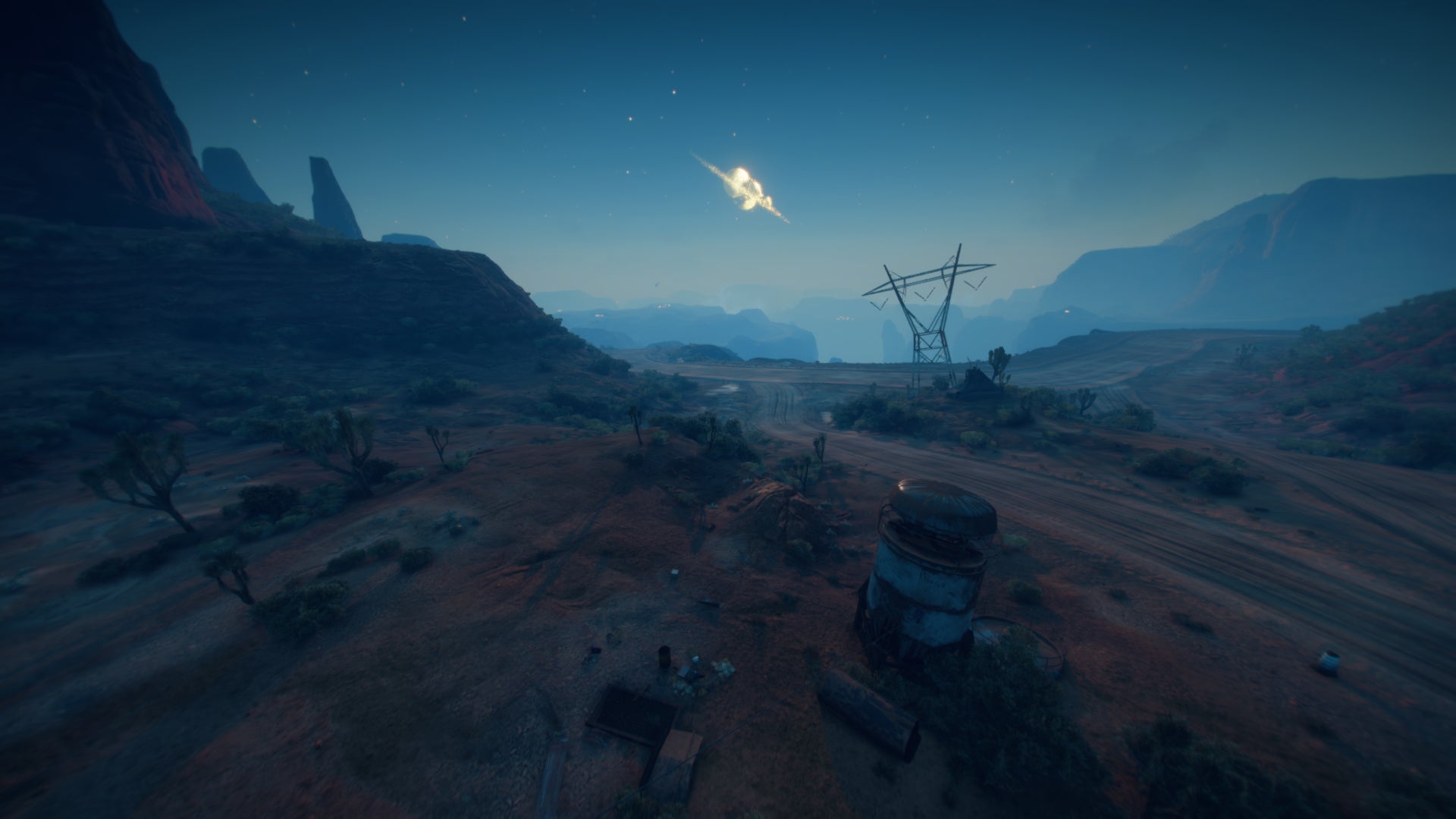 This feeling of having something cool but never really needing it persisted through my time with Rage 2. The way you can move during combat is thrilling, sprinting across the length of the stage and jumping up and down platforms. It’s fun, but it’s much simpler to take down your enemies by funnelling them into a corridor and then hitting them with the assault rifle.

Car combat is cool, especially given my fond memories of slamming other cars with mine in Mad Max, which was developed by Rage 2 developer’s Avalanche. But when I went out to take down a convoy in Rage 2, I felt cheated. There isn’t a lot of strategy involved: Your car, which talks though I wish it wouldn’t, helpfully tells you when a semi-truck’s weak spots are visible. You could ram other cars, but it’s more expedient just to shoot them.

Like every large enemy in this game, most vehicle battles come down to “shoot the glowing blue thing.”

This is where Rage 2 is Bad Stupid. Bad Stupid makes me feel condescended to. Boring boss fights are Bad Stupid because they rob me of the chance to use my powers in an interesting way. You’d think boss fights would be chances to learn new strategies for using your powers, or at least moments for the gross out of excessive gore.

Instead, most boss battles were simply opportunities for me to use my rocket launcher, which didn’t have much application outside of boss fights. It’s nice to use the rocket launcher, but boss battles still came down to shooting the glowing blue part, albeit with a bigger gun. For the most part, Rage 2 shows that it’s hard by shoving more enemies at you.

By the end game I could carry over 400 bullets for my assault rifle and take them down just like every other fight, which is Bad Stupid. 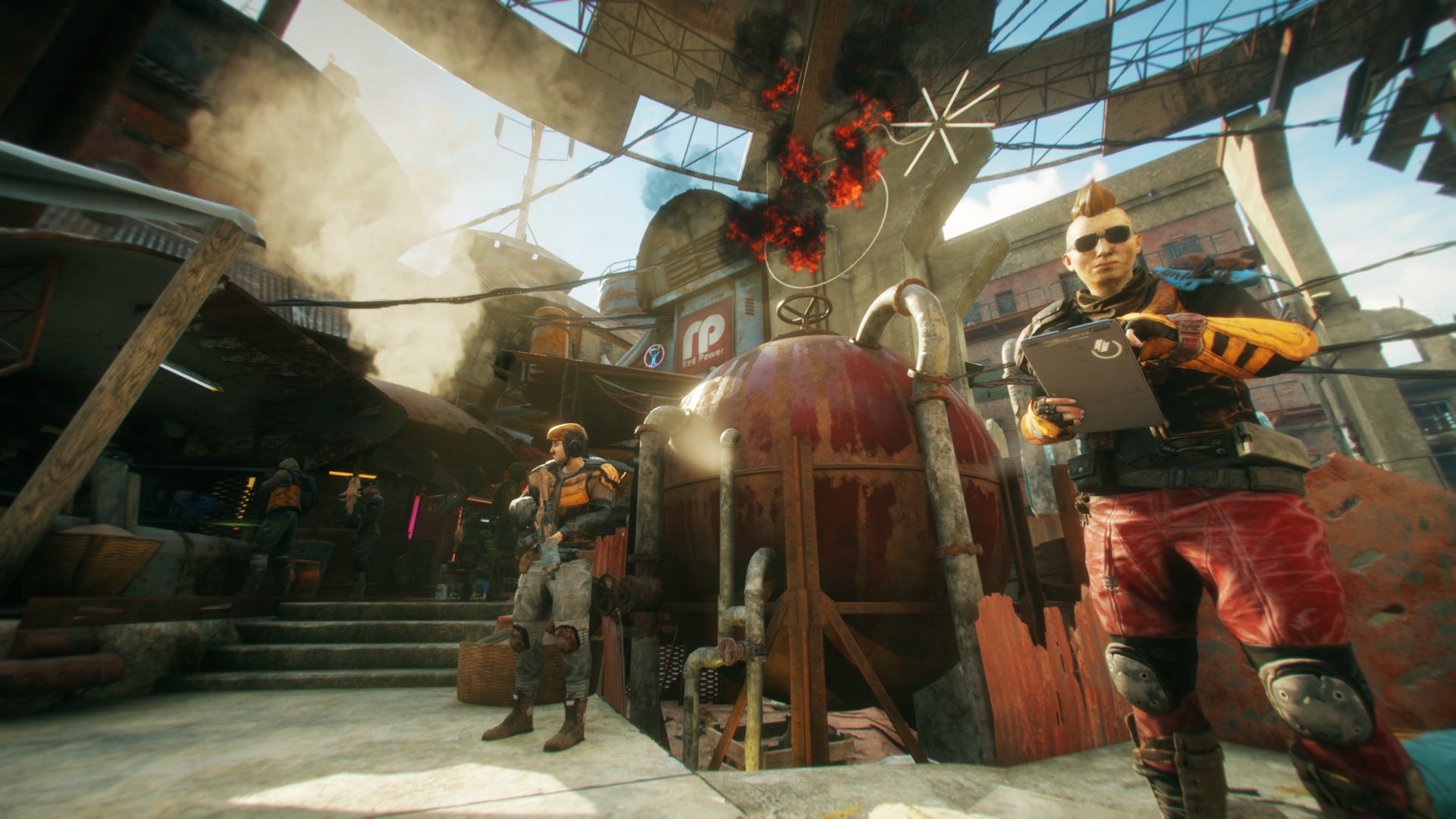 Rage 2’s most egregious instances of Bad Stupid are in the writing, which doesn’t seem to like its own plot or characters. After a dozen quests where I was sent to a location to kill some guys, Doctor Kvasir, a mutant-riding mad scientist, summoned me for a mission to get a strand of General Cross’s DNA in order to make a virus that would kill him.

After a little back and forth, Walker said to the doctor, “Let me guess, I’ll be able to find it in a heavily fortified base filled with baddies to kill?” She sounded bored, even exasperated. That moment was probably meant to be self aware, but it just made me want to scream. Knowing that the narrative has a problem and putting a lampshade on it is not the same as actually addressing or fixing that problem.

There’s one particularly bad moment with a character called Mama JoJo, who you meet in Lagooney, one of the three Trade Towns in the Wasteland. Lagooney itself is gorgeous, a Floridian wetland full of overgrown bamboo and tangles of weeds. The people of Lagooney aren’t particularly interesting. Like much of Rage 2, Lagooney is a pastiche of other pieces of media, which isn’t a bad thing in and of itself.

It’s just that Lagooney is, well, a redneck town. If you think Appalachians are funny, you might like hanging out there. It’s not really my jam.

Mama JoJo is an information trader in Lagooney. His name is Joseph, he told me, but “everyone” calls him Mama JoJo. He has his hair cut in a soccer mum bob and wears a cropped tank top with a slit in the top to show off his cleavage. It registered to me that this was supposed to be funny, but I had trouble figuring out who the joke was on.

Was I laughing with JoJo, or at him? I never went back to Lagooney. If Doom were in the desert and less fun.

The shooting, the powers, the very pretty environments, and Loosum Hagar

not enough variety in enemy encounters, not a lot of good reasons to use your powers

20 hours, two or three of which were spent just driving around looking for something interesting to do

Not all the towns are like Lagooney. I really liked Wellspring, the closest thing to a city in the game’s Wasteland. It’s neon and bustling and big, with a nice market area right outside of town hall. I like Wellspring’s mayor, Loosum Hagar, a straight-shooting woman who tells you to watch your back each time you leave her office.

I liked the weird dynamic she has with Klegg Clayton, a rich blowhard trying to assassinate her and take over the mayor’s office. He’s all glitz and glam, while she’s more rough and tumble. Her writing was Good Stupid.

There are other instances of Good Stupid in Rage 2. I enjoyed using the rocket launcher, and I really liked driving up to enemy bases and shooting people with my car’s gatling gun. I liked when people’s brains straight up popped out of their heads when they died, and the wet squelching sound when I got a headshot.

Though I defaulted to them out of disappointment with the game’s other tools, I really loved how the shotgun and assault rifle felt to shoot. The shotgun is booming and knocks back enemies, while the assault rifle is precise when I need it to be and sprays a nigh endless barrage of bullets for every other time. What all this misses is the sense of earnestness that makes Good Stupid things like Andrew WK’s music so great. 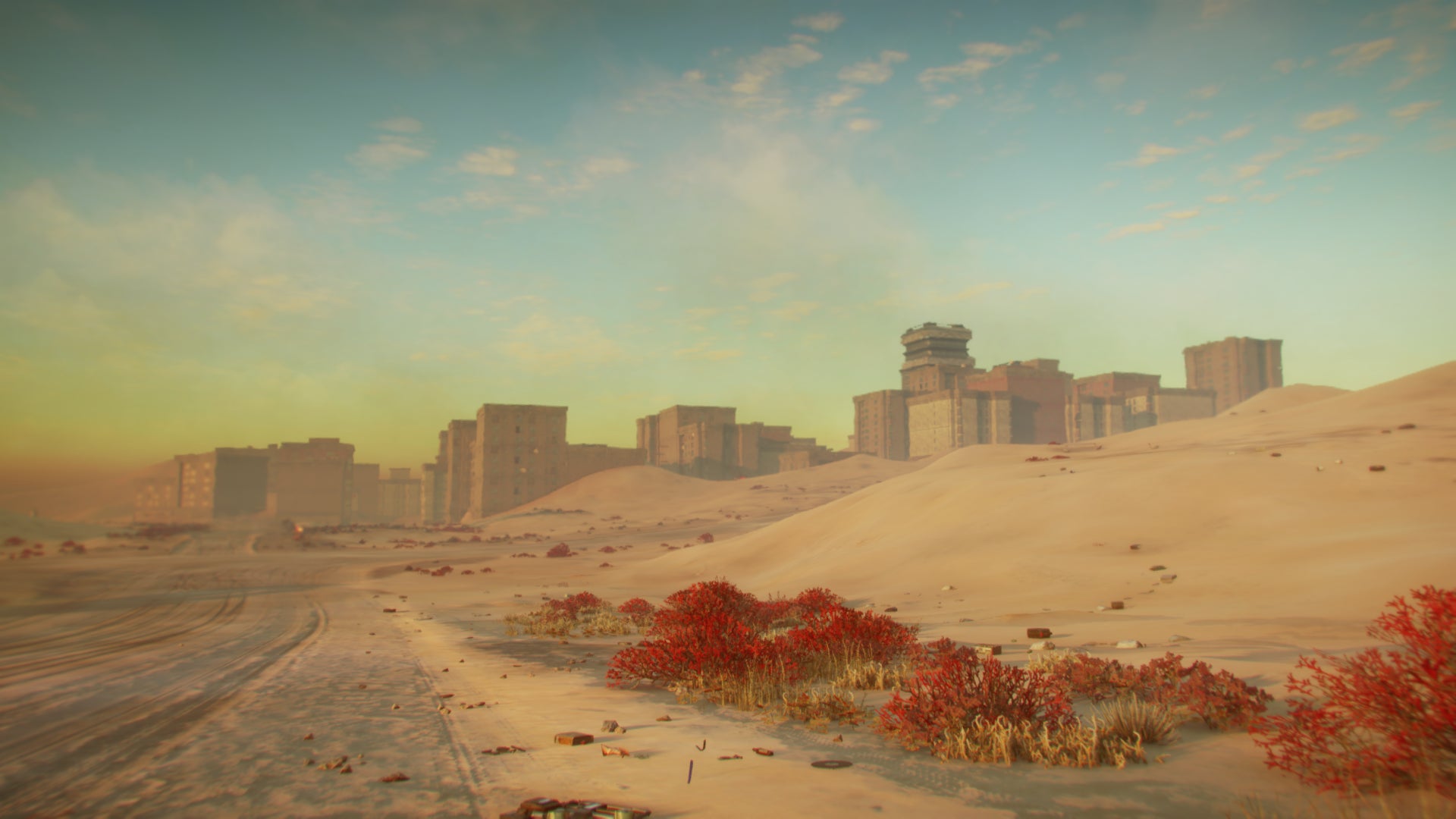 There’s no irony to Andrew WK’s music. It’s not deep. His most recent album, You’re Not Alone, kicks off with the lead single, “Music Is Worth Living For.” It’s not smart, nor subtle, and it doesn’t need to be. It makes you feel good.

When I met characters like Mama JoJo, or when Walker lampshaded the saminess of the quests, or when Rage 2’s interesting intrigue between characters ended up just being another rendition of Go To A Location And Kill Those Guys, I didn’t feel good.

Rage 2 has moments of Good Stupid, but they’re outweighed by moments of Bad Stupid: uninspired and rote enemy encounters, not enough reasons to use my powers, and a general disdain for its own fiction. For a game about being an overpowered Ranger who can punch people until they explode, I rarely felt powerful.

Rage 2 promised me chaos in its lawless world that I alone could save with big guns, super powers, and a bitchin’ car, but by the end, I was still looking for it.