In March of 2018, a group of role-players from Final Fantasy 14’s Balmung world published the first issue of Wark!, an in-character magazine that explores the world of Eorzea through news, interviews and articles. Now 12 issues in, Wark! is a cute and clever chronicle of a year of online adventures.

One of the problems with massively multiplayer online role-playing games like EverQuest, World of Warcraft or Final Fantasy 14 is that, eventually, the adventures end. Servers close. Guilds disband. Special events come and go. One day other players are your best friends and adventuring companions; the next day they’re gone, rapidly fading into memory as new adventures rush to fill the void. There’s no permanence unless you make it. An FF14 Free Company called Chocobo Dreams has found a creative way of doing that through Wark!

From the first issue’s forward:

WARK! is a project by Chocobo Dreams – a Free Company with glory in mind, but not the type granted by battle or adventure. Instead, we want to leave our mark on Eorzea with a different kind of legacy by spreading the simple joy of creativity.

The first issue of Wark! Includes an interview with a local in-game business owner, a fashion “photo” contest, an article on some in-game characters, chocobo racing forms and more. 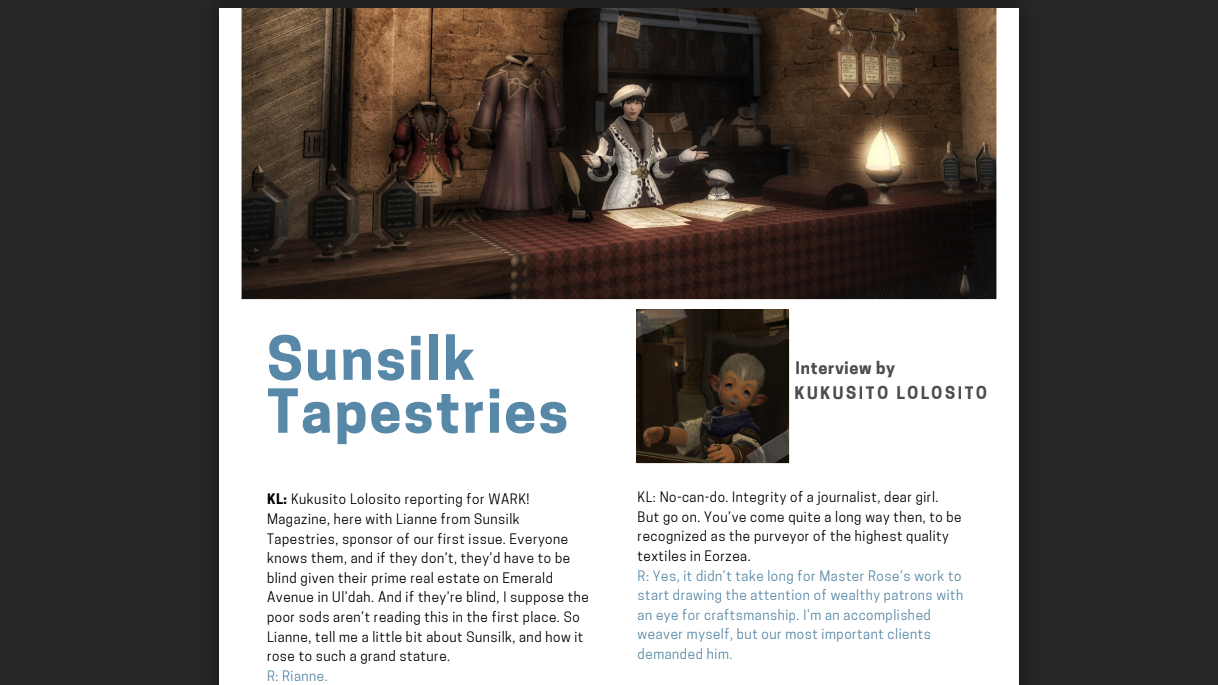 Every issue is a lasting memory for the players who experienced the interviews, wrote the articles and gathered those chocobo racing stats. At the same time, it’s something for players in the Balmung community and beyond to enjoy outside of the game.

Speaking to Kotaku, Wark! editor-in-chief Q’Tahldi explained that the magazine is a labour of love. “To us it’s a creative outlet (as there’s little room for that in our day jobs for most of us), a reason to learn skills that we otherwise have no practical need for at the moment but are still fun to have (like design, creative writing, and photo editing), and a different way to interact and engage with our server/community and the game itself.”

Engaging with online games outside of the game itself—by making a magazine, doing a podcast, or streaming an in-character radio show—can make memories that last far longer than that one time I raided that place with that guy. Oh man, he was great.

Hit up the Chocobo Dreams website to browse all 12 issues of Wark! for free, before it gets snatched up by Apple News+.