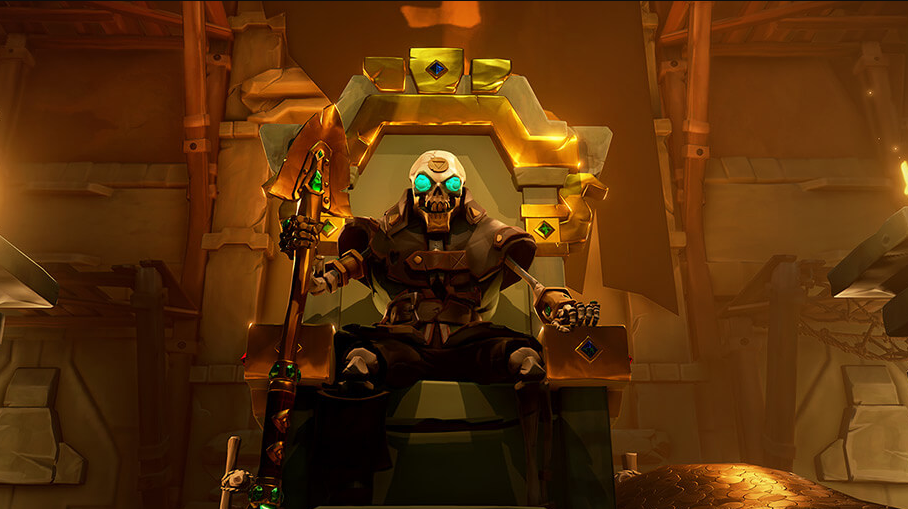 Sea of Thieves’ Anniversary Update is live. The pirate game’s ambitious expansion brings activities from competitive player-vs.-player battles to fishing and cooking. Largest of all are the “Tall Tales,” a lengthy chain of cutscene and exploration driven story missions that are designed to be completed in a group or by your lonesome.

The first hunting down the treasure-studded Shores of Gold finally gives Sea of Thieves the structure and direction some players have been craving from the start.

Before the Tall Tales, there were two things to do in Sea of Thieves: tirelessly grind missions to become a pirate legend or sail around to hunt down other players. That was all right in short bursts, but the charm of hunting down skeleton bounties or delivering chickens wore off quickly. Instead, wouldn’t it be great to hunt down a lost island, delving into booby-trapped tombs and coming face to face with evil skeleton lords?

The first Tall Tale, “Shores of Gold,” offers just that, and while I’ve only scratched the surface of it, I’m really enjoying the adventure. The story involves a meeting with the Mysterious Stranger lurking in Sea of Thieves’ taverns. They share the story of the Shores of Gold, an island packed with riches that is caught behind impenetrable fog. To reach it, you’ll need the Shroudbreaker, a hidden artifact that can lead the way. 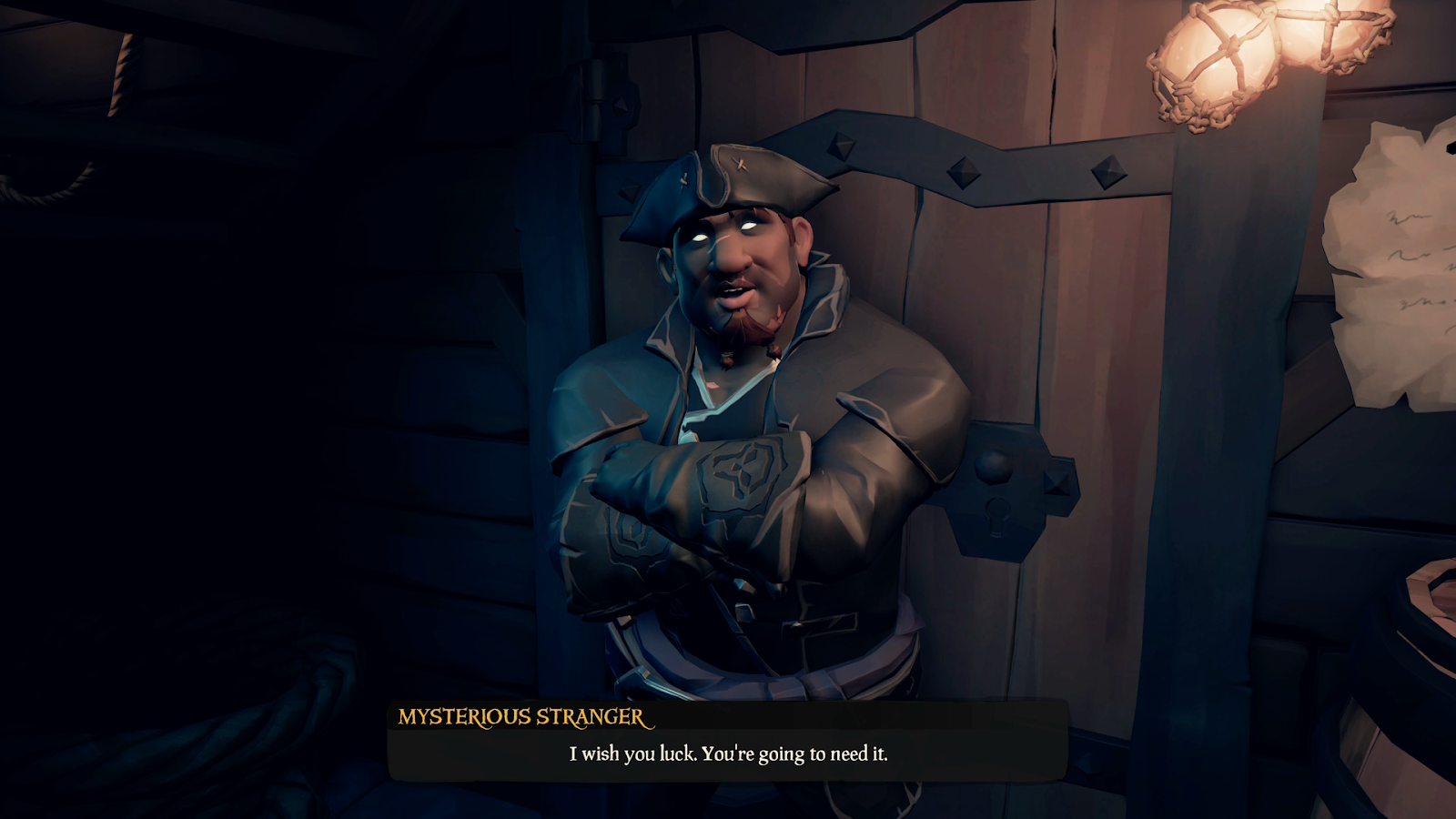 “Shores of Gold” is something you can tackle with friends or by yourself, an entire series of riddles and missions that tells a story of greedy pirate lords and ancient tombs. I played the first part of the questline this afternoon and spent about three hours on a mission that sent me all around the ocean to follow the last crew that searched for the Shroudbreaker.

All I had to start with was their journal, which outlined a ruined journey that left them shipwrecked. I’ll admit that for this first part, I sort of cheated the puzzle. I set sail to where the crew had voyaged and ran into other players around a small island where the wreckage was found. Because you can’t turn Sea of Thieves completely offline, it’s possible to be spoiled by simply noticing where players are congregating.

Thankfully, the rest of my journey was a more interesting challenge. After recovering a log from the ship, I was forced to chart their course and find where the crew abandoned their cargo. This part of the story is randomised for each player crew, meaning that you can’t simply look up hints online. The result looked like this: 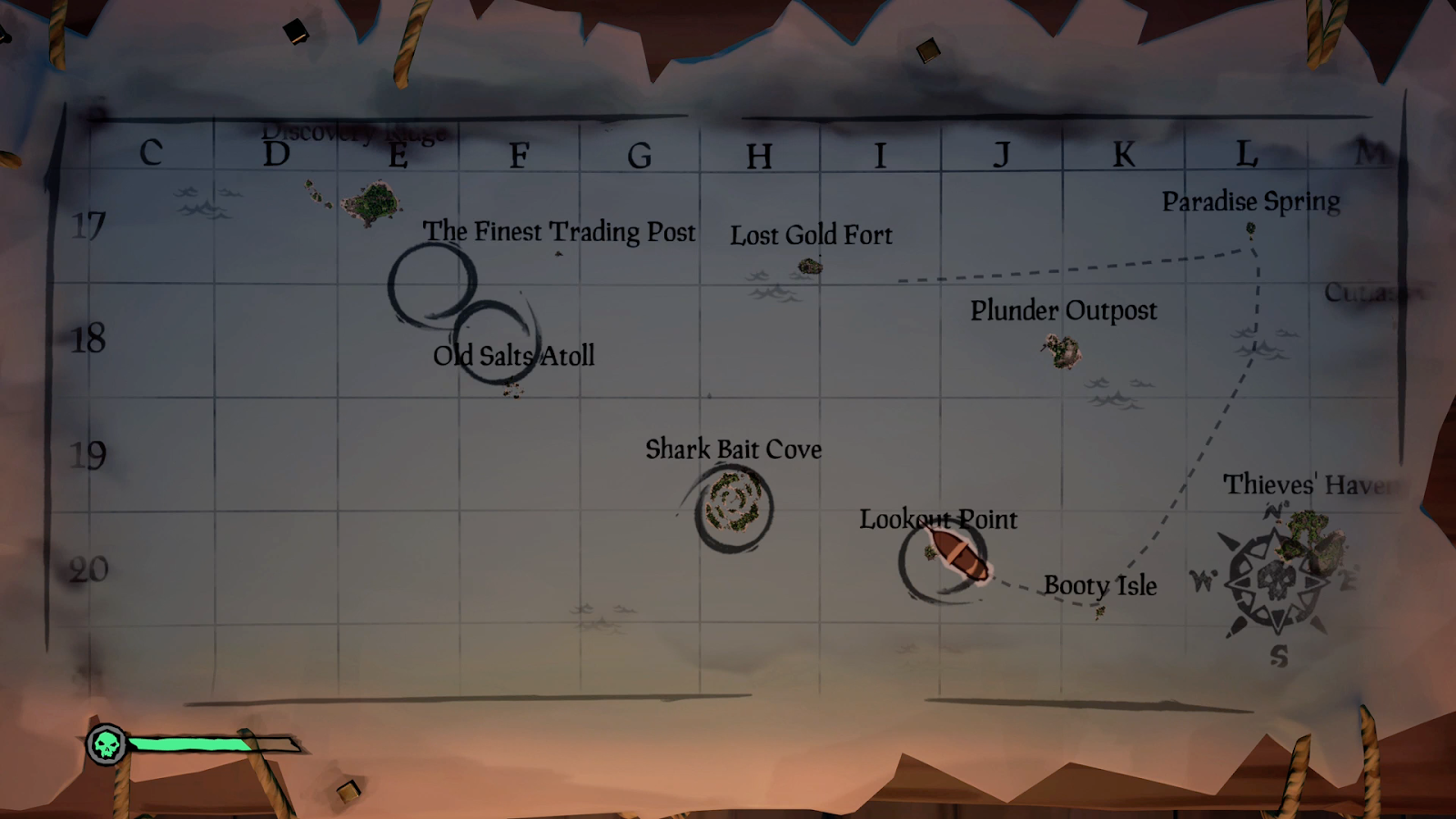 So, I’d already hunted down a shipwreck, and now I’d tracked a ship’s course through the ocean. My reward was a chest—one I plucked out of the ocean using Sea of Thieves’ brand new harpoon gun—which contained a magical totem that unlocked the door to a hidden tomb.

The first leg of “Shores of Gold” felt a bit like some of the exploration events that Sea of Thieves has held before but with much more drive and mystery. Instead of finding a few trinkets, I had one goal and a series of puzzles and complications to overcome.

The most involved of these was the tomb itself. After lighting a series of braziers, I was locked in the room and needed to solve a puzzle while it filled with water. When I spoke with Sea of Thieves’ producer Joe Neate last month, he mentioned films like The Goonies and the various Indiana Jones adventures as an inspiration for the Tall Tales.

This definitely felt like an old-school adventure movie puzzle-tomb. I managed to disarm the trap, find hidden medallions on the island, and grab the Shroudbreaker. I fled the island pursued by coral-studded skeletons. By that point, I’d been playing this Tall Tale for around three hours.

This was only the first part of my journey, and I want to continue the rest. The Shroudbeaker is apparently missing some jewels held by a dangerous Pirate Lord who has killed everyone with whom they’ve crossed paths. That sounds a bit dangerous, so I decided to try to tackle that part with friends.

The opening hours of “Shores of Gold” feel fun. It’s astounding how much Sea of Thieves benefits from having even a little bit of narrative context and some voice-acted quest givers. I’m fine with not grinding to become a pirate legend, and time will if the new arena PVP mode holds interest.

For now, having a genuine pirate adventure with a clear goal and neat puzzles is fantastic. If more stories and treasures are to come, I expect I’ll be sailing the sea more often in the future.