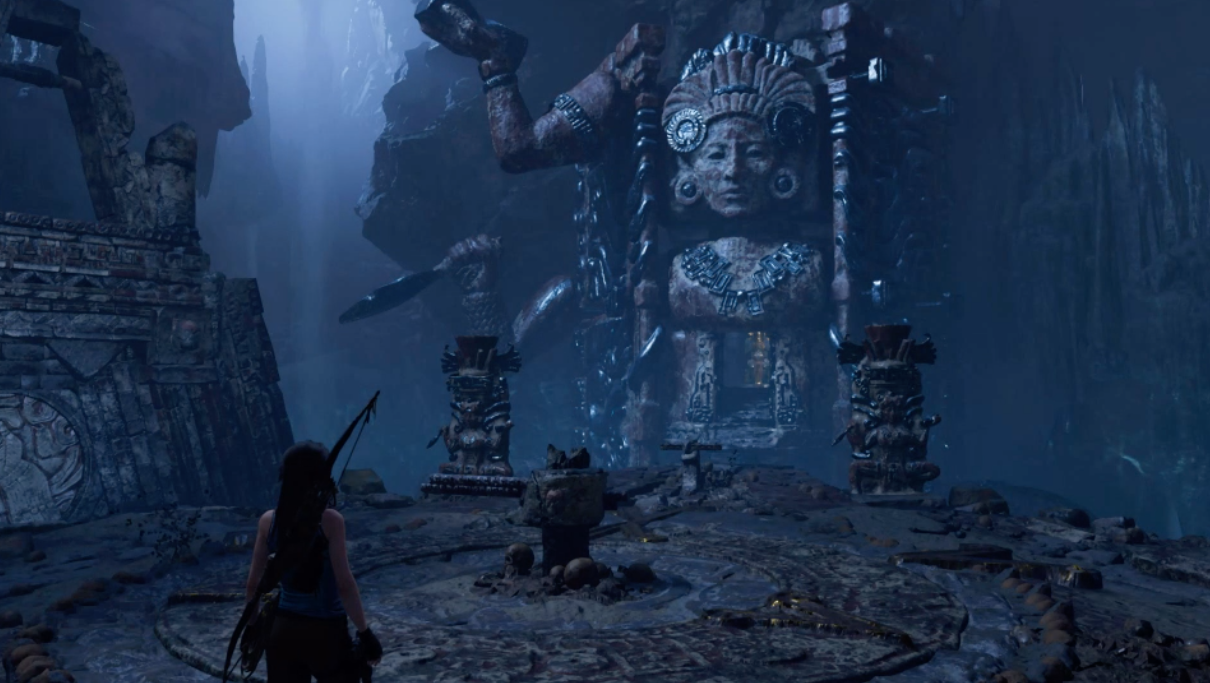 Last year’s Shadow of the Tomb Raider had a season pass with a packed lineup that must have sounded great in its publisher’s boardroom and maybe in the ears of some fans: seven expansions, one a month, adding a new tomb each time. Can’t miss, right?

For a while, it did miss, with each small expansion only extending the struggles of a struggling game. Now, with it all but complete, I feel it has finally come together very well.

Nothing’s been a smashing success for Shadow of the Tomb Raider, which launched last September in the shadow of a PS4 Spider-Man game that generated much more buzz. It shipped with the wrong ending, got off to what its publisher described as “a weak start” in sales numbers, was put on sale in October, and by February was added to the Xbox One’s all-you-can play Game Pass subscription service, which probably doesn’t happen if a game is a hot seller.

Shadow of the Tomb Raider is by no means bad. It’s a fun game that uses the revised action/climbing/shooting/upgrading formula introduced in the 2013 Tomb Raider series reboot and refined in 2015’s spectacular if overly combat-heavy Rise of the Tomb Raider. Shadow dials down the gunfights and increases the exploration, letting players propel franchise icon Lara Croft through more tombs than Rise did.

Players explore a vast Peruvian jungle and can chat with crowds of characters in the game’s two large, remote villages. The game was largely a pleasure to play, though it grapples awkwardly with the damage Croft does to the cultures whose tombs she raids, and its jungle setting is beautiful but played out, having appeared in so many other high-end games of late.

Shadow’s season pass was structured to expand the best parts of the game by adding more tombs as well as short quests that wrap around them. Each monthly update would also add a new outfit, weapon and character skill.

The first of the seven downloadable instalments, The Forge, shipped a month late. Like the main game, it was more good than bad, but awkwardly put together. It paired a decent sidequest with a clever new dungeon involving a tower and some gas that could be detonated with fire arrows to make some platforms swing.

The Forge’s bonuses, however, were frivolous non-sequiturs. Players got the ability to craft grenades and a new gun called the Umbrage 3-90, even though Shadow doesn’t have much combat and the DLC had just one fight against a few wolves.

The second instalment hit in December, offering a windy new dungeon wrapped in another short quest and tied to a new skill and a new outfit, the not-as-cool-as-it-sounds “battle dress.”

By the release of the second add-on, I realised the pitfalls of the piecemeal release schedule of the Shadow of the Tomb Raider season pass. An hour of fun but flawed new stuff is a barely satisfying snack.

Any improvement they make on the game is so incremental as to be imperceptible when played at a monthly pace. I kept getting caught up with the new Assassin’s Creed or Red Dead or other stuff and, sometimes, I didn’t even have room to keep Shadow downloaded to my PS4.

The piecemeal updates also created another problem. The more abundant the scheduled updates, the more the game’s community seemed to expect its developers to address community feedback. Most of that feedback has to do with Lara Croft’s outfits, not the new tombs.

The promotional tweets about the Shadow of the Tomb Raider season pass expansions are frequently bombarded with replies of two types.

There’s the “PLEASE BRING THE SHORTS” crowd and the “So cool, a new outfit that we can wear in approximately just like 15% of the game” crowd. The former is the grumbling from fans who are not satisfied with new Lara Croft outfits unless one of them involves her iconic short shorts.

Those comments, occasionally accompanied by complaints about her bust, often seem to stem from people annoyed about the desexualised direction recent Tomb Raiders have gone in (for the record, you can switch Croft’s model in the new game to a low-polygon PlayStation throwback, complete with short shorts).

When the developers promoted the seventh DLC’s new outfit as “tactical adventurer classic,” adopting Croft’s early wardrobe colour scheme but putting her in brown pants, you’d think, from the reaction, that Nintendo had just put Zero Suit Samus in a raincoat. 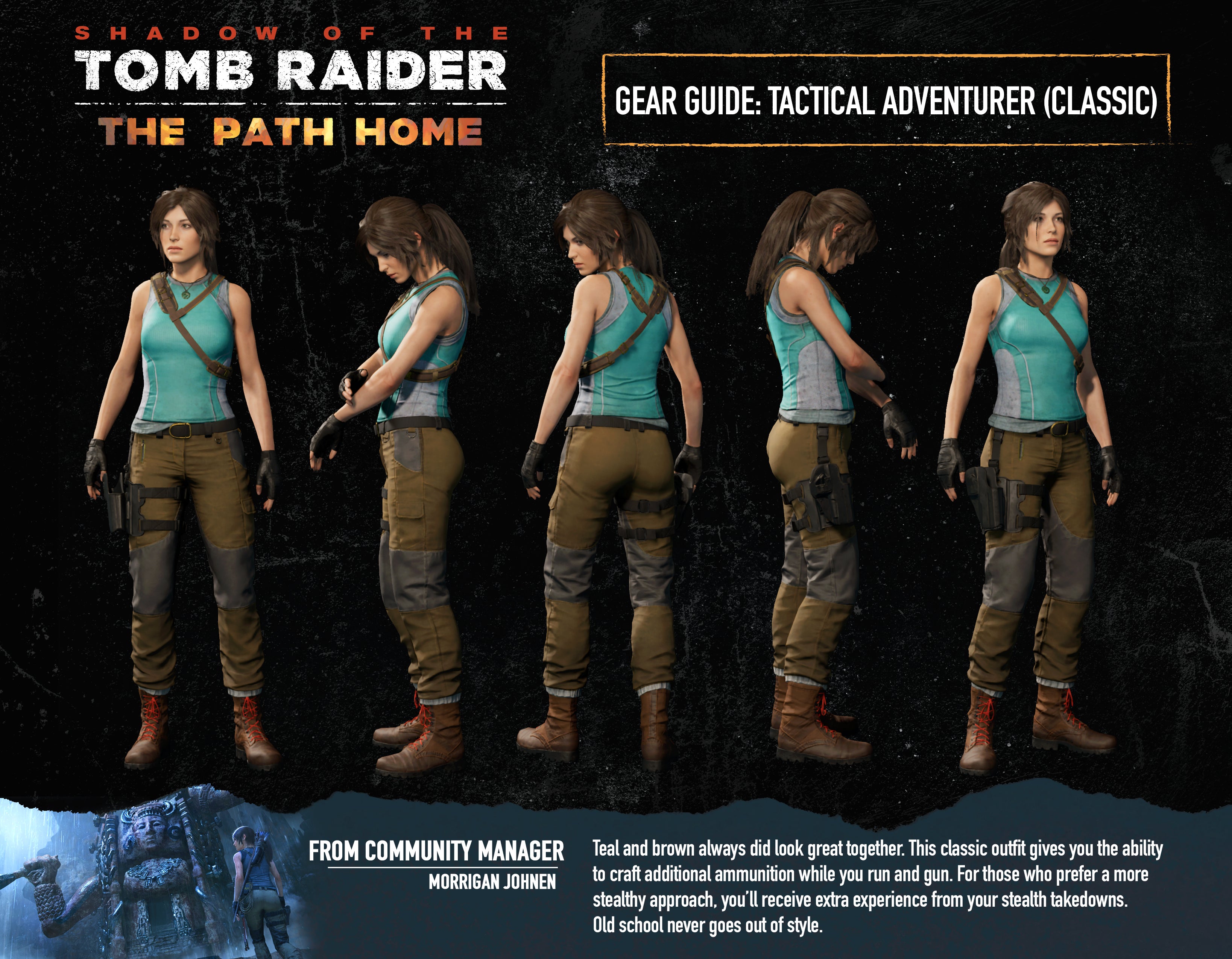 Shadow’s classic outfit was fine, except for the fact that it is one of many outfits you can’t wear in a large chunk of the game. That brings us to other, more persuasive school of complaint. The game’s designers have offered players dozens of outfits but block many of them from being worn when she’s walking through the game’s massive, remote hub city of Paititi.

Players enter this hub often, talking to myriad villagers about quests, scouring it for hidden items, traversing it to find entrances to new mission areas. All the while, only the game’s so-called tribal outfits are available. There’s an in-game narrative justification for this: Croft’s tribal outfits make her less conspicuous.

The result, though, is a forced outfit change any time she goes there and the disabling of many outfits, including the new classic one, whenever she’s in town. Time and again, fans have asked for the game’s developers to allow all outfits to be worn in all places. Seven updates to the game later, it’s still not been added.

Would it break immersion? Strain credibility even by the loose standards of an action-adventure like Tomb Raider? This is a game where you can change the language you hear from civilian characters, from their native one to English, so there’s plenty of immersion-breaking going on already.

Reps for the game declined to provide comment to Kotaku about either of the community’s long-running clothing-related complaints.

Despite those issues, the DLC continued to trickle out throughout the first half of 2019. Eventually, the upside of releasing so many additions to the game emerged. If you fall out of sync with a release flow like this and return later, there’s a lot waiting for you.

By late April, the game’s season pass had added the following:

Each hour-long DLC add-on was fine. Playing five of them in a row was more than fine. Combined, they offer a terrific multi-hour new dive into the game. The tombs are visually spectacular and can be satisfyingly tricky to get through. The side quests add a little more depth to the people in the game’s world. Together, they make a game that was already heavy on exploration and spectacle burst with it.

The DLC doesn’t fix the game’s flaws, but it does accentuate its positives. None of the add-ons deal with Shadow’s tonal issues nor more comfortably situate Croft and her craft into the world she’s regularly trampling through.

They do add a lot of fun climbing and questing, though, and that works if, as so often is asked of people who play games, you’re able to compartmentalise. 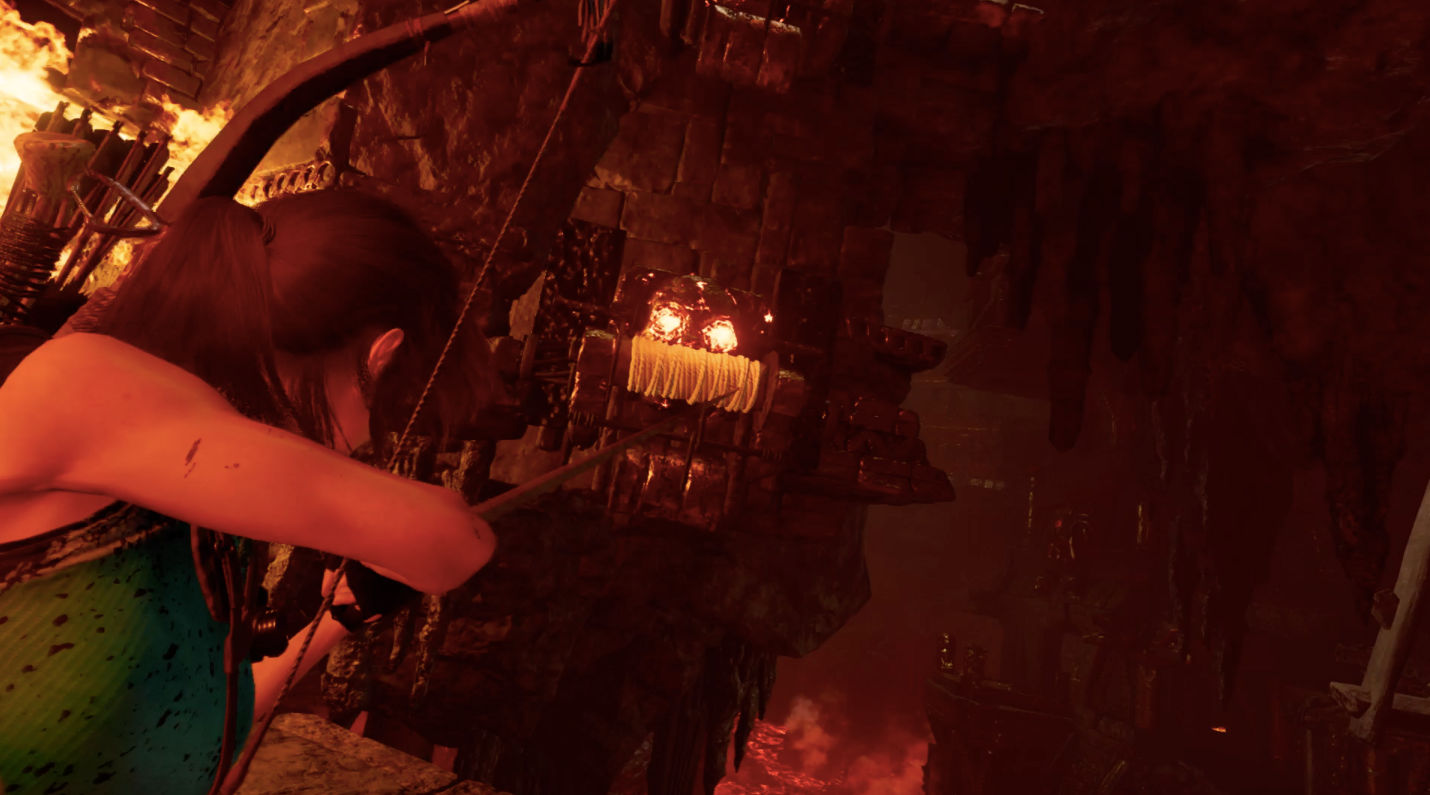 By the time the seventh and final expansion came out in April, it felt like Shadow of the Tomb Raider was long gone. There are still faithful fans who praise the game and have followed its updates. There are still the people salty about clothing, still offering a mix of comments on social media and forums about the lack of Lara Croft shorts and the inability to wear half her outfits in a large section of the game.

It’s hard to imagine that the season pass has done well for the people selling it, and it’s not ameliorated some of the grievances fans have had with the game, but for those of us who were enjoying the formula of the Tomb Raider’s reboot, it’s added up to a lot of good extra stuff.

And then there were eight. 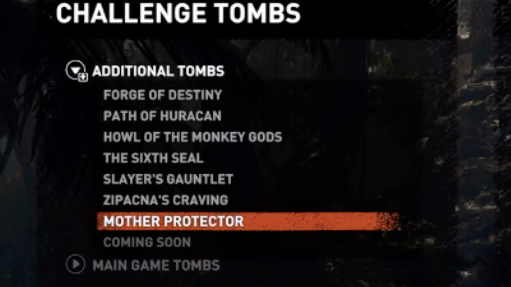 The twist to all of this is that it’s not over. At some point during Shadow of the Tomb Raider’s post-release life, fans noticed an option in the game’s menus for an eighth add-on tomb. Some claim that data-miners found proof that it involved Croft Manor, Lara’s family home.

That’s not confirmed. The game’s DLC menus still only show space for seven new character skills, one for each DLC, with no room for an eighth, so it doesn’t seem like any eighth offering would provide the full range of tomb/quest/outfit/gun/skill that the others did.

The small community that still talks about the game is otherwise stumped, wondering if this will be an added bonus for season pass holders, something free or paid for everyone, or what. The game’s publisher has been silent about the eighth slot and declined to answer Kotaku’s question about it.

The game simply lists the eighth tomb as “coming soon”, which means that this game’s improbably long and awkward post-release lifespan will continue. The last word on this game has yet to be written.