So That Bloodstained Trailer Was Weird, Right?

bloodstained ritual of the nightfeatureigakickstarter

Bloodstained: Ritual of the Night, Koji Igarashi’s partially Kickstarted successor to the Castlevania series, hasn’t had the smoothest ride down the road to release. After making headlines in 2015 for garnering a million dollars in a single day, the forthcoming action-adventure game missed its original 2017 release window, then got delayed once again in 2018 before settling on its new, presumably final, release date of June 18, 2019.

The trailer starts with some unremarkable gameplay footage of the player character, Miriam, moving through a level. This footage gets slowly grayed out as internet comments and forum posts begin to appear on-screen.

“Bad character animation, bad textures for the cristals [sic] on Miriam skin, no animation for Miriam’s hair, there’s time to solve these problems, iga” one user wrote, addressing Igarashi by his fan-preferred nickname. “Looks awful aesthetically, should have hired a competent art director. Here’s hoping the gameplay is good,” wrote another.

On and on the comments appear until they fill the screen: comments about how the work-in-progress looks “ugly,” “like a cheap mobile game,” or “like poop.”

And then we cut to live-action footage of Igarashi himself, drinking wine in a grand, gothic dining room. He tosses his glass to the side with resolve, shouting in Japanese that he will “prove them wrong!” as we cut to side-by-side footage of the game’s new, vibrant reworked art compared to the older art fans complained about. 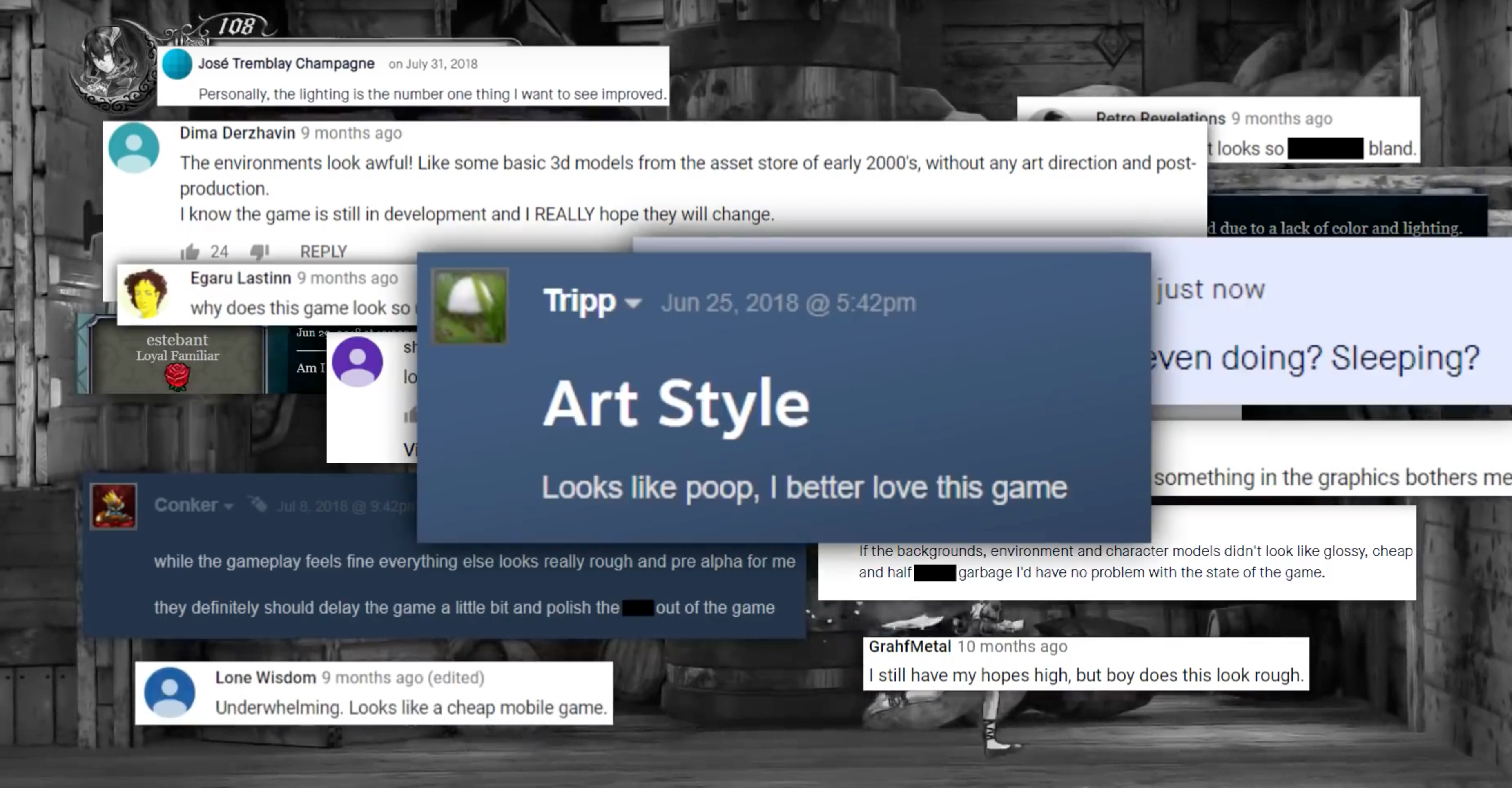 On one hand, it’s a good bit. Taking criticism in stride with good humour and using it to build what genuinely seems to be a better-looking game is admirable, especially when you consider the default stance of a lot of that criticism is downright hostile. On the other hand…the situation as a whole is pretty messed up.

One of the perks of crowdfunding is the way that it allows fans to participate in a part of the process that they were previously outside of. Developer updates and backer forums allow the people who are ostensibly already sold on a game to give real-time feedback for something they’re already excited about and invested in.

Who better to give helpful criticism than the folks already happily in the tank, spending money because they believe they’re helping a game they want to play get made? But there’s a downside: Sometimes fans don’t actually know what they want, or what a game needs, or what a team can pull off.

This is normal and totally fine. Most fans aren’t game designers, nor do they need to be in order to have an opinion about games. People who know very little about how games are made often have very good, fun ideas about them. The trouble comes, as it often does, when you add the internet.

The truncated, blunt nature of most internet communication isn’t conducive to allowing developers to understand what, specifically, made the art style “poop” and how or why the lighting, textures, or colour palette could be improved. It’s easy to lose perspective on power dynamics and basic human boundaries online, as ease of access to developers and creators allows for a level of communication that’s now become normal but not really codified.

In public real-world interactions, we have manners and etiquette and just the general prospect of another living human in front of us who may react to something that we do in any number of ways—ways we take into account before we engage with them. You can be a jerk offline, but you are then subject to however the person in front of you decides to deal with your chicanery. 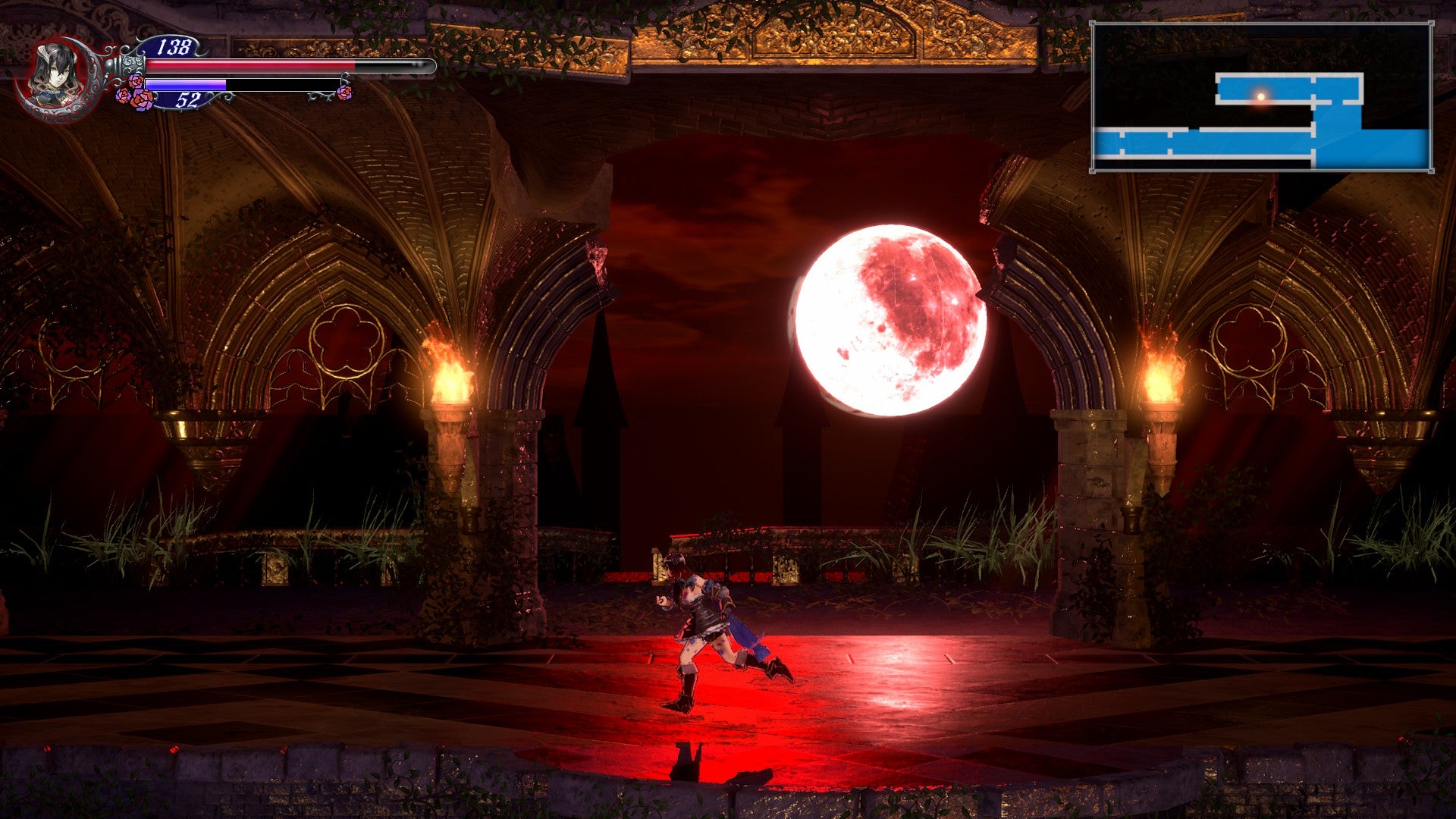 Online, you don’t really have that, unless your community is aggressively moderated by other people—something that few have the resources or time to do when confronted with the unending stream of people interacting online. Crowdfunding, it seems, can make the bad parts of online interaction worse, even as it upends the established dynamic.

Part of the appeal of crowdfunding is the inversion of the relationship between developers and players. It used to feel like developers held all the power but said little, and the people who played their games had little input into the process. Maybe fans’ biggest qualms would be addressed in a sequel; maybe not.

It’s easy to see crowdfunding as a way to shift that power, where fans now have a way to see things early, voice their concerns, and collectively steer a game in the direction they would like to see it go. But how democratic is that process? How well do the loudest, angriest backers represent the whole? How do developers decide who gets listened to and who doesn’t? Because in situations like this one, being toxic seems like a good way to get results.

It shouldn’t be that way. You could argue that developers’ choice to crowdfund a game is to trade in a few bosses for many, but the cold maths of capital doesn’t really translate here. You’re not buying shares; you’re enabling a creative vision. Should the voice of the backer that donates $US1000 ($1,421) be more important than the one that donates $US1?

Maybe, and some Kickstarters do offer such a perk. Not Bloodstained, though—the most that backers can get from the highest tiers is input on a special room or an enemy design. The lowest backer has about as much input as the highest, and based on the trailer, which seems to draw from a mix of Kickstarter comments and responses on other outlets, backer input is indistinguishable from any run-of-the-mill fan comment.

Since fan input is, in essence, free market data, it makes sense that developers look both to backers and elsewhere to gauge the response to their games. But we also know from other games that developers are sometimes frustrated by their games’ communities, which often quickly turn toxic in a way that makes it impossible to foster good dialogue, creating an environment where developers’ only real options are silence or acquiescence – lest they make a bad situation worse by being frank about setbacks, or making art decisions that may not seem wise at the time.

This cuts both ways – maybe a developer like Igarashi actually appreciates this level of challenge. Maybe they do not. Either way, the default relationship between fans and developers is one of appeasement, not understanding. Crowdfunding takes that often-toxic dynamic and accelerates it with money, which translates to power.

And this is what it leads to: a tired man sipping wine alone in a cavernous room, the weight of his fans disdain heavy on his brow. It’d be a great joke, if only we could figure out the punchline.