A Plague Tale: Innocence, from French developer Asobo Studio, is a third-person game set during the catastrophic events of the black plague as it destroys everything and everyone in its wake. You play as Amicia, a teenage girl helping escort her younger brother, Hugo, to safety by avoiding swarms of disease-ridden rats and the violent soldiers of the Spanish Inquisition, who will kill Amicia and her brother on sight.

I made a video showing off the game and how it works up top, but if you’d rather read the transcript, here you go:

Hugo has a mysterious illness that drives Amicia’s search for safety and her desperate search for a cure. A Plague Tale is a pretty engaging yet simple story about two siblings forced to survive on their own and, as the game’s subtitle alludes to, shed themselves of their innocence much faster than any kid is meant to. 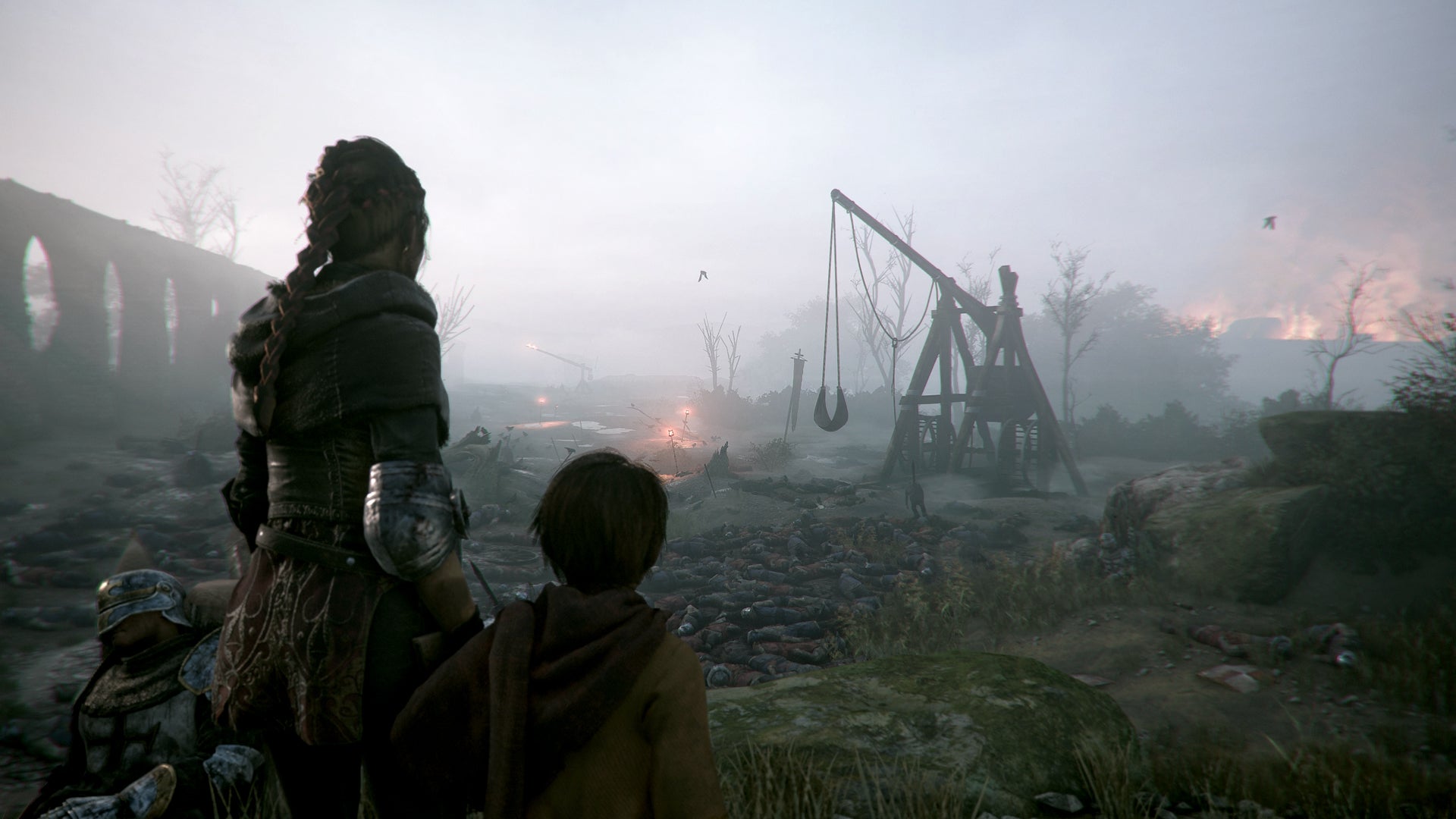 A Plague Tale takes a page out of games like Hellblade: Senua’s Sacrifice by presenting a simple yet emotional story that guides the player through narrow linear environments that they can use to avoid confrontation.

Early on in the game, that means throwing rocks and pots to distract enemies so you can sneak past them. Certain environments are infested with huge swarms of rats that avoid light and stick to the shadows. Venture too far from the light and you’ll be overwhelmed by hundreds of hungry rats.

At first, you light torches or fire pits to cast light on a surrounding area and watch the rats scatter. Eventually, you get the ability to direct light to pave paths to safety or utilise the rats as weapons against unsuspecting enemies.

It’s like a really gross game of “the floor is lava.” The swarms of rats are visually impressive and genuinely creeped me out. It’s pretty satisfying to see hundreds of rats disperse. 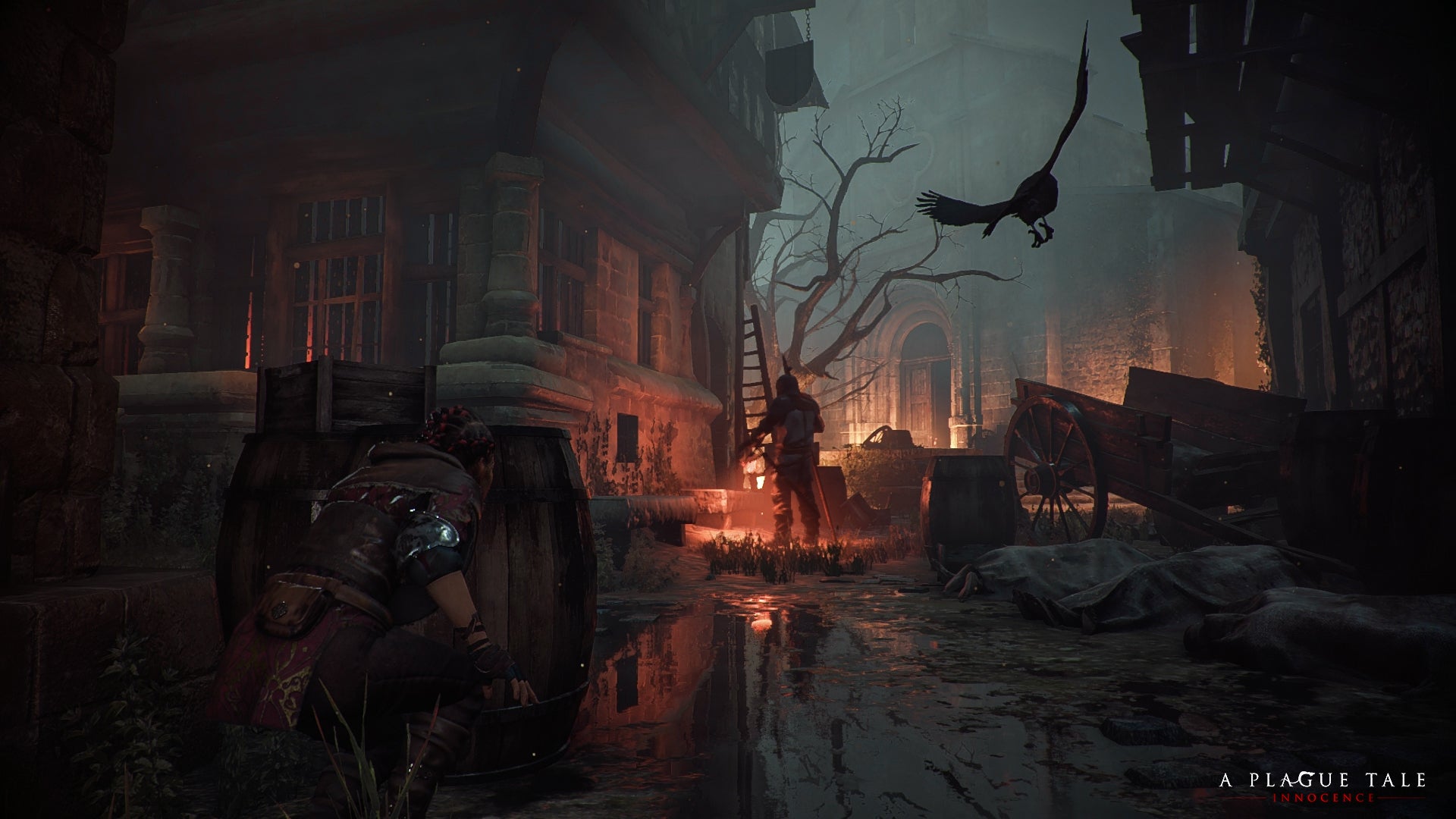 It’s refreshing to play a game that doesn’t encourage blind leaps around corners and tackling multiple enemies at once and instead prioritises avoidance and quick-thinking to solve what are essentially big rooms full of moving puzzle pieces.

While confrontation with enemies is best avoided in general, the game can sometimes be comically easy. Guards usually completely have their backs turned to you, and sometimes multiple enemies face the same direction, making them easy to avoid.

For me, a lot of the fun came from deciding how I wanted to clear a room full of soldiers. Sometimes, a conveniently-placed pot will provide the perfect distraction, or there’ll be a box full of armour that you can chuck a rock at.

Extinguishing an enemy’s light source—by shattering a lantern with a rock, for example—will also rain down hundreds of rats onto their position. Amicia also has a slingshot with a very generous aim assist that flings rocks at enemies’ heads.

It’s a little clunky to wield, and revving it up takes a couple of seconds. Luckily, enemies are believably weighed down by armour and heavy weapons, and they take a while to make their way over to you.

The slingshot mechanic also extends to certain environmental puzzles, like hitting links in chains to drop hanging bodies and provide temporary relief from swarms of rats. The game has a very obvious yellow reticle that pops up whenever you’ve highlighted an object that’s either destructible or flammable, allowing you to clear the way.

A Plague Tale puts a cool twist on crafting and mixes in alchemy, allowing you to craft throwable items like bombs that attract rats or sleeping potions that can bail you out if an enemy grabs you.

You’ll also find materials that you can use to craft upgrades to your inventory or the ability to carry more ammunition. The game’s really generous with materials, so I never felt a huge sense of urgency or like any one resource was more precious than another.

Certain puzzles feel like much simpler versions of puzzles you might find in other AI companion games. There are tiny windows for Hugo to climb through and the occasional crate pushing segment. Puzzles get a bit more intricate later on, when the game has you command another AI companion to herd rats into giant traps. I never got stuck in any of the puzzles, but they were satisfying nonetheless. 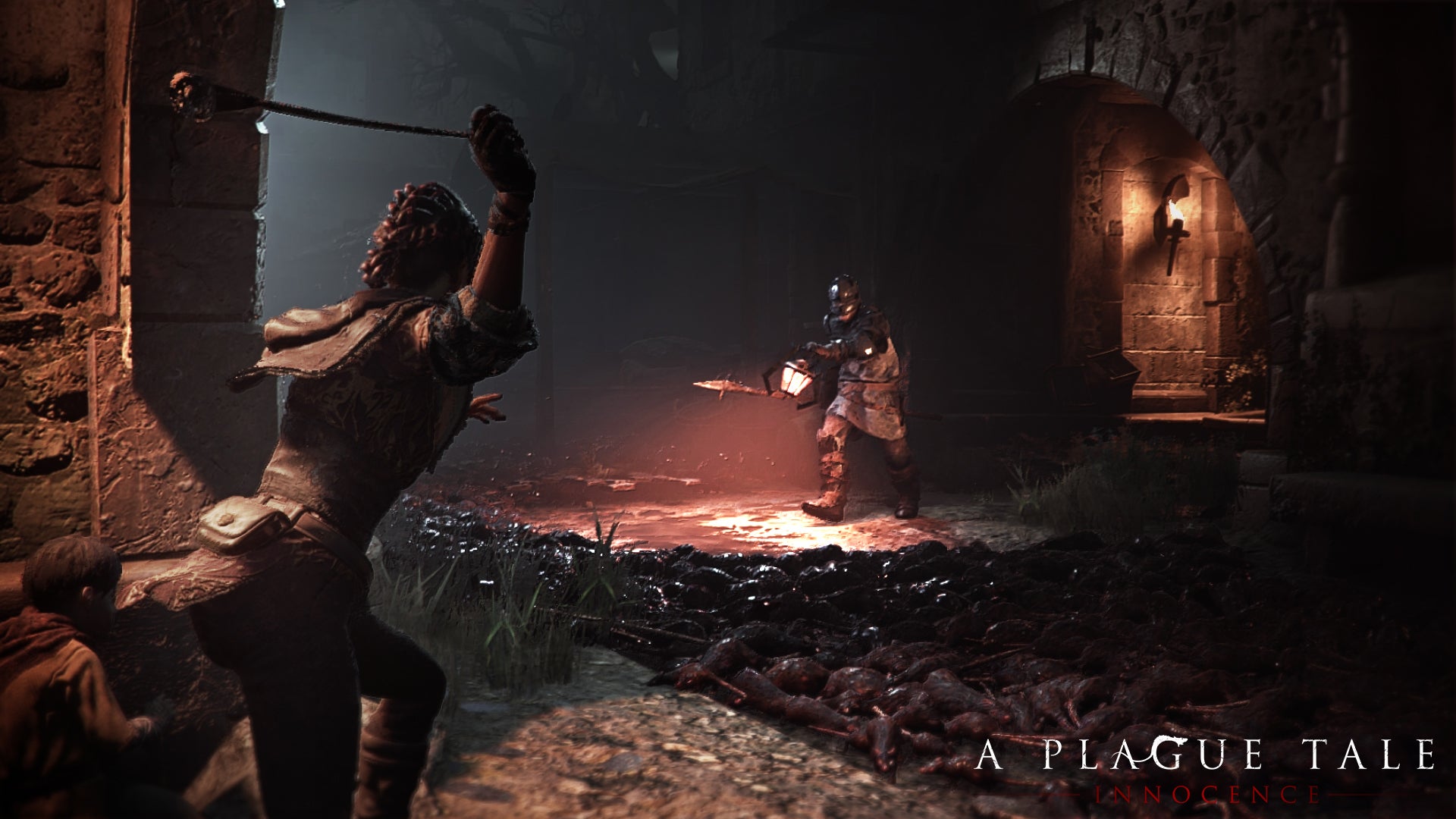 Eventually, the game opens up and lets you tackle areas in whatever way you want. See a distraction? Use it. Want to serve up a knight like an all you can eat buffet to a horde of rats? Have fun. Despite hints at creative freedom, the game’s never too challenging.

Often, the solutions to things are staring you right in the face. But the simplistic design never turned me off.

The story and environments full of castles, churches, and old towns full of rotting corpses were engaging enough that the game felt like a stroll through a really messed up renaissance faire. The narrative is simple and gives the player concrete motivation to continue forward. I wish the antagonists were a bit more fleshed out, but they get the job done.

As heroic and resilient as Amicia is, I do wish certain segments didn’t have her rely on others so much to unlock doors or incapacitate guards with their backs to her. She’s already a strong enough, rock-slingin’ alchemist bad arse, I’m sure she can figure out how to pick a lock.

The game does expand upon some really interesting mechanics later on that I won’t spoil, but trust me, some of them get real wild. I really enjoyed how far the game was willing to lean into the more mystical aspects of the story, while still giving my inner history nerd some interesting moments.

I started up A Plague Tale: Innocence not knowing much about it but found myself intrigued by its world and its characters in no time.

A Plague Tale: Innocence is available tomorrow on PlayStation 4, Xbox One, and PC.