The Best Board Game You Can Play On Your Phone

Phones are of course great to play actual video games on, but they’re also quietly one of the best platforms around to play digital adaptations of board games as well, whether you’re after traditional fare like Monopoly or something more recent, like Pandemic.

And like video games, these adaptations run the gamut from “pretty good” to “why was this released”, sometimes because the game they’re based on sucks, other times because in making the jump from tabletop to phone something gets lost along the way.

We’re not here today to talk about those games though, we’re here to focus on what I think is the very best one out there: Fun Forge’s Tokaido.

It helps that this was a great board game to start with, as anything up for consideration for this title would have to be. I said as much when I wrote about it recently: Tokaido is almost perfectly-balanced, it’s got a wonderfully light and breezy tone, it’s competitive without getting cut-throat, and it’s easy to learn while being almost impossible to master.

Other Board Games, Take Note Of Tokaido's Mobile Port

Luke's written about Tokaido, the lovely board game that's all about having a holiday in Japan. Now that's adorable and all, but the mobile adaptation is stunning in a way that should be a template for other board games.

There are plenty of other great board games available on phones (and computers), though, so what sets Tokaido apart is the quality of its adaptation.

Playing a board game on a phone (usually) lacks board gaming’s direct social interaction, for starters, while also absent is the tangible joy that comes from pushing miniatures around a table, collecting tokens and rolling actual, cold dice out of your hands. 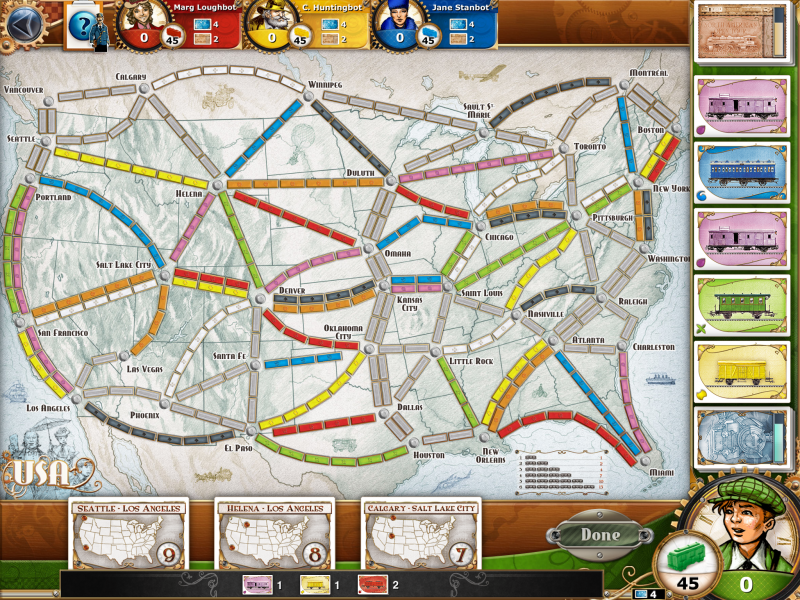 Ticket to Ride’s digital version looks...just like the regular version.

The vast majority of digital board games simply seek to take a board game, layout and all, and dump the same action on a screen without accounting for everything that’s been lost along the way.

This can be handy for serious fans of a game, or anyone trying to learn rules, but when there’s a universe of actual video games out there, playing a board game that still looks and feels like a board game seems … weird.

I get it that these are often great games, with legions of fans and great systems and all that, but video game platforms – even the humble phone and tablet – can do so much more.

Tokaido knows this. It takes its near-perfect board game experience and disguises itself as a video game. It’s not the only game to do this, I know, but it’s the best of a small bunch. The systems and beating heart of the game are still there, but a static map has been replaced by a scrolling Japanese countryside, player tokens are now fully-animated avatars and stores and temples now resemble RPG storefronts rather than just decks of cards.

Tokaido on mobile commits 1000% to its theme, while sticking true to the art design of its original version. The relaxing Japanese music, colour scheme and sound effects are all a perfect extrapolation of the feel of the board game, while actually seeing your panoramas come to life with swirls of paint, or characters marching along the Tokaido is a blast.

This stuff isn’t just cool to see in its own right, they go some way to making up for the things Tokaido loses by leaving the physical world behind. In fact the more video-gamey layout here is an improvement in many ways, because Tokaido is a game that requires you to collect a lot of cards, and laying them all out can get messy; here your stuff is all streamlined and taken care of in an inventory screen, freeing the main view to show just the essential game information (and look gorgeous without cards cluttering your view, like so many other board game adaptations rely on).

Tokaido takes a game I already thought was almost perfect and brings the same core experience to phones and tablets, only now it takes advantage of their media and processing capabilities.

This is how board games should be adapted. I realise not every publisher can afford it, and for many players a literal adaptation of something like Caracssone is all they want, but Tokaido shows that board games in the digital realm can be so much more when a little extra effort is put into them.