The Fun Story Behind An Avengers: Endgame Cameo You Probably Didn’t Notice

There’s a scene about a third of the way into Avengers: Endgame that has three levels of surprise. Two of them, everyone gets. But the third one is only for a very select group of people: fantasy football players.

Think back to when Iron Man, Captain America, Ant-Man, and Hulk go back to New York 2012, the setting of the first Avengers movie. Present-day Iron Man and Ant-Man follow the 2012 Avengers as they leave Stark Tower with the Tesseract, hoping to create a diversion to steal it. The Avengers are then stopped by Alexander Pierce, played by Robert Redford, who is trying to take the Tesseract for SHIELD.

Surprise one for viewers (though some might have guessed) was that Endgame visited The Avengers Back to the Future Part 2-style, and part of their trip acts almost as a deleted scene from that first team film. Surprise two is Redford, one of the greatest, most recognisable actors ever, reprising his role as the now-deceased SHIELD-turned-Hydra operative Pierce.

Then there’s that third surprise for a small niche of people. It’s the agent standing next to Pierce. He’s played by the Talented Mr. Roto himself, ESPN’s Matthew Berry. 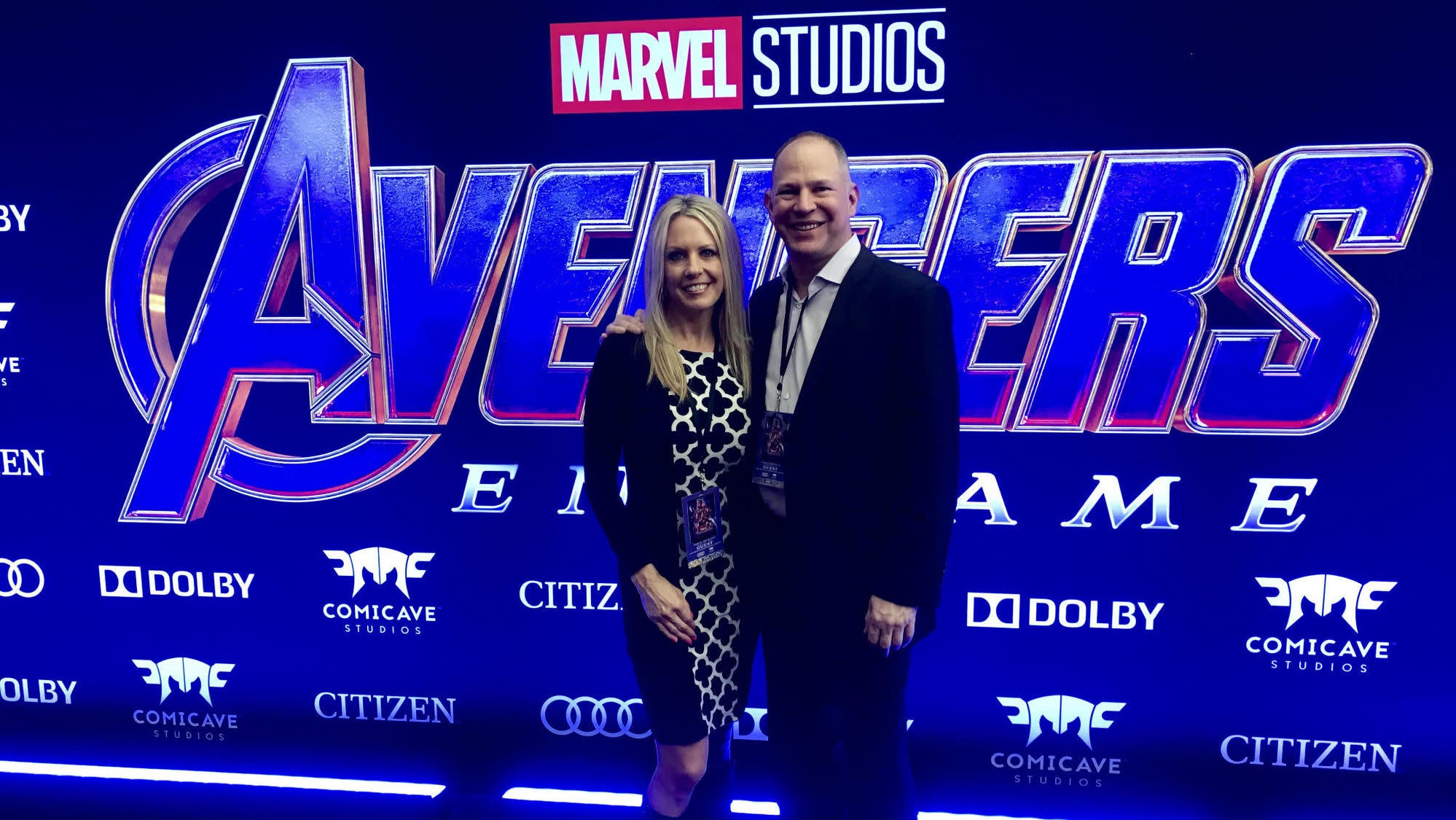 Beth and Matthew Berry at the premiere of Avengers: Endgame on April 22 in Los Angeles, CA. (Photo: Matthew Berry)

Berry, if you don’t know, is one of ESPN’s most famous and followed experts on fantasy sports. He’s on TV almost every day talking about it and has a huge presence on social media too. If you play fantasy sports, especially fantasy football, you’ve probably encountered Berry before.

So how the hell did a fantasy football expert find himself in a huge, secret Avengers scene along with the likes of Redford, Robert Downey Jr., Chris Hemsworth, and Tom Hiddleston?

“It happened through the grace of Joe Russo,” Berry told io9 on the phone this week.

According to Berry, he and Joe Russo, one of the film’s co-directors, became friends through fantasy football. “He’s been reading my column for years and he’s a big fantasy football player,” Berry said. “And about two years ago he gave me a call and said ‘Hey man, I got a part that I think is perfect for you if you want to be in the movie’. And I was like ‘Yeah of course,’ obviously.”

At the time, all Berry was told was he’d playing someone “official” and that the scene would be with Iron Man, Thor, and Hulk. Next, a person from the costume department called him to get sizes for a suit, which made him think he was a detective or something (because he believed SHIELD didn’t exist anymore). Finally, when he got on set in Atlanta in late October/early November of 2017 (the week Thor: Ragnarok opened), he got to a few script pages….after signing a ton of NDAs of course. 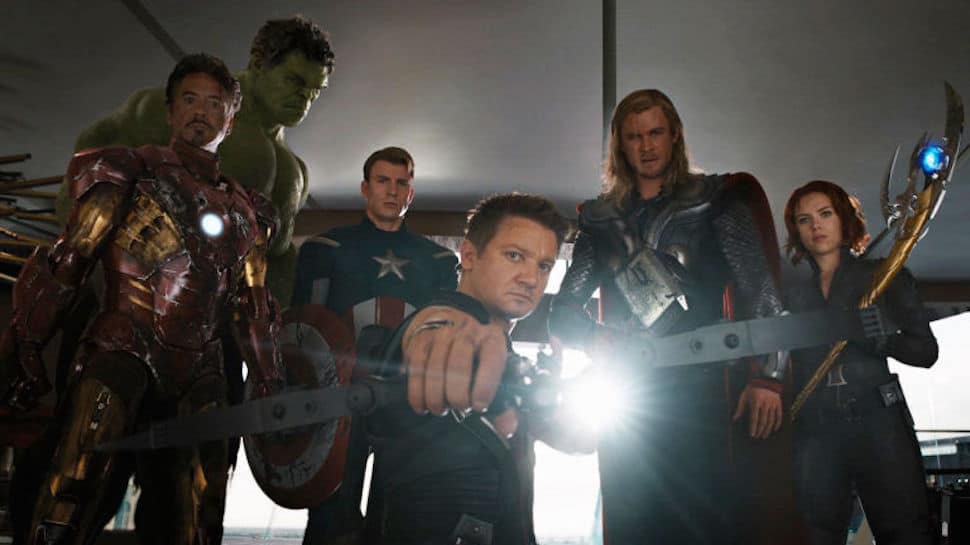 Matthew Berry pops up after this moment. (Image: Disney)

“They hand me the script, it’s like two pages…and it makes no sense to me,” Berry said. “All it is is the dialogue. I see dialogue between Alexander Pierce, my character, Tony Stark, and Thor. Then you see like one or two lines from ‘Other Tony’ and I’m ‘What the heck is ‘Other Tony?’”

Remember, this is before anyone had even seen Avengers: Infinity War.

Berry didn’t know what Thanos had done. Nor did he know what the Avengers had to do. The answers were coming, but not for a few hours. First, he’d have to get over the shock of meeting not just Downey Jr. and Hemsworth (as well as Hiddleston and Mark Ruffalo), but a living Hollywood legend no one knew was in the movie.

“Of course, Chris and Robert [were great] and then Robert Redford walks in,” Berry said. “So inside it’s like ‘Oh my God’ because ‘Holy crap, it’s Alexander Pierce.’ And then the second piece of ‘Holy crap’ is ‘I’m going to do a scene with Robert Redford!’”

“Forget actors. Forget movie stars. I’m surrounded by iconic legends,” Berry continued. “I mean I’m in a frame with Robert Downey Jr, Robert Redford, Chris Hemsworth, and me. Like one of the shots in the movie is literally just four of us. That’s bananas to think about.”

Even more surreal was how Redford’s appearance helped cue Berry into what the hell was going on in this secretive scene he was shooting. 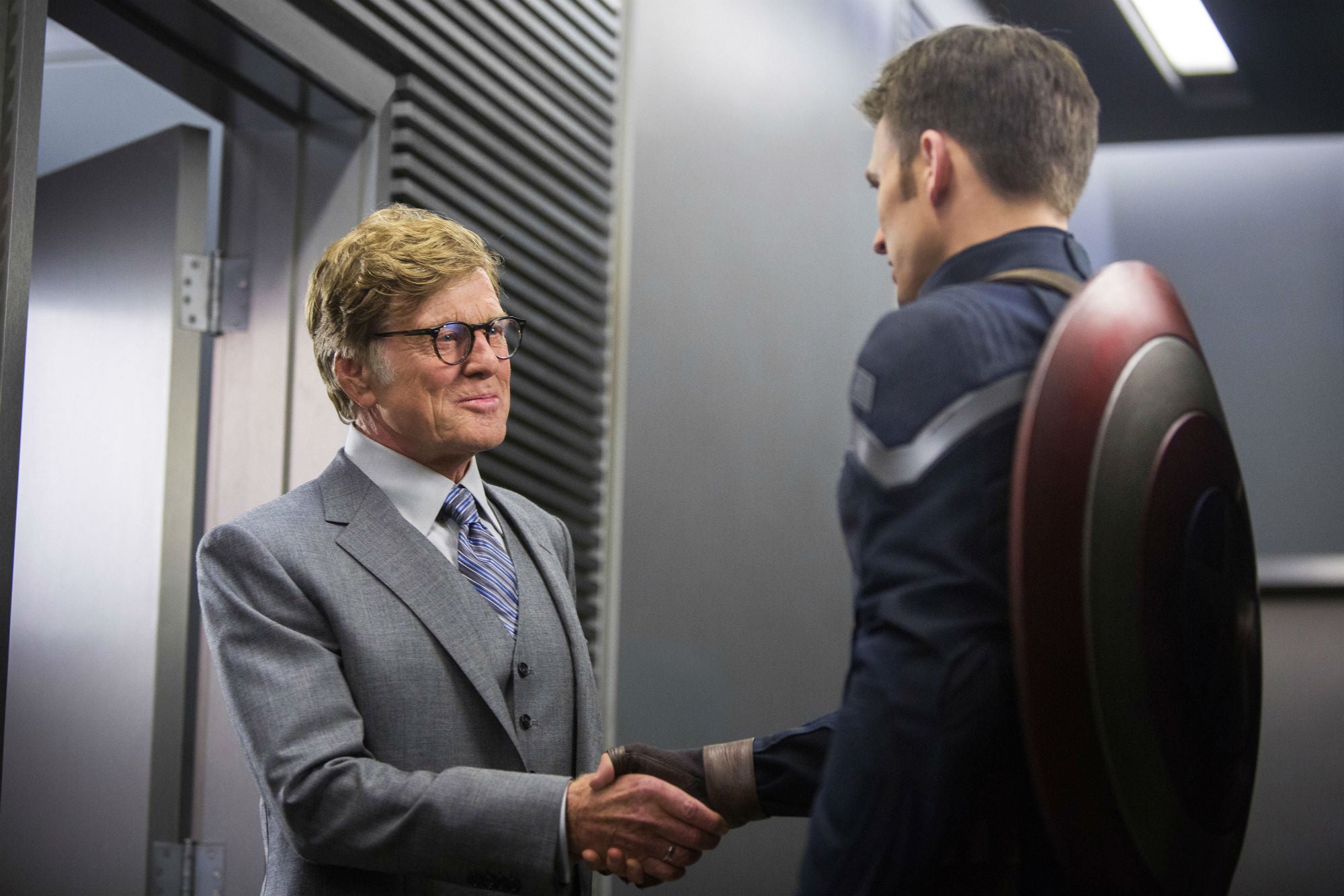 He’s back and he’s bad as ever. (Image: Disney)

“I [realised] I’m in the lobby of Stark Tower. They’re wearing what they were wearing in The Avengers. Clearly, it’s either a flashback or it’s time travel,” Berry said. “Also Alexander Pierce is there. He’s dead. So, I also realise ‘Oh I must be Hydra.’”

Berry said Redford’s cameo was considered to be the secret among secrets for the scene and was told that, ideally, he shouldn’t tell anyone anything about the movie. Or even that he was in it all. But, if he was to tell family members, he could not mention Redford. Which he didn’t. “My wife didn’t even know,” he said.

After the initial shock of the moment’s magnitude wore off, Berry slowly felt at ease working on the scene, which he credits to the calming and welcoming environment the Russos create on set. They filmed the scene for two days and, even though he felt more comfortable as things moved on, there was still a hint of fear.

“If Robert Downey Jr. looked at me sideways and said ‘I’m not feeling this’, I’m not in the movie, right?” Berry joked. “Which, by the way, you would understand. If an actor said ‘Yeah listen. This is a major movie and he’s like an ESPN fantasy football guy. All due respect, I don’t want to be a jerk here but can we do a little bit better?’ You’d get it. [But] it was just the opposite. They couldn’t have been more welcoming and more encouraging.”

One example was what happened as everyone broke for lunch. “Downey turned to me and said ‘You’re doing very well,’ Berry said. “He said, ‘Don’t take this the wrong way, but you look like a SHIELD agent.’ And I said, ‘Robert, coming from you that’s an amazing compliment. I will take that. Thank you very much.’”

“Robert Downey Jr. is everything you hoped he would be and so much more,” Berry added. “There’s literally nothing in the world I wouldn’t do for that guy.” 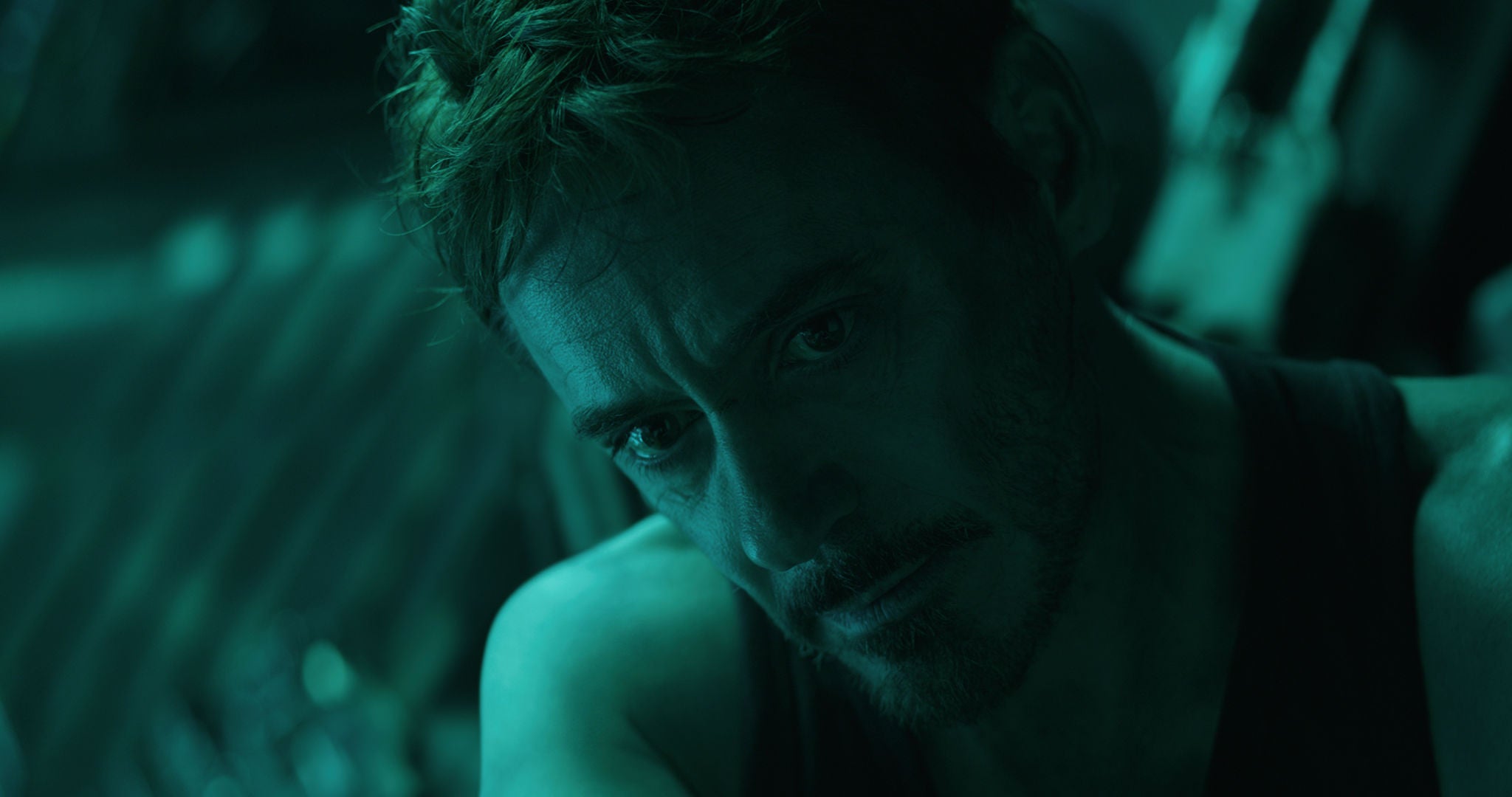 Eventually, Berry was so into what he called a “great collaborative process,” he even helped to build a fairly memorable moment in the film.

“There was a moment where they’re like ‘OK. Tony’s just fallen. Ad lib as you would normally do,’” Berry said. “We did that fall like four or five times with different reactions to it. The last couple of times I turned to Thor and I’m like ‘Don’t you have a magic hammer?’ or something like that. I forget exactly what I said two years ago but I said something to the effect of ‘Use your hammer to help him out.’ And so Thor tries and obviously it works and that ended up staying in the movie. They cut my line which, truthfully, [makes it] a better moment. Thor doesn’t need the SHIELD guy’s suggestion.”

One place Berry did struggle with was how to deal with the burden of keeping this incredible experience a secret. “It was awful,” he said, citing the fact he had to go through two years of not just Endgame talk and speculation, but Infinity War too. Only a few people who didn’t work on the movie knew he was in it, which included some of his bosses at ESPN. Since the scenes shot in the middle of football season, it took some significant string-pulling for him to make it to set.

“There were like five or seven people at ESPN that knew about it,” he said. “So when Infinity War came out, and some of them aren’t big MCU fans, they’d be like ‘Hey is this the one you’re in?’ And I said ‘No. 2019.’ So yeah I was counting down the days until it was out.” 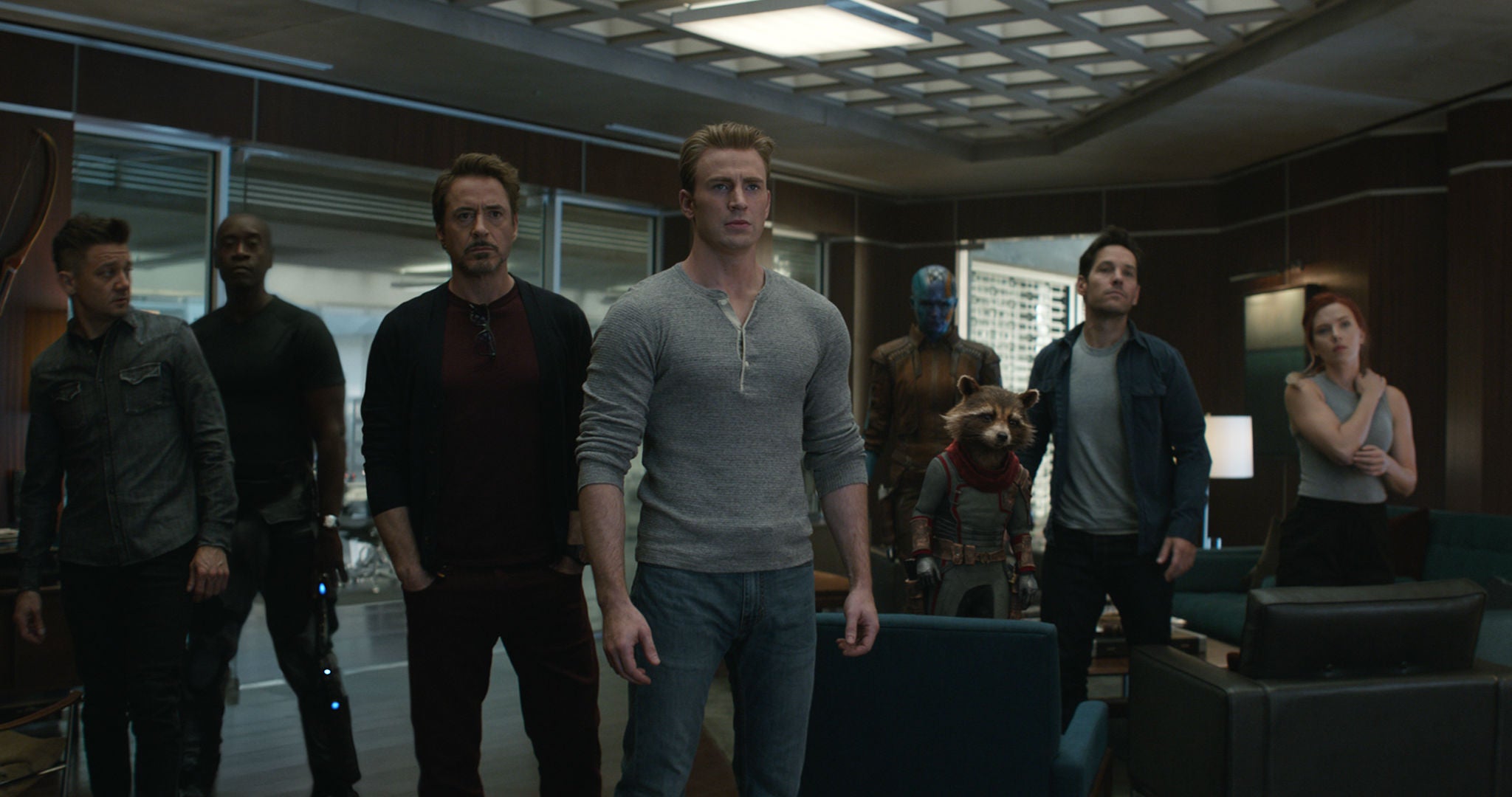 Imagine being part of this group. (Image: Disney)

Since the release of the film, Berry has been enjoying all his family, friends and fans who have noticed the cameo and reached out. And yet, he thinks it’s almost better when people don’t notice.

“There’ve been people that know me, that have seen the film, and didn’t realise I was in it,” Berry said. “I take that as a compliment. I mean the scene is about Tony Stark and Thor running into Alexander Pierce while they have Loki and the Tesseract. That’s what the scene is about. You don’t want anyone to take you out of that moment. The fact that they just go ‘Oh look. There’s a SHIELD guy there’ makes me feel like I did a good job.”

As for what may be next for Alexander Pierce’s number one SHIELD operative, if he didn’t die in Winter Soldier of course, Berry is ready to bring him back. “I love being part of the MCU,” he said. “Hey, Marvel! Let’s turn this into something really cool. There’s a Disney+ series in there somewhere.”

Avengers: Endgame is now in theatres.