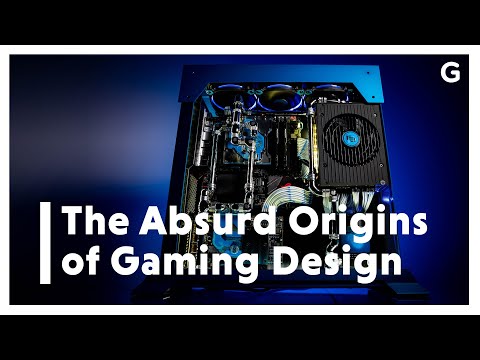 Over the last few months, we’ve spoken with laptop makers, gamers, and historians to get a better understanding of the gamer aesthetic. You know what I’m talking about: Blinking lights and sharp angles. Computers that look like they fell off an alien spaceship. Crucially, we wanted to know how we got this gamer aesthetic to begin with, and what is going to happen to it as gaming becomes more mainstream. In the video above we examine the aesthetic’s history and its future.

The history might surprise you. Most of us know someone who identifies as a gamer, and we know that that identity is only partially about the act of playing video games. It’s a lifestyle more than a simple expression of a hobby, and those who embrace it wrap their arms lovingly around the aesthetic.

You can trace the origins back to ad campaigns for the Sega Genesis in the early 90s. The company wasn’t selling consoles as well as rival Nintendo wanted to set itself apart. Where Nintendo was family-friendly and wholesome, Sega started to market the Genesis as a dangerous alternative fit for cool young guys who scoffed at authority and could handle blood and guts in their games (or a fast blue hedgehog).

The Dreamcast would be marketed to these kids in a similar fashion. Same with the PlayStation. By the time the Xbox launched in 2001, that identity had crystallised.

Alienware was one of the first PC makers to market specifically to that new gamer identity. Alienware made a name for itself in the late 90s creating powerful gaming PCs, but at first, they still looked like every other beige box—designed to be innocuous and non-threatening. In 2003 Alienware created a new design language for its PCs.

These new laptops and towers were festooned in colourful plastic, with accent lights and aggressively alien designs. Up until that point, the only real and consistent outlier in PCs was Apple. No one was making a Windows-based computer that looked like what Alienware was producing. It quickly became the inspiration for PC makers who wanted to tap into the gamer market, and even today, its designs inspire other PC makers.

In 2011, Razer slid into the gaming laptop market with the Blade, upsetting the balance and providing a sleek alternative to Alienware. Razer laptops are thin (relatively speaking), the lights are a little more subdued, and the design is a little less aggressive. That lack of perceived aggression in the design—and the improved portability versus a 5cm thick laptop from companies like Alienware or MSI has made Razer laptops popular. And they’re not just popular with consumers. As with Alienware, Razer devices have inspired other PC makers to design devices that don’t aggressively scream gamer quite so much.

The shift is happening—whether gamers like it or not. As gaming continues to grow more and more hardware makers are going to try to appeal to the broader market. Which means the schism between thin and light and bulky and powerful will continue to grow.