There Are Some Decent Card Games On The Switch, And More On The Way 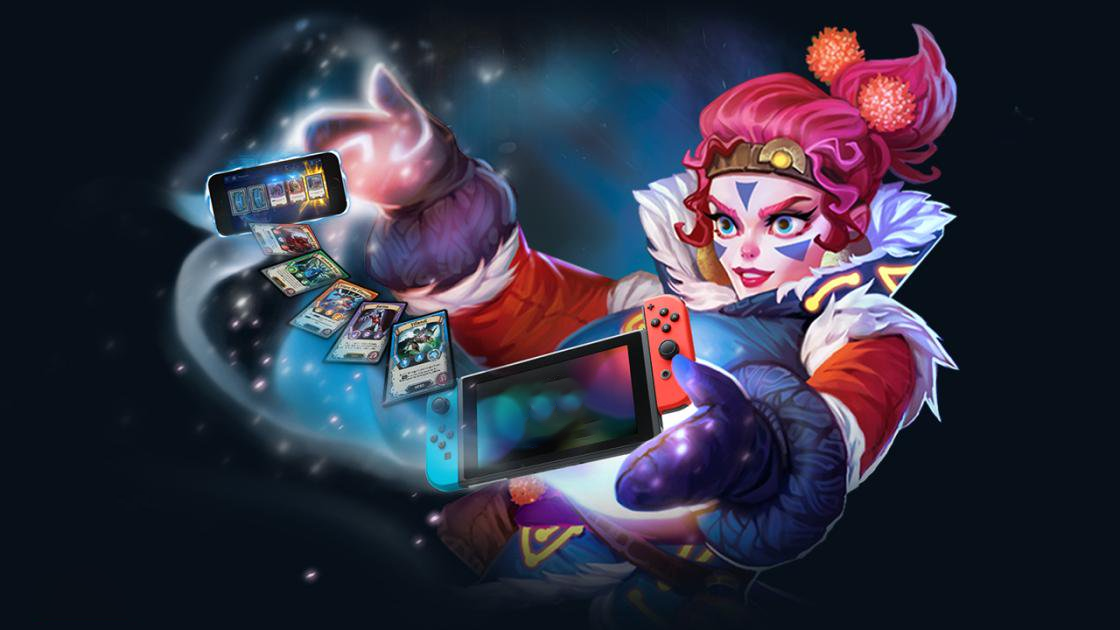 Hearthstone, The Elder Scrolls: Legends, and Gwent are nowhere to be found on the Nintendo Switch. While it’s unclear what’s holding the biggest digital card games back from the platform, their absence has opened up space for a handful of other decent card games.

Despite being a perfect match for the Switch’s touch screen and portability, Blizzard lead game designer August Dean Ayala confirmed last year that the studio had “no plans” to bring Hearthstone to the Nintendo device.

CD Projekt Red’s Witcher-based card game Gwent hasn’t made the jump to the platform, either, despite already being on PS4 and Xbox One and heading to iPhones later this year.

Even The Elder Scrolls: Legends, Bethesda’s take on the genre, remains MIA, even though the company announced last E3 that it would arrive on Switch before the end of 2018.

As a result, the card-game space on Switch has been ceded to other developers—and they’ve been doing a pretty solid job. One of my favourite games right now is Lightseekers. It’s a more stripped-down version of the two-players-hurl-spells-and-monsters-at-one-another-until-somebody-dies formula established decades ago by Magic: The Gathering.

But what it lacks in strategic depth it makes up for with a fun mechanic that drastically changes up the normal rhythm of a duel-style card game. 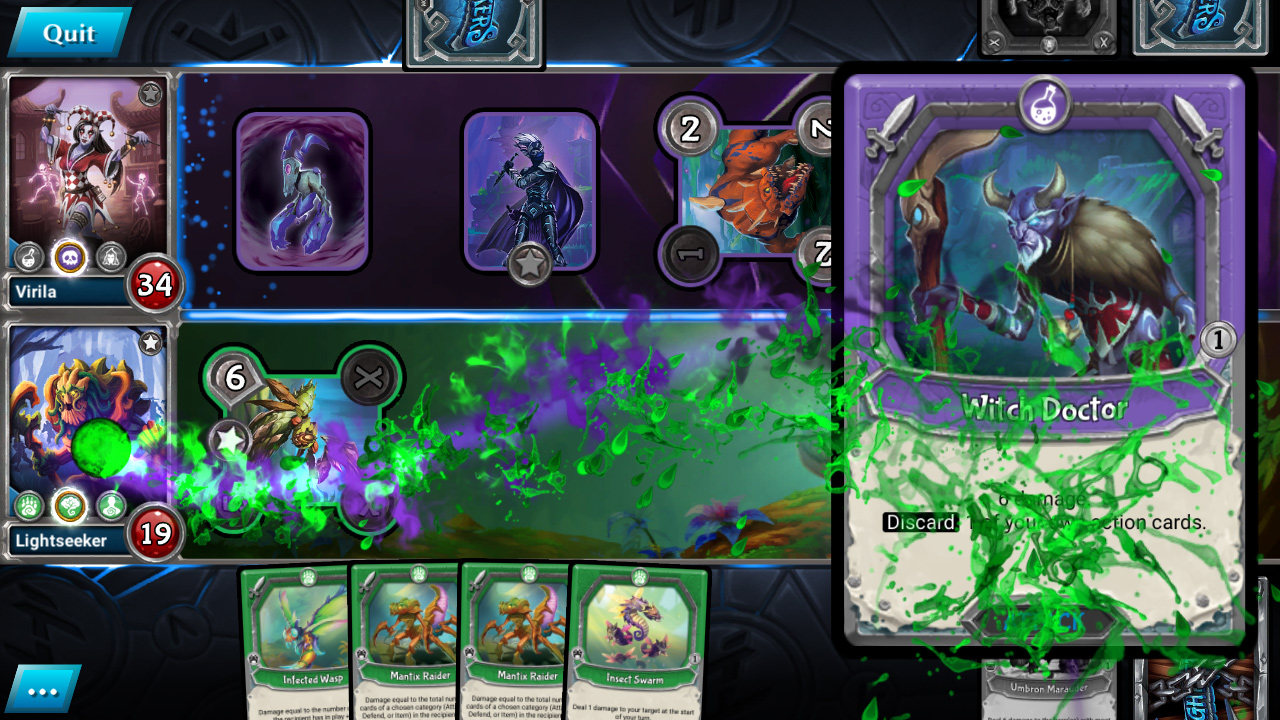 In Lightseekers, certain cards rotate 90 degrees and produce a new effect each time. Regen Chamber, for example, is a buff card that heals you two points at the start of every turn and rotates any time you take damage.

Once any rotating card has spun through all of the positions once—some cards have effects on all four sides, others fewer—it’s discarded from the battlefield. Rather than just producing an army of monsters to overwhelm your opponent with, playing Lightseekers is more like designing a clock that you then set into motion and watch unwind.

Lightseekers is the card-game part of a larger toys-to-life game originally Kickstarted back in 2016. As a result, there’s both a physical and digital version of the game. One of the coolest parts is that you can actually use a mobile app to scan your physical Lightseekers cards and then get them added to your collection in the digital game.

When it came to Switch earlier this year, it carried this element over while also allowing cross-play with the PC and mobile versions. 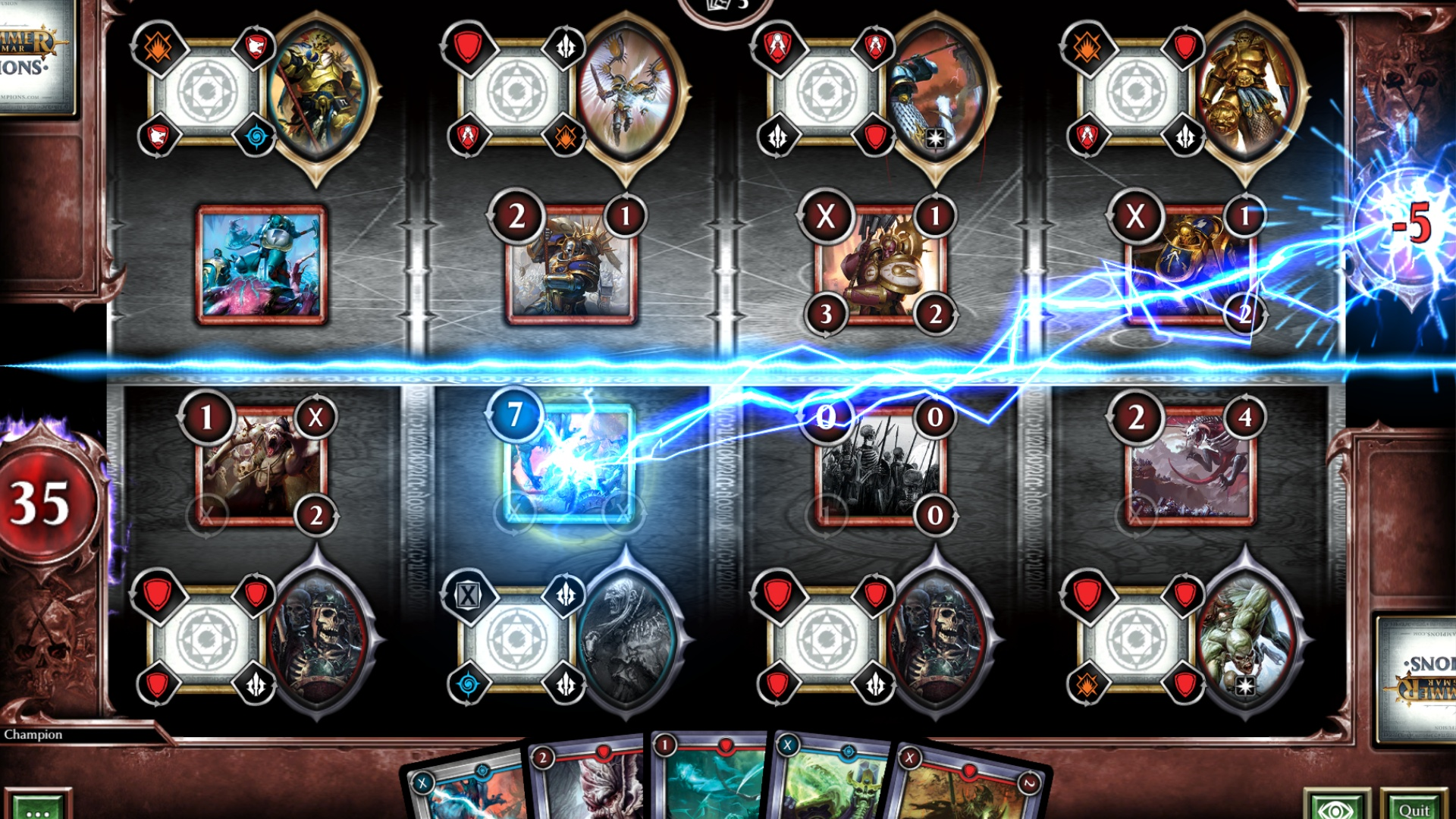 The Makers of Lightseekers, PlayFusion, recently ported another card game to the Switch: Warhammer Age of Sigmar: Champions. It also allows cross-play with other platforms and similarly allows you to share cards between the physical and digital versions.

The game also takes advantage of the rotating card mechanic, but with a few more loose ends to consider that draw on the series’ strategic, tabletop roots. It’s a nice alternative if you want more to chew on than Lightseekers and prefer the grim dark aesthetic of the Warhammer universe.

And then there’s Frost, a survival card game where you fight off wolves and the cold as an icy storm chases your tribe across the tundra. Unlike other card games, Frost is a single-play adventure that functions more like a hybrid of Frostpunk and Slay the Spire.

You build up your deck as you play, gaining more options to fend off hunger, traverse mountains, and keep rival tribes at bay. There’s almost never an optimal strategy, though–only less bad ones. Toward the end, survival might mean risking starvation or sacrificing some of your fellow tribesmen altogether.

As each playthrough is randomly generated, it’s easy to keep returning whenever I have a spare 15 minutes and just want to sink into the game’s melancholy-but-harsh, hand-drawn aesthetic and confront the elements rather than participate in the faceless grind against online opponents in other games. 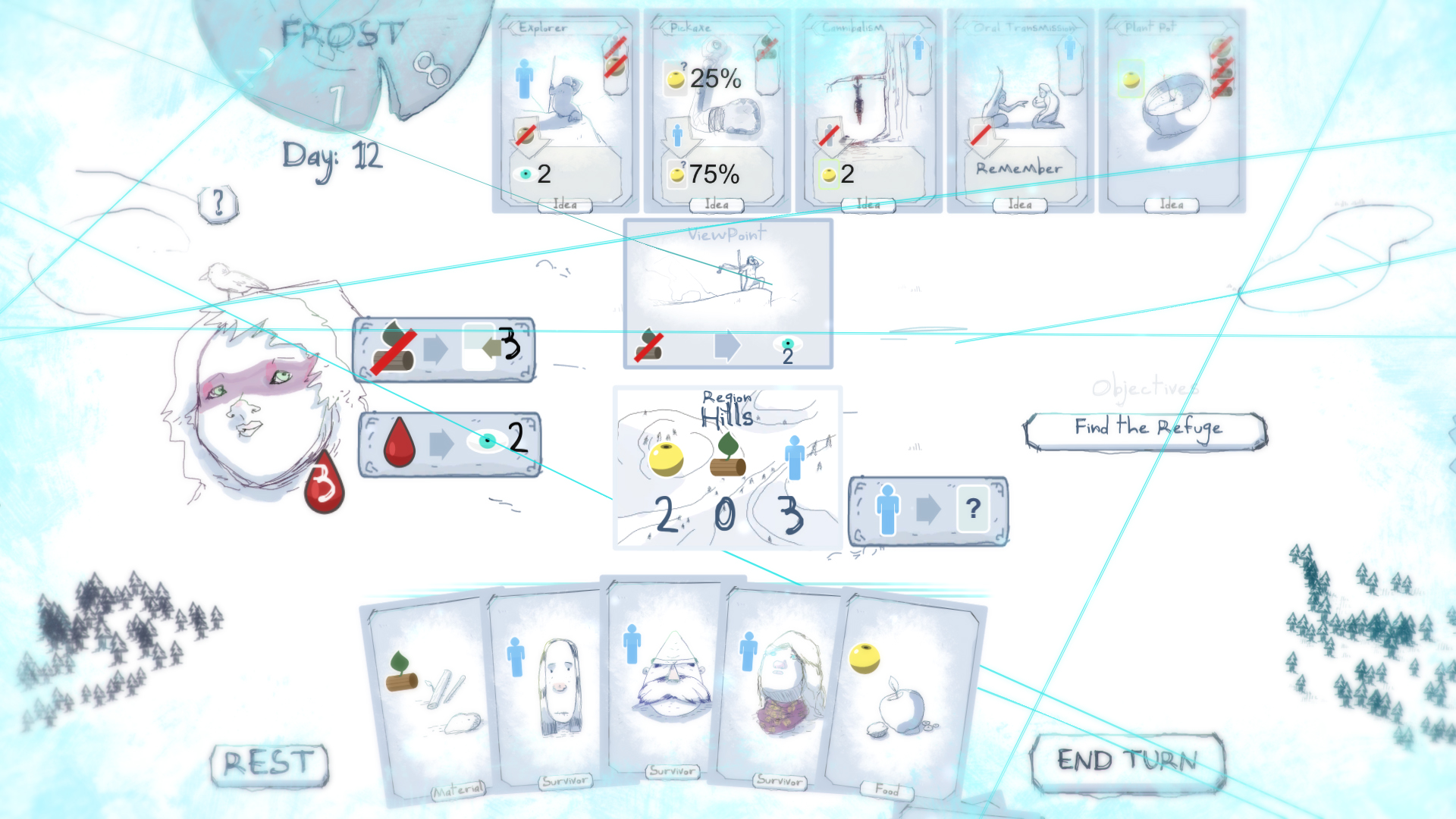 The Switch has other, even weirder card games. Shephy is a bizarre take on solitaire using a deck made of cards about sheep. There’s also Hand of Fate 2, an excellent card-based role-playing game reminiscent of D&D that came out in the Switch’s first year.

And even if the most popular card games, including the Pokémon Trading Card Game Online, are nowhere to be seen, there are plenty of other interesting ones coming down the line. Slay the Spire is due to get ported to the Switch later this year, as is the excellent The Lord of the Rings: Living Card Game, currently in Early Access on Steam.

There are even some card games being crafted specifically for the Switch. The one I’m most excited for is a recently Kickstarted project called Malkyrs: The Interactive Card Game.

It aims to take advantage of the NFC chips in the Joy-Con with a library of physical cards that can then be directly transferred into the game. As someone torn between the ease of playing Magic: The Gathering’s latest expansion digitally in Arena and actually buying a box of booster packs to draft locally with friends, it’s been great to see developers on Switch try to bridge that divide.

I’m still desperate to see Hearthstone, Gwent, and the rest one day make it to Switch, but in the meantime the console has proven to be a great place to explore a world of cards beyond those games.