Three Of The Most Obscure Transformers Have Been Modernised For 2019

The Firecons are far from the best-known Transformers ever made. Released in 1988, the little robots that turned into spark-spitting monsters were nobody’s Optimus Prime, Megatron or Omega Supreme. And now, suddenly, 31 years later, they’re making a comeback.

Flamefeather, Cindersaur and Sparkstalker are returning in remade form in the upcoming Siege expansion to the Transformers Trading Card Game. They’re a deep cut, something that card-makers Wizards of the Coast dug into for the purposes of filling out a roster for the first wave of the new Siege expansion.

“The number of character cards we needed to fill out this set was higher than is realistic to expect from a toy line, so we worked with Hasbro’s Transformers creative team to select characters who were not in the toy lineup to include in Siege I,” Transformers TCG brand manager Drew Noscolo said.

“We like peppering some relatively deep cuts into each set, so some of these additional characters are fairly obscure. In wanting to give the Decepticons some beefy reinforcements, we found a great opportunity to include some characters from further down the bench.”

“There was one fairly significant issue, though: the Firecons did not have preexisting designs for Siege,” Noscolo said. “We spoke with the team at Hasbro and were granted the opportunity to spearhead a redesign effort for all three Firecons. This set marks the first time we’ve been able to do this, and it’s a very cool chance for us to add to the already impressive Siege story.”

So they picked these guys. From left to right, that’s Flamefeather, Cindersaur and Sparkstalker. Sold for around $US3 ($4) apiece back in the day, these Firecons featured a friction motor that shot sparks from their monster-mode mouths. I’ve been a huge Transformers fan since the toys and cartoon debuted stateside back in 1984, but the Firecons live in the hazy corner of my memory.

By the time they showed up in 1988 alongside their Autobot counterparts, the Sparkabots, my interest in the series had waned. Hasbro was releasing weird sub-groups of Transformers like the Pretenders (robots in biological shells) and Micromasters (tiny, less complex robots). They didn’t do much for me. And then I discovered girls. Girls were super interesting. And so I missed out on these three freaks. 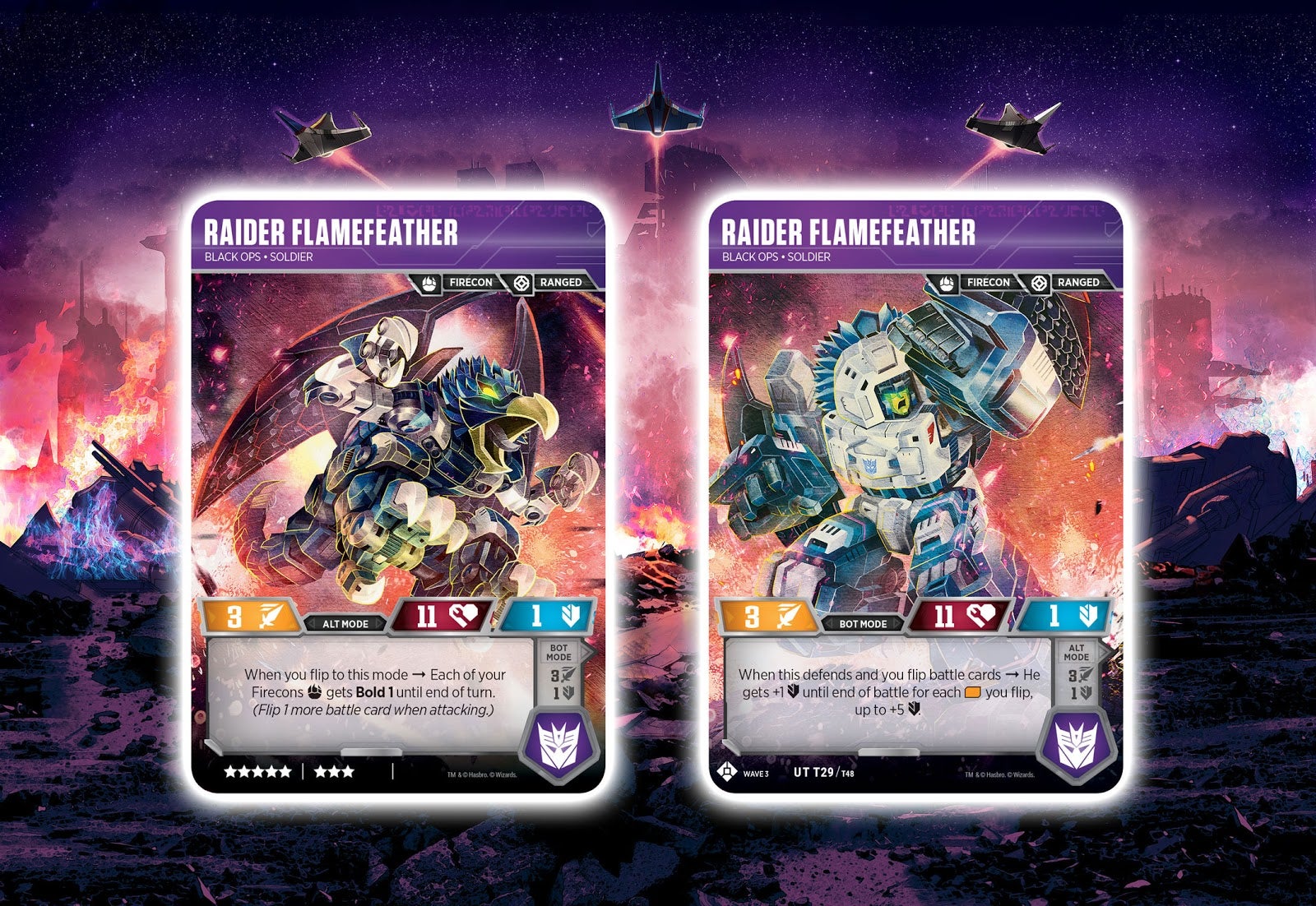 The Firecons were redesigned by excellent Transformers artist Marcelo Matere, with Volta handling backgrounds. All three of the original Firecons had robot modes that were these tiny robot heads within a bulky shell.

Matere stuck with those trademark bulky robot forms, while making the beast modes look much more savage than the toys ever did. Flamefeather’s 1988 toy looks like a duck. Matere’s redesign, seen on the card above, looks like a fierce crow, maybe, or at least a much angrier duck. It’s a marked improvement. 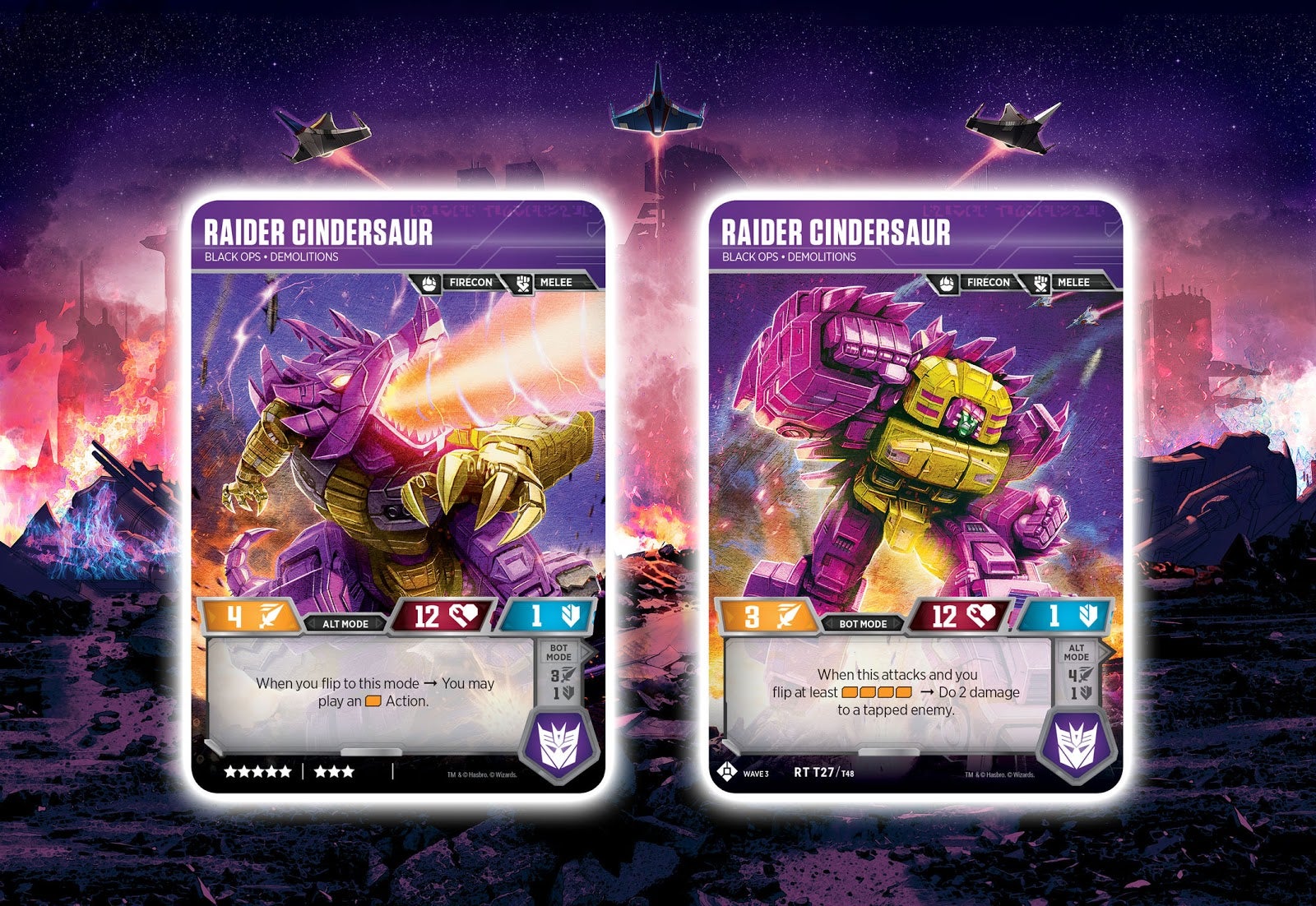 The Firecons are about as far down the bench as one can go. So far down that aside from a couple of redecorated toys sporting the name Cindersaur, no one has seen or heard from them since recolored European exclusives were released in 1994. With no toy counterparts in Hasbro’s ongoing Transformers: Siege line and no recent reference material, the trading card game team had to redesign the power trio themselves.

The Siege cards mark the first time they’ve been given permission to spearhead a redesign of classic toys, and I can’t imagine three toys in more desperate need of a redesign. 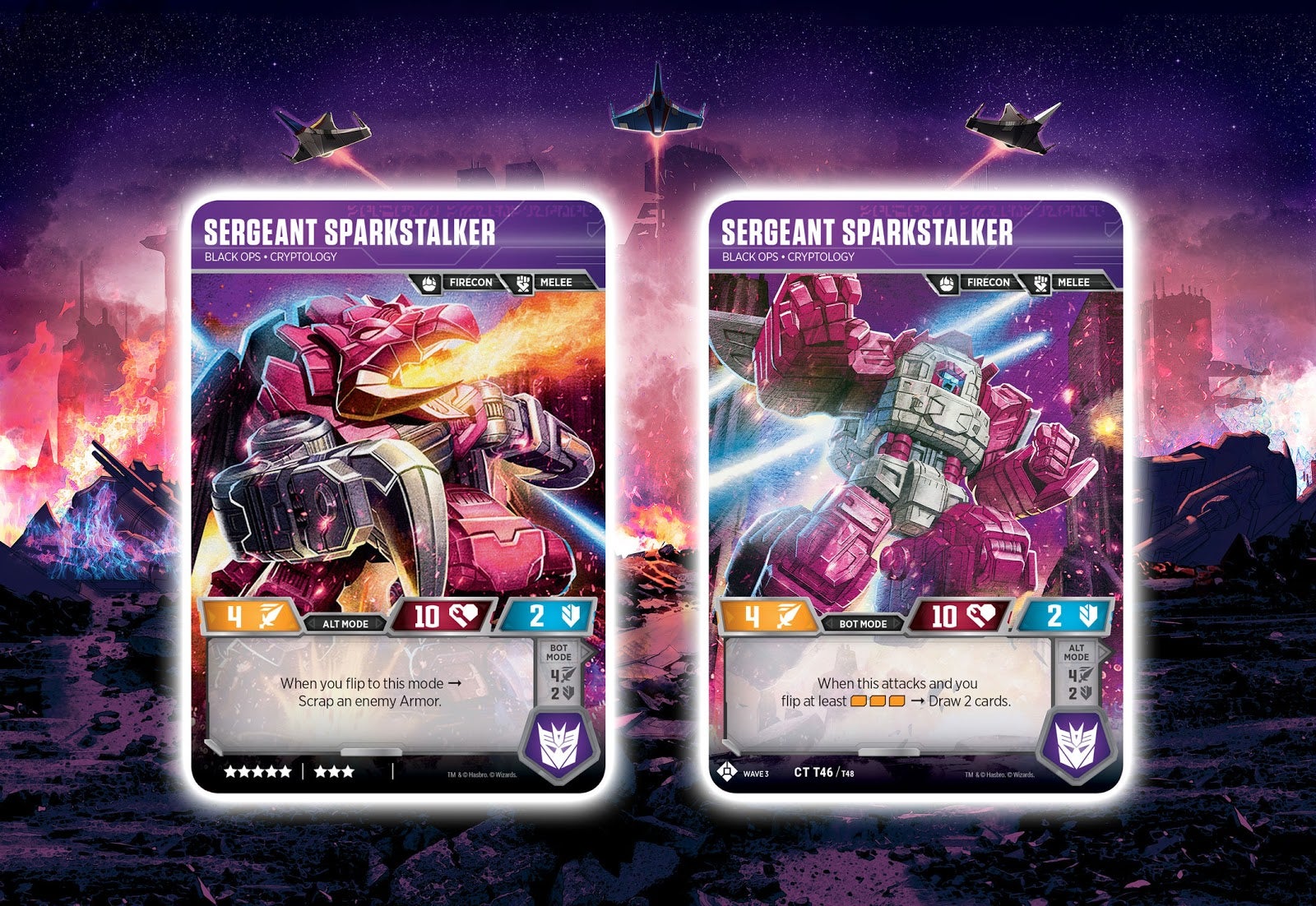 The original Firecons are small, cheap, ugly and not very memorable. They’re the kind of Transformers I’d see at a fan convention and spend a couple of minutes trying to place. Aside from some quick appearances in the North American and UK versions of Marvel’s Transformers comic book, the Firecons came and went without much fanfare.

Cindersaur, Flamefeather and Spartstalker make their triumphant return to the Transformers universe via the trading card game’s Siege expansion internationally in June. Who knows, maybe we’ll get new toys of the characters so we can forget who they are all over again.