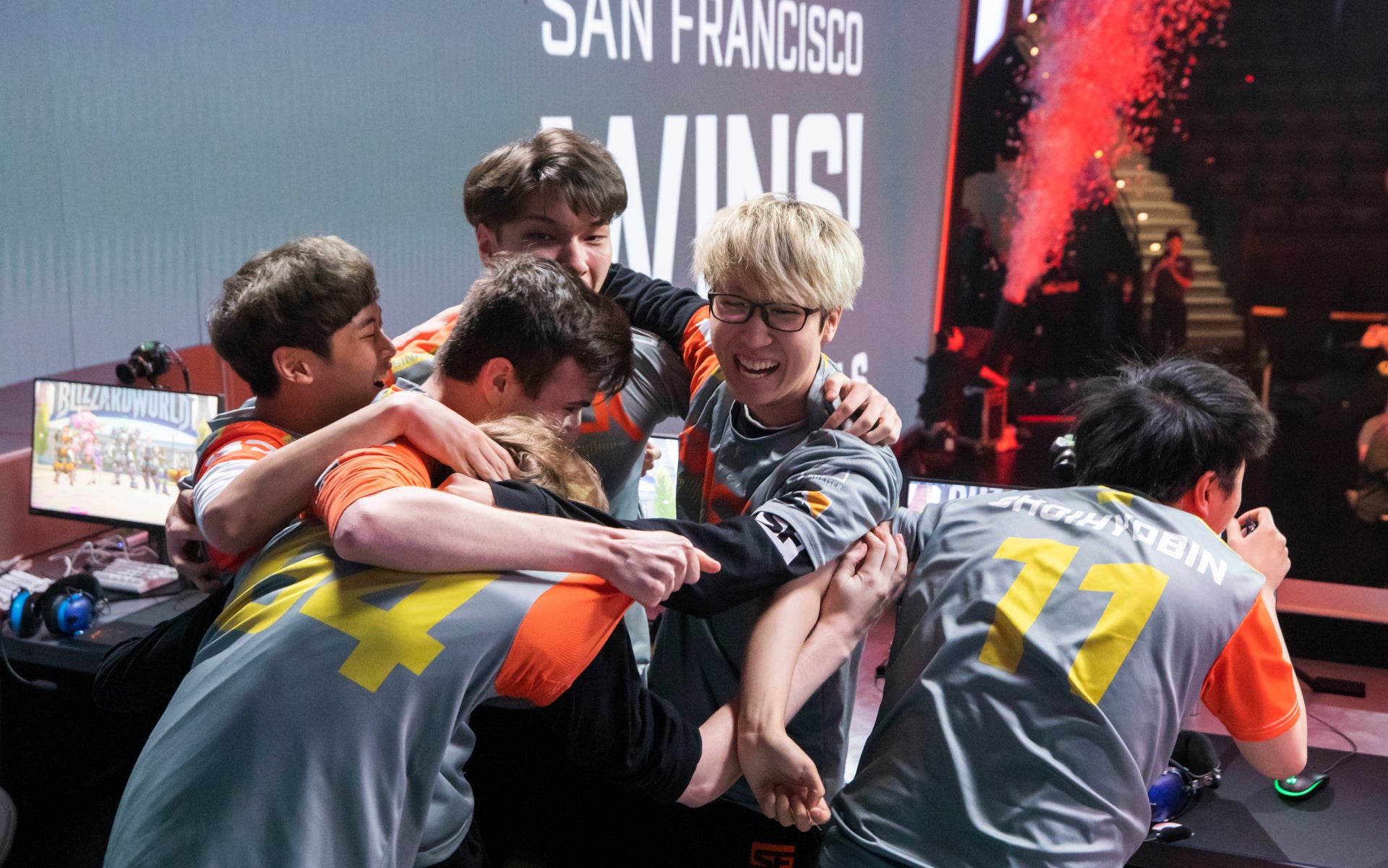 Photo: Robert Paul, Blizzard Entertainment
To sign up for our daily newsletter covering the latest news, features and reviews, head HERE. For a running feed of all our stories, follow us on Twitter HERE. Or you can bookmark the Kotaku Australia homepage to visit whenever you need a news fix.

For the San Francisco Shock, locking up the first perfect stage in Overwatch League history was a nice cherry, but the team always had their eyes on the sundae: victory in Sunday’s stage two playoffs. Yesterday they once again faced off against Vancouver Titans, running back the stage one match-up that they lost (in what was the most thrilling match of season two so far). The Shock fought for their honour — and also, $286,706. This time, they succeeded.

Both San Francisco and Vancouver have been on absolute tears this season, with the former pulling off the aforementioned perfect stage. The Shock managed to not drop a single map for five weeks. Meanwhile, the Titans hadn’t lost any matches all season long going into yesterday’s stage two finals. With season one boogeyman team New York Excelsior looking like a wobbly baby Bambi version of itself any time the pressure’s on and, crucially, losing to Vancouver Titans in an earlier playoff match, it’s become clear that San Francisco and Vancouver are the new top two teams in the league. Watching them play against each other, then, is a guaranteed treat.

Yesterday, both teams brought it, but San Francisco brought it more. Straight out of the gate, they made a statement by preventing Vancouver from securing a single point on the match’s first map, Lijang Tower. That dominance did not last, however, with Vancouver keeping their composure and battling back with supremely smart plays like this counter-Earthshatter ult from tank player supreme Sang-beom “Bumper” Park:

With the score tied at 1-1, San Francisco got to pick the third map and chose Paris. This should have given them the upper hand. It did not. When it comes to triple-tank, triple-support “GOATS” compositions, both teams excel, but Vancouver is in a league of their own. Vancouver held San Francisco on the first point thanks in part to their own prowess and also some slightly too big-brained plays from their opponents. At one point, the Shock’s tank Matthew “Super” DeLisi appeared to Earthshatter at nobody, wasting a crucial ult.

In a stream afterward, Super broke down his thought process, reasoning that Vancouver had to rush the point to stop SF from taking it and would need to come out of a specific doorway to make it happen. He aimed his ult where he thought they’d end up. Then they crashed down from the high ground.

On offence, Vancouver brought out the big guns in the form of a DPS-centric composition and took the map without too much trouble. This put them in the lead at 2-1. Unfortunately for the up-and-coming aspirants of the OWL throne, that would end up being Vancouver’s last map win. Over the course of the next two maps, San Francisco methodically beat the Titans down to size, snatching a close overtime win on the fourth map, Watchpoint Gibraltar, and once again denying Vancouver a single point on the fifth map, Oasis.

The sixth and final map, Blizzard World, was a chef-kiss-emoji-worthy performance from SF. Any time it seemed like Vancouver was gaining ground, SF’s star players rose to the occasion. For example, on attack, Vancouver nearly took the first point with a healthy amount of time in the bank. But SF’s Zarya player, Jay “Sinatraa” Won, wasn’t having any of it. He near-miraculously managed to build from zero to full ult charge in a hair over 20 seconds, using an absolutely clutch Graviton Surge ult to help the other remaining member of his team mop up the remaining members of Vancouver in a team fight they had no business winning.

Ultimately, Vancouver was unable to make much progress, and San Francisco snatched up the map and the match, handing Vancouver their first loss ever as an Overwatch League team. It was an emotional moment, with San Francisco’s members linking arms on stage to form a Beyblade of overjoyed hugs. Meanwhile, just across the way, Vancouver’s Bumper sat with his head in his hands, on the verge of tears.

It was inevitable that even the unstoppably mighty Titans would someday lose, but that didn’t make it sting any less, especially in a league where staying on top means somehow out-practicing and out-working 19 other teams full of players who are also being worked to the bone.

This still sets up a rivalry for the ages. Or at least, for the next handful of months. Will Vancouver, now having tasted defeat, be able to bounce back at full power? Will San Francisco, having finally made it to the top of the mountain after a middling first season, be able to maintain their motivation and momentum for the rest of season two? And will these two teams collide a third time during the stage three playoffs in July? I have no clue, but in a season that’s had quite a few ups and downs in terms of entertainment value, this back-and-forth promises to remain a high point.