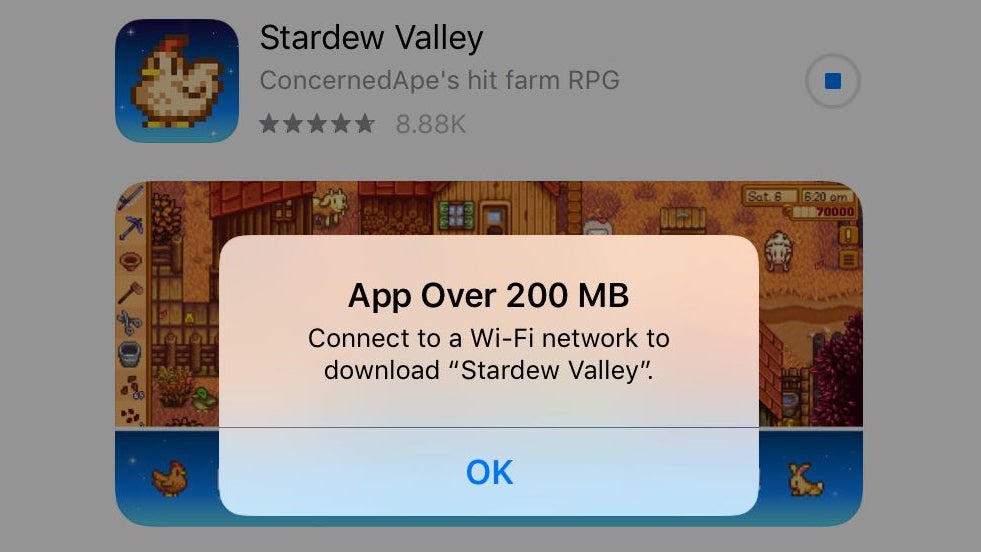 Apple’s annoying 150 megabyte data cap for downloading apps and games over mobile connections is 50 MB less annoying this week, but still doesn’t give phone owners the option to ignore it. So, yay, but also boo.

Finding out a cool new game has been released on the iTunes App Store, purchasing it, and then having the “App Over 150 MB” message pop-up urging you to connect to a Wi-Fi network before you can play is frustrating.

As of this week, as reported by 9 to 5 Mac and confirmed by me trying to download Stardew Valley using mobile data, the message has changed, but the frustration stays the same.

I have unlimited mobile data. A lot of people do. I would really like it if there were an option to ignore the app overage message, either through settings or an additional option in the dialog box.

But hey, congrats to people downloading games that were between 151 and 200 MB. And to the developers who can now make their apps’ initial downloads a little bit larger before the game is launched and a couple of gigs of additional data is downloaded over mobile networks anyway.