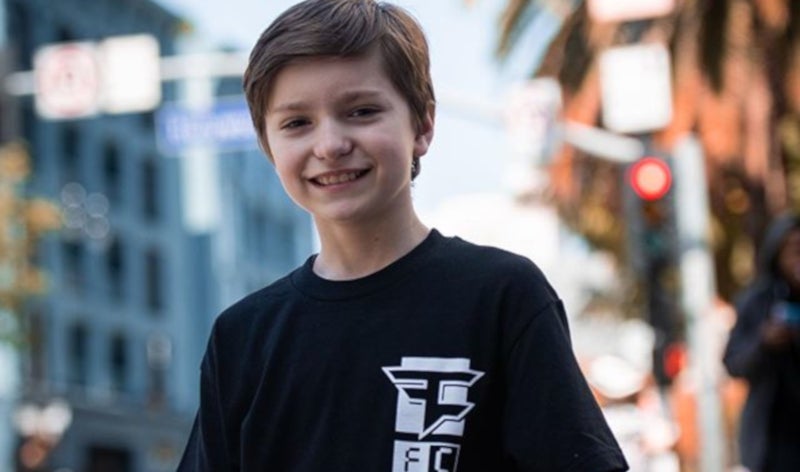 H1ghSky1 (Image: FaZe Clan)
To sign up for our daily newsletter covering the latest news, features and reviews, head HERE. For a running feed of all our stories, follow us on Twitter HERE. Or you can bookmark the Kotaku Australia homepage to visit whenever you need a news fix.

A pro Fortnite player signed to the esports organisation FaZe Clan, who was recently banned from Twitch for being under the age of 13, has admitted that he is, in fact, 12 years old. The streamer, named Patrick, aka “H1ghSky1,” has now moved his stream to YouTube, with his mum occasionally supervising on camera.

The controversy over Patrick’s age came to light as part of a lawsuit brought against FaZe clan by fellow streamer Turner “Tfue” Tenney. Tenney said that the esports organisation had signed a player when he was just 11 years old, two years too young to be streaming on Twitch or playing in official Fortnite tournaments.

Earlier this week, H1ghSky1’s Twitch channel got suspended. Yesterday evening, he began streaming on YouTube, where he finally fessed up.

“My Twitch account was suspended due to me being underage,” he said during his first YouTube stream. “And yes, I am 12. I only lied so that I could fulfil my dream of being a streamer. It’s been my dream for a long time, and I worked for a year and a half for it … I’m sorry. I had to lie. I was too young, and it held me back. I just couldn’t wait two more years.”

All the while, subscriptions and donations poured in. His YouTube channel now has nearly 900,000 subscribers, although he gained most of them prior to yesterday’s stream.

H1ghSky1’s mum, who supervised the entire stream and occasionally appeared on camera, said that her son had actually been using his older brother’s Twitch account, and that she and their father supervised those streams as well.

However, H1ghSky1 participated in plenty of Twitch streams where this was not immediately evident, and even if it was, he’d still likely be in violation of Twitch’s 13-and-up policy unless his parents were the main ones hosting the stream.

Kids under 13 can be featured solo in YouTube videos, but YouTube doesn’t let anyone under 13 sign up for an account, which is why the H1ghSky1 account has fine print noting that its “uploads and videos are created by the management team and Patric’s Guardians.” Earlier this month, for unrelated reasons, YouTube put restrictions on children live-streaming without supervision, hence H1ghSky1’s mum being present.

H1ghSky1 said on the stream that since this is his first infraction on Twitch, his account is just suspended, not permanently banned. However, given that resuming streaming on Twitch while he is still 12 would pretty much immediately earn him another angry red mark on his record, he’s going to stick to YouTube for now.

“Well thank you, Twitch,” he said. “It was fun while it lasted.”

While H1ghSky1 has finally cleared his conscience and gotten right with Twitch’s terms of service, the revelation leaves FaZe in an awkward spot, given that one of its players was younger than the age cutoff for Epic’s Fortnite tournaments. Previously, H1ghSky1 took home a total of $US5,000 ($7,167) from two official tournaments: last year’s Winter Royale and this year’s Blackheart Cup.

On top of that, Tenney’s lawsuit alleges that the organisation not only lied about H1ghSky1’s age, but also “pressured the minor and his family to do so.” In the world of esports, sponsorship deals involving influencers are increasingly central to the way teams make money, so FaZe has a vested interest in picking up and monetizing talent. Kotaku reached out to FaZe for comment, and were provided with the following statement:

Following an Epic investigation and player admission to falsifying age information, we have disqualified a Fortnite competitive player from the events that the player had participated in, including any prize distributions. We are updating Fortnite World Cup leaderboards accordingly.

In the meantime, H1ghSky1’s mum, who definitely at least had knowledge of what her son was up to this whole time, mostly just seems proud.

“You are my genius,” she told her son after he finished his confession. “You are young, and you are a genius. You are amazing.”